Lenz’s DNA was radically restructed in a experiment designed to create the ultimate human. Instead of creating perfection, it reawakened some previously extinct genetic code within his body, mutating him severely. As a result, Lenz’s gained superhuman strength, resiliency to harm, clawed fingers and prehensile feet.

Moreover, the experiment awakened previously buried but extremely potent mental abilities within Lenz. He is capable of staggering mental blasts of pure psionic  force. These are capable of shutting down a mind directly or affecting the physical environment around him.

He is also capable probing the minds of those who surround him, ferreting out their secrets and using them to his advantage.

Finally, Lenz is a genius scientist with a particular knack for genetics and teleportation technology.

Sometime during the XXth century, Lenz was a human scientist that worked for the corrupt terrorist organization A.I.M. (Advanced Idea Mechanics). He volunteered for an experiment that was designed to genetically engineer the ultimate human.

But instead of becoming the resounding success that the group hoped, the procedure accidentally reactivated some extinct genetic code within Lenz and transformed him into a monster.

(In hindsight, it is possible that Lenz had some level of Inhuman ancestry.)

When confronted with the results of their experiments, A.I.M. attempted to destroy Lenz. Lenz managed to escape their clutches, wreaking havoc upon them all as he escaped. But he immediately realized that he had become something unique in the world. A species of one. Like any other organism on the planet, he feared extinction. 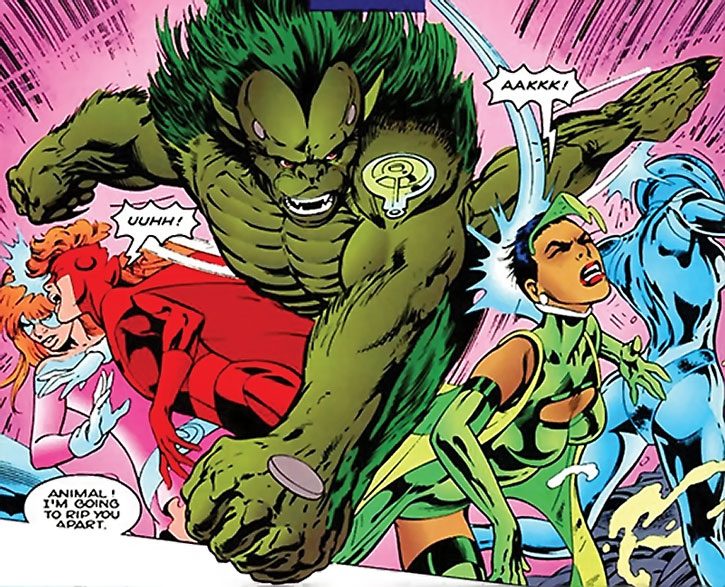 Lenz became consumed with the thought that he needed to reproduce himself. He attempted to do so by infecting several humans with his own DNA. The resulting hybrids, were only partially successful. While they exhibited much of his physical and mental traits, they were genetically unstable and extremely fragile.

Lenz searched desperately for a way to address their weakness and in a single moment, his prayers were answered.

Lenz discovered that a scientist named Griffin had created a unique device, the Gryphon. It was designed to stabilize the genetic structure of any who came into contact with it. Desperate and fueled with hope, Lenz’s followers broke into Griffin’s lab.

Both Lenz and Griffin’s forces were fully engaged in chaotic battle, when two small yet colourful shapes interjected themselves in the situation. They shapes resolved into two gaudily dressed children who not only broke up the fight, but took the Gryphon for themselves.

Enraged, Lenz searched the scene of the battle for some clue to the young thieves’ identity. He found custom made pink cape that was torn off the girl and after a brief examination, discovered a simple label that was sewn into the fabric of it.

Reasoning that the designer of the cape had to know the identities of the children who dared to steal from him, Lenz sent his minions to retrieve her.

The label led to Kay Cera, aka Jasmine “Cuckoo” Destine. After a brief battle (which ended with her physical death) and search of her belongings Lenz discovered an entire family of strange super powered beings. Lenz knew that one of them had to know of the children and his Gryphon.

In a cold methodical manner, Lenz sent his minions over and over to attack the family, searching for the Gryphon. This resulted in the death of several of the family members.

Eventually, one of Lenz’s minions, Lazlo, found the boy that stole the Gryphon and kidnapped him. This brought the rest of the family into Lenz’s lair itself with the Gryphon in tow. A brief battle broke out, and Lenz singlehandedly defeated each and every member of the Clan Destine.

Before he could end their existence though, a strange mortal man appeared in their midst, claiming to be the intruders’ father and threatening his life.

In a rage, Lenz attacked the being called Adam, hurling his considerable physical might against him. When that failed, he attempted to destroy him with pure psionic force. To his chagrin, Adam weathered his most powerful attacks, utterly defeating him. 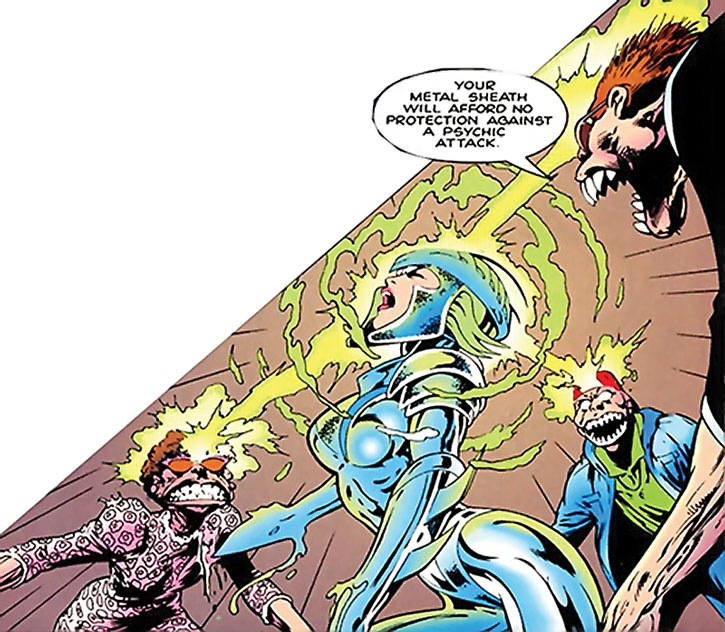 Lenz surrendered and awaited his execution. But, to his surprise, Adam released him after telling him that their conflict was over. Lenz, looking into Adam’s eyes, realized that if their conflict were to continue that Adam would kill him without mercy.

At that, Lenz activated his teleportation circuitry and disappeared. He has not returned to trouble the Clan since.

Lenz is a massive, green humanoid figure with long mane like green hair that flows from his head down to his shoulders. Green hair also covers his forearms and nether regions.

His face is decidedly human like but possesses ape-like animalistic qualities. Long canine teeth extrude from his mouth when he is angered, and his red eyes flash with an inner light at all times.

Two oval shaped disks sit at his temples on either side of his head that glow and burst with visible red energy whenever he uses his mental powers.

Lenz is a genius with a singular focus in life. He is obsessed with finding a means to successfully propagate his species. While he won’t kill for pleasure, anyone that impedes or threatens to stop him from achieving his goals will be summarily executed and promptly forgotten.

His usual tactic in battle is to send his foot soldiers in first to assess his enemy’s strength while he sits back in the shadows and watches. He then quickly deduces several countermeasures and waits for the best moment to strike, most often from the rear and without mercy.

“The intentions of man have always been thus… to kill that which is different.”

Cuckoo: “This is what you want … the Gryphon. Take it.”
Lenz: “What new deceit is this ?”
Cuckoo: “No … we came in peace.”
Lenz: “Your actions belie your words, telepath.”

“Boastful human, my prowess far exceeds that of my progeny.”

Adam: “Now, submit.”
Lenz: “Never. Humankind is a corrupt disease rushing to extinction. I am the future.”

The Clan Destine is such a minor group within the Marvel Universe, they could conceivably be inserted wholesale into the DC universe with very little modifications to their backstory.

Lenz himself could have been created by Intergang or Professor Ivo or even been one of Luthor’s experiments.

Bonuses and Limitations:
Mind Probe has no range.

Drawbacks:
CIA toward Propagation of his Species, Strange Appearance.

Lend Me Your Strength

Lenz has the unique ability to absorb the lifeforce of his followers in order to enhance his already prodigious mental strength.

For every one of his followers that willingly surrenders their strength to him, Lenz gains 1 AP in a Power Reserve to be used immediately. This Power Reserve has an upper cap of 10 APs and can only be applied to Lenz’s Mental Blast power.

Children of the Beast

Lenz, like most organisms on this planet, is driven by a biological need to reproduce his genes and continue his race. As the sole member of his species, Lenz was driven to achieve this via unorthodox means. He kidnapped normal humans and spliced his own mutated DNA into their bodies.

His actions created a hybrid species of mutated human that were physically powerful but genetically unstable.

Any physical damage to these beings results in total cellular breakdown causing their mutated bodies to disintegrate. At any one time, Lenz has anywhere between 25 to 50 of these creatures surrounding him. 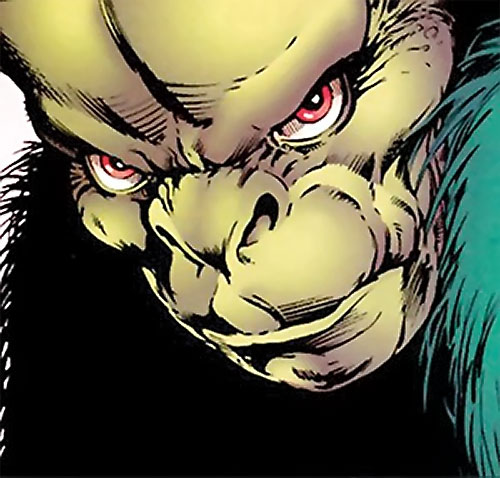 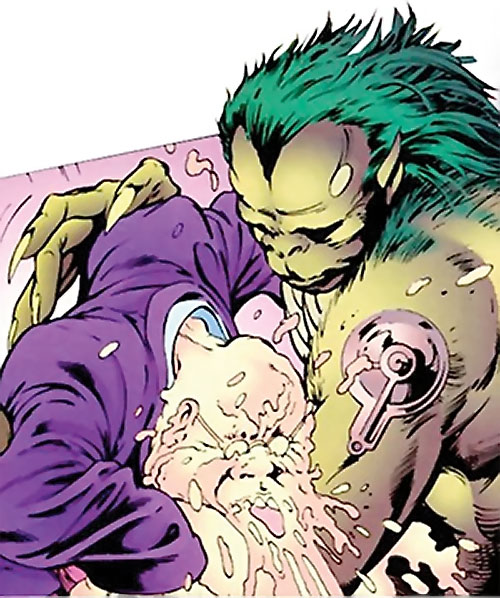 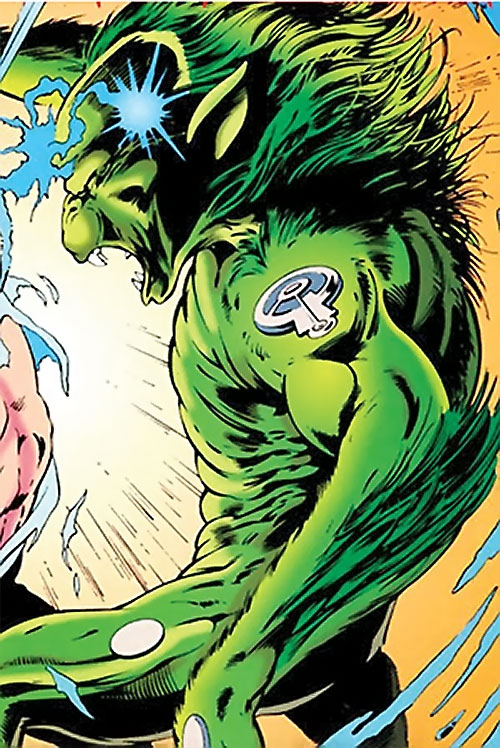 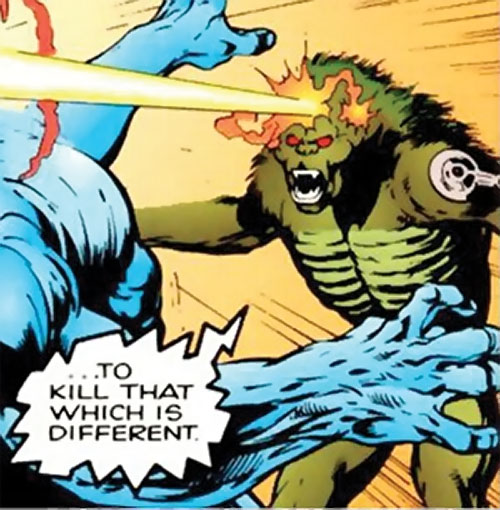 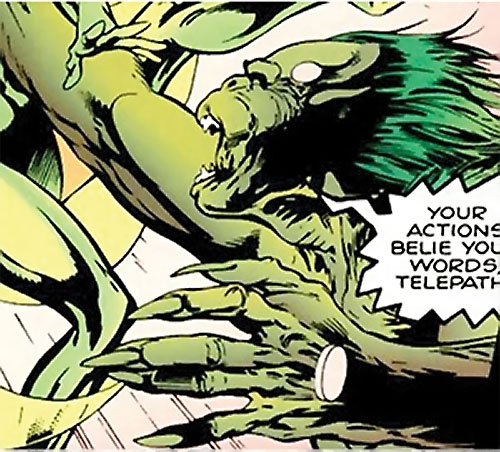 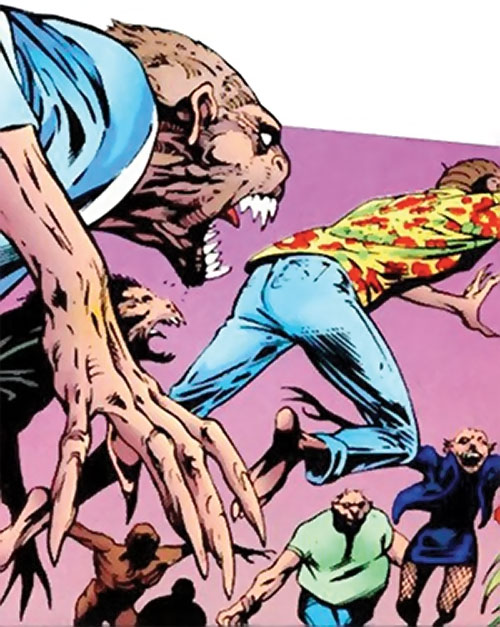 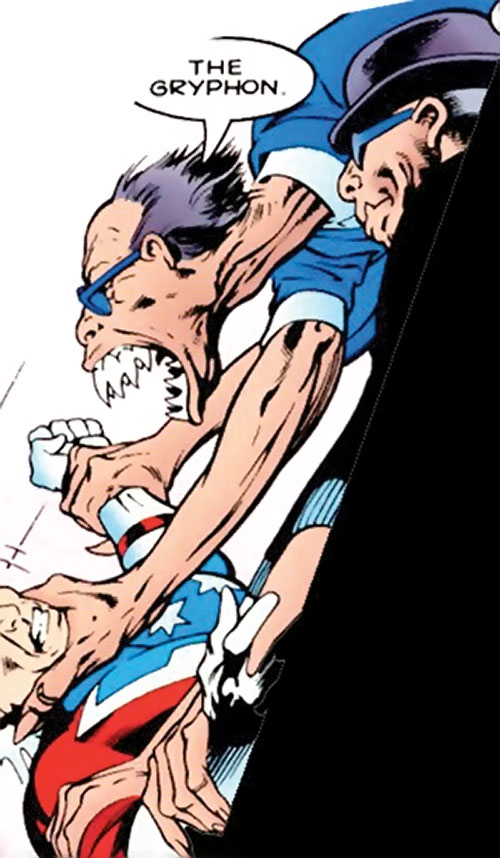