Resident Evil (titled Biohazard in Japan) is a landmark series of Japanese video games and CG movies that started in 1996. It was hugely successful – although some sequels are poorly regarded.

These usually are zombie stories, though the theme was less overused in 1996 than during the 2010s.

Early games in the series exemplified the “survival horror” genre. That involves facing deadly menaces and horrific events while being vulnerable and at a disadvantage.

As to Leon, he is an extremely popular character – and an obvious fan favorite.

This profile includes S P O I L E R S. Up to and including the just-released-as-of-this-writing Resident Evil Infinite Darkness.

(Our contributor Tom played the game in Japanese, so there are some discrepancies in names, spellings, etc.. For instance I think that STRACOM was localised as D.O.S.. So y’all keep that in mind if you played the game in English — Ed.)

We’ve broken down this long article into three short articles, so that readers using smartphones won’t be scrolling forever. 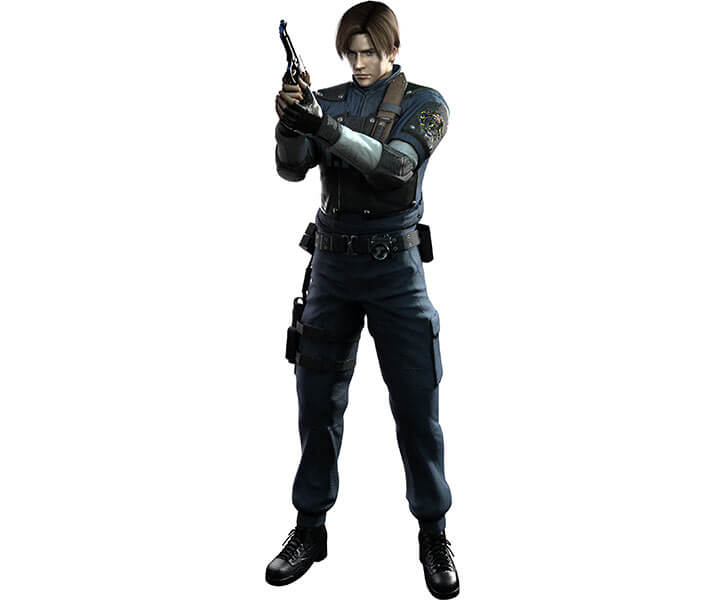 Therefore, a competent namedA character with more narrative immunity than nameless extras police officer, such as Leon, could survive these nightmarish scenarios… provided they:

However, the stories became more and more spectacular.

Leon’s abilities increased to meet the bigger challenges. He eventually reached the cinematicThe level of power and (un)realism found in a spectacular action movie. action hero level. And a few games later, by the late 2010s, he has become on par with legendary costumed comic book characters. Here are examples. 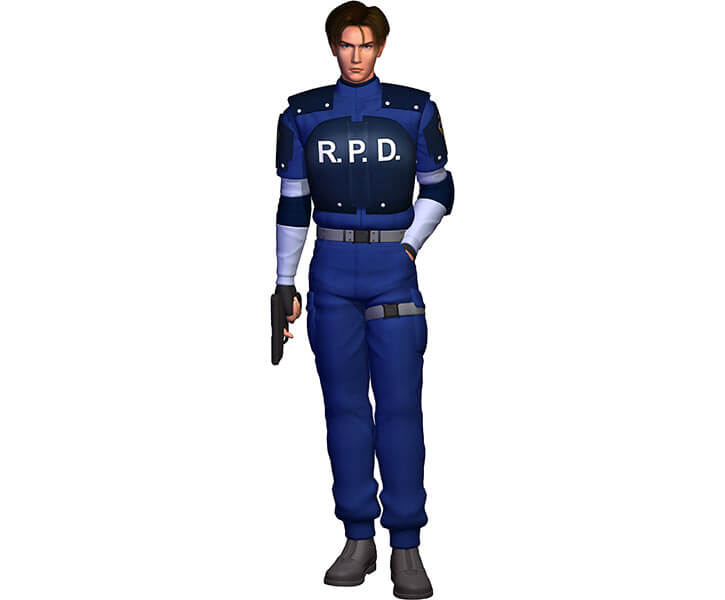 (In DC Heroes RPG terms, such feats of strength are done with Hero Points, rather than requiring a manifestly superhuman Strength score). 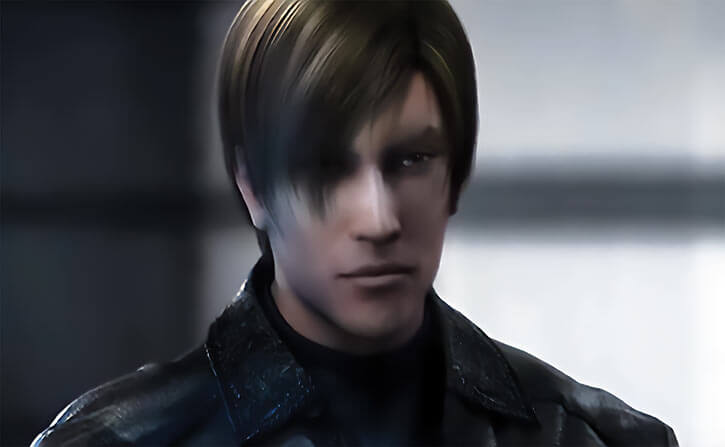 Unsurprisingly, Leon excels at destroying zombies. He can clear out a narrow corridor with a dozen undead without getting bitten.

To accomplish this, he usually performs — in DC Heroes RPG terms – a Lay Back Maneuver. That is, he jockeys for position and is constantly moving. He’ll often get up close and personal – but in a defensive manner to keep himself from getting overwhelmed.

With those tactics he can slowly, but surely wipe out the mob with headshots.

He rarely attacks multiple targets at once, so he doesn’t have any special bonus for that. And though has been seen dual-wieldingUsing two weapons at once, one in each hand firearms, this doesn’t seem to make him any more effective. Unlike, say, his frequent partner Claire Redfield.

It should also be mentioned that Leon is a freaking legend within the Secret Service. He may not always be the highest ranking agent, but he’s generally the go-to guy for BOW incidents.

(Biological Organism Weapons (BOWs) is the Resident Evil term for mutated zombie monsters. These are normally created using the T-Virus or its variants.)

By extension he’s got some impressive contacts including the ear of the POTUS through multiple administrations. It wouldn’t be unreasonable for him to be granted an audience with any politician in the US on short notice – or even allied countries. 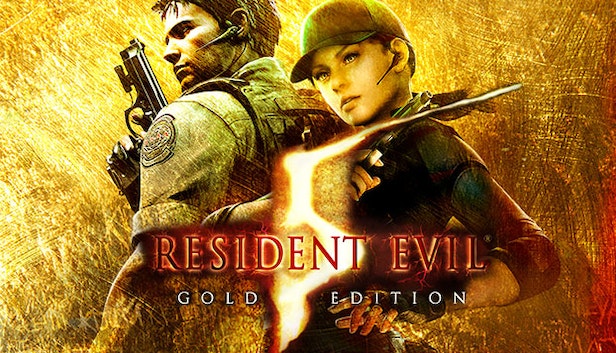 Leon graduated the police academy at 21. He immediately requested a position in Raccoon City, to investigate the bizarre murders that were rumored to be taking place. Since no one else wanted to be anywhere anything that creepy, his transfer was swift and sudden.

However, he had never told his girlfriend about this. She angrily broke up with him.

On his way to Raccoon City, Mr. Kennedy stopped at a hotel to drown his sorrows. But he passed out and overslept. He therefore arrived a day later than scheduled – on September 29th.

On his way into town, he passed through a destroyed National Guard barricade. For by the time Leon arrived, most locals had already been killed and turned into zombies.

There are two different accounts on what happened next. Since the exact events depend on which character the player picked.

In both cases, Leon drives them to the police station to find answers. However, an out-of-control gas tanker careens at them. Claire and Leon have to bail out and find themselves separated – and low on ammo. 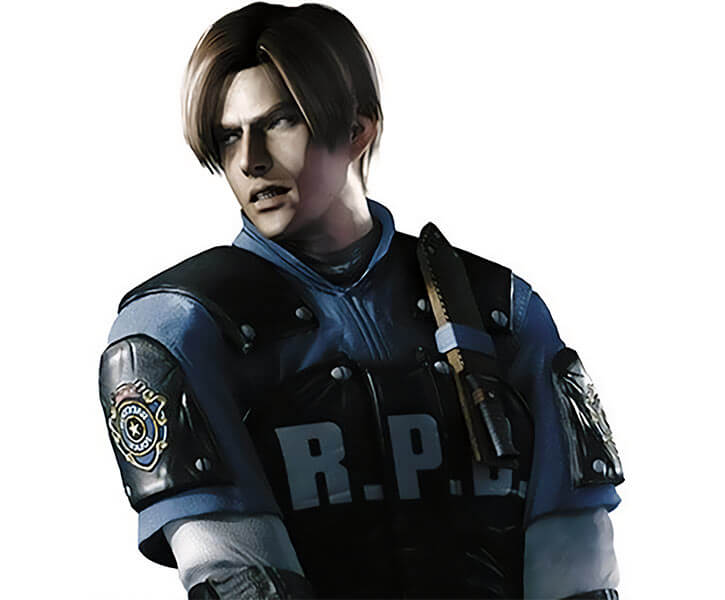 Leon made his way into the barricaded police headquarters, if only to take refuge from the undead. He eventually found Lt. Marvin Branagh. Marvin was lying wounded in a locker room after being bitten by a zombie.

Lt. Branagh would have been Kennedy’s commanding officer under better circumstances. Leadership had fallen to him after Police Chief Brian Irons had disappeared – and all other superior officers had been wiped out.

The Lieutenant had rallied the remaining officers under his command and plotted a daring escape. But their plans went awry. Only Brannagh was left now, and he knew he would turn soon.

By this point, Leon was so disheartened that he contemplated suicide.

The vintage trailer for the vintage game. The resolution is vintage, too.

Officer Kennedy then crossed paths with a young girl name Sherry Birkin. This gave him a renewed purpose to stay alive – and protect his young charge.

Shortly after that he happened upon Ada Wong. Who, depending on which path was taken, claimed either to be in search of her boyfriend – or to be an FBI agent.

The group then made their way to the basement jail. They hoped to find imprisoned investigative journalist Ben Bertolucci.

Bertolucci confirmed that he had uncovered a conspiracy between the Umbrella Corporation and the local police. The goal was to test illegal bioweapons.

The journalist seemed nervous, like he had an ulterior motive. And his story seemed too far flung. They therefore decided to leave Bertolucci in his cell while they verified his story, but he was killed shortly after they left.

The basement had been heavily damaged. This had opened up a pathway to the sewers. The group decided to explore that as a viable way out.

In so doing, they were separated. But Leon discovered a way into Umbrella’s secret underground lab. Ada having injured her leg, he had to investigate alone.

While rifling through documents, Leon found files about Ada. She was an international spy for hire – and was likely there to steal research from Umbrella.

He confronted her, but an explosion collapsed debris upon her. Just before she appeared to die, she apologized for deceiving Leon.

Mr. Kennedy eventually got the emergency elevator to work. That led to a train that was their ticket out of this nightmare. 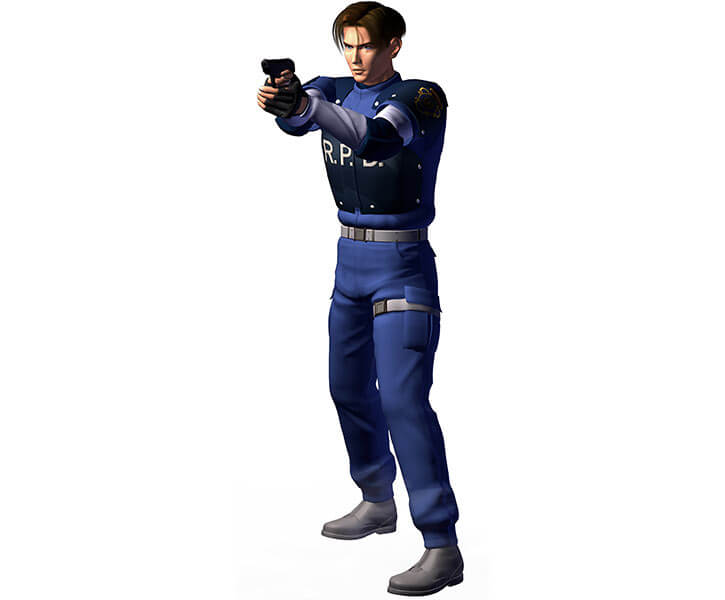 On the way out Leon was confronted by William Birkin, Sherry’s father – and the lead researcher on the project. He had essentially been patient zero for the outbreak, and was thus heavily mutated.

After Leon emptied a ton of ammunition into the mutated scientist, he seemingly slew him. But Birkin further mutated and came after him again.

Desperate and running out of ammo Leon was prepared to meet his maker. But a mysterious savior suddenly appeared. Though her face was hidden in shadows, it seemed to be Ada.

She tossed him a rocket launcher and told him to survive. Leon used it to blow the creature to Hell.

Leon, Sherry and Claire then got the train running.

However, a grotesquely mutated creature (likely William Birkin) followed them. They fended this writing mass of tentacles off in pitched battle, then triggered timed explosives. The monster was taking up an entire boxcar, but the explosion sent the car careening and killed it for good.

The pair also managed to give Sherry a vaccine against the experimental Umbrella viruses she had been exposed to.

Shortly after their escape Leon and Claire parted ways.

Interrogated about the events of Raccoon City, Leon told the truth. He just omitted Claire’s involvement to protect her.

The government eventually offered Mr. Kennedy a position on their newly formed STRACOM (Strategic Command) covert unit. Having survived the events of Raccoon City, he seemed like the ideal candidate. Leon took the position once it was agreed to provide care for Sherry.

STRACOM was highly classified, and under direct presidential oversight.

Meanwhile Claire was captured by Umbrella and taken to their island prison of Rockfort Island.

She escaped, but couldn’t get off the island. Still, she now could email Leon for help.

While Kennedy couldn’t abandon his current assignment, he could track down Claire’s brother Chris. Who was able to evacuate her. 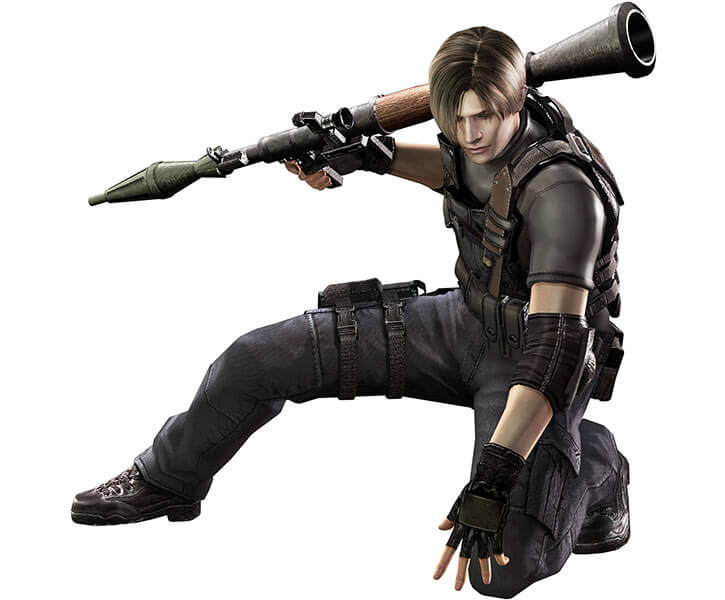 This profile continues in its second third.