Bonaparte is a strange mini-tank, about the size of a van. It was built from pieces salvaged from Brenten’s Tiger Special Tank. It is thus made of Chobham steel  instead of bio-plastics. Bonaparte is powered by an hydrogen fuel cell and weights somewhere between 5 and 10 tonnes.

This compact vehicle nonetheless has four tracks. All are articulated, so Bonaparte can perform daring maneuvers such as :

Bonaparte’s sensor suite is quite complete, Blue Thunder -style. It can use its comms to link up with cameras on observation blimps above the city. But of course, most of the time, the bacterial cloud is too thick for this to be useful.

Bonaparte’s weapons systems include a stubby (well, sawed off, really) 75 or 105mm gun. It can fire :

In the rear turret is a 12.7mm multi-barelled machinegun, which can fire live or rubber ammo (Projectile weapons). It has the necessary targeting computers to shoot down incoming anti-tank projectiles (Force shield). Of course, it has smoke projectors (Fog).

Bonaparte follows the US tradition of naming tanks after famous generals. The joke being that Bonaparte was short, and proved himself, among other things, a master of urban warfare and riot control.

It was built by Al and Leona in remarkably short order, and they’re still tinkering with it.

The intro sequence and theme song.

Dominion Tank Police takes place in a near future in the city of Newport City. In this time, the air pollution as raised to such a level that the pedestrians must constantly wear breathing masks to limit the effects of a permanent bacteria cloud.

Most of the population is already affected by its ill effects (but the extent of these effects are not described). The crime rate is so high that a crime occurs every 30 or so seconds.

Osaki is originally from the Motorcycle Patrol, but was later transferred to the Tank Police. She is the only woman on active duty in Brenten’s squad, which fairly earned its reputation for knuckle-dragging misogyny.

She was first posted as gunner in Britain’s favoured super Tiger tank, when they ran into Buaku’s gang. As her superior bailed out, she fired to stop fleeing felons. Apparently, the gun’s calibre was not the kind to be embarked in a mobile unit. The recoil threw the tank upside down and ruined it.

However, Leona used the scraps from the Tiger to build her own tank, Bonaparte. This quirky vehicle suited her perfectly, and she found her role.

She now protect Newport from such criminals as Buaku and the Puma Sisters, and blows up an alarming amount of stuff while doing so.

See illo, and duck to cover.

Leona now follows the values of the Tank Police. These include a conviction that : 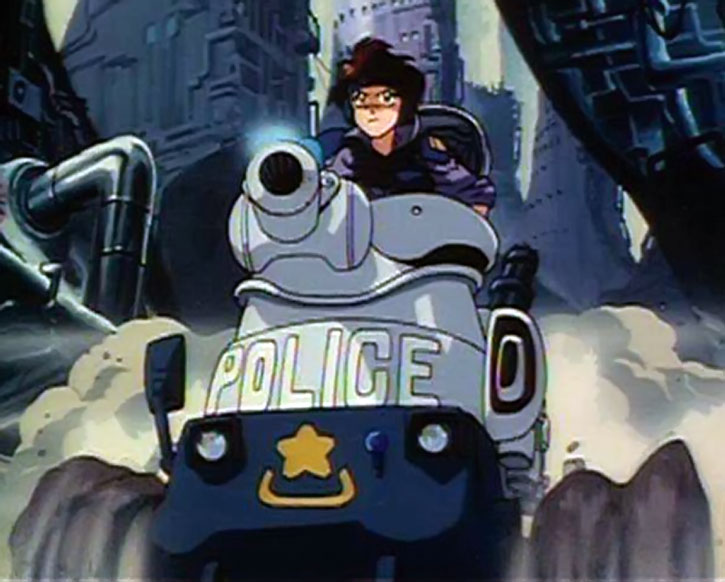 This is in part a result of a sermon she received from Brenten after wrecking the Tiger, as he yelled that only men were able to truly *love* tanks and she would never understand. Osaki threw herself into proving him wrong.

Osaki is hot-headed, impulsive, and has a short temper. She’s quick on the trigger and almost always applies too much firepower to any situation.

Leona was born and raised in Japan, which isn’t the usual case among the Tank Police. She lives at home with her mum and little brother, but prefers to be at the Tank Police H.Q. with Bonaparte.

The Tank Police is a bit extreme, but you may try a variant : a special group of Russian police officers of various heritages with old Rocket Red battlesuits, who was formed after the Russian maffia started use military-grade hardware a bit too often.

They would easily use the same amount of attitude as the Tank Police does, and would be better equipped to fight supers.

Drawbacks:
Serious Rage (Goes up to Catastrophic if Bonaparte is damaged or even badly scratched, with an immediate Rage check), SIA toward cool mechas, MIH of criminals.