The Big Bang Theory profiles cover the first 3 seasons of the series as this is the stretch they’d most likely used as supporting cast for heroes. They all start getting into serious relationships in later seasons which changes the tone of the show and their characterizations.

Leonard is a brilliant young physicist with an extremely high IQ. He is proficient with a wide range of disciplines including history, literature and science and is able to solve a complex crossword puzzle in seconds.

While he often seems insecure, he’s also the most well-adjusted amongst his genius friends and usually serves as their mouthpiece.

Leonard was born to a highly intelligent but unemotional family. His mother was a psychiatrist and neuroscientist, and his father was an anthropologist. They wrote papers on their sexual relationship (which was evidently limited to procreation and included Power Point presentations) and also about their theories on raising children.

His mother conducted experiments designed to stimulate Leonard’s intellectual development in a variety of fashions. She closely monitored his progress with psychological evaluations as well as frequent brain scans. For example, she conducted EEGs while he was potty training.

Their family values were focused on achievements. When the children achieved something was the only time they would celebrate as a family. This limited some of the more common celebrations in the household such as holidays and birthdays. Thus, Leonard had never had a birthday party even as an adult. 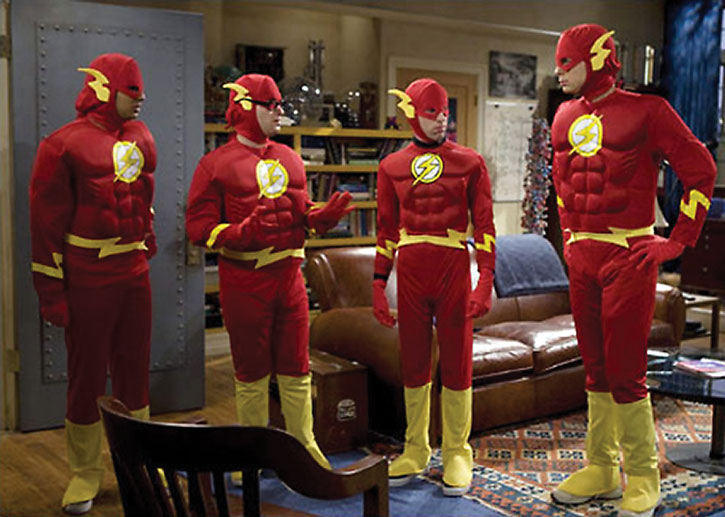 While this seems to have had a powerful effect on his intellectual development (he was in advanced placement classes from a young age and performed well in school), he received very little of the affection needed by a child. By the time he was 10, he was so devoid of human contact he built a robotic “hugging machine” from a dress maker’s mannequin so he could feel what it was like to have his mother hug him.

According to Leonard, his father evidently shared his loneliness since he borrowed the machine occasionally.

Either as a result of his upbringing, or simply because of his natural intelligence, Leonard developed his high IQ. He became a successful experimental physicist. Acquiring his doctorate by the age of 24, he demonstrates proficiency in a wide variety of disciplines including literature, history and science.

Upon receiving a job at Caltech , he answered an ad looking for a roommate which noted, “No whistling.” The ad was placed by Sheldon, a theoretical physicist with quite a few quirks resembling autism. These made it next to impossible for anyone to stand living with him.

However, Sheldon’s lack of empathy and odd habits are reminiscent of Leonard’s mother’s own mannerisms. This seemingly has allowed Leonard to establish a strong friendship with Sheldon as his roommate.

Sheldon’s not that bad

Leonard and Sheldon have become best friends over the years and have made two other friends from amongst their colleagues who share their interests, Raj Koothrappali (an astrophysicist) and Howard Wolowitz (an engineer).

About two years ago, a girl named Penny moved in next door to Leonard and Sheldon. Leonard immediately fell head over heels, announcing “our babies will be both smart and beautiful” to which Sheldon responded, “not to mention imaginary.”

It seems Sheldon knows his friend, since Leonard has done little to woo Penny except in intermittent moments. This is despite the fact that his feelings seem to grow the longer they know one another.

They have been on one date and even came close to having sex on one other occasion, but in each instance either Leonard has said the wrong thing at the wrong moment or Penny has backed off due to her own insecurities.

Recently, Leonard suspected that Penny truly reciprocated his feelings. Sheldon gained an opportunity to go to the North Pole to make some experiments that could possibly prove string theory. This being the opportunity of a lifetime, Leonard chose to join Sheldon as a member of his team.

He considered cancelling his participation and to dedicate the time to pursue Penny, but she encouraged him to go on the trip (admitting to herself that she didn’t really want this only after she was alone).

Leonard is a short, non-descript man with dark hair and glasses. He can often be seen in a hooded sweatshirt-style jacket over scientific themed t-shirts or a velvet retro suit on more formal occasions.

He does enjoy participating in “cosplay,” or dressing in costumes from Scifi and Fantasy genre movies/tv shows, when appropriate (such as renaissance faires, Halloween and conventions), but wears his glasses even in costume.

Leonard is sweet but often sarcastic, especially when Sheldon’s idiosyncrasies wear on his patience. However, he is the glue that holds the gang together. Raj and Howard have even mentioned to Penny that they tolerate Sheldon because they like Leonard. 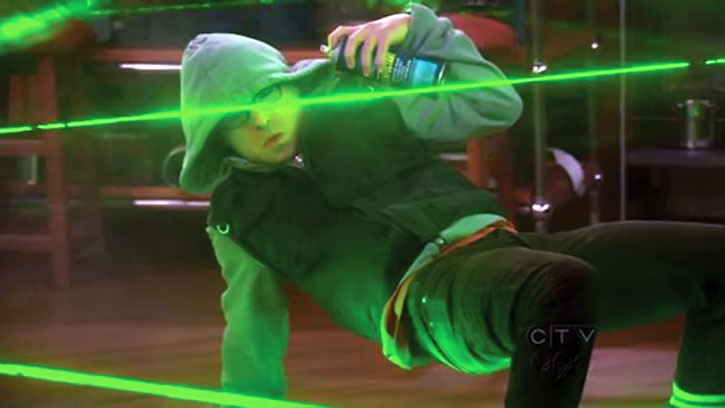 Despite the fact he is a social leader amongst his genius friends, he wants desperately to establish a worthwhile romantic relationship and expand his social circle. He ties much of his self-worth into how he is perceived by others and often bemoans his friends’ social faux pas, especially Sheldon’s.

While he has a vast collection of comic and sci-fi related items, and enjoys such pastimes as playing “Halo” and “Klingon Boggle,” he sometimes finds this embarrassing and has even considered selling off his collection simply due to the negative social stigma outside his immediate friends.

Leonard: “Well, it seems once again you’re caught between a rock and a crazy place.”
Sheldon: “Oh, I hate when that happens.”

Penny: “I didn’t know you played the cello.”
Leonard: “Yeah, my parents felt that naming me Leonard and putting me in advanced placement classes wasn’t getting me beaten up enough.”

Leonard: “The Homo Habilis man discovering the opposable thumb says ‘what.‘”
Kurt: “What ?” 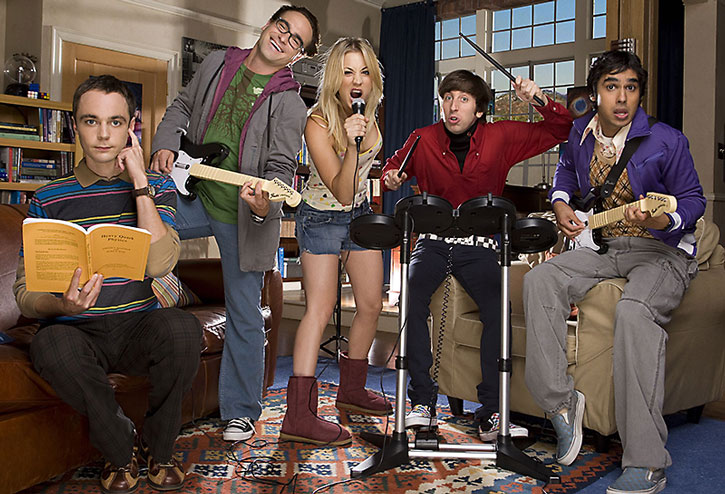 Leonard: “Penny, we make such a good team. Maybe we could enter a couple of Halo tournaments sometime.”
Penny: “Or we could just have a life.”
Leonard: “I guess for you, that’s an option.”

Leonard Hofstadter: “You play a game to simulate adventure, but when there’s real adventure out there in the real world, you guys just wimp out !”
Sheldon Cooper: “Do you not recall the last time we visited this gentleman ? We came back with no pants.”

Penny: “You don’t always have to go along with what the woman wants.”
Leonard: “Huh.”
Penny: “What ?”
Leonard: “Nothing… just re-thinking my whole life.”

[About his first kiss with Leslie] “We tried kissing but the Earth didn’t move. I mean any more than the 383 miles it was going to move anyway.”

[After kissing Penny while dressed as Frodo] “Yeah, that’s right. You saw what you saw. ’Cause that’s how we roll in the Shire !”

The Big Bang Theory cast could be dropped into the DCU as is. They could easily be research scientists at any of the StarLabs. They’d love a chance to examine any superhero to try to figure out what fuels their super powers and hopefully replicate the results in themselves.

Leonard and Sheldon even have a clause in their roommates’ agreement that if one should acquire super powers the other will be their sidekick.

It’s been noted on more than one occasion that Leonard’s lactose intolerance gives him gas so severe that Sheldon believes it could be used as a weapon by the military. In a pure humor genre, this could be Leonard’s superpower.

The gang is sent to the North Pole to study string theory. In the course of their experiments, Leonard gets separated from the rest and stumbles across The Fortress of Solitude. Entering, he witnesses a fight between the man of steel and Brainiac. He manages to contact the rest of the gang and summon them to the location.

Just when it looks like Brainiac has, once and for all, defeated Superman, the gang manage to neutralize Brainiac with their clever use of Kryptonian tech (they have read everything ever written on Superman, after all) while Sheldon distracts him with some meaningless intellectual debate.

Bonuses and Limitations:
Charisma is only usable with someone within academic/geek circles or that Leonard has known for at least two months.

Note:
I am not giving any of the guys the Genius advantage since in the series they are limited to (cutting edge) real world science. However, dropped into a Superhero universe, this would be entirely appropriate for them.

Drawbacks:
Innocent, MIA (Penny), MPR (Nearsighted), MPR (Lactose Intolerant), Guilt (Leonard often deals with guilt based subplots, though their origin is different every time- sometimes even the actions of others), Uncertainty (usually when the gang first sees an attractive woman).

Leonard has a comic collection in excess of 23,000 comics and a variety of mint condition collectibles that his friends referred to as “Nerdvana.” They include such items as Justice League action figures, an original Battlestar Galactica Colonial uniform, and an exact replica of the Kryptonian City of Kandor.

Leonard’s Innocent drawback is based on his idealism rather than true naïveté. While he doesn’t possess the Socially Inept drawback himself, please note that Wolowitz and Sheldon do often share their penalties with him.

Source of Character: As portrayed in Big Bang Theory by Johnny Galecki. 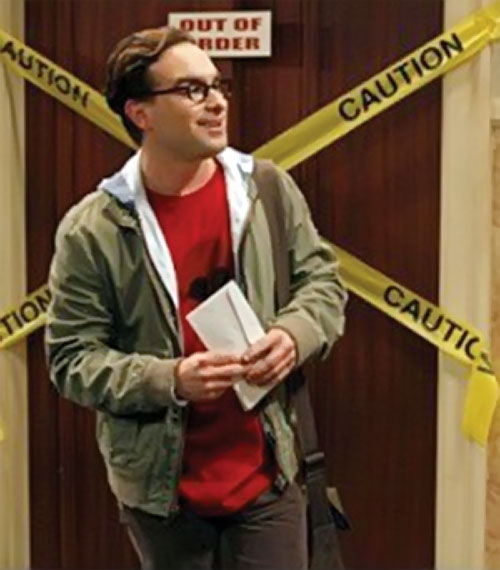 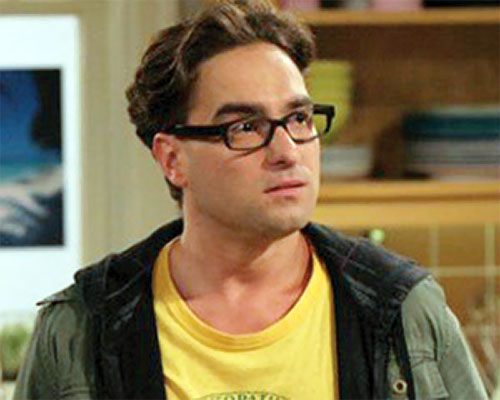 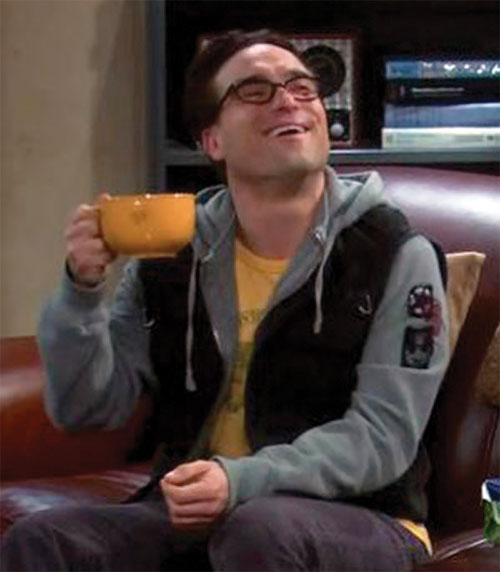 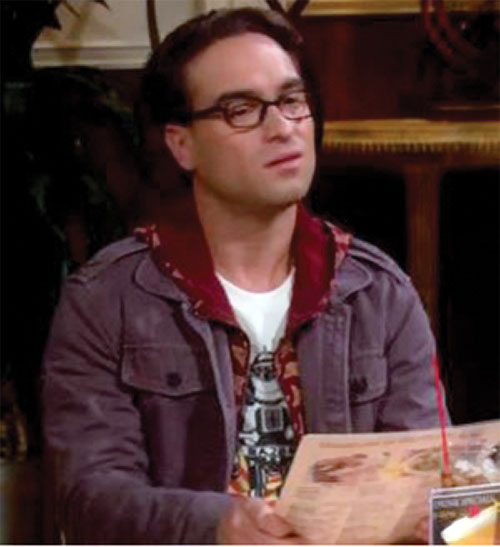 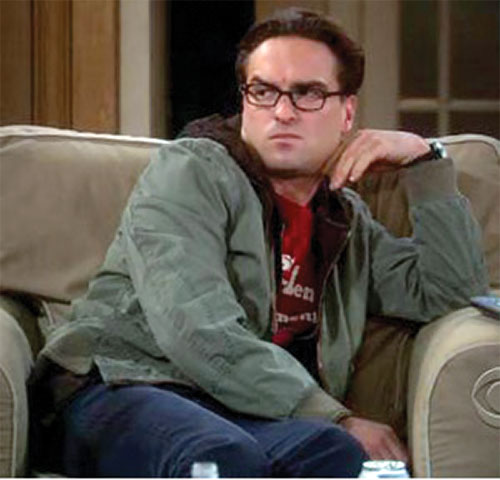 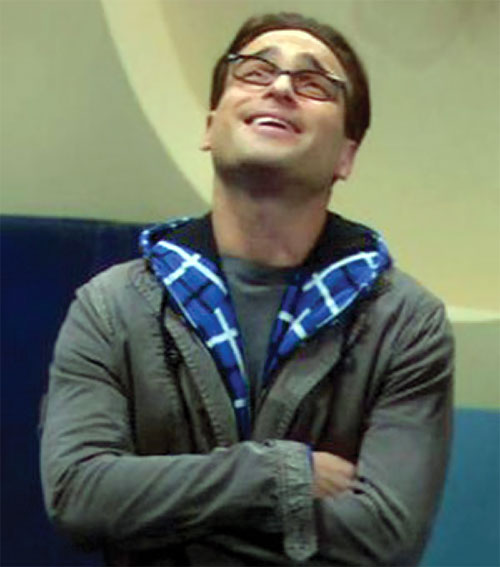 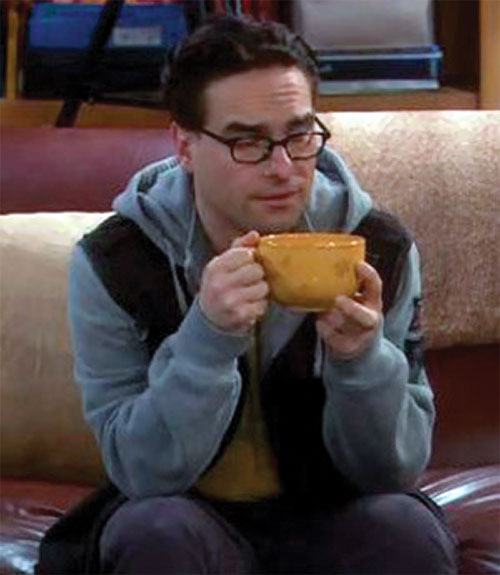 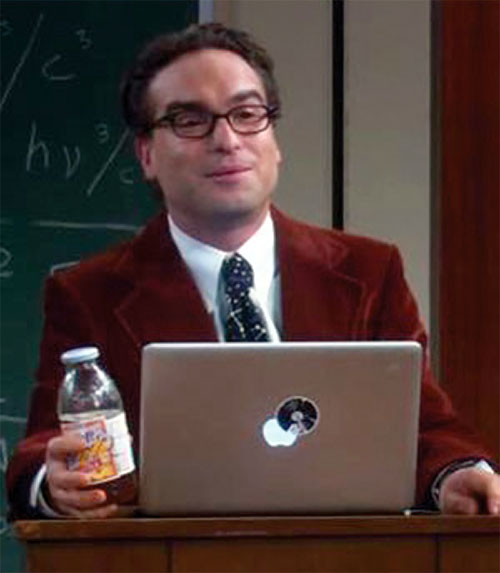 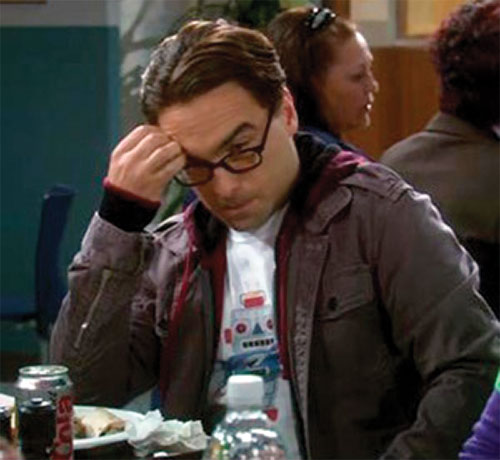 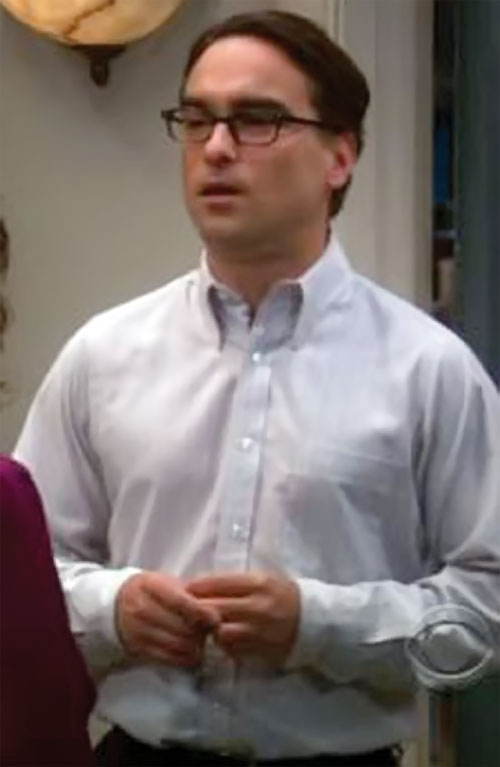 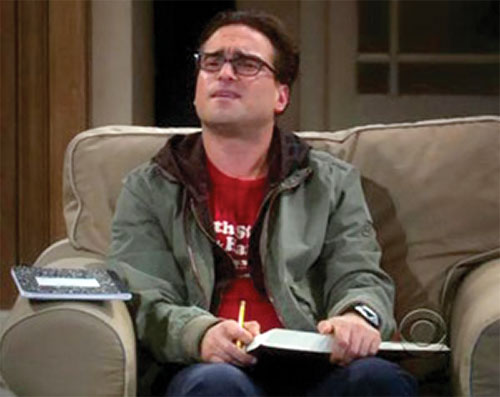 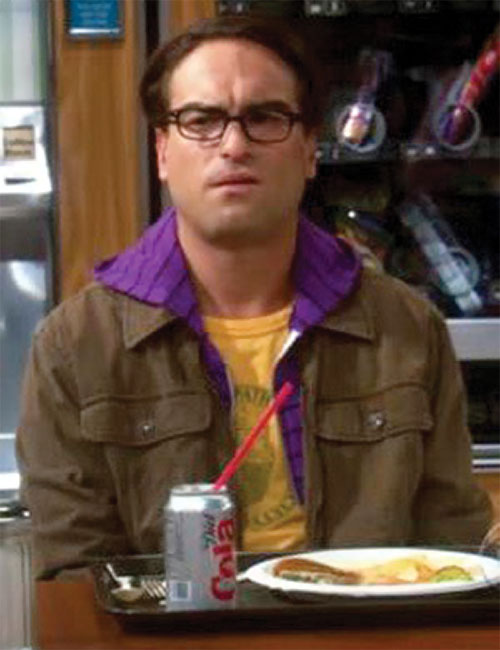 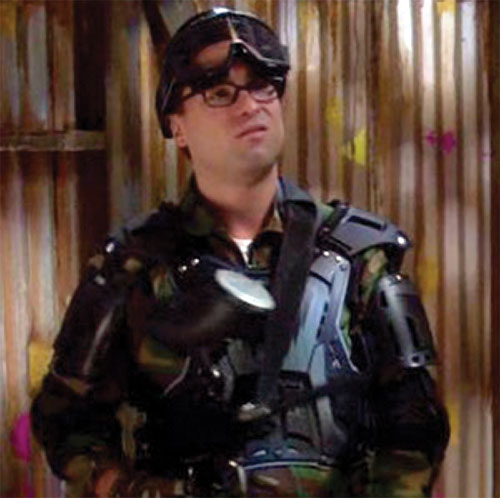 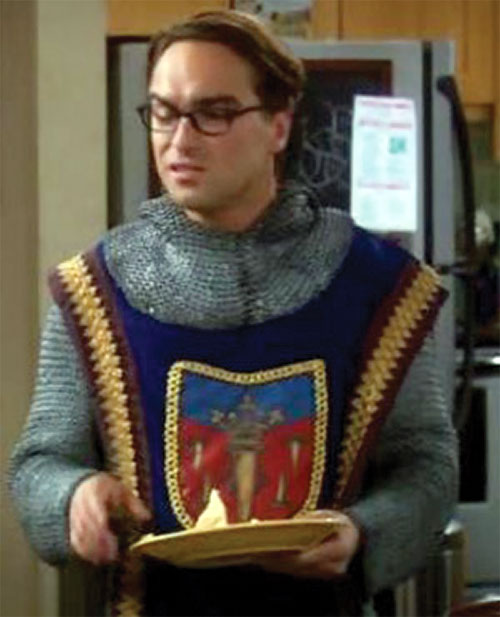