Dr. McCoy was one of the core characters on the original Star Trek TV series (1966-1969), a landmark production in science-fiction. He was in a way the voice for the high-road altruistic, ethical philosophy of the show.

Leonard McCoy is the finest medical doctor of his time. He managed to learn Vulcan physiology on-the-fly and cure a variety of previously unknown ailments encountered by the USS Enterprise during its original five-year-mission. His medical skills are belied by his friendly, laid-back nature.

He also has an innate distrust of technology, and prefers shuttlecraft to “having his molecules scrambled by that contraption,” the transporter.

Short version, with a longer one to follow (maybe).

Leonard McCoy was a medical student when his wife, Jocelyn, left him for another man. Devastated, McCoy enlisted in Starfleet after graduation. He served as Chief Medical Officer of the Enterprise for most, but not all, of James Kirk’s first Five-Year-Mission (2266).

By that first year he had already won the commendations of Legion of Honor, awards of valor, and was decorated by Starfleet Surgeons.

McCoy contracted the always-fatal xenopolycythemia. He retired from Starfleet in 2269 to spend his remaining days on the asteroid ship, the Yonada, and that world’s high priestess, Natira — whom he soon married. By exploring Yonada’s computers, Spock found a cure for xenopolycythemia and McCoy left Natira to return to the service.

Return to the service

McCoy was unknowingly entrusted with Spock’s katra, or essence, shortly before Spock’s death during the Genesis incident. Spock’s katra drove McCoy to a mental breakdown before Kirk could determine what really happened.

Spock’s body was regenerated by the Genesis planet, and his katra was removed from McCoy’s body and placed into his own. After a brief diversion into the 20th century, McCoy served as CMO of the Enterprise-A under Kirk.

McCoy served as CMO through the end of Kirk’s tenure as Captain of the Enterprise-A in 2293. Non-canonical sources indicate he continued to serve as Captain Spock’s CMO on the USS Intrepid after Kirk’s death.

In 2364, the 148-year-old Admiral McCoy (retired) toured the Enterprise-D shortly before her launch. His subsequent exploits have not been recorded, nor has his death.

Leonard McCoy is the classic Southern country doctor, albeit one who happens to work on a 23rd Century starship. He plays up the role of Southern gentleman to the point of sometimes appearing too laid back to be serious, but his devotion to the health of his crew is unwavering and resolute.

Even the captain isn’t safe from his protective nature. McCoy has no qualms about pulling rank and ordering the Captain or First Officer to rest, surgery, or whatever medical attention is necessary. While McCoy is a friendly man, his only close friends are his captain, James Kirk, and Commander Spock.

McCoy’s emotionalism is the yin to Spock’s logical yang, and he enjoys baiting Spock in arguments.

Also, while he is universally known as “Bones” by fans, only Kirk uses this nickname for him.

“I’m a doctor, not a bricklayer !” (after being ordered to heal the wounded Horta beast)

“Jim, I’m beginning to think I can cure a rainy day !” (after healing said Horta beast)

Captain Kirk: “Well Bones, do the new medical facilities meet with your approval ?”
McCoy: “They do not. It’s like working in a damn computer center !”

“Spock, this child is about to wipe out every living thing on Earth. Now, what do you suggest we do… spank it ?”

“Jim, you don’t go around asking the Almighty for his I.D. !”

“I don’t see no points on your ears, boy, but you sound like a Vulcan” (Upon meeting Data for the first time)

“Troubles me ? What’s so troublesome about not having died ?”

By the time of Star Trek II, McCoy is promoted to full Commander and acquires the Age (Old) drawback, with the accompanying Initiative reduction to 15. For his appearance on the Enterprise-D, McCoy has Military Credentials (High, Rank: Admiral) along with the Age (old) drawback. 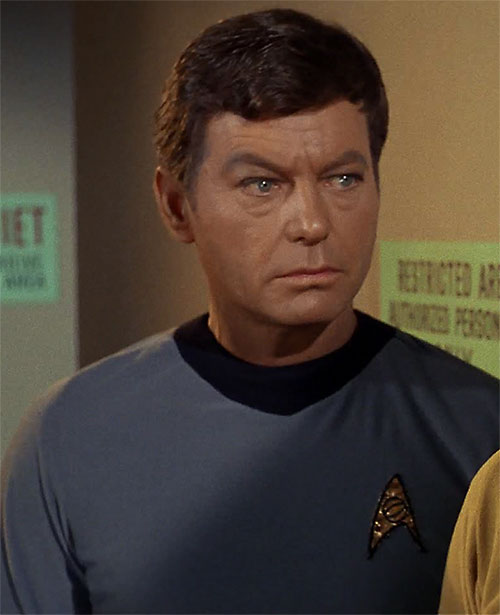 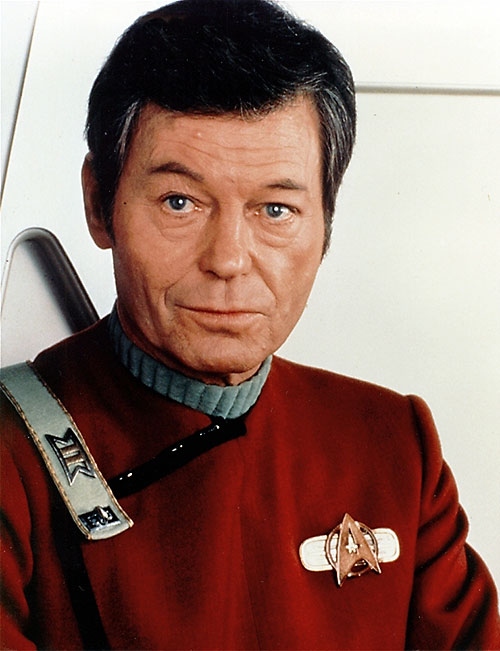 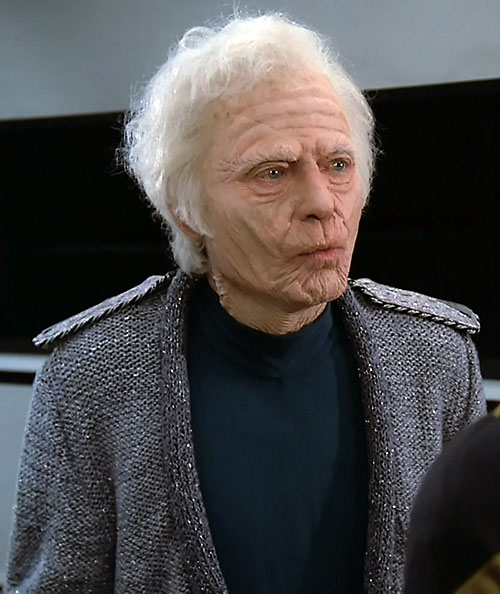