This obscure Spider-Man villain only appeared once, in 1976.

But he’s a simple, straightforward, easy-to-use sort of character. In our book, that’s valuable.

Tallon is an expert safecracker. One assumes that his skills also include handling security systems.

Since his accident, his hands were replaced by metallic cyber-hands possessing great strength. Tallon can thus can slash a 2×4 in half with a clawing attack. Or strangle the superhumanly strong Spider-Man (Peter Parker).

Both Tallon and his henchmen are unusually determined and aggressive. Spider-Man was taken aback by their onslaught, and they landed several telling blows even against him.

During the 1970s, Leroy Tallon was reputed as a master safecracker in New York City.

He was then caught in one of his own nitro blasts and lost both his hands. However, by 1976 they had been replaced by sophisticated cybernetic prostheses. 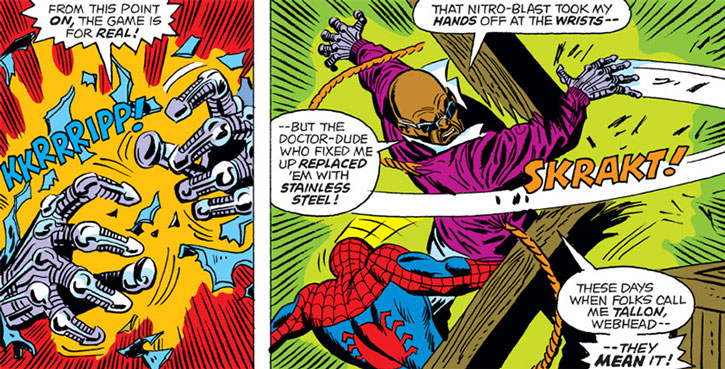 Their provenance is unrevealed. Perhaps he stole them from Stark International (presumably the same lab that built Misty Knight’s arm, and was later headed by Curtis Carr) and had them installed by an underworld surgeon, such as Jonas Harrow.

Tallon and his gang scored big when they robbed the diamond exchange. But they ran into Spider-Man who was investigating an unrelated crime. Thinking that he was onto them, they viciously attacked.

They were nevertheless defeated and left for the police to apprehend.

Leroy Tallon has not been seen since.

A competent and aggressive criminal, who thinks having cybernetic super-hands is even cooler when your last name is “Tallon”. Which I can’t say is wrong.

“Brothers, we pulled the perfect caper last night — an’ if we just keep cool, there ain’t now way the fuzz can pin it on us ! So we gonna split up — stay outta sight until the heat dies.”

Use run-of-the-mill street thugs stats for his gang (from our Stock Thugs and Criminals article). But they’ll have a remarkable 10 Hero Points, and one specialist skill at 4 APs. 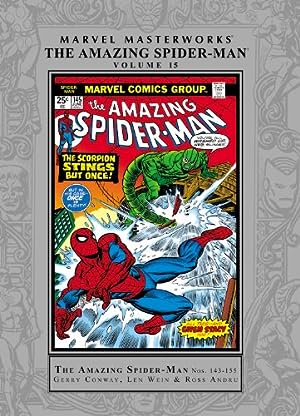