The Trouble with Girls is a comic book series about over-the-top parody of “men’s adventures” power fantasies. It was primarily published from 1987 to 1993.

As with many creator-owned series of that era, TTwG went through a smorgasbord of small publishers. The US comics market tends not to be kind to publishers.

Lester is a force of nature, and a larger than life action idol. He has incredible strength, speed and agility, as well as geometric wizardry and an overwhelming attractiveness to women. His physique seems superhuman.

He is lucky in games and in dating, and it’s almost impossible for him not to succeed. But though he’s preternaturally lucky, he never manages to find happiness in the end.

He has perfect eidetic memory and is capable of recalling, for example, maps that he glanced a few years back. He is also a scholar of the most obscure of subjects and possesses odd and common skills alike. He makes everything look easy, and seemingly is capable of distorting the natural laws in his favor. 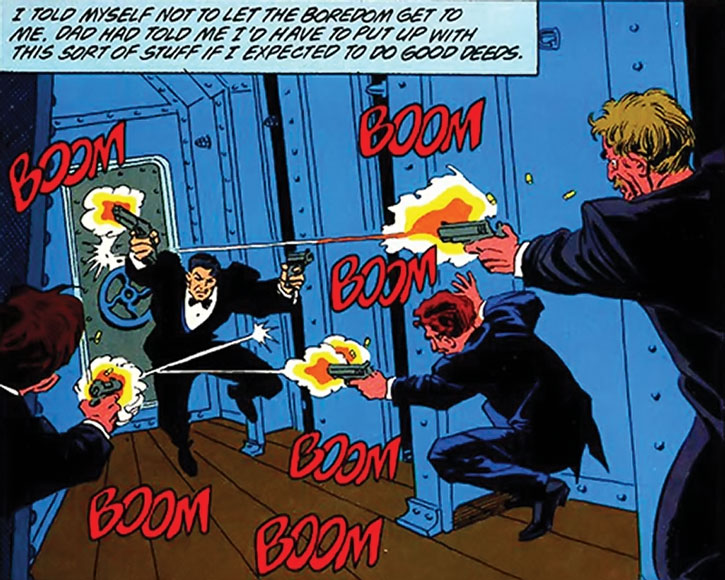 Everybody knows and adores Lester Girls. He is a master of all sports, a perfect driver of any vehicle and is capable of bringing down groups of foes in unarmed or armed combat with little effort. He is a experienced man of the world, and knows more than a few tricks. He is even rumored to know a few mind-reading tricks.

Hallucinogens are known to only sharpen his wits. Lester is perceptive, very adept at mathematics and possesses willpower of steel. He’s reportedly an incredible lover.

He probably possesses many more skills and advantages than are presented in this write-up.

A good overview of the Girls story can be read in this review by Sheri Harper . 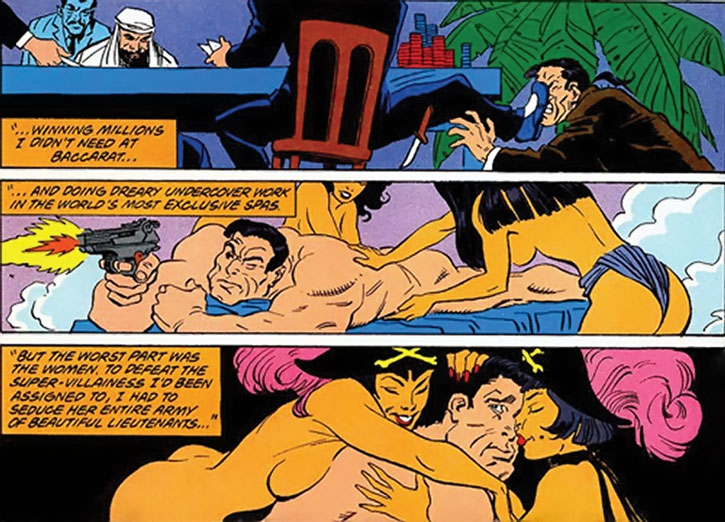 Lester Girls is an overly muscular, tall and athletic man. He has a powerful square jaw, broad shoulders and an overdeveloped upper body. Whatever task he does, he makes it look easy and without effort.

He is usually clad in a fine, dark blue suit.

Lester is a polite and kind-hearted man. He wants nothing but to live in peace. He doesn’t care about money, expensive food, cigars, mystery, adventure and sex.

His dream is to live what he considers to be the American dream. To live in a little bungalow in a quiet small town, to spend his quiet hours with a modest, substantial gal playing games, and to have hours and hours of quiet time to read classic literature, followed by a good night’s sleep. 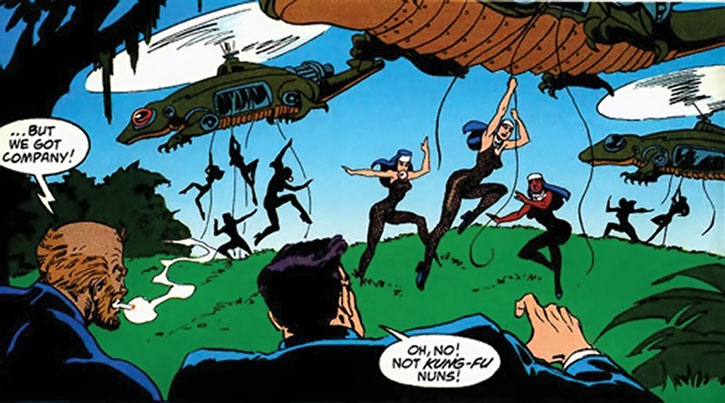 However, women will never leave him alone, and action always finds him. He will regularly have to give of his manliness and beat up some evildoer.

Men, also sensing his power, will always want to do business with him. Everybody tries to recruit him for some activity or business. He impresses any man or woman wherever he shows up even if he tries to just be left alone in peace.

Lester Girls considers himself cursed with complete success in whatever he attempts in life. To relax is not possible. Circumstances will eventually present themselves that force him once again into the role of a reluctant hero. He may not like it, and he will nag about it, but whenever a honest-to-gosh good cause presents itself he will save the world!

He feels that he has little choice but to heed his destiny as a hero and adventurer, while secretly longing for peace.

He smokes on occasion – but only to meet with the conventions of tough-guy fiction. To some degree, he appears to know that he is a fictional character. 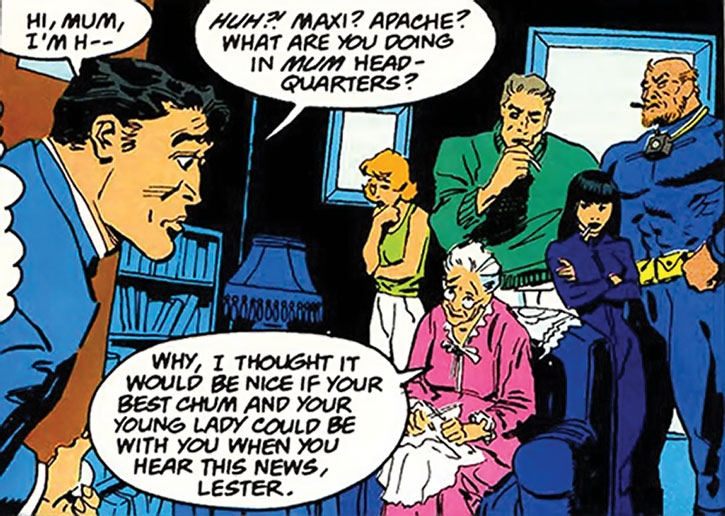 His father, Chester Girls, is also as prodigious as he is. He is the only one that really understands him and his pain.

His blood brother, Apache Dick, is also a successful adventurer, but does not share Lester’s reluctance and dreams in life, but rather greets their common successes; they are close friends.

The most important person to Lester is probably his gir… his significant other, Maxine Scoops.

He is very vulnerable to the vile trickery of his arch-enemy Lily aka the Lizard Lady.

His fellow agent and colleague, Gotter Dammerung, is a hard man and perhaps the only one capable of keeping up with Lester’s amazing life and stunts (because he is, in fact, Cachascachcan, an ancient deity). Lester is amused by his polished, well-delivered tough-guy phrases and one-liners.

“I didn’t respond. After a while you get tired of exchanging sexual innuendo with ravishing broads.”

“Too late, I realized that they’d ironically mistaken my words for a tough-guy line, when I’d only meant to appeal to the spiritual side of their natures !”

[The whole world has become addicted to nicotine] ”I know all about that addiction, Gott… and don’t think I’m not feeling the cravings right now ! But I’ve got to use all my inborn will-power to fight that craving ! Why, just think if there were to be, say, a comic book version of this adventure of ours, and all the little lads and lasses out there were to see ol’ Les smoking. What kind of example would I be setting ? But enough of this idle self-reflection ! We’ve only got another 2.1658 hours of darkness. And that’ll be just barely enough to complete our journey to Caracas !”

“Good thing that Kung-Fu nun gasped out her mistress’s location in her orgasmic frenzy !”

Gott: “So what if we do ? Mayhem is my mother, Danger is my wife, and Combat is my daughter !”
Lester: “Golly, Gott ! It’s just amazing the way you come up with these spontaneous tough guy lines all the time !”

Gott: “What’s the matter with you, punk ? Don’t you know any better than to avoid a trap ?”
Lester: “Why bother ? I always get out of them anyway.”

Given the numerous Marvel references in the series it would be fitting to have Lester Girls be a reluctant member of the S.H.I.E.L.D. organization in whatever form it may appear in a campaign set in the DC universe.

Keep in mind, though, that Lester Girls lives in the Comedy Genre.

Lester Girls was born with a perfect sense of spatial geometry. This allows him to intuitively lower the difficulty of Trick Shots that demand complex trajectories and ricochets by two full column shifts.

Furthermore, his skills is so great that he can perform attacks on any and all members of a group in hiding by shooting and having the bullets ricochet of each other on hard surfaces until they hit their intended targets behind cover. This Area Attack has an AV equal to half the APs of his Firearms subskill. Naturally, it only requires one bullet per target.

The organization known as M.U.M. is exceptionally prepared to handle any type of threat. As such, they calculate the needs for different clothing that any given field agent will have in the course of a mission. Whenever a change of clothes is needed, the agent needs but to remove his clothing only to find the required clothes underneath.

In the rare cases that the most unforeseen events occur the agents will be left with wrong clothes, but this can then be fixed by the agent, getting ahead of schedule by paying a modest fee of 1 Hero Point, thus getting the clothes that are then really needed. Field clothing range from fine suits, scuba-diving suits and a pajama to camouflage.

The organization also outfits its agents with lethal and practical gadgets. The designer of all gadgets is the Tinkerer, Evan Chance (he looks exactly like Marvel’s Tinkerer). Lester will keep a few handy gadgets on his person during any mission, and will be instructed by the GM as to the nature of these gadgets at the start of the adventure.

Source of Character: The Trouble with Girls, Malibu and Epic comics. 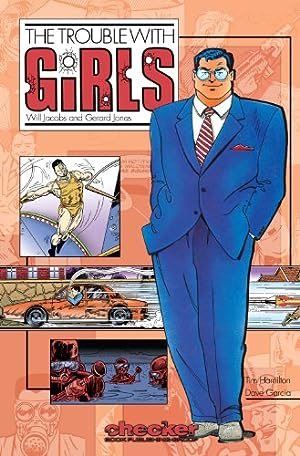 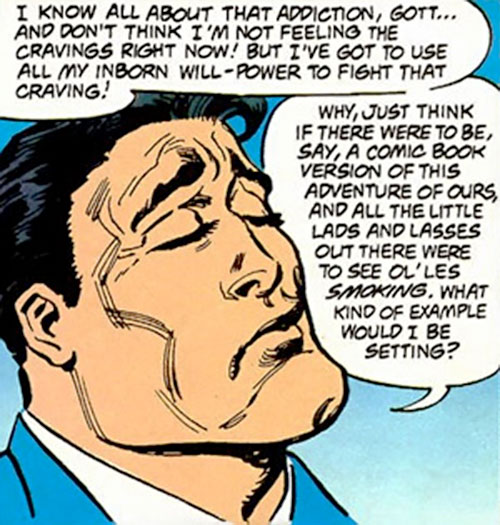 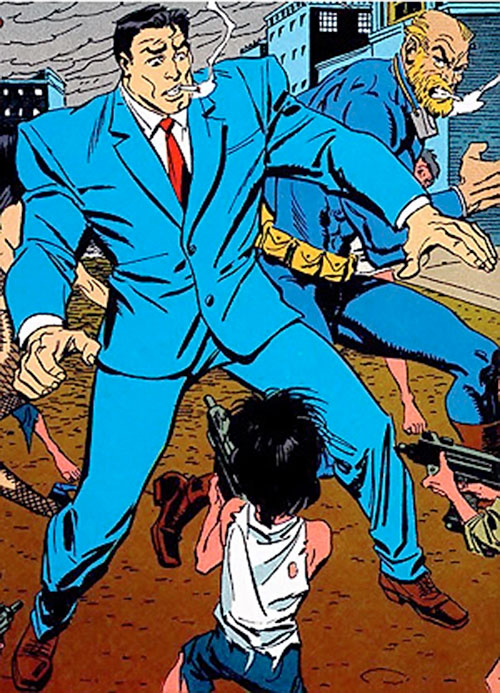 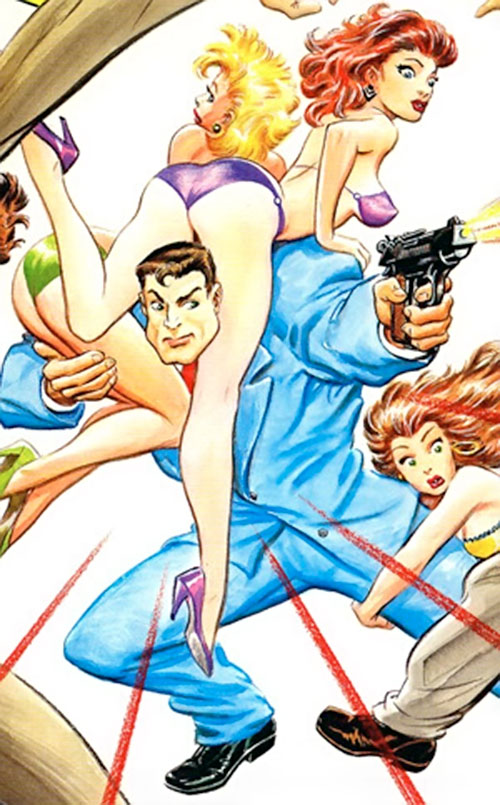 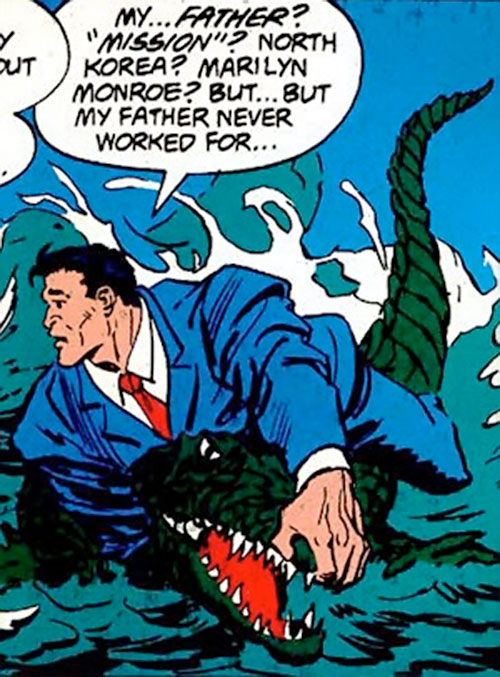 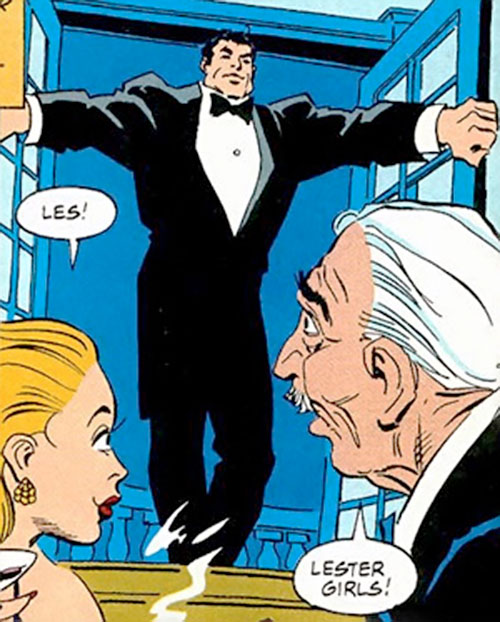 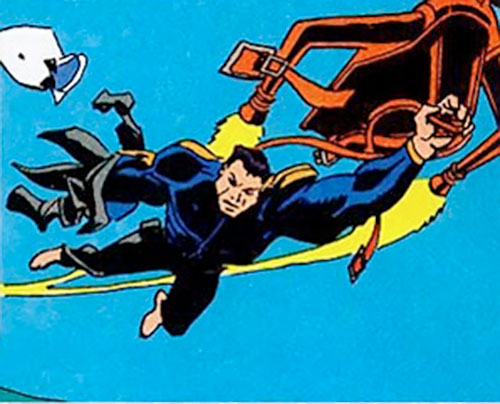