Letha is a minor Marvel Comics character, first seen in 1979.

One remark implies that Letha’s wrestling schtick was blows and holds that looked like they could cripple or kill someone. Such as hitting the spine.

It’s not otherwise evident in the material. But it would explain why she goes by “Letha”.

As one-half of the Skrull Kill Krew wrestling tag team, her signature move was the “3D drop”, presumably named after the 3D Man (Charles & Harold Chandler). It starts on the top rope and may be a double forearm drop – we don’t see her finish the move. 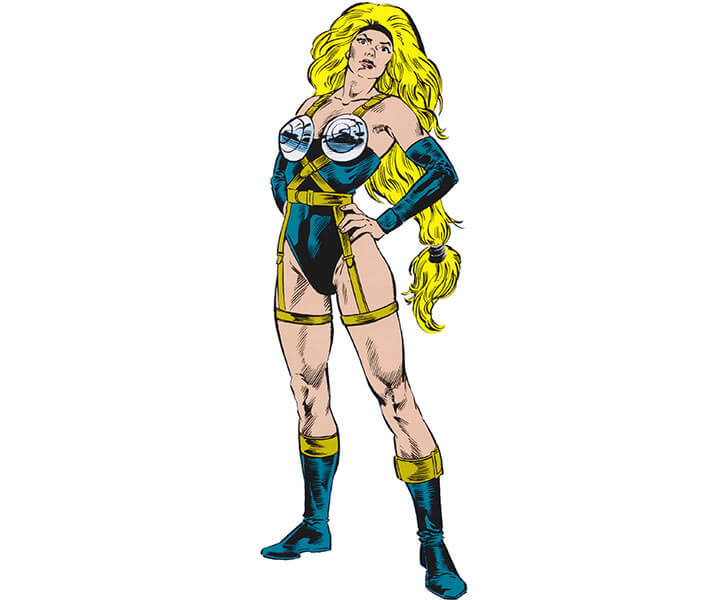 Letha had a rope and grapnel, and there reportedly were special weapons built into her costume’s straps. We never see them used, and even secondary sources  do not describe what they were.

However, we once, very briefly see her wielding a whip. In the background of a single panel. And Letha is a clear analogue of Lashina of the Female Furies, in the pre-Crisis DC Universe.

So we can imagine that she had two or three specially charged whips. If so these likely had a finite, non-replaceable power source – explaining why she stopped using them.

One panel *might* imply that Letha had some weapon or tool she could use to rip machinery open. Maybe.

She also had earplugs that filtered out Screaming Mimi’s harmful sonics. But she put those in just before Mimi would scream, so they likely impair hearing.

The latter is ambiguous since the story takes place in a Genre where people recover quickly. But it seems that Lascivious has less up-front damage resistance and more regen, and Letha is the other way around. 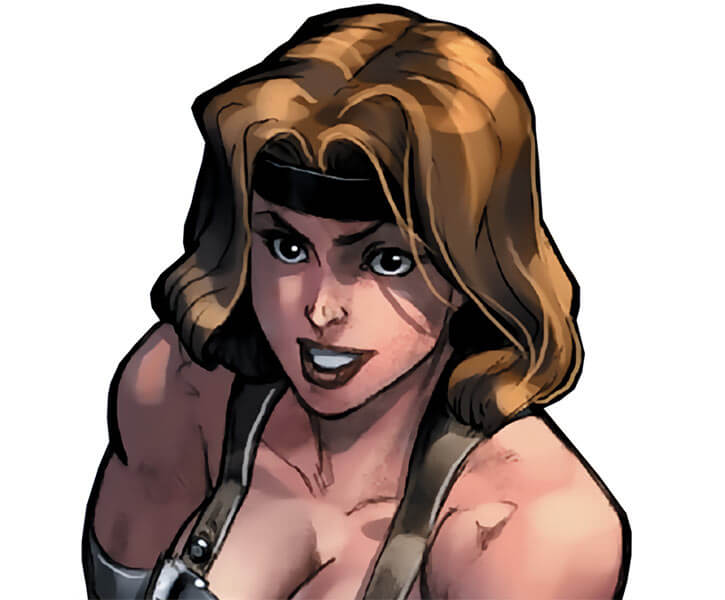 The Dormammu powers seemingly have faded away.

However, she also seems beefier and more on par, brawn-wise, with Poundcakes. And is drawn as being 5’10” (1.78m) for a change.

So my guess is that she’s stronger than she used to be at Stage #2. Perhaps she retained a bit of demonic strength.

Ms. Feliciano also acquired a Class D security guard licence. And thus at least 24 hours of training – the demands for the licence are lower in New York.

The banded breasts cups thing may have been derived from the Valkyrie (Brunnhilde)’s, who debuted in 1971. These, in turn, seem derived from older valkyrie costumes in Wagnerian operas.

When she uses her emotion manipulation power, Letha’s eyes glow a bright red and she speaks in a demon voice. The eyes of her target also become red.

As the Skrull Kill Krew (no relation), Letha and Poundcakes wear new costumes designed by the Wasp (Janet van Dyne).

They and their supporters will also have large, plain white T-shirts with anti-Skrull slogans. 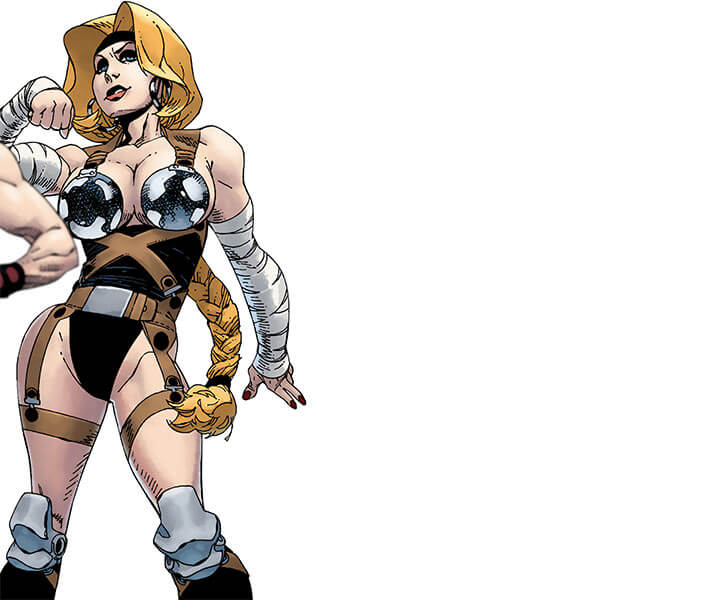 Letha is also doing the confident 1970s woman warrior thing. And like Titania, she preferred to use her martial skills over her Roxxon equipment.

But Feliciano’s style has more of a Cimmerian cast to it. She boasts often, sometimes claims to be deadly, and seldom misses a chance to comment on any attractive physical traits in men around her. Which, by late 1970s standards, was more transgressive.

(So yeah, it feels like in their 2009 appearance the personalities were swapped between Titania and Letha).

She seems to be a car person. When working for the Hood she bought a black ’57 or ’58 Corvette  . But not much of a movie person – she had never seen a film with Simon Williams.

With a little help…

Letha has an ironclad friendship with the others. She may have been the driver behind the 2011 vague plot to have Songbird rejoin.

Hellen died in an attempt to avenge her friend Davida, and is almost always seen relaxing or working with her and/or Marian.

There’s an implication that she and Davida became a couple after 2009. Unless they just run around calling each other “baby” and “angel cakes” for no special reason. But in the context of the story and writer it seemed to be more meant to make them look villainous, so… pass.

After her resurrection, Letha was feeling constant homicidal rage. She could reliably control herself, but was all in favour of plans and tactics that involved her murdering people, and/or making people murder people. Preferably in a messy, cruel manner.

At this point, she thus was more of a horror or action-horror character.

She was also angry and frustrated that she and other Scourge victims were dismissed as obscure jobbersWrestling slang for a wrestler who almost always loses – and wanted to prove how dangerous they could be.

(This doesn’t match Grapplers history. The simplest No-Prize HypothesisA made-up explanation to plug a plot hole is that she developed affinities with the jobber villains community as she worked to avenge Titania’s murder. But that’d contradict her dialogue in Captain America Vol. 1 #319. Mfff).

Like Lascivious, by 2011 Letha was free of those major personality alterations. Which freed her to embark on a seemingly years-long bender. With BEER. 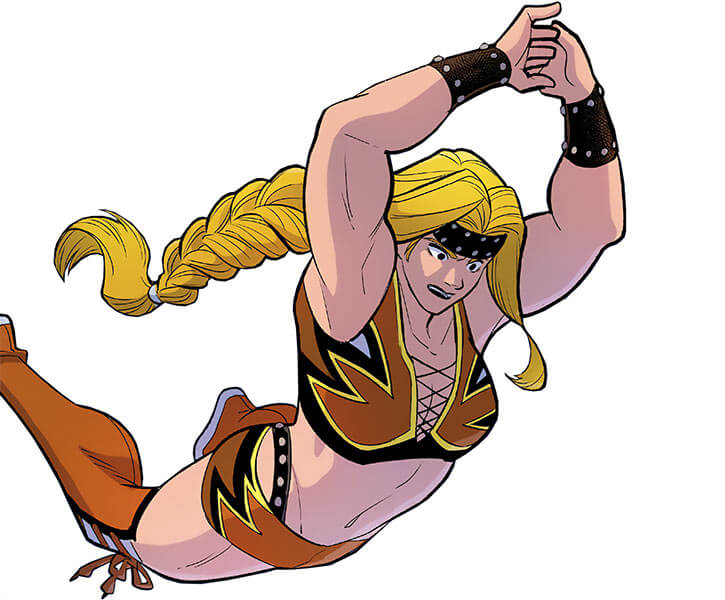 “Maybe you were a nobody once. Maybe we *all* were. All that means now is – they’ll *underestimate* us. But this — new life, new powers — if we work together, there’s no reason we can’t own this town.”

“Two handsome men killing each other over us — don’t you just love it ?”

(As the Skrull Kill Krew makes their ring entrance)
Poundcakes: “Don’t let your eyes deceive you !”
Letha: “Those aren’t your champions ! They’re a shape-changing alien menace !” 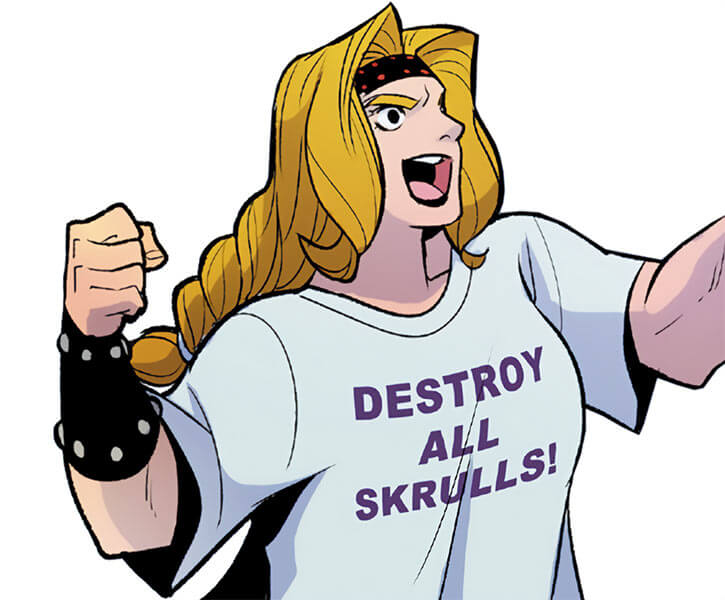 Before the Roxxon enhancements, her Physicals and her Skills likely all were one AP lower. Ditto for her Wealth.

The Weaponry is tentative. It’s high enough she can wield whips, but low enough that she’s not going to bother.

My *arbitrary* guesses for her Roxxon/Brand whips would be an electrified one (there’s always an electrified one) and one specialised in slashing through solid metal. Both can fully retract into the handle, to explain why we don’t see them.

She *might* have had the Conditional Soaking (Blunt, Unarmed) Advantage. Not enough data.

Broadcast Empath: 05, limited to homicidal rage. The modifiers likely were akin to those for Lascivious’ power.

We once see her crushing a hand grenade, which explodes in her hand without harm. My sense is that it was “super-hero comic book logic”. Where, since she’s the one crushing the grenade, she gets to use her STR as OV and/or RV.

None of the crowd she hung around with after her resurrection was conducive to Connections. But she might have acquired Area Knowledge (Bagalia).

She seems back to her Stage #2 enhancement levels, but with STR 05.

She also has Familiarity (Security guard).