Given his incredible background, Martin Riggs is, simply put, a lethal weapon. He’s an expert in both armed and unarmed combat. When in top shape he can defeat the best of them using his feet and hands only.

He’s also a frighteningly good crack-shot. He’s said to be among the eight best gunmen in the world. This means he’s a real action-type of guy.

His effectiveness in the field is further reinforced by various useful skills, such as demolition, stealth and various detection skills (he’s very perceptive).

He also uses a pretty cool trick of shoulder dislocation. When bound he dislocates the shoulder and therefore makes amazing escapes. The hardest part is the relocation of the shoulder which really hurts.

His flippant attitude makes him try to perform the most lethal of stunts, using boats, cars and charging into the enemies guns blazing, and he actually manages to carry them through mostly. In DC Heroes RPG terms he’ll spend Hero Points  on unskilled use if need be. Spontaneity and roughness are his main strengths, but the same can also work against him.

Martin Riggs served in Việt Nam in ’69. He was a member of a subdivision of the Special Forces, named the Phoenix Project , who served as a band of assassins. After a highly successful career he returned home when the war ended.

Realizing where his skills might be best used, and that he might release lots of frustration there, he joined the Los Angeles Police Department (LAPD) . During his intense career he met and married a woman named Victoria Lynn. Sadly, Victoria was soon killed in an accident.

Riggs took this very hard and saw no more reasons to live since the love of his life was gone. He fell deeper and deeper into depression and developed suicidal tendencies in everyday and professional behavior.

Each morning he thought about ending his misery by putting a bullet in his own mouth, but kept on going as a lethal weapon on the streets. He released some of his frustration in very intensive police work on the streets and didn’t really care whether he lived or died.

When at his lowest, he was assigned as a partner to the old police veteran Roger Murtaugh. Murtaugh had just turned 50 (good subplot material) and wanted to take things easy since he had but a few more years to go before he could retire from the LAPD.

Now, Riggs and Murtaugh were very different in personalities, habits and work methods. Riggs’ suicidal tendencies often collided with Murtaugh’s more sensible attitude. Initially, they fought over the most trivial of things, but eventually learned to gain from each other’s strengths. As their success rate grew so did their friendship. 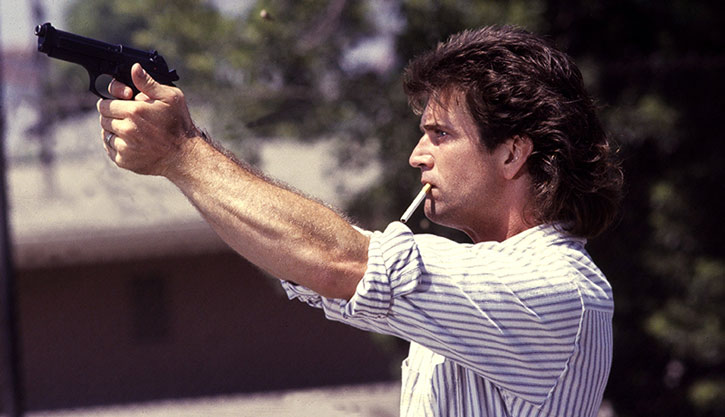 They later on became the best of buddies and Riggs also befriended Murtaugh’s family (Trish, Rianne, Nick and Carrie) and they began to regard him as a member of their family later on.

As part of the Homicide Division, their first mission was to investigate the apparent suicide of one Amanda Hunsaker. During some very dangerous work, they managed to uncover a huge drug-smuggling operation. They finally stopped the drug baron dubbed “the General” (Lethal Weapon I).

Some time later, when a red BMW crashed while they are chasing it, they discover the trunk was full of South African Krugerrands. Their boss assigned them to protect a Federal witness named Leo Getz to try and keep them out of trouble.

The duo found the owners of the Krugerrands, South African smugglers, who then found themselves being hounded and harassed by Riggs and Murtaugh. However, they were protected by diplomatic immunity. Thus the duo was assigned to witness protection duty only, in an attempt by their captain, Ed Murphy, to keep his job.

When the witness revealed he has been doing business with the same South Africans, the story evolved into a fast moving chase. Riggs found an interesting woman working at the criminal’s embassy, Rika Van Den Haas, but she was murdered by the same criminals since she knew too much.

The mission successfully ended when the smuggler’s boat was destroyed and the diplomat, Arjen “Aryan” Rudd, was shot down by Murtaugh in self defense (Lethal Weapon II).

Martin Riggs finally met his match in the form of Lorna Cole, a beautiful but tough policewoman. Together with Roger Murtaugh, the three attempted to expose a crooked former policeman and his huge arms racket. It was revealed that he had robbed weapons from the Los Angeles police depot.

The crooked cop, Jack Travis, thwarted them at every turn – mainly by killing anyone who was about to talk. But Murtaugh had personal problems of his own as his family was brought into the equation. Riggs and Murtaugh also had to deal again with Leo Getz, and Riggs had some very special problems with Lorna Cole.

Martin Riggs and Roger Murtaugh were now both feeling too old to be doing what they were doing. Nevertheless, they tried to stop the Chinese Triads from doing their illegal business in the U.S..

Uncle Benny, Chinatown’s mob boss, had imported Chinese slaves to pay for an artist to create counterfeit Chinese currency which the Triads (led by one Wah Sing Ku) would use to buy the Four Fathers (heads of the Triads) back from the Chinese military.

Riggs and Murtaugh, after meddling too much with the Triads, were put on a hit list by them. When bloodthirsty mercenaries were on their trail, they teamed up again with Leo Getz (now a private investigator), Lorna Cole, and a newcomer, Lee Butters, to finally put an end to the Triads for good.

It was also revealed that Lee Butters was secretly to become the husband of the conservative Roger Murtaugh’s daughter Rianne, as well as fathering her child. Meanwhile, Lorna was pregnant and considered marriage with Riggs. When the local Triad was destroyed and it was time for Lorna to give birth, Riggs and she finally married each other.

They both became parents of a son and even the hectic Leo Getz was taken into the family.

Riggs is of slender built, average height, heavily scarred man, that is very fast and nimble (well, he is Mel Gibson). He has a slightly wild appearance (and could probably be mistaken for a criminal himself if he wanted to, which is good for undercover work) and is not representative of the appearance people thinks a member of the LAPD would have.

His usual attires, during spare time and work, are a T-shirt, a pair of jeans and jogging shoes. He keeps his gun inside his belt and the badge in his pocket.

His clothes usually end up in ragged pieces when the action gets going. During evenings he uses dark jackets and the type of hat the boaters just love (well, he lives on a boat). His movement pattern is impulsive and irrational (although that is mostly a show) and he can look dangerous if need be.

At first, Riggs was suicidal and had a death-wish. Finding new reasons to live he gradually lost his depression and even became a happy man later on. He’s prone to very spontaneous behavior. At all times, Riggs is also a prankster (with criminals, colleagues and especially with Rog ; in fact, he never leaves him one moment of rest).

He’s also a smoker, drinker and workaholic. Work allows him to release his frustration and he occasionally gets carried away too much and becomes too involved with work (basically blowing away anyone that stands in his way, if that happens).

Being a very physical type of guy, he will actually run after cars instead of taking a car from someone. If forced to he’ll eventually acquire a vehicle, using his badge. He has dangerous habits and often gets into reckless situations as a result of his brash character. He really learns nothing of past mistakes, probably since he enjoys action too much.

Rog is without a doubt his best and closest friend. He had trouble leaving his past sorrow for his deceased wife, but eventually got over it and married Lorna.

Basically, he accepts Leo Getz, and even befriends him later on, due to his unique personality. But he constantly jokes with him, even dangerously and quite irresponsibly, and also ridicules him. Riggs is mostly determined and will break the law in order to catch/kill known crooks. He never stops ticking and has a very strong, ongoing attitude.

“I have a certain reputation for being… spontaneous.” (Riggs said with a vaguely crazy, unhinged air that added a lot of weight to that gun)

Just insert the guys… The LAPD is big enough for these guys too.

Riggs across the ages

During Lethal Weapon IV Riggs was really out of shape; he had accordingly lost his Martial Artist skill entirely, along with one point of DEX (in an Age Subplot; remember that affected all Physically Linked Skills), but regained them during the movie. 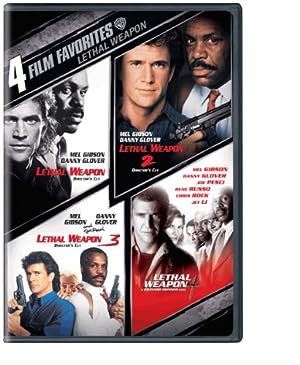 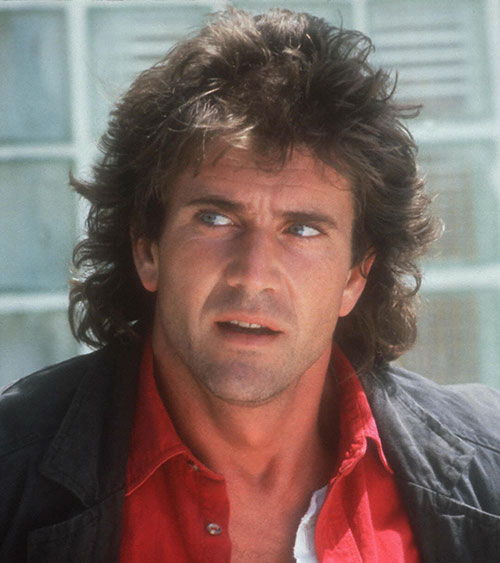 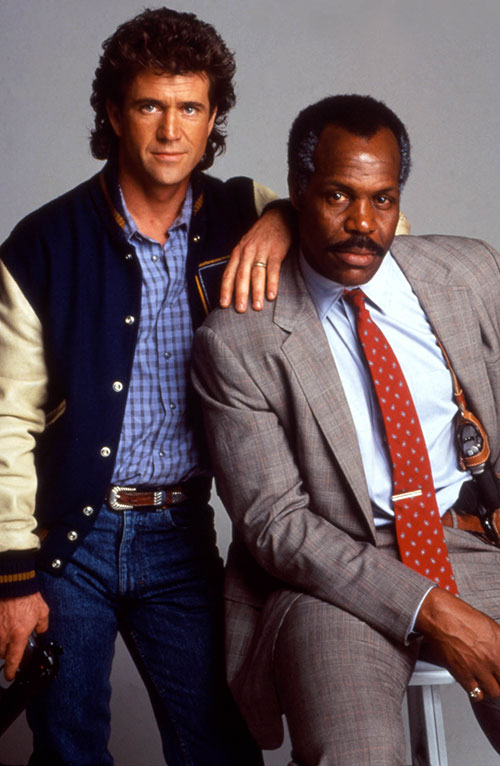