Leviathan is a cinematic , James-Bondian-but-more-over-the-top Marvel villain. He clashed with Nick Fury in 1990/92, and with Silver Sable in 1993.

He is a handy street-level mastermind, with lots of assets and smarts and tricks to throw at his enemies. So that’s a strong point for Gamemasters. However, he didn’t really stick – he’s missing a little something to be an enduring character.

Leviathan is a highly skilled man, with a host of unusual and unexpected abilities. He’s :

Leviathan has long since understood that the best way to power was religion. As a result, he heads a bizarre cult called the Coven. This powerful cult is but a cynical ploy, but Leviathan has worked a lot to make its members totally subservient to his will. As a result, he developed great skills in applied psychology and mental conditioning.

The Coven being a successful cult, it has many members. And some are in position of power, such as the Air Force officer who almost allowed the Coven to steal a stealth bomber. This is modelled by Leviathan’s Omni-Connection ; usually those connections are members of the cult and thus fanatically loyal to him.

He can also create “connections”. This is usually done by researching well-placed military officers, then kidnapping their family, breaking their will and brainwashing them. Between the terrifying, fanatical muscle from the Coven and his own skill and image, this is usually a very efficient tactic.

His extensive contacts with former KGB operatives and his strategically-placed converts give him access to fantastic intelligence. He can often locate top-secret installations and access highly sensitive data. While he’s obviously not all-seeing, nothing should be assumed to be hidden and secure from him.

The man only known under the codename Leviathan is a reputed operator on the terrorist and mercenary scene. He came to prominence after S.H.I.E.L.D. was disbanded following the Deltites fiasco.

Leviathan is the head of a fanatical, heavily armed cult he built himself : the Coven. The Coven is known to have had vicious clashes with the CIA, and presumably other intelligence and law enforcement organisations. It apparently represents a serious threat even for those.

When Leviathan first clashed with Nick Fury, the Coven had grown so powerful that they could assault a military base in the South-Western US. They were attempting to steal a B2 stealth bomber. The base’s soldiers barely managed to push them back. The Coven only failed due to a daring pilot who ran to the cockpit and took off with the bomber at the last instant.

However, at least one airman was secretly a Coven member. He warned his coreligionists when the bomber returned. Leviathan and his cultists didn’t lose time, attacking again before reinforcements could reach the isolated airbase. He was arrested by Colonel Nick Fury at the last moment, though.

Leviathan was sent to the Vault, but this apparently was a part of his plan. He stole and read his whole CIA dossier while he was a captive there, then escaped after tricking a Guardsman into removing his helmet. Leviathan knocked the man out and stealing the suit in order to get away.

He then continued working on his plan, kidnapping the family of several high-ranking officers of the US military and breaking them in order to obtain strategic military secrets.

Fury eventually caught up with him, and Leviathan was targeted by a missile. However seconds before impact he called his followers to him. The dozens of fanatics who piled up on him to protect him with their flesh allowed him to walk away from the detonation, laughing and sucking his lollipop.

His teeth sunk deeply into the US military, Leviathan kept using blackmail, brainwashing, intimidation and his sinister aura to stockpile serious military hardware. It soon became obvious for Nick Fury that Leviathan was planning something big. The Colonel also concluded that defeating Leviathan once more would be pointless. His power base, his cult, had to be destroyed first.

To this end, Fury enlisted the help of none other Captain America. The two men assaulted Leviathan’s base directly. Furthermore, Leviathan’s hold on his cultists was slipping. At that point they wanted him to demonstrate dark magickal powers, and he was out of time to come up with some simulation of such.

Leviathan bought some time by kidnapping Lump, a very young artificial lifeform who once was in custody by S.H.I.E.L.D.. But even this “larvae from the nether regions” wasn’t enough when some of the American military men started to reject indoctrination.

When Captain America came at Leviathan in front of his men, his gambit turned into a home run. Leviathan had no “satanic powers” to vanquish the super-soldier with, and Captain America’s sheer charisma and eloquent words shook even the most determined cultists.

The Coven was broken, and the vast majority of the recently converted officers rallied with Captain America, fighting against the other cultists. Leviathan attempt to escape in a former Soviet nuclear submarine loaded with experimental tech, but was stopped by Cap and Fury.

Of course, as soon as he was in prison, Leviathan started rebuilding his cult. He swayed convicts to his fake, dark religion. This time, though, he didn’t manage to escape on his ow. It was three ageing Nazi war criminals who busted him out.

The three men needed his expertise to use a top-secret experimental weapon they had stolen. This weapon, they intended to use to resurrect Baron Strucker. They let Leviathan flee from them with his life when his usefulness was at its end – and eventually brought Strucker back to this world.

In short order, Leviathan rebuilt the Coven, and hatched a new daring plan. He had the Coven attack the phone company, both as a diversion and to hack into government networks to gain additional data about Fury’s Infinity Formula.

This time, it was personal. Leviathan intended to destroy Fury by stealing the chemical keeping him alive. He even located and invaded Fury’s house. Although Kate Neville was present, she ran out of bullets long before Leviathan ran out of followers, and was brought down.

Leviathan located Fury’s safe and absconded with the Infinity Formula, gloating about how valuable the chemical was and how Fury would now die of old age. He also defenestrated Kate Neville, although Fury and Deathlok saved her. Fury and Deathlok then defeated Leviathan.

Leviathan escaped and rebuilt the Coven. He became anxious to strengthen his financial power — mostly through drug trafficking. Thus, he once got personally involved in the smuggling of four tons of heroin into New York City, as his presence was necessary for the deal to go smoothly. This irritated him to no end, as he considered himself to be above this.

However, Silver Sable was tracking him down. She knew that Leviathan had been dealing with Hydra old-timers. Furthermore, she suspected that he held highly secret information about her father, whom she had recently learned was alive. However, Sable spotted the Punisher — who also had heard about Leviathan’s location and was gunning for him.

To the best of my knowledge, he hasn’t been seen since. Presumably the reborn SHIELD countered his attempts at redeveloping his power base.

Leviathan’s locs quite often vaguely resemble a tresse of serpents, which fits his theme.

Leviathan is one cool customer. He seems utterly relaxed whenever he’s not busy being flippant.

This mostly stems from his habit of being in total control of his surrounding (with him being a cult leader and all), and knowing how effective his unusual skills can be. He’s pretty good at sizing people up, and has a knack for sensing when he’s faced with superior force. In such cases he’ll depart and leave his follower to the dogs.

Leviathan is devious, manipulative and incredibly resourceful. Most people are easily played by his words, and he can turn anything into an advantage. For instance he once jammed a simple lollipop into the eyeslits of a Guardsman power armour . He often displays a manic intensity that is not unlike the Joker’s.

He loves lollipops, and is rarely seen without one. He also seems to enjoy putting himself in danger and relying on his great resourcefulness to improvise a way out of it.

Another of his pleasures seems to be the spreading of disorder and anarchy. He really doesn’t like central authority and government.

(Engaging Colonel Fury in hand-to-hand combat) “No need for the guns and bravado, Colonel… we’re both reasonable men. Though it’s unlikely we’ll ever be able to see eye to eye. There’s a joke in there, Colonel. Why aren’t you laughing ?”

“I feel as if I’m letting you down, Guardsman — I have no metallic tentacles with which to encircle you… no exploding pumpkins to toss your way… My only “power” is the power of faith… I had faith that your condescending arrogance would result in a confrontation, not dissimilar to this one. I had faith that by letting myself be captured, I would be able to play off Pincer’s buffoonish eagerness and gain the information from him that you wanted. And ultimately, as always, my true faith is in myself…”

“The power of evil is strong, Colonel — it has found myself and my coven worthy of serving its gods, and we do so willingly. In return for that faith, those who wait in the pit grant us the strength to vanquish any man !”

He could have emerged after Extreme Justice killed Kobra — provided you consider that to be in continuity, of course.

One of Leviathan’s main assets is a large group of fanatical followers. While they are not particularly skilled, they will not hesitate to die for Leviathan – which is just the way he likes it.

The Coven seems to be a Satanic cult, promising great supernatural power to its most obedient servants. These seem to genuinely believe there is a strong supernatural element behind Leviathan and worship him as a god.

The followers of the Coven are mostly thugs, rogues and other lowlives who joined the cult to give their life meaning, though some seem middle or even upper class. When needed, Leviathan can equip some of them with stolen technology, such as a strength-enhancing exoskeleton . After all, as a criminal organization, the Coven mostly deal in high-tech state secrets.

However, 98% of the time, he just needs them to attack savagely and jump in front of anything aimed at him.

Coven followers have the following stats :

Coven cultist
“I revel in the pleasure I shall bring my liege, Leviathan — by delivering to him your soul !” 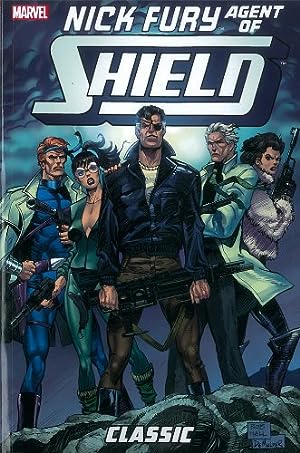 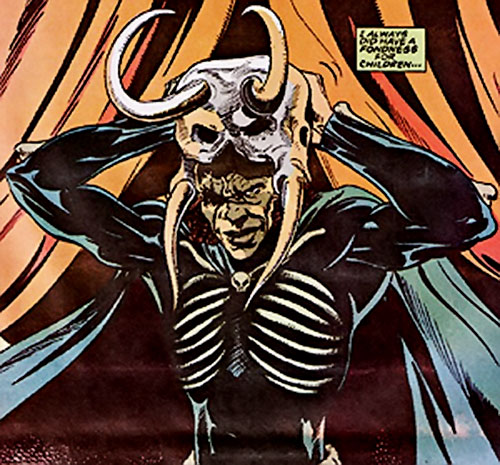 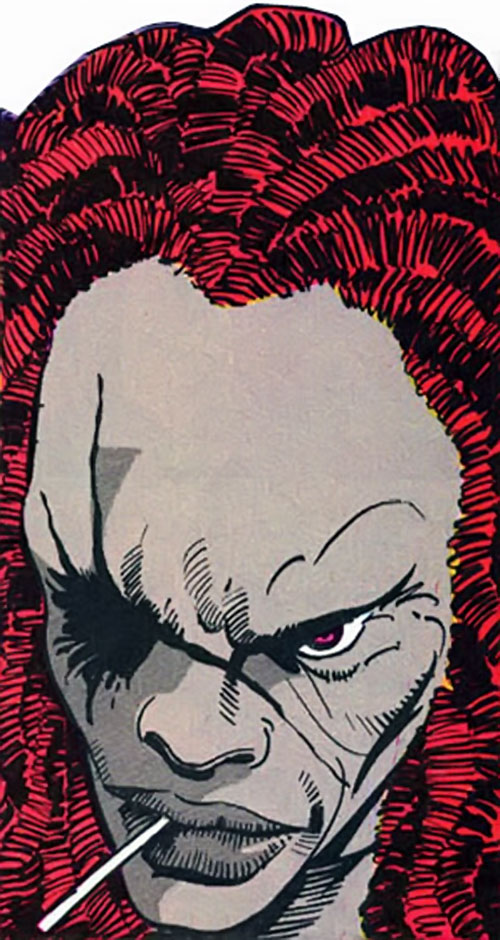 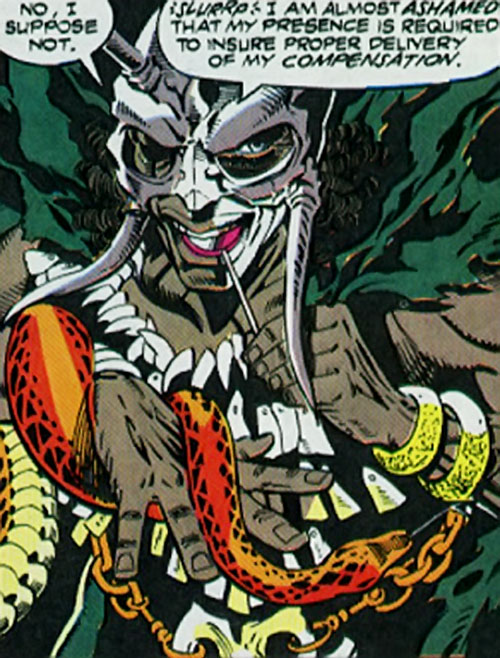