Leviathan is the equivalent of the pre-reboot Colossal Boy.

Gim could grow up to 300 feet tall, gaining proportional strength and speed.

All Gim Allon ever wanted to become was a police officer. To this end, he enrolled in the Science Police Academy on Mars. But there, he found a more effective way of enforcing the law.

While chasing a rogue Durlan across the sands of Mars during a meteor storm, his quarry was hit by one of the meteors. Allon was knocked off his vehicle by the shockwave. He lay comatose in a hospital for months. When he woke up, he was, to everyone’s surprise, 15 feet tall.

Gim soon learned to master his ability to grow as tall as 30 feet. He became the most effective policeman on the force, rising quickly to the rank of lieutenant. When the Legion of Super-Heroes was formed, the Martian government sent him to Earth as their representative.

Despite some initial resistance, Gim soon realized that the Science Police, and Chief Desmond Wilson in particular, were using him to advance their own public relations. Yet, he also understood that he could be more effective with the Legion.

Upon responding, he found that his experience on the field of battle got him chosen leader by the United Planets. But after the fight against Tangleweb that cost Kid Quantum his life, he ceded the mantle to Cosmic Boy, who made Leviathan deputy leader.

Gim, as Leviathan, has since made up for his failure on that first mission. He had led the later mission which eventually captured the creature. After Cosmic Boy resigned as leader, he became extremely critical of Shrinking Violet’s moves as leader of the team, possibly jealous that he wasn’t chosen.

Attempting to establish himself in everyone’s eyes as a true hero, he took initiative in the fight against Doctor Regulus on Gallan. Gim died in action, which fulfilled a secret desire he’d always had. This also triggered a revelation by Violet that she possessed the Emerald Eye of Ekron.

Leviathan was buried with full honors on Shanghalla. The Legion Outpost in space was named in his honor.

Gim was a tall guy, with brown hair. His uniform was blue and red, and formerly included a red helmet.

Gim was a natural leader, though at first his leadership was tainted with dreams of glory.

Gim continually regretted his actions that caused Kid Quantum’s death. To compensate, came down hard on Star Boy (Quantum’s replacement), in an effort to toughen him and make sure he’d survive.

Gim expected the best from the Legionnaires and would not settle for less. 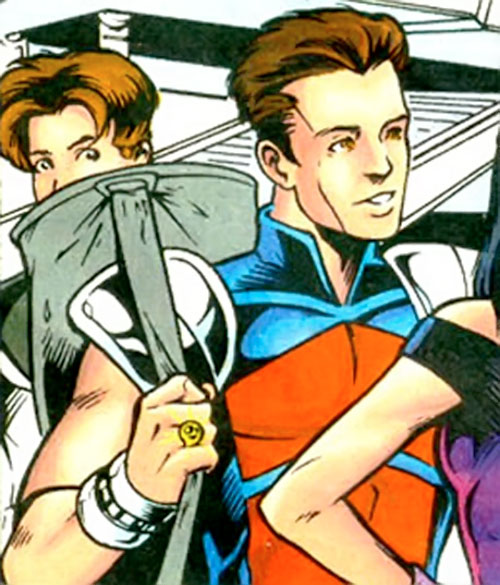 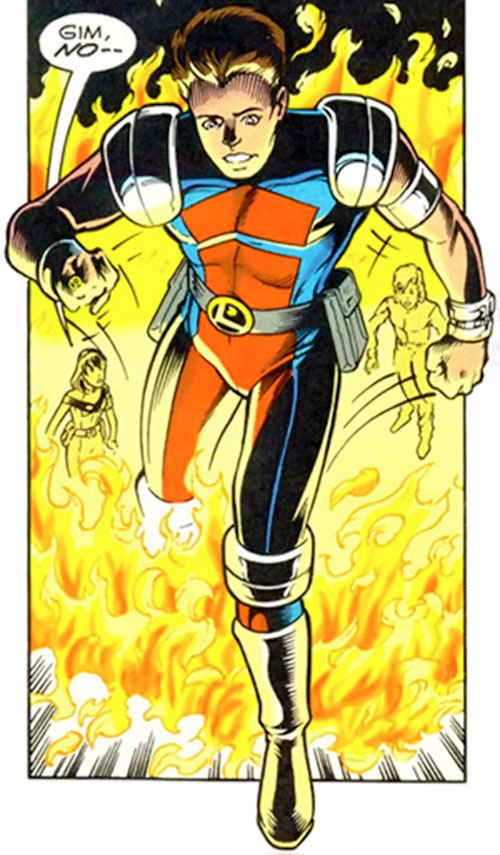