Xev/Zev is a blond/red haired and attractive woman with a beautiful, full-shaped body. Her hair was originally rather short-cut, and eventually grew into long free-flowing and voluminous. Her eyes are dark, and her lips pouting.

Being designed genetically as a love slave, she has an aura of sexuality and vitality. Clearly of good health she bursts with energy. She appears playful and confident, which attracts lots of attention.

She is usually seen clad in a short skirt, bra and high boots, shaped with a hint of the lizard, all in light colors; it looks classic Greek-Roman in style. She also wears black shoulderpads and a black belt, all in leather.

Xev/Zev literally grew up in a box. She was programmed only for wifely duties, and so, her emotional growth has been greatly hindered.

However, this gives her a strangely multi-faceted personality with unusual opinions and thoughts, while she still remains simple in manners. She is learning more and more about the ways of man every day that goes, and she is a very eager student of life. Every day is a new adventure.

She is often innocent as to the ways of the universe, and equally often speaks like a child. This is true, in particular, when she speaks about sex or violence. If the GM wants to highlight this aspect of the character, she should also be given the Innocent Drawback.

She was originally an unattractive and overweight woman, and so does enjoy her new healthy and attractive body genetically designed as a love slave. After the first love slave body, Zev, was transformed into a cluster lizard and destroyed, she was eventually reborn into new form, as Xev.

Xev/Zev is physically well at ease with herself, and displays physical confidence.

She has a, for her appearance, surprisingly timid although open personality, but she grows in spiritual strength when she or her friends are threatened or when she really believes in something. She has very strong opinions, and sometimes becomes a real heroine; Xev can be counted on to do what is best for the general populace.

All in all, she is an easy person to befriend, and she is, without doubt, the most social of the LEXX crew, always eager for a good time. Xev is, indeed, the one that wants to go visit the aliens instead of blowing them up.

The lady or the lizard

She seems to be at peace with the bestial cluster lizard side of her. She embraces her superior abilities and rage when they are needed to save the day.

Xev also taunts opponents with stories of the greats cluster lizards, at which time she also points out that she is part cluster lizard herself; these are excellent intimidation tactics, in particular if she also displays some of her superhuman abilities. The cluster lizard side makes her very aggressive on occasion.

Despite their differences she has become good friends with Stanley Tweedle. She fell in love with Kai, the dead man, from their first meeting, and has pursued him for years; now having accepted the facts, she is a dear friend of his for life.

The robot 790 is a good friend, one that always boosts her confidence and showers her in compliments. And everyone they meet are potential friends, or even mates.

When she realizes what she wants, she goes straight for it and says it like it is. She is in no way shy, and enjoys an exhibitionist streak. Having a great body (designed as a love slave) makes it especially easy for her to deal with men. Naturally, there is an air of sexuality in all such communications, and she is not beyond using sexual promises to get what she wants.

Her greatest ambition appears to be freedom and to socialize with all types of people. To get to travel the universe(s) is a great and interesting plus.

As I type this I have the battle hymn of the Brunnen-G stuck in my head, so I think you should suffer too.

Dr. Kazan: “We were meant to be partners in greatness ! Your home will be the entire universe, aboard the Lexx, with me at your side ! We’ll be the crew, you and me ! Be bold, Zev, don’t compromise yourself with sentiment ! Together we can own the universe ! You know this is what you want ! You are one of the chosen, we both are ! Seize your fate !”
Zev: “Can’t we just have sex instead ?”

Also, given the high technology level, the LEXX with crew fits well in the Legion of Super-Heroes era, or even better directly after one the major world wars to have preceded that era had ended; an era that was until then ruled by the tyrannic Shadow, ruling many of the planets to later form the United Planets network.

Bonuses and Limitations:
All Powers are Minor Marginal (-1).

Drawbacks:
Alter Ego (uncontrollable; see below), SIA (Kai the last of the Brunnen-G), Forced Exile (Dark Universe, after the 2nd season only).

Xev/Zev is not fully human, but actually part cluster lizard. As such, she sometimes performs superhuman feats while under extreme stress. Her hissing voice, when activated, can intimidate opponents, and she can perform great feats of strength or speed while active on adrenaline.

Cluster lizards like to eat human flesh, and in particular the brain. They can roll and move about very fast (Jumping & Running), are naturally strong (Adrenaline Surge) and live on very, very hot worlds (Flame Immunity). They are also very determined (Iron Will).

In game terms, all Zev’s superhuman abilities are Minor Marginal powers, meaning she has to pay a fee of 5 HPs whenever she wants to activate a Power for 1 hour of use.

Excessive use of abilities (GM discretion) will eventually physically turn her into a cluster lizard, loosing all humanity and with powers active all the time, at which point she becomes an NPC with Strange Appearance and a Motivation of Nihilist. 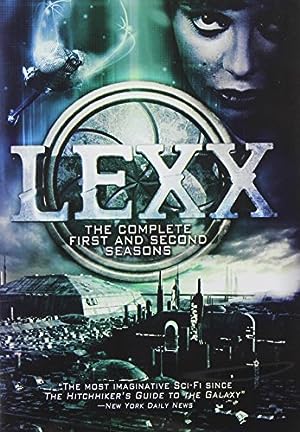 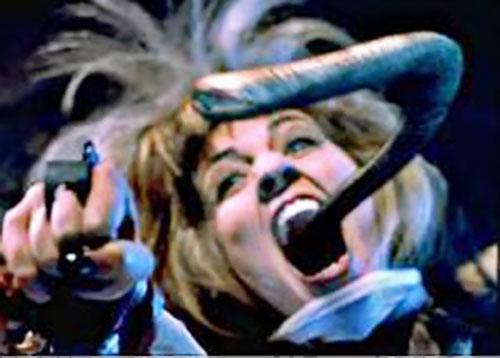