Liberty Belle is an Olympic-level athlete and an excellent hand-to-hand combatant. For unknown reasons, when the Liberty Bell is rung, Liberty Belle experiences an adrenaline surge that briefly increases her strength and speed, although not to a superhuman level.

As far as is known, she must wear her tiny replica of the Liberty Bell (hidden in her belt buckle) for that effect to take place. This effect may be true of other bells symbolising liberty, but then there aren’t too many of those.

After the Spring of 1942, she can project pulses of sonic vibrations from her hands. The pulses can be strong enough to shatter solid objects.

Libby Lawrence is a descendant of Bess Lynn, a Revolutionary War  nurse who fought the British in the costumed identity of Miss Liberty.

Libby was a champion athlete in school, and received a tiny replica of the Liberty Bell, made of the same metals, for winning a college athletics tournament.

In 1939 Ms. Lawrence was in Poland with her father, military attache Major James Lawrence, when the war broke out. Major Lawrence was killed in a Nazi air attack on Warsaw. Libby eventually escaped Nazi-occupied Europe by swimming across the English Channel. That escape made her a celebrity.

The belle steps into the ring

Libby became a newspaper and radio commentator and strongly advocated fighting the Axis power. She also became the costumed heroine Liberty Belle to fight subversives and other evildoers. Liberty Belle became a founding member and co-chairman of the All-Star Squadron, a wartime organisation of virtually all of America’s super-heroes.

Her confidante, Tom Revere, the guard of the Liberty Bell (and descendent of Paul Revere ), became her ally. In some versions of that story, it was he who gave her the tiny replica of the bell. Together, they discovered that each time the Bell was rung, her tiny bell would also chime. Ms. Lawrence would then experience a rush of adrenaline that could increase her strength and speed.

Liberty Belle fell in love with a fellow Squadron member, Johnny Chamber, alias Johnny Quick. They were secretly married in their civilian identities. It is not known whether they ever revealed their marriage, or how long it lasted.

During the Spring of 1942, a machine used by Baron Blitzkrieg focused vibrations from the Liberty Bell into Liberty Belle’s body. This gave her the ability to project powerful sonic pulses. It is not known how long she retained her power, or what happened to her after her last recorded adventure in 1947 (or rather, John really insisted that we don’t write about it).

Libby Lawrence, in the late 1930s and early 1940s, was what would be considered in the 1980s the archetypal liberated woman. After witnessing the Warsaw bombing and swimming across the English Channel, she leveraged her newfound celebrity into a strong career as a radio personality. She blasted the Nazis at every opportunity in hopes of thwarting them through the spread of information.

When Libby developed her curious adrenaline-like abilities, she merely took that same battle to local saboteurs, using fists instead of words to put an end to them.

Of course, as is typical of the 1940s woman as portrayed in a superhero comic. When confronted with true love—in the form of Johnny (Johnny Quick) Chambers—she spurned him, initially, thinking him little more than a nuisance. Predictably, this attitude quickly thawed and Libby Lawrence fell in love with Chambers.

True to professional form, however, they never allowed their personal relationship to affect their professional lives, instead displaying an astounding trust in each other.

Equipment:
BELT BUCKLE [BODY 06, originally needed to activate Power Reserve. The original Limitation was : Only after the Liberty Bell has been rung in Philadelphia. This limitation later evolved as it was revealed she only needed an exciting patriotic display, and the power was innate rather than triggered by the belt buckle].

By Sébastien Andrivet and John Colagioia (using World at War and Who’s Who). 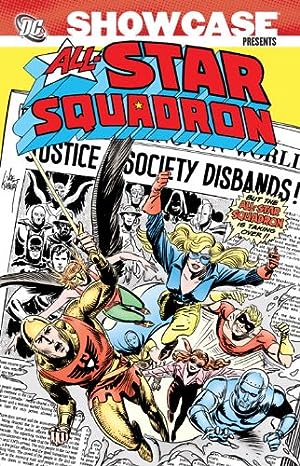 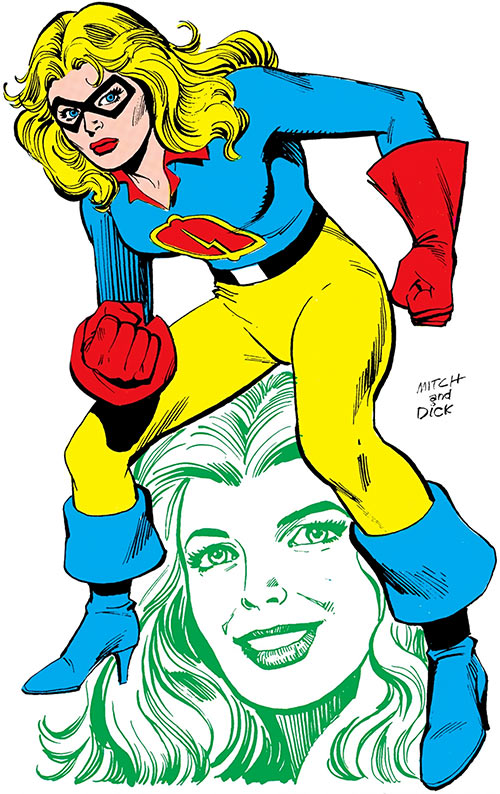 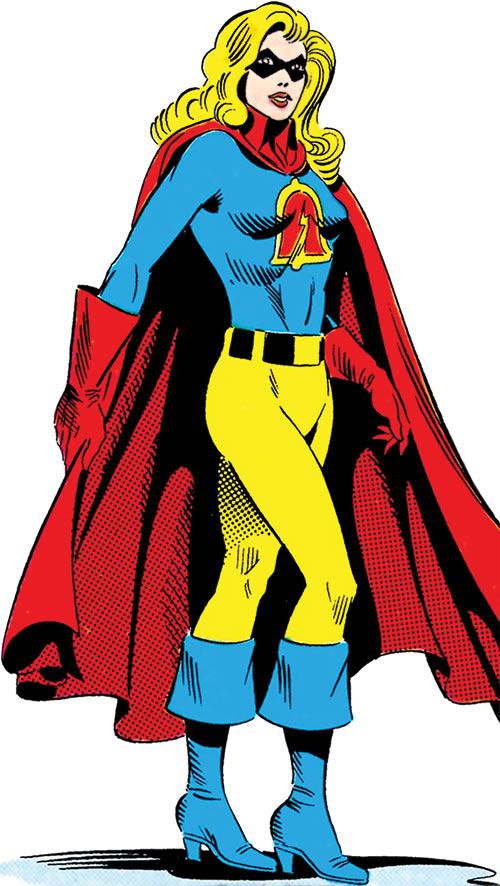 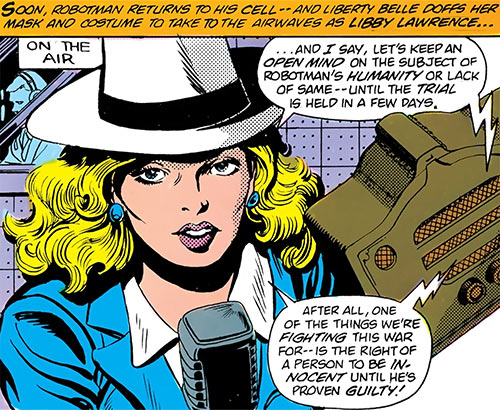