This one is pure, pointless, personal nostalgia.

In 1985, issue #26 had a big scenario for super-heroes TTRPGs, multi-statted to boot. Namely Marvel Super-Heroes RPG Classic and Superworld. Though apparently the manuscript also had Champions and Villains & Vigilantes stats.

Unicorn was one of the Non-Player Characters in this scenario. She is presented here since she’s the one whose costume can most clearly be seen in the article’s main illustration.

She is also superhumanly durable, with a minor healing factorThe power to heal wounds and regrow tissues, like Wolverine.

Further, she can fly and sense danger.

Her powers also make her an amazing hand-to-hand fighter. She’s well able to engage the greatest martial artists and brawlers in the world.

As Janet Just, she is a gifted medical student. 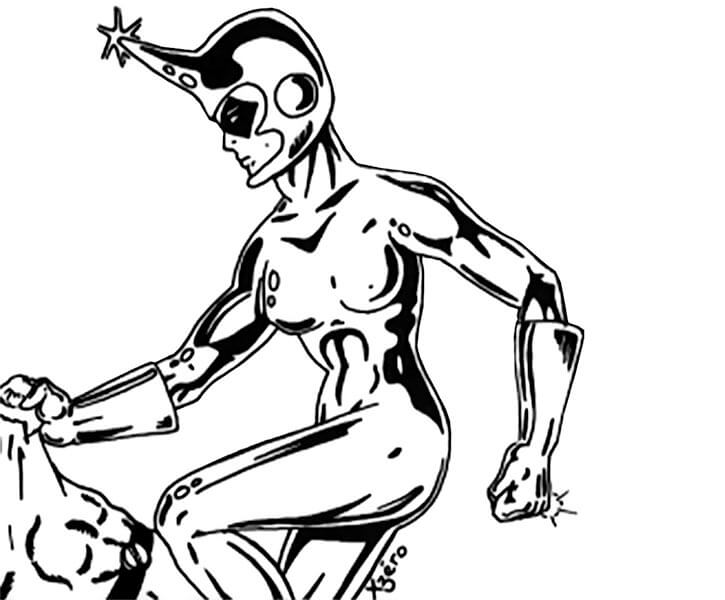 One of Janet Just’s ancestors allegedly met with an unicorn, who granted her super-powers.

These powers have apparently been transmitted from mother to daughter for generations, along with a great yearning to fight evil wherever it may lurk.

Janet studies medicine in Central City. When the scenario starts, she is among the newly-minted super-heroes who answered a classified for a mysterious new organization called Super-Heroes LLC.

This company offers considerable support to beginning super-heroes in the area willing to form a new team. Fully-equipped headquarters, lawyers, scientists, officially-recognized ID even in costume, vehicles, a salary…

Could it be too good to be true ?

This beautiful lass can instantly have her costume appear – a silvery white, featureless full body suit. The forehead sports a unicorn-like horn that is actually part of her skull, and the source of her powers.

For some reason I can see her doing the Wonder Woman spin to change.

(The header is Juliette Binoche  in contemporary — so, 1985 — André Téchiné relationship drama Rendez-Vous. If I had a lot more time I’d change the hair colour, but otherwise it’s a good match. The forest and stones — below — are in Brocéliande, strongly associated in French folklore with fairies and Merlin).

Ms. Just is a starry-eyed idealist, dedicated to stomping evil things whenever they rear their head. She is utterly uncompromising and driven – and, frankly, naïve.

However, her dedication to the high road is backed by an exceptional willpower.

She is a particularly nice and social person. But also a highly private one with some fairy tale notions about romance.

EV can only be used when Charging. It represents her horn.

Martial Artist is a Powered Skill.

SIA toward Uphold Good, Secret ID, Loss Vulnerability (all Powers, and all Attributes above 3 APs, if her horn is broken and until it regrows).