Hunter is a veteran shock trooper and commander of the emergency action team of the local police department. He seems to have a military background, and experience in covert operations.

He regularly trains and instructs in unarmed and armed combat. He’s reportedly competent in the use of any type of weapon. He leads his team rather well. His second in command is Corporal Schmeltzer, and his right hand men are Officers Webster and Ballantine.

He is also an eloquent speaker, although he tends to throw in lots of slang and odd metaphors, which muddies the message. Still, even superiors listen to his speeches, which is why he is relatively popular by them even as his record is far from spotless.

He seems to research attack tactics for every possible crisis situation before he shows up, and his hard-line tactics are famously being employed.

Lt. Hunter is the commander of the Emergency Attack Team squad (the district’s own SWAT team), of the police district in the generic major metropolis of the Hill Street Blues TV-series. He seems to have a military background, and mentioned having been in Việt Nam before enrolling in police activities.

According to one of our readers, Hunter is a Dartmouth College graduate.

As a commander he is leading a very heavily armed attack team. Unfortunately, he is often the brunt of many jokes, by members of the other divisions, due to his clumsiness and bad judgment, but manages to effectively lead his own team.

He is always up for a fight, even when there is none, and the appearance of the Emergency Attack Team is often excessive or unwanted.

Lt. Hunter is fairly popular with the hard-liner authorities. He remains a force in police politics to be reckoned with.

Lt. Hunter is usually clad in grey clothes, glasses, military hat, military boots, and a bullet-proof vest. Usually exhibiting a sober expression, and having a pipe in his mouth, he will show with his loaded-for-bear attack team.

Lt. Hunter is a conservative military nut. He prefers offensive tactics even when unnecessary, and is known to be excessively eager to attack perps. He stands for a hard-liner stance and does not believe in second chances.

He doesn’t much care for getting instruction from headquarters. He will take action into his own hands, and prefers to send in his whole team whenever a problem occurs and work independently on a problem. Apparently some people like his ideas since he has won an award for mental health, and he is seemingly popular with the higher authorities.

He is really clumsy, which is unsuitable in his line of work. He usually manages to leave the disaster area before anybody notices his mistakes. Perhaps his men are so used to odd disasters that they believe it to be a normal part of the work.

He appears to live for his work. He e regularly participates in training camps and other work-related curricular activities. Filling the pipe, smoking it and emptying it is a ritual for him, and is supposedly part of a professional image of himself that he presents to others (he is, in fact, something of an expert on tobaccos and coffee).

He seems happiest when getting access to new high-tech weaponry or vehicles, or when getting the go-signal from superiors. He also seems to go through moody shifts in the long term, and once even attempted to commit suicide once, only to survive when it turned out that his co-workers had removed the bullets from his service revolver.

He is generally fond of referring to people by their last name, probably stemming from his sense of professional images. He uses a somewhat odd choice of words in his speeches, and regularly displays hints of racist attitudes. Some would call him a bigot.

His trigger-happiness is regarded as a sign of strong leadership by his men. At the same time he displays surprisingly humane sides on a number of occasions, such as his inordinate affection for his Shar-Pei pup. Perhaps he was over-compensating for human failings in his social contacts. It might have been a MIA, in game terms, at its worst.

His philosophy is the complete opposite of Detective Henry Goldblume, who is a diplomatic, soft-hearted and well-meaning man (and no, they are not friends). He often argues with Cpt. Francis Xavier Furillo, his superior.

Although he may not agree with Furillo he will, being professional and a believer in the chain of command, take orders if they are repeated. Oddly enough, he is rather good at getting information from the Captain himself.

He is at good terms with Sgt. Esterhaus and discusses women with him, although it has to be mentioned that Hunter seems to loose his edge when involved with women. Still, he regains his equilibrium after some tobacco, coffee, and a field day.

Despite all this it has to be said that he is a very eloquent speaker, and it’s very important to present him as an officer with a Major in English and surprising sophistication. Whether you want a fight in the streets or not, you’ve got it!

(Getting upset) “Judas Priest, man, show a little light ! You’re a drug-crazed psycho and what’s left of your mind has been worked over with PCP and you want to rip my lungs out. Yeah, that’s it ! That’s it !”

“You know it, I know it, and every deek with wild hair knows it. I don’t support the man’s gutless politics, but he is the chief executive.”

“Frank, this is Hunter, and I’m in your squad room, and I must say that I am appalled.”

“The sort of pride I felt in Mekong rice paddies during service in Việt Nam … pride in fellowship… despite that conflict’s inscrutability.”

“If I were to write my memoirs, Snellkirk, I’d call this little episode ’prelude to oblivion’. It’s just a little symptom of this city’s deteriorating nervous system.What galls me is…” (picks up pipe) “That there is still time enough to save it…” (knocks on sewer wall and crap falls on Snellkirk) “…that’s disgusting.” (walks away)

“You’re blowing brown smoke at me, Frank… what is the operational tableau ?”

“This is one more example of the rampant unprofessionalism that is legend in this district, Frank. Judas, my boys shouldn’t have to put up with this. Not with the giggles of prankster-apes who have silly putty for brains and jelly where their manhood ought to be. Let’s put our bacon on the table, Frank. When it comes to discipline, your… ah, let’s face it, you’re just too damn delasting, too damn forgiving. You ought to focus on ideas, strategies, and command decisions. Division needs you. And this place needs an iron hand.”

Lt. Hunter: (his heavily armed team enters a supermarket with a hostage situation inside the meat-locker] “Maverick, it looks like we’ll be able to use an elevation of about point seven. Let’s see here… I think that we should put it down here by the canned fruit.”
Cpt. Furillo: (surprised) “No, no, wait, hold it with that thing !”
Lt. Hunter: “Well, well, well, Frank… it’s déjà vu. So much for rehabilitation, huh ?”
Cpt. Furillo: “What the hell is that, Howard ?” (points to a large weapon)
Lt. Hunter: “That’s a Soviet 109 incendiary rocket launcher. It’s Russian-made. And all the riot gear is from loan from the Stockholm Police.” (starts smiling) “What do you think, Frank ?”
Cpt. Furillo: “Loose it.”
Lt. Hunter: (looses smile) “Judas Priest, Frank. That’s an eight inch steel door. If those deviants think we don’t mean business then our ace in the hole isn’t worth a brown cue-tip.”
Cpt. Furillo: (getting upset) “What ace in the hole ?”
Lt. Hunter: (lights pipe) “Our plastic charges on the outer wall.”
Cpt. Furillo: “Howard… There are innocent people in that meat-locker so take a command : no Soviets, no plastics. Just secure the scene… period !”
Lt. Hunter: (looks in disdain) “The only secure scene is a neutralized scene, Frank. Of course, if that makes your palms damp, there is another way to go.”
Cpt. Furillo: (sighs) “And what might that be ?”
Lt. Hunter: “Hypothermia. It’s a well-known medical fact that you Latin types can’t take the cold.” (turns to team) “Saunders, you take the high ground. And, Lucas, you take the right one.” (turns back to Furillo) “What’s we’ll do is to bypass the main circuit regulator and hook up an auxiliary compressor to that freezer unit, and drop the ambient temperature in there to ten degrees below zero. As their body temperatures drop, they become disoriented, then drowsiness sets in, then sleep…”
Cpt. Furillo: (ironically) “… and then a slow… painless… death. Isn’t that right, Howard ?”
Lt. Hunter: “Well, if that’s what you want, Frank. My strategy was to waltz in there before that point and carry them out. Actually, it’s quite humane and conservative.” (shows Furillo a paper) “As this hypothermic time table clearly shows. It’s your show, Frank, but I’d hate to explain two shot-gunned hostages to the board of inquiry, much less their families. What do you say, Frank ? I can’t take them down any cleaner than that. Oh, you can’t cuddle with these types, we gotta take them out here, or we might as well all start speaking Español.”
Cpt. Furillo: “Ok, set it up. But I don’t want you to implement anything, under any circumstances without my express orders.”
Lt. Hunter: (sighs) “Ok, whatever you say, Frank. But that kid in there ain’t exactly Beaver-Cleaver if you catch my drift.”

Lt. Hunter is your archetypal, tough SWAT team member and can be inserted as a colorful commander in any metropolitan area. 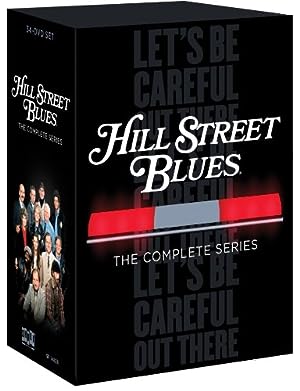 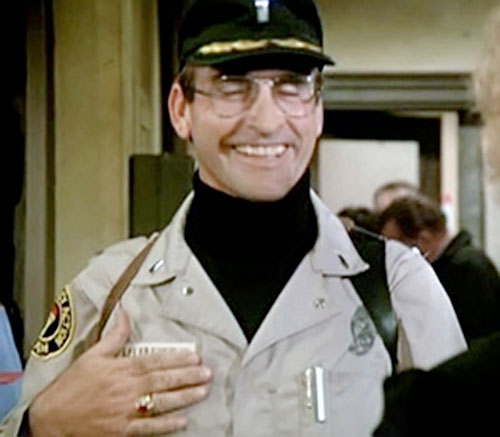 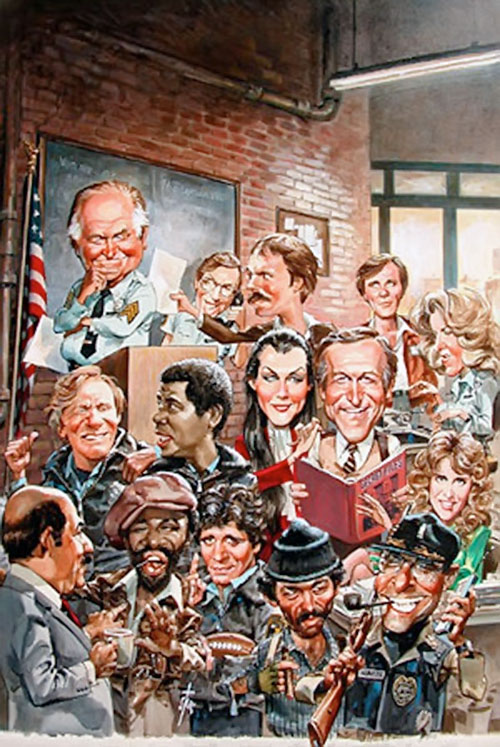