This is a chapter of our Weapons Locker – Body Armour series. A great and thunderous saga full of, err, well, body armour.

The start of the series is about the DC Heroes TTRPG rules for body armour. So DCH players should start there, to make sure they understand the stats.

These articles aren’t dual-statted for M&M for now.

All the disclaimers — particularly the one about trying to model body armour in GENRE FICTION, not write about historical accuracy — were in the aforelinked first article.

This article is in beta. I prefer to get the basics out of the way before I start doing the genuine research, since the basics are needed in so many character profiles.

This is makeshift and/or super-cheap armour. It relies on multiple layers of fabric and padding, perhaps with soft leather thrown in.

Another example is a fantasy setting with dirt-poor street thugs, or dirt-poor rural militia. Their armour would likely be horsehair padding (or packed straw) trapped between 2×2 layers of rough quilted fabric. 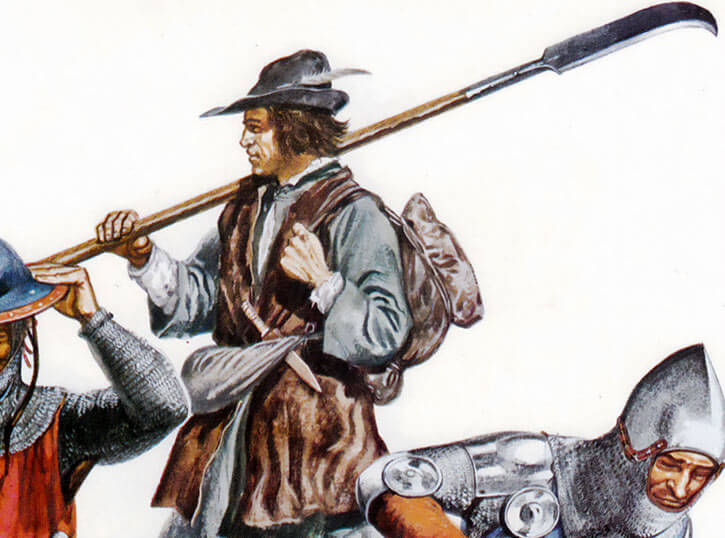 This feller with a bill and a fancy hat is a typical European peasant from a levy of the 1300s. Given the style, this uncredited illustration likely comes from an older Osprey book. The possibly-reinforced vest atop the multi-layered work clothing can work as visuals for crude padded fabric.

The same general idea, but done by a pro. The fabric will be tightly-woven, the quilting pattern will be just right for holding the “pockets” of padding (or perhaps glue will be used instead), the padding will be packed right, etc.

This sort of armour is, frex, associated with archetypal Ancient Egyptian warriors.

Even if, say, bronze armour is available people might prefer proper padded fabric armour. It is much easier to carry around, to repair… and to wear in hot climates. Ancient Scythian warriors apparently often did that.

It could also be gambeson. Gambeson is a padded layer normally worn under heavier armour in medieval times. But there are records of levies wearing just the gambeson as much cheaper, better-than-nothing body armour.

All levels of Partial Coverage would be common. 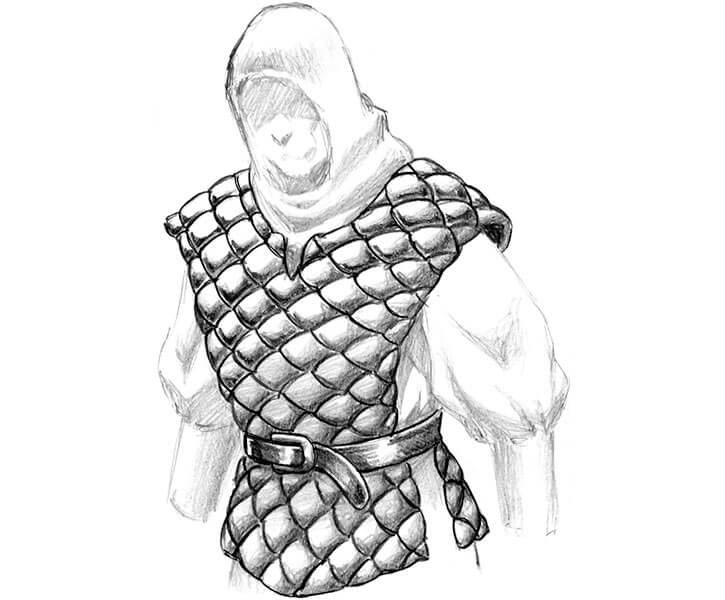 This relies on an important principle in armouring – multiple layers work better to resist penetration. Even fabric used for mere clothing, with multiple layers and adjustments, will be more efficient against knives and arrows than what most expect.

The “thin” version of this uses fewer layers, as it is worn in hot and humid climates.

A typical example would be historical Nahua (“Aztec”) armour, made of about three layers of rough cotton. It is then slightly hardened by immersion in brine water, as the salt crystals will remain embedded in the material once it is dry.

All levels of Partial Coverage would be common. 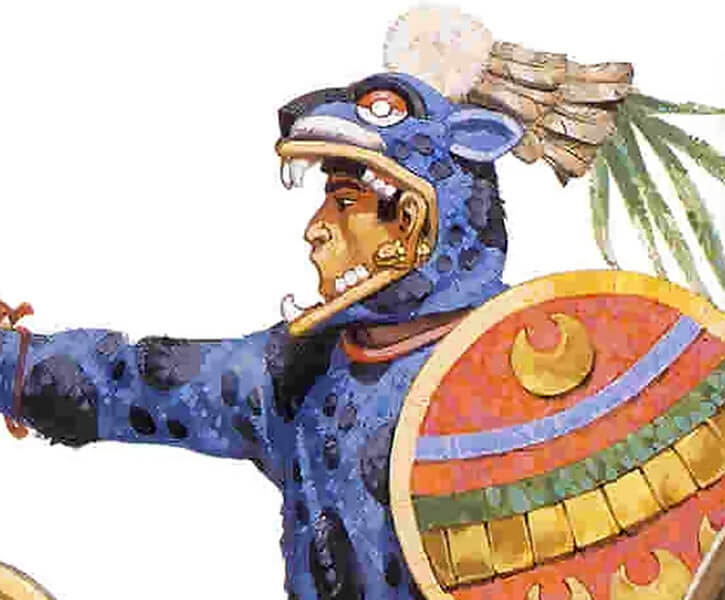 Typical visuals for a quilted Nahua onesie armour. Unsourced image (grr), but if I had to bet I’d say it’s from an Osprey Publishing book.

A typical European armour jack has 25+ layers of selected linen, plus one layer of deer leather to keep the rain out.

A well-made jack is more protective than leather armour. It is also useful for part-time commoner warriors, such as the medieval French free archers.

In some areas, it is more practical to pound the bark of certain trees to create a fabric called bark cloth, rather than use linen. But it’s about the same thing for TTRPG purposes.

Vest coverage would be common. 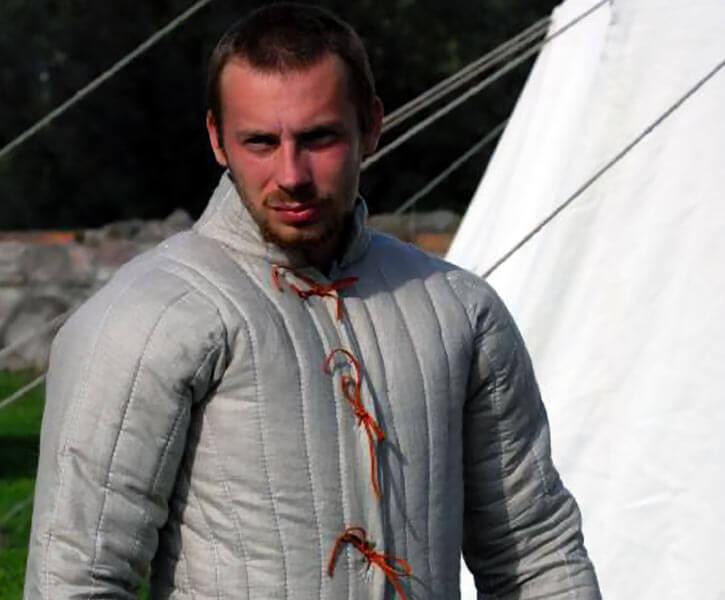 A replica for a many-layered armour jack, which looks about correct. From reenactement shop SPES Medieval Market  .

This is a specific example of layered linen body armour. It was worn by Ancient Greek warriors who didn’t have access to metallic hoplite breastplates.

Here are DCH stats for a panoply, namely : 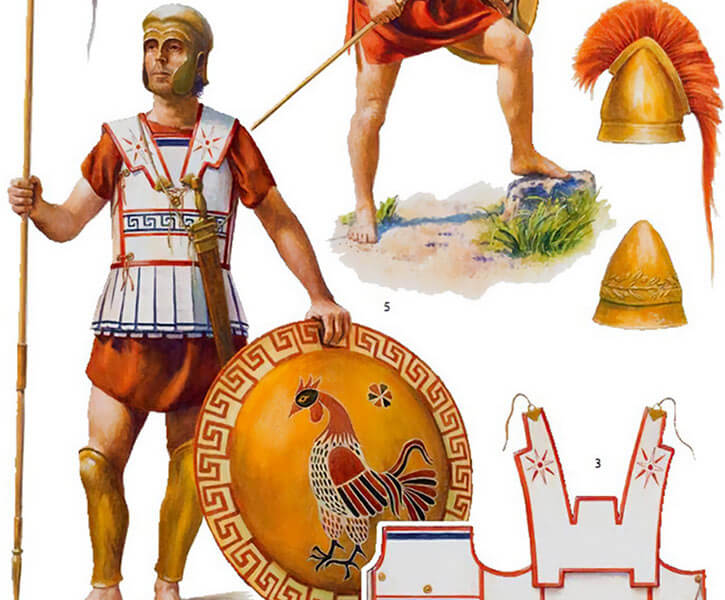 Here is a XVIIIth Century Korean (Joseon) equivalent of an armour jack. This specific vest-and-hat armour is kept at the Met  .

It’s 30-ish layers of tough cotton with hemp, rather than selected linen and leather. The hat is also reinforced with iron bands.

There are Taoist and Buddhist protective inscriptions as well. I *think* that the Buddhist one is the same mantra used by Thundermind. These could be important in setting with magic.

Attacks by French then American troops against Korea showed that this kind of armour could protect against small-calibre handgun rounds (in DCH terms, EV 03 ones) about as well as the arrow impact and sword blows they had been designed against. .45 Colt at close range apparently could penetrate, but it seems likely that common musket balls at a range couldn’t.

The stats are the same as an armour jack, but it’s not wrapped in leather. Which means an Attack Vulnerability (-1CS against fire-based attacks, and the rarer water-based attack) and a Drawback (becomes useless in heavy rain or after having been immersed). 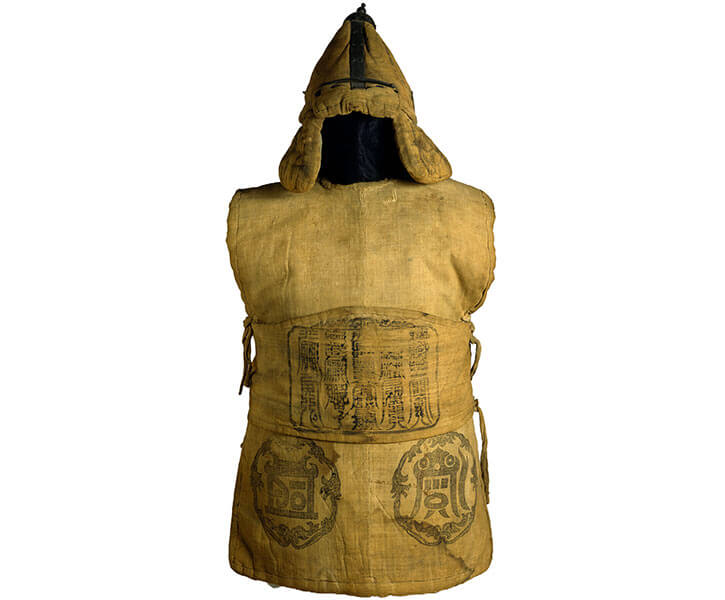 This is comparable to the thin quilted fabric armour, but using multiple layers of rough silk. This is done in areas where silk isn’t an exotic luxury good.

Silk is lighter than linen, and the fibres have a high tensile strength. Thus, it’s hard for a point or — especially — a edge to break them. By exaggerating this a bit for fiction purposes, we essentially get a concealable, soft, stab-resistant vest.

Will usually appear with vest-level Partial Coverage, but it’s certainly possible to make bigger ones. 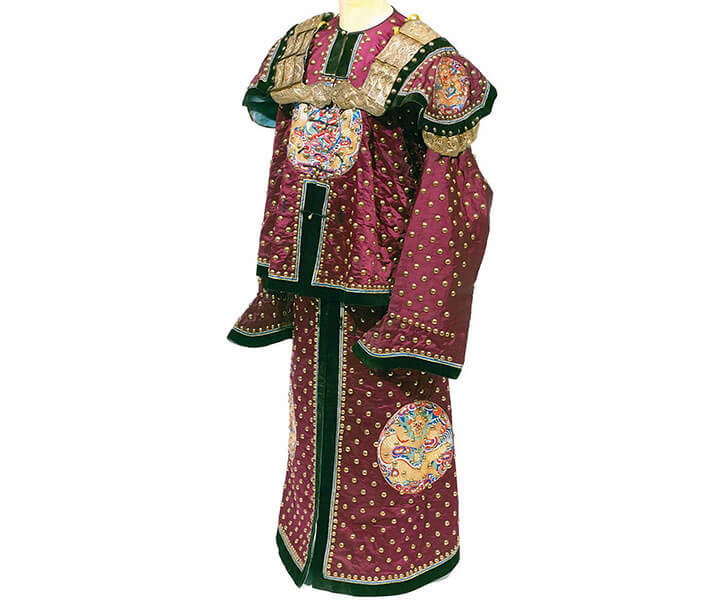 Chinese studded silk hauberk from the close of the Qing Dynasty (so, 1900-ish).

This is an exaggerated version of the silk armour above. Its surface is so smooth and, well, silky that arrows and knives may simply slide off if they come at an angle.

This might have a place in semi-fantastic settings, such as some wuxia adventures or the pseudo-Chinese realm in a pulpish, two-fisted adventure. Or simply the pulpish version of an “Oriental” country.

Frex, Indiana Jones stories are cinematic enough to have this sort of gadget. The stories of the Shadow or the Spider definitely are.

Will usually appear with vest-level Partial Coverage, but it’s certainly possible to make bigger ones.

These broad, stout sashes were worn by les Apaches. This was a violent Parisian subculture circa 1900, calling themselves that out of admiration for the North-American Apache tribes’ spirit of resistance.

These young toughs liked these sashes because they looked flashy. But they supposedly also had protective benefits. If stabbed in the belly with a low, upward thrust the silk could prevent a small knife from penetrating. It might also help prevent blood and viscera from getting out.

Did it work ? No idea, and to our regret we can’t legally run tests. But it’s a cool story, and stories are all that concern us here.

The Partial Coverage is there for a streetwise opponent not to knife where the sash is. And the low Blunting value means that it’s only likely to work for characters with Hero Points, who can LDD most of the damage and survive as the sash takes care of the rest. 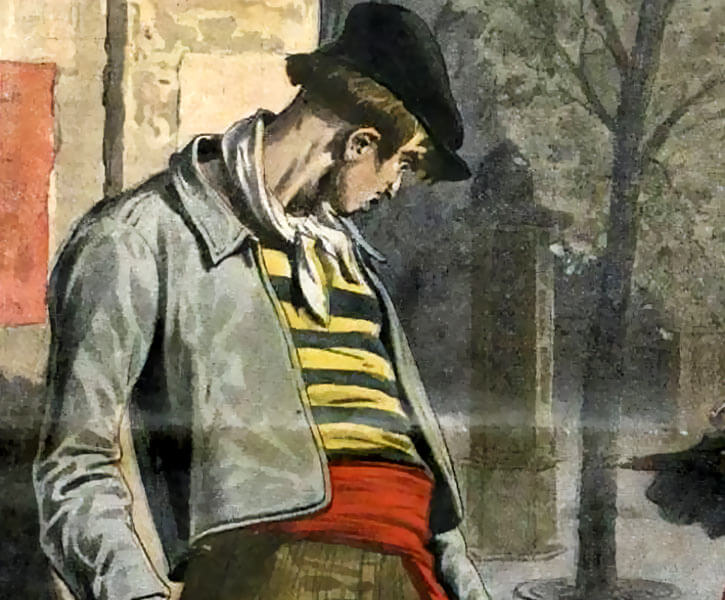 A ghost shirt is made of linen that has been made impenetrable (or at least super-difficult to shear and pierce) using a fantasy process.

It isn’t particularly thick – a few layers. Perhaps even a single layer in the more fantastic and magical settings.

Usually have the Vest-level Partial Coverage. The more fantastic/magical examples may have higher numbers.

It is not done using solely a boiling water bath. Yes, that makes leather hard, but also brittle. Rather, it is likely that it involved immersion into a boiling liquid using a local “secret sauce” and/or post-boiling treatments with the secret sauce.

This likely meant insect waxes and/or resins and/or powdered bones (for collagens). And maybe salts.

Thus, the core of “leather” armour will be a rigid leather breastplate. Then you can add other cuir-bouilli bits such as a helmet, bracers, greaves, a groin protector, shoulder plates, etc. over a soft leather jacket and trousers.

Strips or scales of cuir-bouilli can also be used to protect weak points.

This isn’t quite as protective as an armour jack. But it’s relatively close, lighter, and less bothersome when it comes to humidity.

In some areas, it may not be cuir-bouilli but instead the worked skin of particularly tough animals such as kangaroos, sharks, elephants, hippos, rhinos, giraffes… Such leathers can be remarkably resilient.

Partial Coverage (Jacket) would be common. High-quality leather armour will have one or two APs of Damage Capacity, and armour based on super-tough animal leather may have more Blunting. 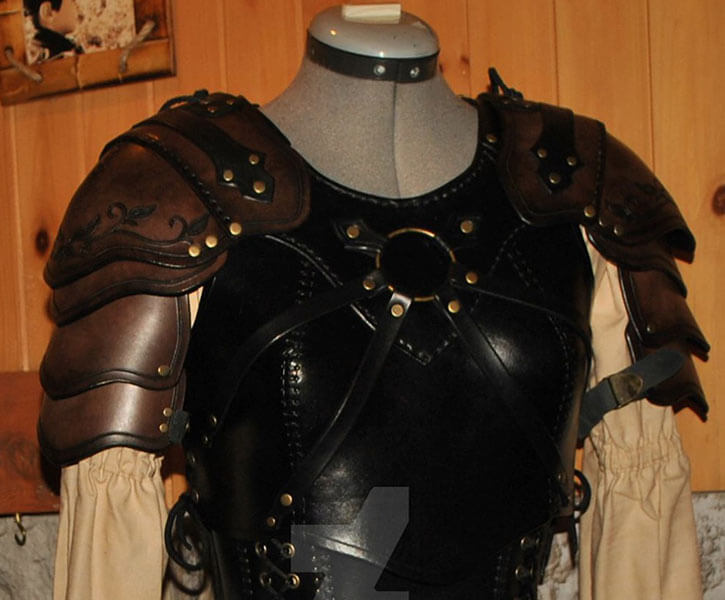 Heroic fantasy-style leather armour. From a French-Canadian costumer/leatherworker  . She’s got a shop too, if you want to tell the world you’re the sort of woman with an Armour Class of 8 (minus Dexterity bonuses).

Studded leather is hard leather armour with additional, metallic studs/rivets. This can place an additional bit of metal between an incoming blade and the wearer’s body.

As far as I can tell this is fantasy armour, and wouldn’t quite work in real life. But it is certainly well-established as fantasy armour. For instance, there’s studded armour in my 1978 version of the Player’s Handbook. So heh, go ahead.

Studded armour is likely the result a confusion caused by seeing brigandine. Or more likely, leather jackets styled to resemble those (more about brigandine in later chapters).

Some of the unusual leathers mentioned above, especially shark skin, may end up producing leather armour with “studded leather” stats.

Partial Coverage (Vest) would be common. 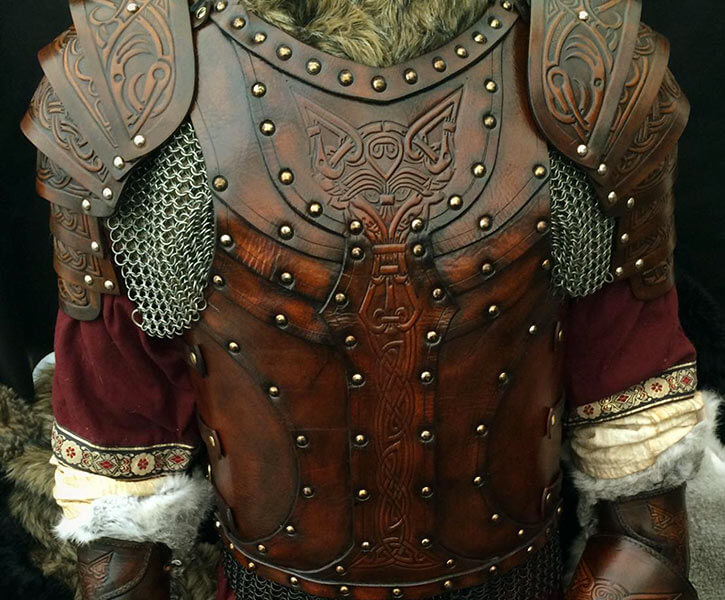 Here we’ll go with a fantasy example from this British LARP and props shop  . Perhaps the bits of chainmail come from wealthier, fallen enemies.

These is a set of four leather bands, studded with sharp metallic spikes. Two are worn over the forearms, the other two over the arms.

The inspiration for this is Liabeuf, a French Belle Époque worker. Condemned for a crime he did not commit, he became a cops killer – using a cleaver and a so-so revolver. The spiked armbands prevented policemen from grabbing his arms.

BODY 02, Enhance (OV vs. Grappling and Wrestling Combat Manoeuvres): 02 (cap is 06), Power Loss (Enhance isn’t applicable if the attacker has a RV of 07 or more against Physical Attacks with a Piercing Descriptor). 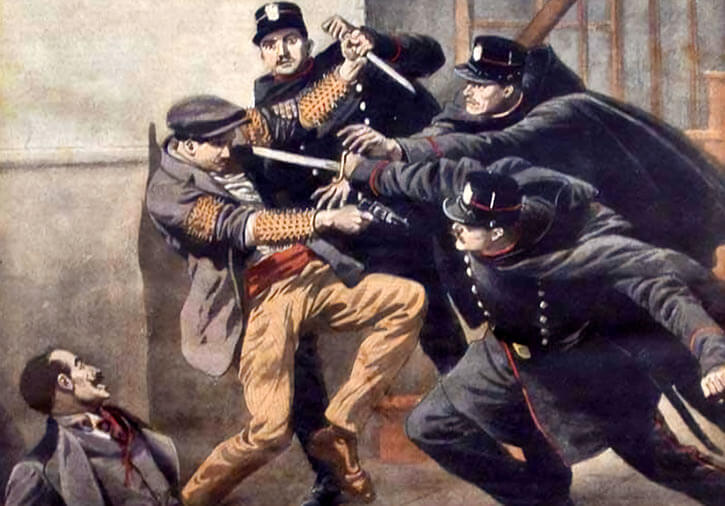