Lightbright can fly and has energy/light/heat emission powers. She also is a good athlete and fighter in excellent shape.

She once created slightly mesmerising, calming light shows. However, it is unclear how much of that stunt was made possible through the power of the Goddess. It was thus conservatively left out. If the GM decides she could repeat that stunt, Broadcast Empath (limited to contemplative bliss) at about 07 APs with an 3 APs Area of Effect is a good guess.

Lightbright was first encountered as a member of a band of nationalistic Somali superhumans called the Bio-Genes. The BGs clashed with Silver Sable International, whose troops were in Somalia for a humanitarian relief / photo op operation.

At that point, the Goddess’ Infinity Crusade  was ongoing. It had a strong effect on the peacefulness or aggressiveness of people all over the cosmos. As part of this cosmic influence, the SSI troops, nearby US troops and the Bio-Genes eventually united against a HYDRA assault led by Baron Strucker.

Lightbright apparently started a relationship with Battlestar during his stay in Somalia. She soon signed on with Silver Sable International’s superhuman squad, the Intruders. She then moved to the US and Symkaria to stay with Battlestar.

Lightbright acts nobly and is mostly a pacifist. She fights non-lethally, and only when it becomes obvious that it is the most rational course.

She seems quite proud, classy and generally above it all – a bit like the exotic princesses of pulp  literature. She disapproves of sexism and men rudely gawking at her as much as she dislikes wanton violence.

It is possible that she’s some sort of rastafarian. Though she is much, much more of a feminist than most rastas.

Lightbright speaks in a formal, articulate way. Perhaps she learned English from textbooks mostly quoting from Shakespeare, Stan Lee or some other classic English language writers !

“My name is Lightbright, and though I could end your lives as easily as you end others… I seek only to bring peace to you. It seems that such rational concepts are lost to you, so I must show you the errors of your ways.”

“This incessant gawking at the female form is most rude.”

She could be a Global Guardian. 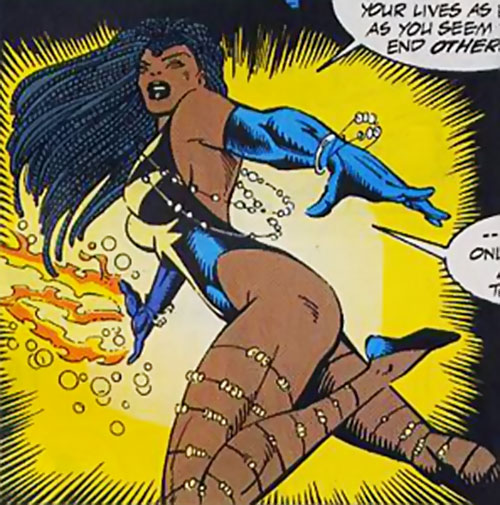 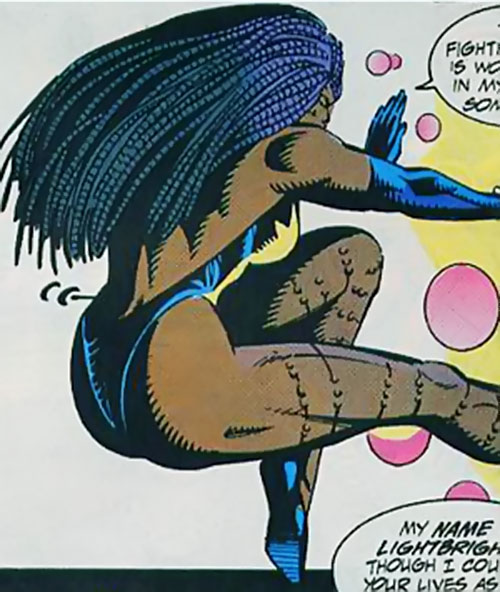 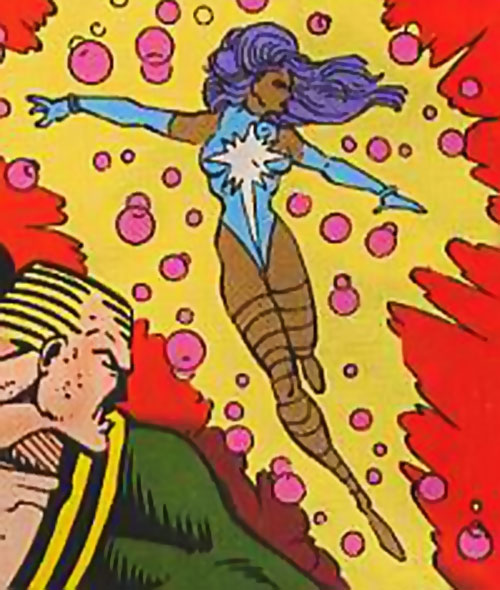