This profile is meant to be read after the Power Pack team profile.

Julie has the gift of unassisted flight. While her top speed is unknown, she managed to break the sound barrier with effort.

Lightspeed can generate enough thrust to carry herself and approximately 50 pounds (23 Kg.) of additional weight before it starts impeding her ability to fly.

Like all members of the Power Pack, Julie’s body heals at a highly increased rate. She can fully recover from broken bones or sickness within days. With concentration, Julie can greatly increase this healing factorThe power to heal wounds and regrow tissues, like Wolverine.

Julie wears a special uniform (created by the smart-ship Friday). It is stored “Elsewhere” until she commands it to materialize. The costume :

The costume also has pockets which are actually apertures into an adjacent dimensionOther realms of existence that are not our universe. Julie can store and retrieve objects from the pockets which clearly should not be able to fit within them. The maximum carry capacity of the “magic” pockets is currently unrevealed. 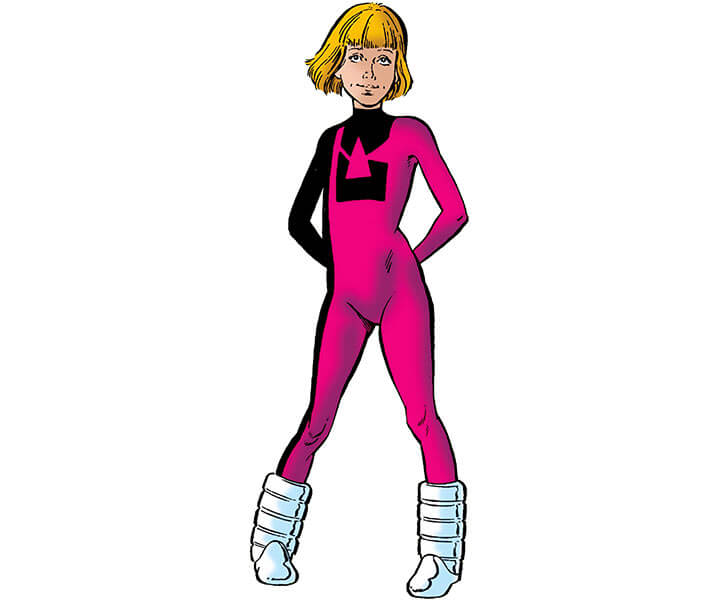 She has the appropriate build for a youth her age and height, with none of the hints of awkwardness that often accompanies the tween years of many children.

Unlike her siblings, Julie usually has a serious countenance. She quite often appears pensive.

Julie’s costume is a bright pink unitard that covers her from neck to boot. The right sleeve of the unitard is pitch black, as well as a stripe that runs down the right side of her body and a square patch that runs from her neck to the middle of her torso.

Within the centre of the black patch on her chest, is a stylized picture of a beam of light being refracted through a triangle. (Because aliens always like Pink Floyd. It is known – ed.).

A pair of silver ridged boots complete her costume. These are reminiscent of those an astronaut may wear.

When using her power of flight, the energy she projects behind her to generate thrust leaves a rainbow coloured wake. 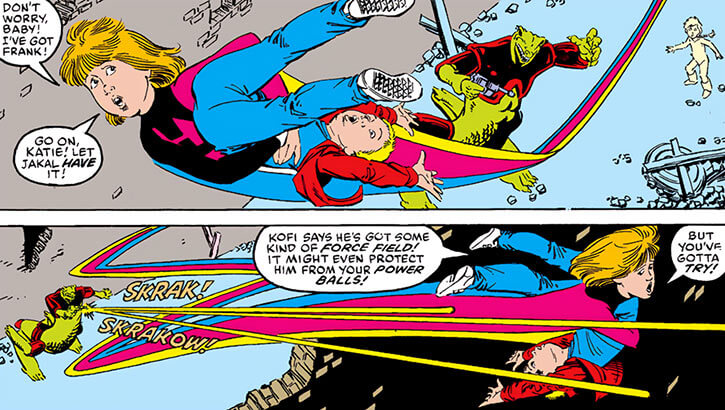 Julie acts as the den-mother and conscience of her siblings. She always has words of warning or advice for everyone (in other words, she takes charge), Alex in particular.

She worries intensely about her siblings’ safety. She openly yearns for a return of normalcy for their lives.

More than any of the Power siblings, Julie struggles with her confidence and seeks to establish her identity among her peers. Julie worries that her powers aren’t unique enough and that her siblings will continue to outshine her in other aspects as well.

She is actually quite jealous of Alex’s natural heroism, Jack’s ingenuity and precociousness and Katie’s undeniable charisma.

Despite all of that, when push comes to shove, Julie is as brave and selfless as any of her siblings. She will put her life on the line to save innocents.

“We’re home ! Everything’s just the same… just the way we left it !”

“So little brother, you did go looking for Spider-Man yesterday ! I knew it, you liar !”

Julie and her siblings could be imported wholesale into the DC Universe where they would most likely be raised in Metropolis.

There they would end up encountering a myriad of superhuman beings. The foremost of whom would be Superman, of course.