A spoiled rich girl who’s a pretty decent brawler – with a unique custom fighting style that mixes in gymnastics and ballet.

Lili’s fighting style is a self-taught original fusion of:

This certainly isn’t the most refined or efficient style. But it has a high tempo and some surprisingly good techniques. 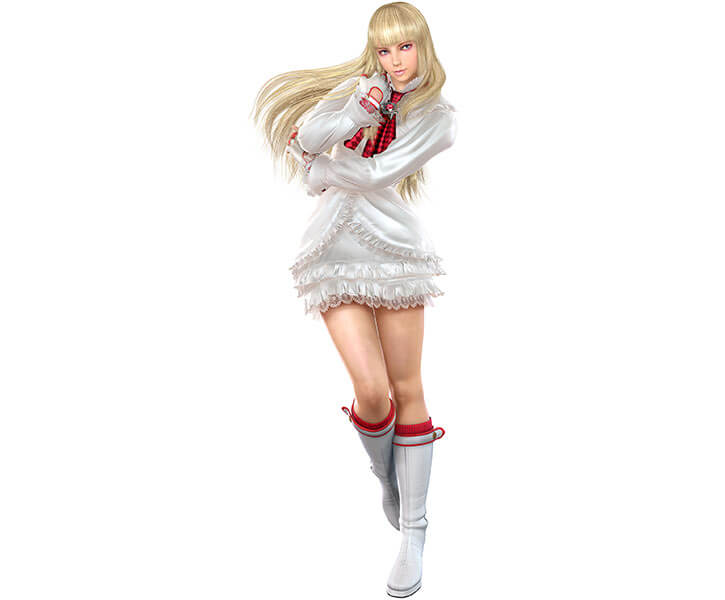 That said she’s generally considered to be a beginner character. She’s easy to pick up and play, but while she’s great at dodging her attacks are also easily dodged. They don’t have the homing properties that many of the other fighters enjoy.

And while her combos are easy to pull off and do great damage, many of them are predictable. They can be easily countered by more experienced opponents.

She also lacks good low attacks. But conversely she has some great moves to avoid the low attacks of others. And some excellent punisher moves to attack downed opponents with her kicks and acrobatics.

While she might have a screw or two loose and be generally disconnected from reality she does know how to recognize the luxuries in life. De Rochefort would likely have no problems fitting in at any kind of fancy formal event.

(Fitting French music from 2006 includes Émilie Simon’s third album Végétal (“The Flower Book” in the US). The heavier tunes aren’t a good match for de Rochefort, but the little ditty “Opium” is – ed.).

Émilie de Rochefort — or as she’s more commonly known “Lili” — grew up in fairly idyllic life. She wanted for nothing as her father was a wealthy oil tycoon in Monaco.

From a young age she was fascinated with martial arts and combat sports. But her father, an ardent pacifist who abhorred conflict, refused to let her taking any lessons of the sort.

She was however free to take any other lessons she wanted, and showed a talent for both gymnastics and ballet from an early age.

(At no point in her history is her mother ever mentioned. So it’s generally assumed that she was never in the picture).

When she got a bit older her father allowed her to jaunt around the world using a private jet and a limitless credit card.

At one point she was kidnapped and held for ransom. But the criminals got far more than they bargained for. She shook loose and beat the crap out of them. This only further served to stoke her interest in fighting.

But she also displayed a knack for street fighting. She was able to fight her way out of quite a sticky situations. And if that didn’t work then she could always buy her way out. 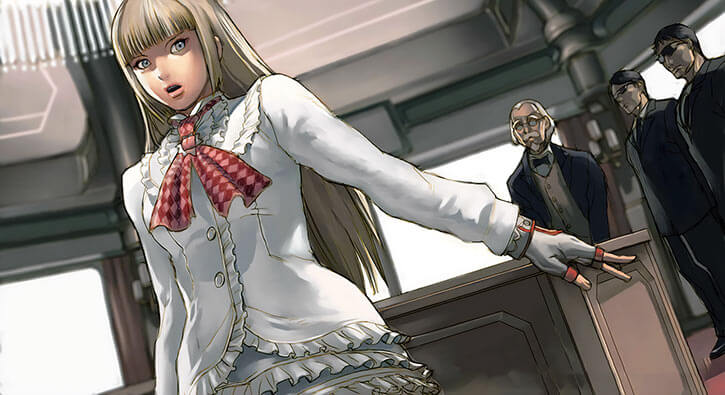 After beating Forest Law in a San Francisco street fight, she received an invitation to participate in the next King of the Iron Fist Tournament.

She was both perplexed and intrigued by this. Quick research showed that the Tournament was being hosted by the Mishima Zaibatsu. This mega-corporation had been trying to strongarm her father into selling his oil fields at well under their market value.

She realized that this would be a great opportunity to fight some worthy opponents. As well as possibly stick it to an organization that had long been a thorn in her family’s side. Without a second thought she lied to her father and said that she was merely taking a vacation to Japan.

De Rochefort washed out of the tournament early. She was beaten by another newcomer around her age named Asuka Kazama, who was the heir to the Kazama Dojo and a relative of the previous fighter Jun Kazama.

Lili didn’t really take the loss well. From there on out she considered Asuka to be her rival.

Lili’s father found out that she participated in the Tournament. Furious, he grounded her. This prevented her much desired rematch with Asuka.

However the global conflict escalated. The Mishima Zaibatsu took over her father’s oil fields by force. Her father’s company fell into disarray, and he was hospitalized due to various illnesses brought on by the stress.

This freed Lili to take another crack at getting revenge on the Mishima Zaibatsu for meddling in her family’s affairs.

However, she didn’t really seem to have an impact on the main story.

In the scenario campaign she assisted main protagonists Lars and Alisa. She gifted them with an SUV after meeting them in a harbor, then went home. 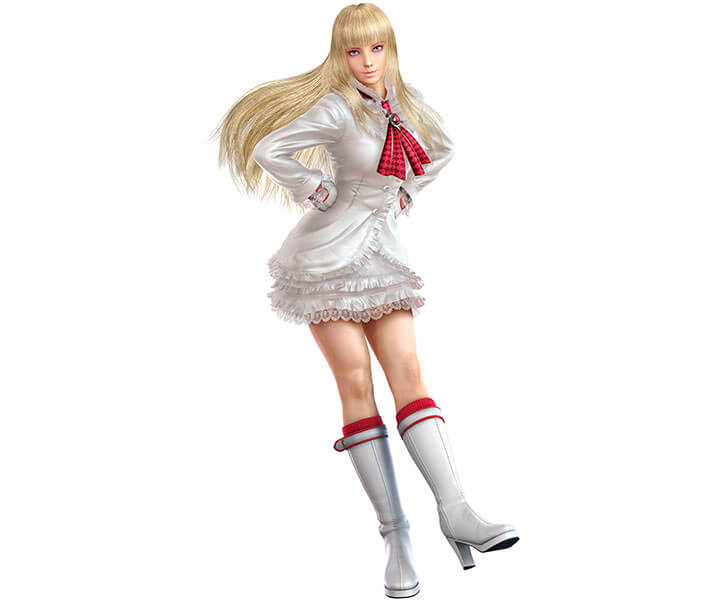 Still thirsty for revenge against the Mishima Clan and hungry for another crack at Asuka she entered the tournament once again – without telling her father. She couldn’t believe her luck when she got a chance to fight Asuka on the very first round.

The outcome of the fight is currently unknown. It is presented in endings, and who wins depends on who the player chose as their character.

It does seem unlikely that Lili won the rematch as she’s considered one of the lower tiered characters. But Eliza — another new character — did have an ending that opened up interesting possibilities for Émilie.

Eliza was a 1,000 year old vampire. She had gone to sleep in the Rochefort family estate’s basement and woke up 600 years later with the world vastly changed.

She was shortly thereafter taken prisoner by Claudio Serafino and his Archers of Sirius. But she managed to free herself and vanquish her foes, which led her to an interesting meeting with Lili.

Eliza claimed that Lili and her were actually sisters. But being severely narcoleptic, she fell asleep before she could elaborate.

This claim seems highly unlikely since Lili is a mere 16 and Eliza is 1000 years old. But this plot may be picked up in the next installment…or not.

It’s actually difficult to tell, as Eliza has barely any storylinek. Her creators seemingly put way more time into the appearance of a hot vampire chick than they did her story.

She sports what’s known as a hime-cut (princess hairstyle) with long perfectly straight bangs and some side locks that have been cut perfectly as well.

This style is popular with Japanese upper class women with long hair. But there has been some overlap between French and Japanese styles as they consider themselves rather sophisticated cultures and both countries have influenced one another when it comes to fashion in the past.

As a spoiled teen coming from privilege Lili can only be seen wearing nothing but the latest trends in designer clothing. She seems particularly fond of miniskirts and corset like tops and tends to favor the color white primarily. But she does also seem to like pink and shades of red as well for some of her accessories.

She also does wear a bit of make up as well (no doubt high end designer stuff). In particular she usually wears pink lip gloss and red eyeliner. 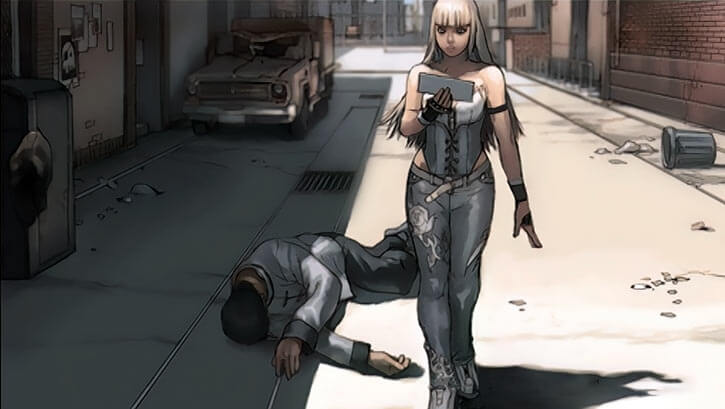 Lili really is something else.

She’s an immature spoiled teenage brat that has had everything handed to her on a silver platter from birth. She frequently talks down to other characters and often refers to them as peasants and the like.

Quite a few of the other fighters have commented that she seems to have a screw or two loose. She does seem completely disconnected from reality.

She’s overconfident and shows a bit of sadistic streak. Even though she’s one of the lower tier, less experienced fighters she talks quite a bit of trash. She has referred to other opponents as “toys to be played with.”

That said she is occasionally able to mask some of this extremely off putting behavior when she makes an actual effort. Her upper class upbringing gives her all the tools to mask her contempt and put on a classy veneer of etiquette.

She is passionate about fighting and loves street fighting as a sport. But it also seems highly likely that she’s not fully aware just how dangerous her little hobby is.

She does share a fierce rivalry with Asuka. But even that seems one-sided as Asuka has bigger fish to fry by protecting both her family name and her neighborhood.

With all that said deep down inside there is hints that she does have some compassion. She seems to care deeply for the wellbeing of her father. She has been known to perform acts of charity such as giving Lars and Alisa an SUV when they were in desperate need of transportation.

Oh yeah, and she frequently takes tea breaks and drinks out of fancy little cups like a total snob. 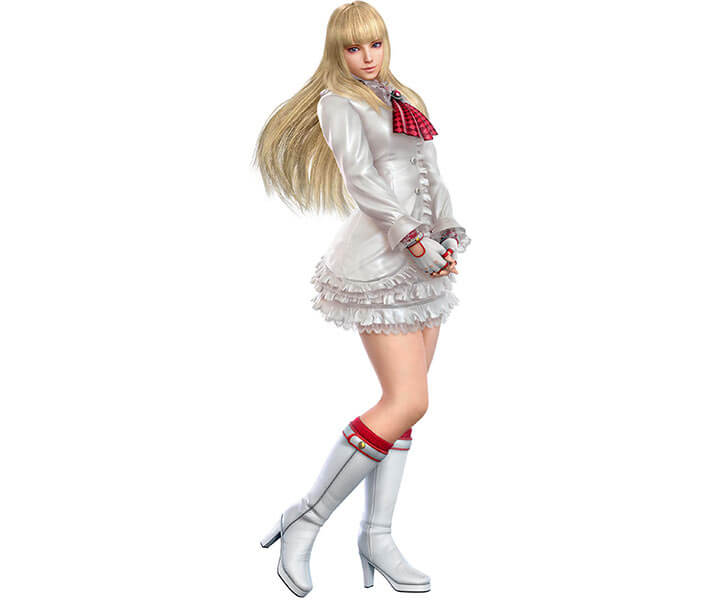 (Laughs) “You surely don’t believe… you can beat me ?”

“How long can you stand my attacks ?”

“This is a great place to fight, don’t you think ?”

Not much going on in Monaco so you can just plug her in as is. Feel free to replace the Mishima Zaibatsu with Lex Corp or something similar.

Cue a lot of eye rolling from various heroes that she would inevitably encounter along the way as they may actually be forced to work together as a sort of “the enemy of my enemy” type deal.

She might even get recruited by some of the junior villain groups. Only to walk away in short order cause that’s like hard work and no fun and stuff. 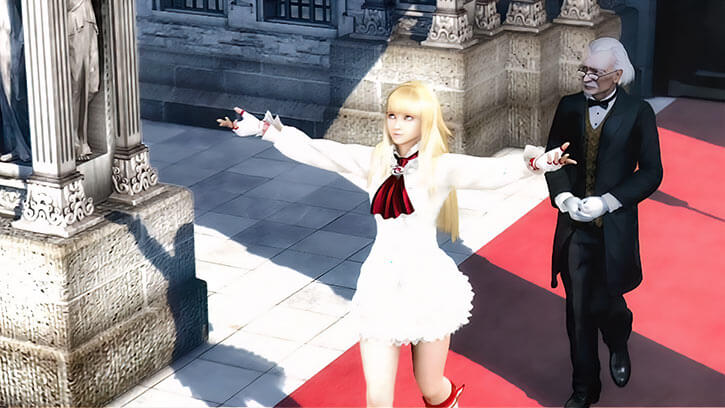 Her Wealth is a bit of a question mark. I ball parked at 008. She doesn’t have the Rich Friend Advantage as her father seemingly gives her free reign over the family’s resources.

While her family may have fallen on hard times for the obscenely wealthy she does have plenty of access to private jets and yachts, so they’re presumably not going hungry any time soon.

In her intro appearance her Wealth could’ve been as high as 12. She seemed to have Batman levels of money.

Notes: While technically only 16 years old the Age (young) Drawback is almost a moot point as she has easy access to more money than most people will see in a lifetime. Also despite her personality flaws she is actually capable of blending into high society and appearing both adult and mature when she makes an actual effort.