Unless you’re well familiar with the Borderlands universe, this profile is intended to be read after our Borderlands setting article.

Lilith is an agile, fast, precise gunfighter. This is the usual role for the one female character in shoot ’em up games.

She favours light, close quarters automatic firearms. Howbeit, she will often start an engagement with sniper fire to thin enemy ranks before they can rush her.

She also has a special pass to use the Catch-A-Ride vehicular digistruction stations. 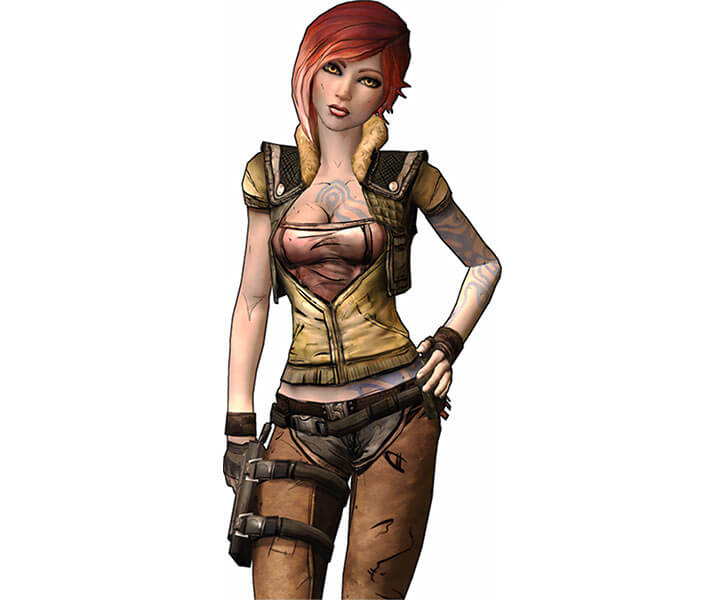 As a Vault Hunter, Lilith carries some of the best combat equipment money can buy.

Here are typical examples, based on my Borderlands playthrough.

See our technical Borderlands document for more about these.

Lilith has bona fide superhuman powers. She is the most powerful among the four Vault Hunters.

Her main superhuman ability is to tear open the fabric of space with her hands. Stepping through the tear, Lilith can briefly be “under” the normal world. She calls this “phasewalking”.

During this short-lived effect she is intangible, invisible, regenerative and about as fast as a sports car. 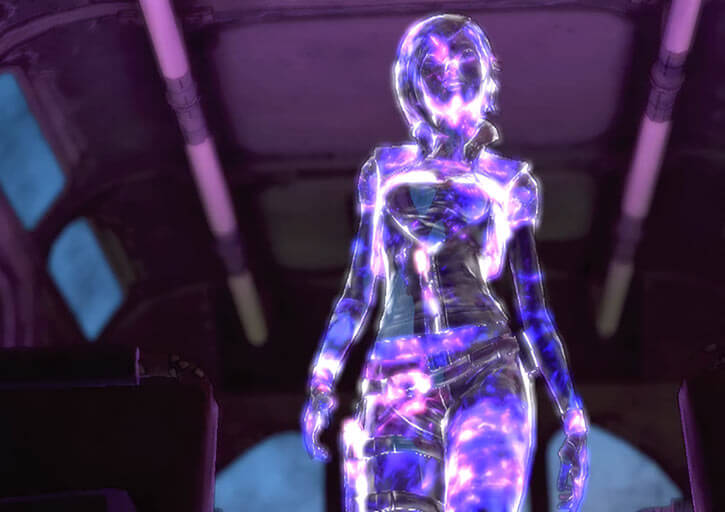 Lilith can also squeeze space within her hand, producing a smaller deflagration. That can be timed to occur when she punches something.

These warp punches can be quite powerful.

Lilith also has a superhuman affinity with Eridian “elemental” energy. She can :

Opponents she’s shooting thus have a hard time fighting back. And those close to her will burn. This further encourages close-quarters, all-out shock tactics.

Spotting a place where Lilith has been fighting is trivial.

Putting some Phoenix on seems logical for Lilith. And an older track — School rules — ain’t a bad fit. Plus, it’s short and punchy.

In Borderlands 2, Lilith has apparently been consuming Eridium for a while. This has amplified her powers :

I would assume that starship engines, like firearms, incorporate Eridian tech. This would explain why supercharging Sanctuary’s engines worked like supercharging the Vault Key.

Consuming Eridium seemed to give her a rush, and there’s a sense that she was jonesing for a chance to burn some more. But if there’s an addiction it didn’t seem to hamper her. 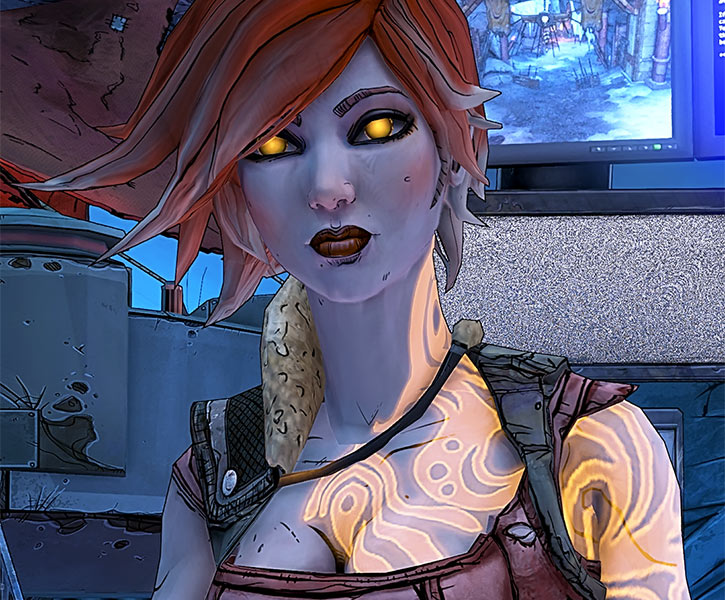 We have some information from a comic book published by IDW. However, the comics don’t seem to be canon, perhaps, possibly.

What is shown in the comic :

At that point the readers are shown two Sirens in robes, Maya, and Commandant Steele. Steele is stated to have “strayed from her path to cast despair”. Everyone but Steele’s eyes are orange, including Lilith’s before the power transfer. This seemed significant back then, but later games have Sirens without orange eyes.

The three main hypotheses as to why Lilith came to Pandora :

In any case Lilith criss-crossed Pandora, becoming one of the deadliest Vault Hunters on this broken planet. Over time she acquired ties with fellow badasses Roland, Brick and Mordecai.

From the comic, it seemed that Lilith started a relationship with Roland early during the events of Borderlands. They broke that off somewhen between BL1 and BL2. 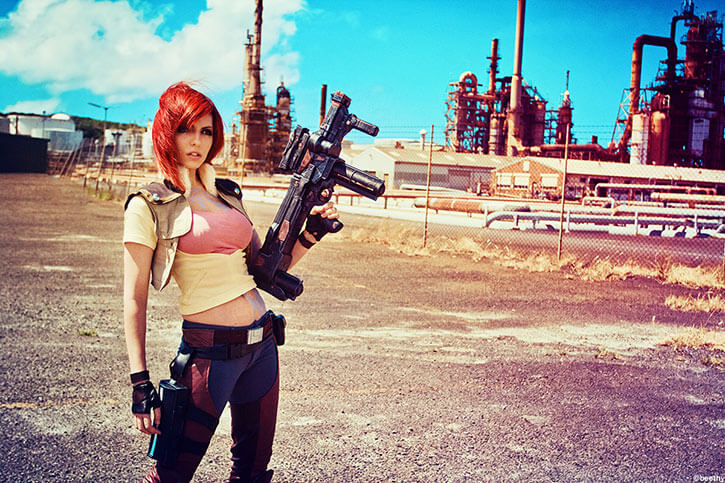 Photo courtesy of, and featuring, Yasemin Arslan  . If her features seem familiar – yep, it was her in the short BL2 sequences where Lilith communicates using Angel’s systems..

The element of surprise

When Hyperion started conquering Pandora, Lilith reportedly was among the casualties at New Haven. But she had actually survived.

Her death was kept a secret, so she could be Roland’s hidden weapon. Lilith moved to a secret base in Frostburn Canyon. As the dreaded bandit “Firehawk”, she’d annihilate bandit clans threatening Sanctuary, leaving no witness.

During that span, Lilith discovered that the emerging element, Eridium, boosted her powers. She started collecting nuggets of Eridium, keeping them in reserve for tough situations.

A cult of bandits formed to worship the Firehawk – they do that a lot. Lilith mostly ignored them, as they posed little threat.

Later on she’d discover that they had been graduating to kidnapping and human sacrifices, forcing her to destroy the Cult of the Firehawk.

You’ll believe a town can fly

A major bandit assault eventually exposed the Firehawk. Lilith moved to Sanctuary to join its protectors – the other three former Vault Hunters, and the Crimson Raiders militia.

When the city seemed about to be destroyed by Handsome Jack, Lilith almost single-handedly saved the day.

Lilith continued to help run operations in Sanctuary, helping Roland and a new generation of Vault Hunters strike back at Handsome Jack. 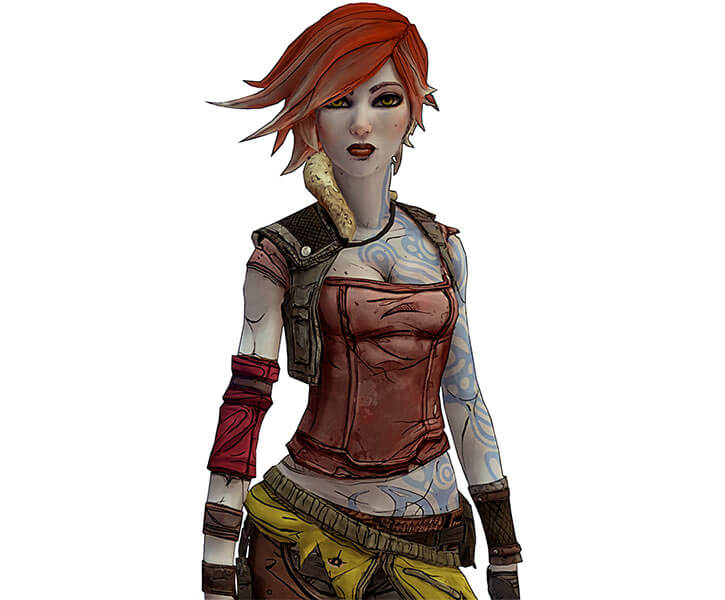 As they prepared to deny the Vault key to Handsome Jack, Angel warned Lilith not to participate in the field op.

Wanting to kill Jack, Lilith disobeyed and teleported in. She assisted in the fight to let Angel have her death.

However, Handsome Jack then came in. He murdered Roland by surprise, and captured a shocked Lilith. Using the equipment designed for Angel, he could keep her incapacitated… and charging the Vault Key.

The Key was thus powered to capacity, allowing Jack to free the Warrior. But the draconic creature was killed while it was still weak enough, and Lilith freed herself in the meantime.

With Roland dead, Lilith had to reluctantly assume leadership of Sanctuary.

Lilith is a smol, athletic woman somewhere in her 20s. Since her buddies are tall and often beefy dudes, she looks tiny when they’re around.

She sports low-riding skinny jeans and a low-cut tank top with a push-up underneath. This is both for general sexiness and to show off the swirling patterns covering half her body.

Her skin is particularly pale, and never tans. Her eyes are a sort of desaturated, light orange.

The “tattoos” on her body light up when she’s absorbing energy from Eridium, making it clear that they’re not actually tats.

Lilith has numerous small scars over her face and body, though they are all well-healed. They seem to have been deliberately kept to show off.

Lilith’s laugh is distinctive. Here is a 15-seconds video illustration.

(Borderlands 1 has little voice work for the Player Character. Yet veteran voice actress Colleen Clinkenbeard  still managed a memorable performance with next to no material.) 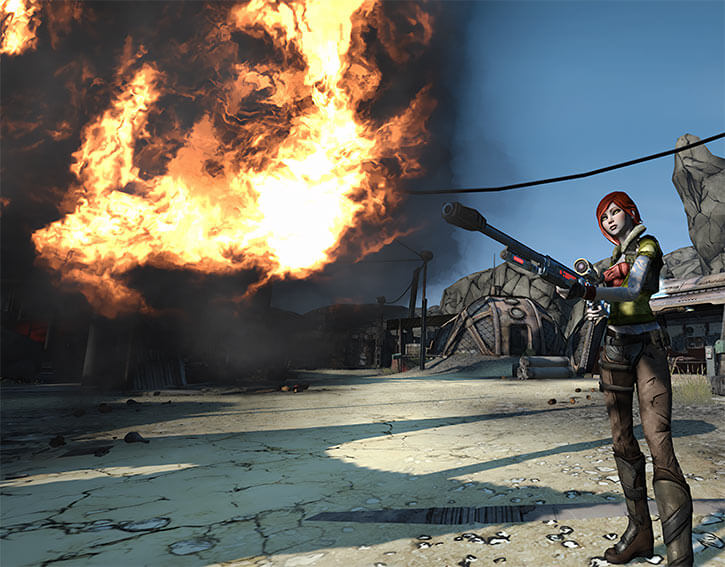 Lilith is an unruly, flippant, impulsive lass. But she does mature between BL1 and BL2.

She’s generally benign. Perhaps even a bit caring – which on Pandora is the equivalent of sainthood. She doesn’t care one bit about combatants dying, and likes chaos. But she’s invested in protecting Sanctuary, her friends, and defenceless persons.

This may have been Roland rubbing off on her. So to speak.

Lilith’s main arc early during BL2 is her failed relationship with Roland. Both are just… clumsily clueless, with the emotional know-how of tweens.

Lilith seems needier and interested in resuming that relationship, but that goes nowhere. She does come up with strategies to act catty, foxy or other furry animals-y, but that’s on the level of what a little girl would try.

She was flattered that there was a cult about her. She found excuses for them even as they came up with ceremonies where they incinerated each other. But once it became clear they’d murder innocents, she reluctantly dropped the hammer. 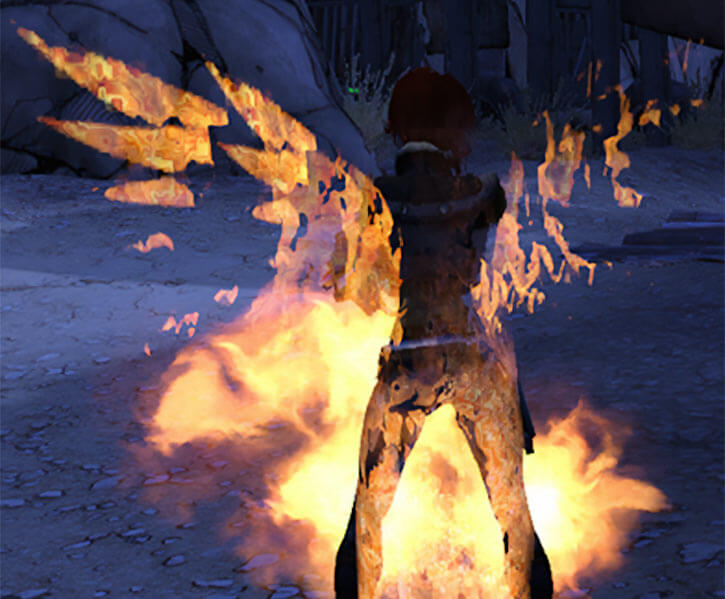 The phoenix effect is kinda hard to photograph.

Ain’t no reason why Sirens couldn’t exist in the DC Universe, though there’d probably be just one on Earth. You just have to tie them to an alien species.

Krypton or Mars would be a bit on the nose. But tying them to the Third World — the gods preceding Kirby’s Fourth World — could work.

Alternatively their powers could be magical, with ties to the Pre-Dead.

Or they could have been a small Zamaron experiment. 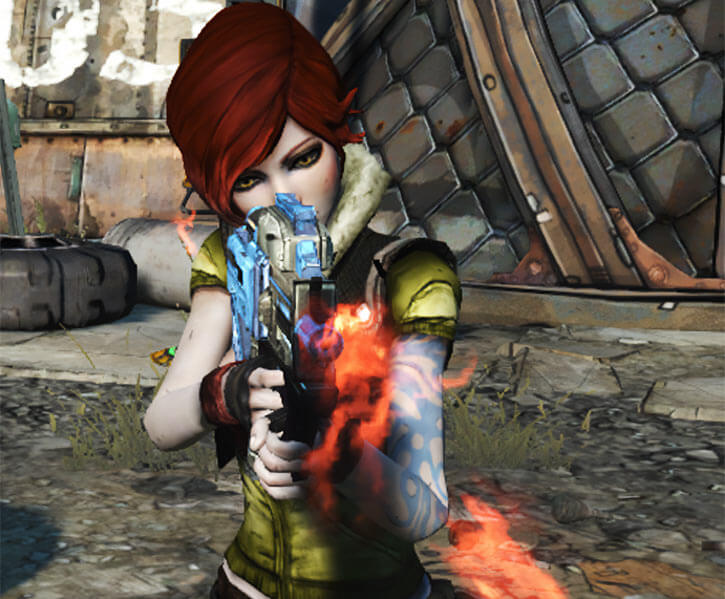 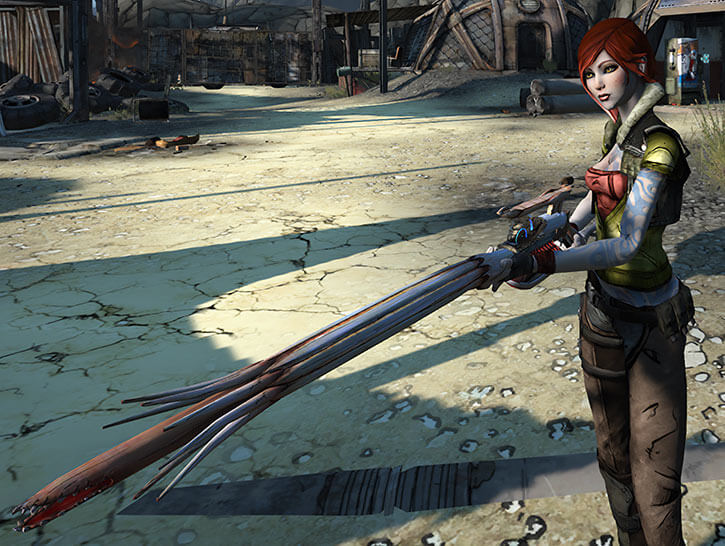 Her BL2 Powers aren’t super-clear, but I guess that :