I’m assuming that Sekhmet (and Bast) are genderless entities, and will thus use the usual neutral “they”. In the story the Lion God seemed male, but traditionally Sekhmet is a goddess, so let’s just go with “they” and call it a day.

The Lion God is an unusually powerful god-like being, much like Thor. They move with massively superhuman speed, agility and power, and have a host of magical powers.

Their energy-emitting totem stick could fell any Avenger in one blow, though Thor did get back up through sheer willpower.

Sekhmet needs to possess and freshly-killed human’s body to manifest on Earth. This may not have been the case back in their heydays.

After Thor destroyed the Lion God’s mighty totem stick, Sekhmet armed themselves with a giant spear. It could project energy beams from the haft, but was less powerful than the totem stick.

The Lion God is normally pretty big (04 APs of Growth in DC Heroes terms). If angered enough, they can become an even bigger giant — like they did during their second fight with the Avengers. In this form, Thor’s hammer bounced off their chest.

Sekhmet can also briefly appear in two places at once, though the range is but a few metres. Though the two Sekhmets look identical, one is the mortal body being possessed and the other is the godly form. This trick is thus chiefly useful as a decoy.

Sekhmet could control minds and take over crowds through simple concentration, even taking control of T’Challa within seconds. However, the narcissistic Sekhmet wants respect and fear rather than artificial obedience. Thus they will seldom use their mind-control powers for long.

The Lion God was also easily transfixed by rhythmic movements and lights.

It is not clear why Sekhmet was so powerful. They could maul even Thor, who is one of the most powerful gods aside from pantheon heads (usually sky gods).&

Maybe they kept hoarding the mystical energy from worship to turn it into personal power. This would help explain why veneration of the Lion God faded away whilst the cult of Bast remains strong. 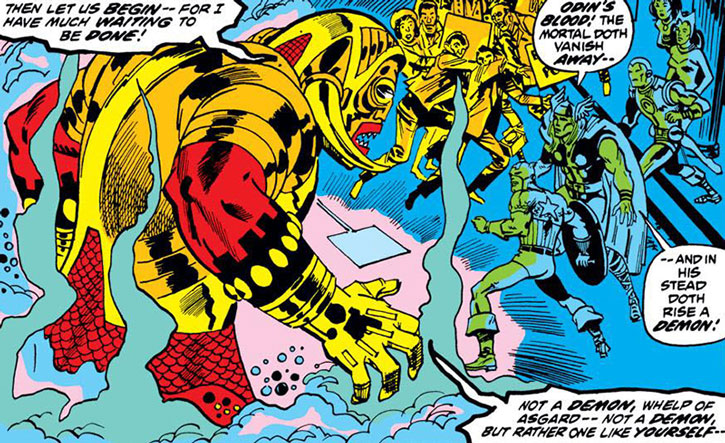 Or maybe it’s just a product of having been such a major and feared divinity for centuries.

There were indications that the “human form” of the Lion God was less powerful. But this one cannot tell from the story what this means or how this works.

Decades later, secondary sources established that they are Sekhmet of the Ennead.

Though Wakanda lies well South of Egypt, in the Great Lakes region, the gods of ancient Egypt (aka the Ennead, aka the Gods of Heliopolis) have long had a presence there. The main example is Bast, who localised their presence to become the Panther God. Their cult has been the dominant religion of Wakanda for at least a century.

(In Wakandan mythology, Bast and Sekhmet help the worthy reach an afterlife, described as a “green veld where you can run forever”. How this reconciles with the Lion God in the Avengers story being a foe of the Panther is unrevealed. Perhaps the myth is wrong, perhaps they work together but hate each other otherwise, etc. etc.).

While Bast thus diversified their portfolio and implantation, Sekhmet apparently remained focused on ancient Egypt. For centuries they were a major divinity there as the lion goddess.

For a long, long while Sekhmet the huntress/warrior was the patron divinity of the Pharaohs. Many major rituals to appease the angry, bloodthirsty lion were conducted throughout Upper Egypt.

(Our colleagues over at Marvunapp.com  also suggested a connection or identity between Amra the Lion, a divinity of Conan’s time, and Sekhmet).

However, Sekhmet eventually lost the ability to easily manifest on Earth. Perhaps the placating rituals were successful after all. As Egypt evolved and entered the Greek-dominated era, the lion cult dwindled into historical obscurity.

Sekhmet developed a rivalry with their sibling Bast. The Lion God would appear to their worshippers whenever properly summoned, while the Cat God remained aloof and in the shadows.

Yet, while both cults disappeared from Egypt, Bast developed an entrenched power base in Wakanda. They even overcame seemingly more local deities, such as the Gorilla God.

As to Sekhmet, they were left with very little.

In 1973, an unspecified African group wearing traditional garb organised a religious, magical ritual. Based on subsequent events, it is possible that these folks were Wakandans opposing the Panther cult.

A journalist only known as Mr. Umbala — possibly an American — was invited to the ceremony. He was told that a god just like Thor of the Avengers would be summoned to Earth.

However, the cultists unexpectedly killed Umbala. This sacrifice was necessary to the ceremony – so the Lion God could possess the body of the journalist and manifest on Earth.

As Umbala, the Lion God came to New York City. He sought to confront the Black Panther (T’Challa) and learn the secret of Bast’s continued success.

The Panther was then an Avenger. To approach, the Lion God used their mind control powers to assemble a rowdy, armed crowd of African-Americans. They demonstrated in front of Avenger’s Mansion making nonsensical claims about the Panther’s role in the US and Africa.

When the Panther came to meet them the Lion God took mental control of him. They teleported away with the Panther, leaving both the freed protesters and the Avengers puzzled and frustrated. 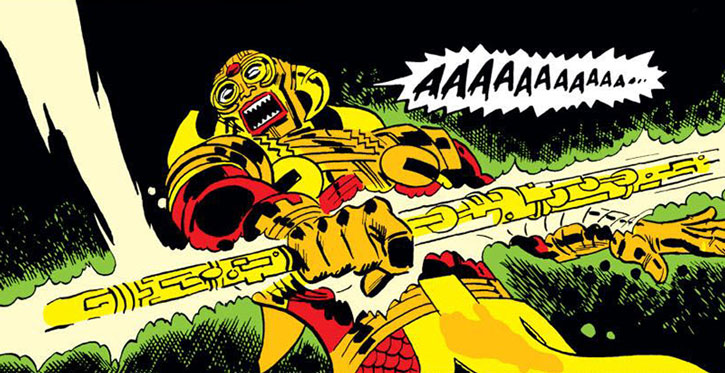 The egotistical and bloodthirsty Lion God came back with the captive Panther. Their goal was to kill the Avengers in front of T’Challa to break his spirit and facilitate interrogation.

Sekhmet’s body was seemingly disintegrated in the explosion.

The preternaturally sensitive Mantis sensed an evil presence in the Mansion. This was the Lion God, who was still haunting the place.

Mantis decided to summon the presence using her limited mystical skills, so as to trap it. However, the Avengers were wary of her and her companion the Swordsman. Thus, the couple launched their plan without warning the rest.

The Lion God was successfully summoned. Apparently they still could use Mr. Umbala’s body though it had seemed destroyed.

However, once the Lion God was standing in a certain spot, Mantis and the Swordsman insisted on celebrating the victory.

The Swordsman waved his flashing blade in intricate patterns and Mantis performed a similarly mesmerising dance, leaving the Lion God transfixed until Iron Man (Anthony Stark) revived and trapped the immobile Sekhmet in an Adamantium  cylinder.

Iron Man then implied that Thor would blast the cylinder and its prisoner into another dimension to get rid of the Lion God. This presumably took place, as the Lion God has not been seen since.

The narcissistic Lion God is full of rage and power. And pride, which makes sense for a lion. That was a joke.

They demand fear, respect, power and the glory of battle and do not seem to be any sort of deep thinker.

The Lion God is misogynistic, which is curious for an entity that was chiefly known as a goddess during their heydays.

“Behold their faces, Black Panther — engrave each visage indelibly upon your memory — for this is the last moment you will see the Avengers alive !”

“And next, a woman leaps to battle — but such a contest is not the way of the Lion Lord ! In preference, I let my savage jungle beasts engage the female, while I face warriors !” (orders his lions to attack)

Advantages
Insta Change (limited to the form of the person sacrificed to host him), Language (Wakandan and presumably others such as Hausa, Ancient Egyptian, Egyptian Arabic, etc.), Lightning Reflexes.

Drawbacks:
Attack Vulnerability (-3CS OV/RV against hypnotic movement patterns), Misc.: Cannot manifest on Earth without possessing a ritually “sacrificed” human. This is a Personality Transfer Ritual, except it allows the Lion God to use their full powers once they ride a human.

There isn’t much material, so the game stats are speculative. 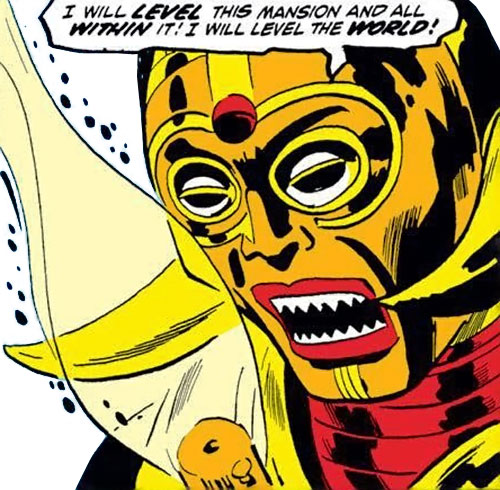 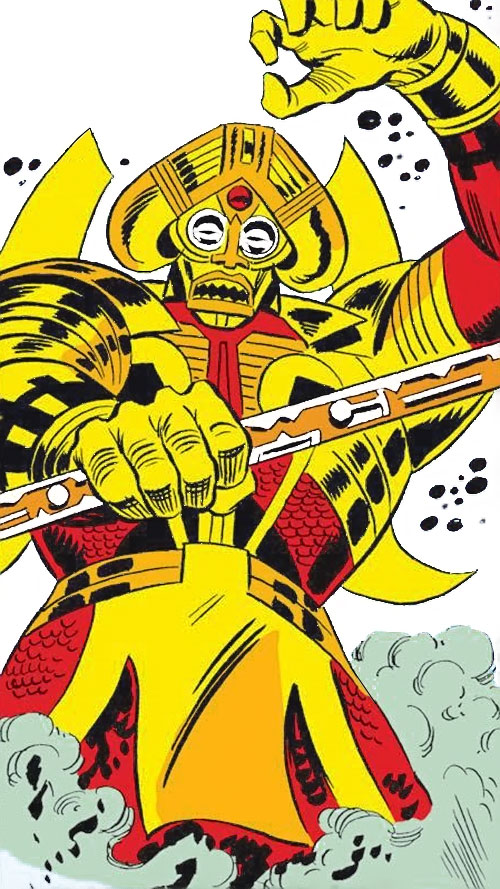 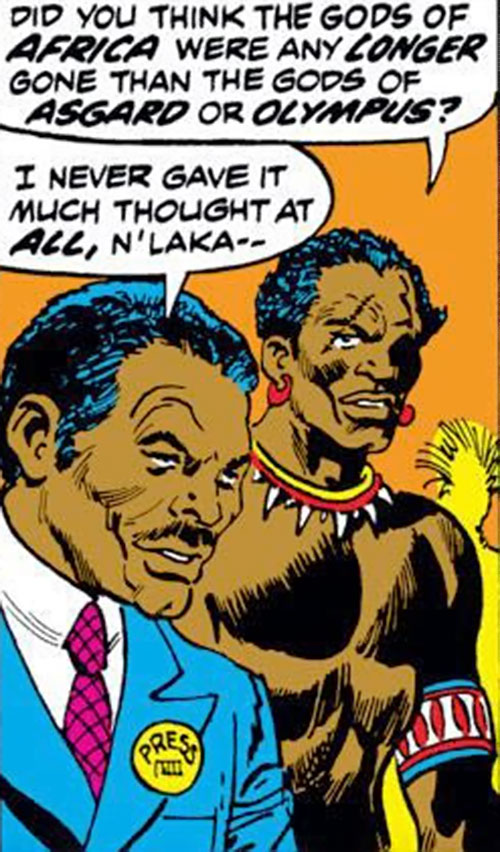