Alejandro Cortez was a teacher. He also knew about taming big cats and aerialist skills, so one assumes that he also attended some sort of circus school.

He seemed to be resourceful and superiorly intelligent. His significant technological skills (which might be his academic speciality) produced an amazing invention.

Cortez’s big breakthrough was his “partial thought transferal” technology. It allows a “teacher” to download some of their knowledge and skills into the mind of a “student”.

Apparently, what is being transferred can be selected. Howbeit, this involves extensive calibrating work both on the “teacher” and “student” end of the machine. The knowledge is apparently retained for but a few days, but refreshing the treatment seems easy.

Presumably, the settings for a given body of knowledge between a given teacher and a given student can be memorised by the machine.

Cortez’s Lionfang identity is a result of being “taught” by his pet felines, using his machine. He draws from their ferocity, strength and agility to become a much better athlete and fighter while the “teaching&lrdquo is active.

Lionfang may also have had other feline abilities, such as night vision. His stealth abilities were not demonstrated on-panel, but are implied by his hiding in Madison Square Garden.

Lionfang used to wear some sort electricity-manipulating glove. It would seem that it was derived from his special technology, crudely used to siphon off the vitality of a target. In game terms, though, it worked just like a lightning attack.

Cortez also packed a energy handgun that seemed to work along the same principles.

Cortez has a pride of big cats from the circus – one lion, one lioness, two panthers, one leopard and one tiger. He uses his technology to “teach” them, greatly enhancing their abilities.

While the “teaching” is active, the cats are trilingual. That is they can growl in, and understand, English and Spanish in addition to their normal modes of communication. However, they have but a rudimentary vocabulary. Furthermore, they can fight and act with a combination of predatory instincts and human reasoning. 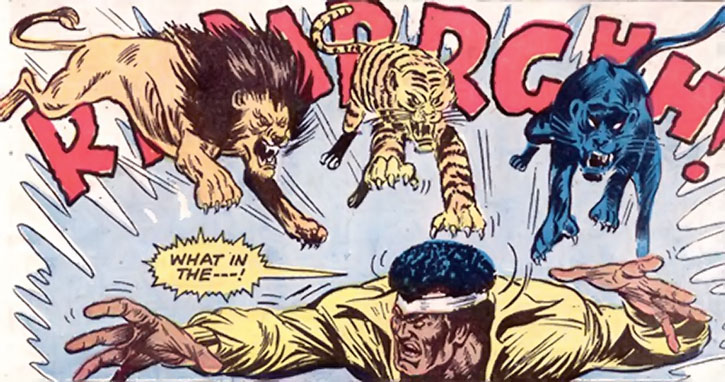 Thus, they are capable of very effective teamwork, they could claw and bite Cage without hurting themselves, they attack with increased acumen… Generally they’re much more efficient fighters than a wild animal.

They’re also quite tough. For instance, they could quickly recover from being thrown into a wall by Cage. Though Cage presumably wasn’t using his full strength.

In their enhanced state, the cats also more cunning than many humans. When surprised by men with guns at night, one of Lionfang’s tigers immediately… switched off the light from a table lamp to deny visibility.

Lionfang taught his cats how to dip their claws into poison (presumably a sticky resin) when fighting superhuman opponents. Even tiny lacerations are enough for the poison to act – since, presumably, the cats’ claws couldn’t really penetrate Cage’s skin.

One imagines that Lionfang also taught them how to get their claws washed after a fight, rather than following their instincts and lick their paws clean.

Return of the lions

During his 2010 return Cortez was an affluent man. He had accumulated a lot of money as a criminal lieutenant and enforcer. He lived in a run-down warehouse. However, the interior of the spacious building was actually luxurious and manor-like.

The decoration was on the tacky and ostensible side, with a leopard skin motif. Howbeit, the presence of actual big cats made it look less vulgar than it should.

Having lost the use of his legs, Cortez had specialised equipment such as a remote control panel on his wheelchair for his house’s systems, a specially-modified van with a remote-controlled ramp and no foot controls, etc..

One gets the impression that his spine was crippled and he couldn’t really move his torso. His arms, neck, head could move without discomfort but the rest seemed mostly paralysed, though he could lean forward to an extent.

His technology had also been refined to become a sort of large monaural headset. This presumably amplified cybernetics implants in his brain to communicate with his big cats, who had similar implants. The cats essentially acted as feline ninja enforcers, generally staying out of sight but ready to pounce and kill upon receiving a telepathic order.

Lionfang didn’t even bother carrying a gun and just operated in his wheelchair. His feline bodyguards could take on any opposition he was likely to encounter, even if these men were well-armed.

Mr. Cortez’s great passion was the circus. However, he turned toward a closely related field — education — to make a living. As a teacher for the City of New York, he somehow found the time to conduct technological research into pedagogy.

He made his big breakthrough in the early 1970s. It was a machine that could copy knowledge from “teacher” to “student”. Though the infusion of knowledge was but temporary, his technology worked fine.

However, the New York City schools system went through yet another round of budget cut. As a result, an accountant had to slash the budget for Cortez’s research. Apparently not being psychologically stable, Cortez decided to slash back. He ran away from his apartment and his wife, and became Lionfang.

As such, he hid in Madison Square Garden, where a big circus was currently in residence. Approaching the great cats, he worked with them using his taming skills and technology. He “taught”; them near-human intelligence and being “taught” ferocity and agility in return.

He also made a costume for himself, and sent out his tiger to murder the accountant.

The NYPD was puzzled by the behaviour of the feline killer, who acted with obvious intelligence. Thus, they suspected superhuman involvement. As a result, the Mayor’s office hired Luke Cage to determine what was going on. Though he wasn’t happy at the thought of working for politicians, Cage needed the bread.

Cage pieced together what had been happening. Lionfang sent a feline hit squad after him, attacking Cage in the street in broad daylight. Cage fought the beasts off and survived the poison on their claws.

Right after recovering, he discovered the truth and headed for Madison Square Garden. There he confronted Lionfang and his feline friends, forcing Lionfang to flee using his feline agility and circus aerialist skills.

Cage pursued by smashing the poles holding the trapezes, hoping to cut Lionfang off. Due to his wounds and exhaustion he miscalculated, and Lionfang fell to his apparent death.

Unbeknownst to Cage Cortez survived, though he permanently lost the use of his legs.

The jury gave him but three years for the murder of the accountant. They felt that nearly dying and losing his legs was already a considerable punishment. 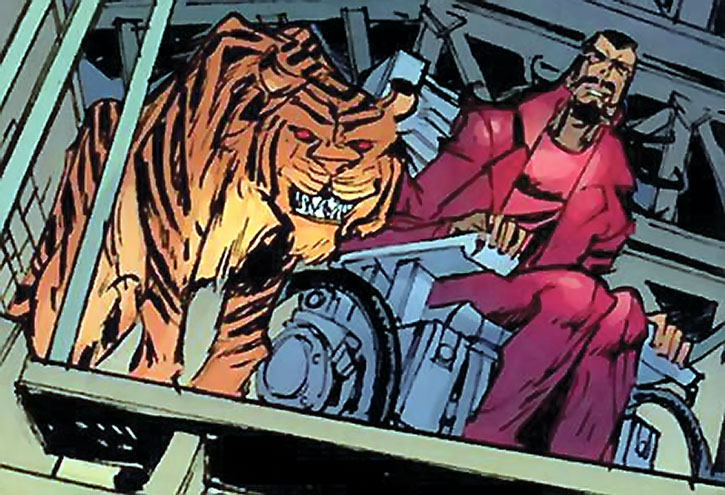 Decades later, a Scourge of the Underworld reported to the Red Skull that he had killed Lionfang, the Black Abbot and the Wrench. Whether this “Lionfang” was Cortez is unknown. If so he escaped death for a second time.

In 2010, Luke Cage ran into Lionfang again. He had long since moved to Philadelphia and had become a mob lieutenant and enforcer there. Cortez worked for a local businessman deeply involved in the heroin trade.

He was now called Alexander Comillo, and did not seem to use his Lionfang name. Cage invaded his warehouse. Cortez told his cats to leave after a brief scuffle made it clear that they couldn’t hurt the hero.

Cage didn’t get information out of the determined enforcer, but took his cellphone. Analysing the numbers in the phone’s memory gave Cage enough information to force Cortez’s employer to surrender to the police. One imagines that Cortez had the time to leave Philadelphia before it was too late.

In 2010, the eyes of his cats were now glowing red. Lionfang would often wear clothing — say, a vest — with a big cat fur motif.

During his 1973 appearance there was little insight into Lionfang’s reasoning and he just acted like a generic super-villain. He spoke in the usual comic book mix of English and Spanish (rather than real Spanglish). Cortez seemed angry and bitter, though he fought intelligently.

His speech was elaborate. The ferocity taught by his cats didn’t dim his smarts in any way.

In 2010 he was even more clearly a well-educated and eloquent man. Any psychological problems he may have had early on seemed gone, as he was highly collected and in control. Cortez considered that narcotics was an industry like any other supplying demand. On the other hand, he insisted that he was an enforcer and did not deal horse himself.

Cortez was still bitter over how little consideration he had been given as an educator decades before. Living in somewhat tacky luxury and being feared and respected was his revenge for the low status and pay of teachers. He stopped using random Spanish words in his speech, presumably because Philly is not NYC.

“I gave my feline students some of my knowledge — in exchange for their ferocity and fearlessness ! That is why they speak — haltingly, in only rudimentary Spanish and English, it is true — but actions speak louder than words, señor — as you shall see when they play with you !” (the pride of cats attacks)

(2010) “And how will you scare that [information] out of me, Cage ? What can you threaten me with ? You’ve already broken my back. You’re the hero. You won’t torture a cripple. That sort of thing ? It’s bad for the image.”

Cortez used the second approach. It may have been a limitation of his technology at that time, or a product of the circumstances (since the only teachers he had handy were his lions and tigers, oh my).

As a side effect, when used on animals, the machine allows for the equivalent of Speak with Animals: 07. Given this feat one assumes that students and teachers connected to the machine can all communicate without any linguistic hindrance.

Cortez’s Alter-Ego exists as long as the ’teaching‘ is active. The HPs are shared between both forms – what he spends as Cortez is also spent as Lionfang, and vice versa, and ditto for gains.

As Lionfang he uses the following stats :

While the ’teaching‘ from Cortez is active, all his cats have the following stats, regardless of species.

Equipment:
CLAWS POISON [BODY 01, Poison touch: 08, Note : can be Combined with the Claws Power of the cat, but the Claws are not a Carrier (they don’t need to inflict RAPs for the Poison touch to be used].

Note:
The cats can, and will, perform Team Attacks.

When he reappeared in Philadelphia, the following changes were observed : 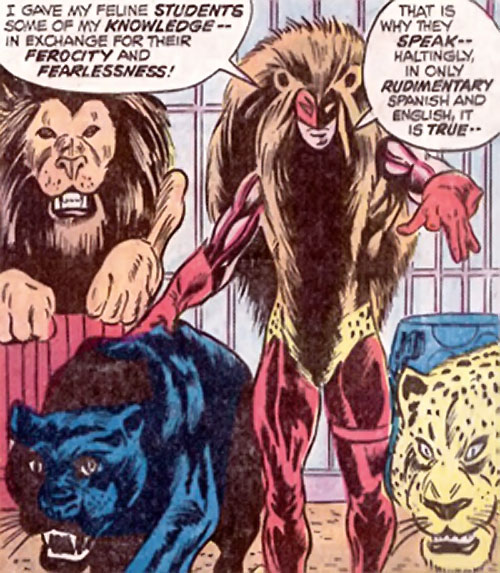 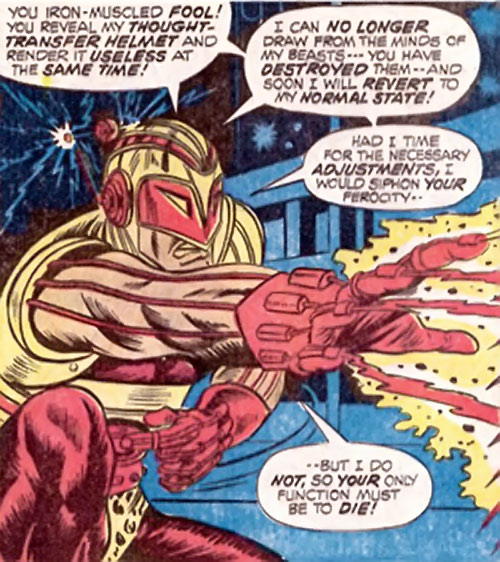 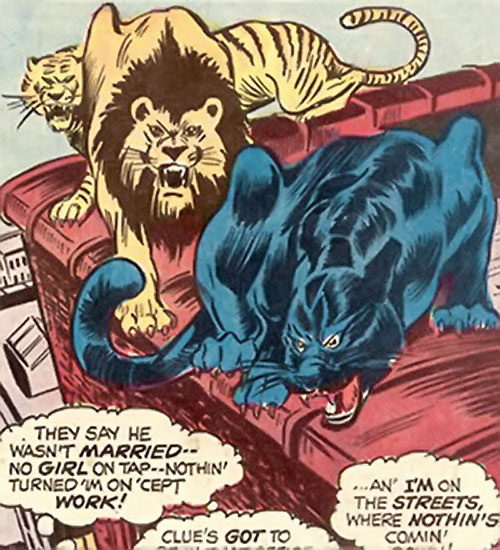 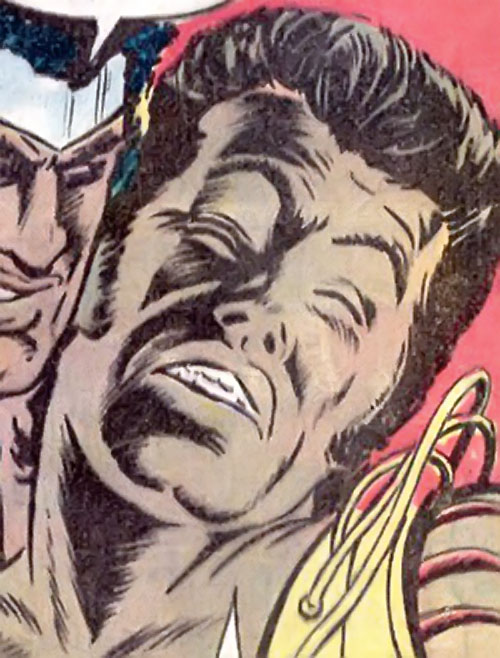 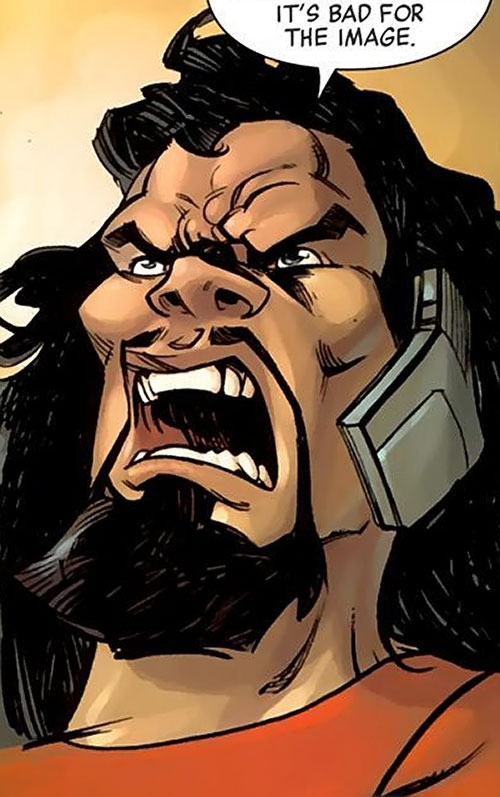 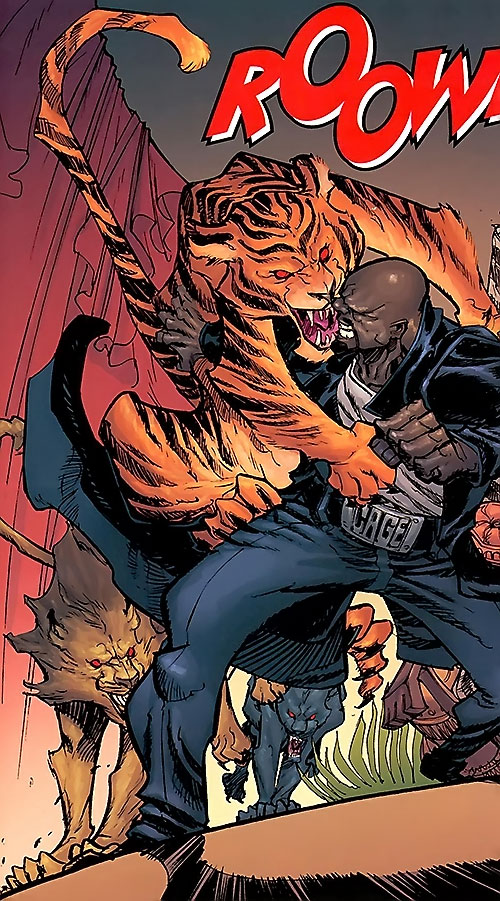