General Lo Chien is an influential PLA officer, as well as being secretly a mutant. As the masked Lionmane, not only is he a known superhuman, but he and many of his men also lead double lives as pirates. Yet there is a further level of deception, for the activities of those pirates often advance the interests of the PRC.

For instance, Lionmane and his modern day pirates once captured an important stone statue of the warrior Mulan  as it was conveyed by freighter. They had it sold at an auction in Madripoor. Switching to their PLA uniforms, they then stormed the auction to reclaim this piece of Chinese heritage (conveniently killing the organiser, who could have recognized Lionmane).

But again this wasn’t their ultimate goal. Their man inside the Heroes for Hire team observing the auction, Cat, arranged to have the statue explode during the fight. This was the actual goal – giving the PRC a casus belli  against the infestation that is Madripoor.

Lionmane later captured the Heroes for Hire and took them to his base. They escaped just as Wolverine, leading a small army of Madripoor rabble, stormed the base. Wolverine fought Lionmane, but did not fare very well. He had, at this point, been drained of his Adamantium  bone reinforcements. But Daniel Rand showed up and clobbered Lionmane from behind with the famed iron fist.

A subtle planner and smart, methodical leader and officer.

Although he appears to be a general who pretends to be a pirate who actually upholds his government, Lo Chien’s actual goal is personal power and wealth. He accumulates money and resources for when the Party will become weak, and opportunities to seize real power as a warlord will arise.

Lionmane is very confident, and is a cold-hearted and pragmatic killer.

“Take these four below. Guard them carefully. Do not take your eyes from them. Do not permit them to speak. They are dangerous but, perhaps, necessary to my plans. Kill all the other survivors.”

“The wealth I plunder [in Madripoor] will underwrite my efforts. Besides, this haven of cutthroats and criminals deserves to be destroyed.”

“Yes. Your claws cannot penetrate my skin, Wolverine — while I can grind your bones into paste.”

Sure. He probably would have been a Birds of Prey opponent, some time before the death of Ted Kord.

Bonuses and Limitations:
Skin armour also compensates for Sharpness. Attacks against which Skin armour applies do not get to apply as many APs of Sharpness as Lionmane has APs of Skin Armour (+1).

Lionmane’s men are treated like the shock troops in the Average Soldiers And Military Types writeup. They will be armed with pistols and/or submachineguns.

They have access to night vision gear and prefer to launch boarding actions at night. Their fleet includes an unseen ship, a high-tech and fairly large submarine, and various small outboards. 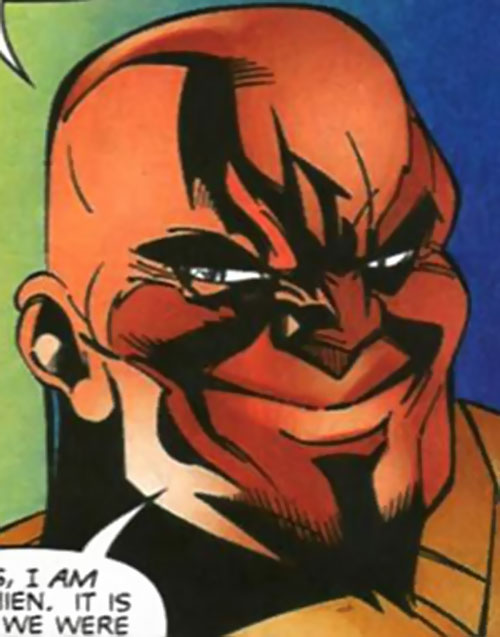