Live Wire is, in this then-new reality, the equivalent of core LSH member Lightning Lad.

Live Wire has the ability to generate electrical fields, which he can use to project lightning or disperse electrical shocks.

Garth Ranzz grew up on Winath, where almost everybody was born with a twin. Most Winathians find their twin to be their best friend. But Garth, whose twin was a sister rather than a brother, found himself looking up to his older brother Mekt instead.

Then the three siblings went out joyriding in their parents’ spaceship. They had to make an emergency landing on Korbal, and got blasted by lightning beasts only to wake up months later. Garth’s first concern was not for himself or his still-comatose sister, but for Mekt, who had woken up earlier and run away.

He ran off to look for Mekt, having heard terrible rumors about his activities. Not wishing to believe that his brother was willingly engaging in criminal activity, Garth concluded that the lightning powers were responsible for warping his mind. He thought they would do the same to him and his twin sister Ayla when they reached Mekt’s age.

His search for Mekt was temporarily derailed when, on the way to follow up a lead on Earth, he and two other youths saved the life of R.J. Brande. Brande convinced the three teenagers to form the Legion of Super-Heroes. They would act as a living embodiment of the newly-formed United Planets.

Garth, using the code-name Live Wire was happy to work alongside Imra Ardeen, the gorgeous Titanian he met on the shuttle flight to Earth. But his Legion career ended after only a few missions. His home planet, which considered him a runaway, sent Ayla to represent them instead of consenting to let Garth do it.

Disappointed by the turn of events but optimistic that he still might be able to find Mekt, Garth joined the Workforce, Leland McCauley’s corporate security team. He worked with them for a while. But he eventually became frustrated at McCauley’s shady business deals, micro management and lack of information about Mekt. Thus, he quit.

Garth was about to embark on his search when the White Triangle Daxamites attacked Earth. He was temporarily re-instated into the Legion to revive Imra and help defeat them. Despite Cosmic Boy’s wishes to the contrary, UP President Jeannie Chu insisted that he be once again removed from the team, and he left to finally search for Mekt in earnest.

When he found him, he received a nasty shock. Gone was the big brother he once idolized, replaced by a ruthless criminal who called himself Lightning Lord. Furthermore, Mekt was out to kill anyone or anything else with lightning powers so that he could be unique. This was a rebellion against his twin-centered upbringing on Winath.

Garth finally saw Mekt for the sociopath he was. With Ayla’s help, he defeated him – but lost his right arm in the battle.

Garth has since returned home and is recovering from his wound in the presence of his family, with which he has finally reunited. His lost arm has been replaced by a mechanical prosthesis. It is useful as an arm but is not able to project lightning like the rest of his body.

Shortly after these events, Cosmic Boy, who had begun having doubts about the president, secretly asked Garth to assemble a secret Legion rescue squad. It was to consist of himself, Valor, Andromeda, Ultra Boy and Jan Arrah. This squad would be called upon in case the president was, in fact, working against the Legion and the Legion became endangered due to this.

When the Legion fought the Fatal Five, the rescue squad, along with Legionnaire XS, recently returned from being lost in time, went into action. They saved the Legion from the villains. With President Chu no longer imposing restrictions on the Legion’s membership, Live Wire rejoined as a full member.

He still had problems, including the frailty of his artificial limb against his lightning-emitting body. But in the wake of the disappearance of seven Legionnaires, he has opted to keep his powers rather than give them up in exchange for a permanent new arm.

In recognition of his self-sacrificing nature and seniority, Live Wire was named acting Legion leader. This was a position he was uncomfortable with and happy to hand over to Invisible Kid once a formal election was held.

Once the other Legionnaires returned from the 20th century, Garth, at Ayla’s urging, began to actively develop his low-key love for Saturn Girl. When Ayla killed herself trying to regain her lightning powers, it was Garth who managed to restore her life and her lightning powers…at great risk to himself.

Garth has bright red hair and wears a blue and white costume with lightning bolts coming over his shoulders and across his chest.

Originally, Garth was the team’s resident hot-head. He acted without thinking and was a little reckless.

After his time searching for and confronting Mekt, Garth grew more mature. Of course, it didn’t help that he had his arm blown off by his brother.

Equipment:
CYBERNETIC ARM [BODY 04, Extra Limb: 03. Bonuses and Limitations : Replaces Live Wire’s missing arm; If Live Wire wishes to project Lightning from it, he makes an attack normally, then cross-references the Lightning’s EV against an RV of 4 (the Arm’s Body). RAPs are applied as damage to the arm]. 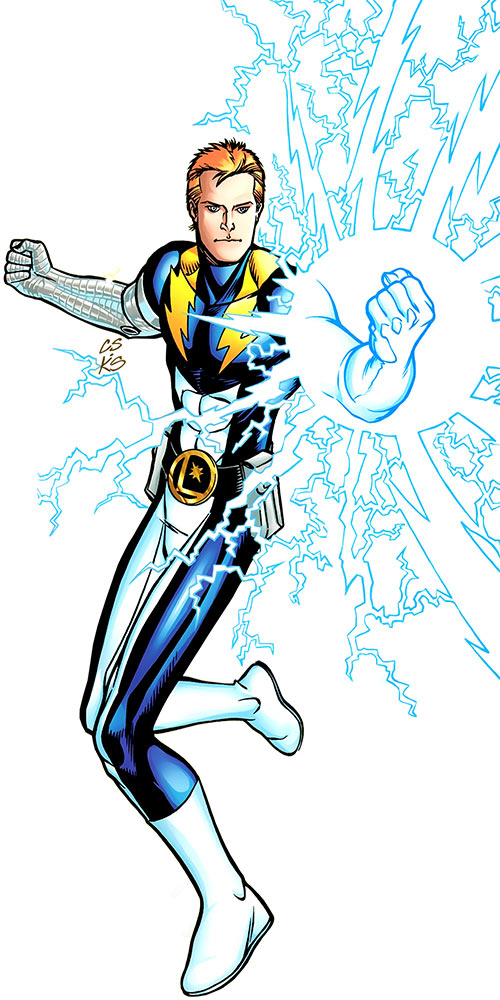