Here’s a plot summary of Tales to Astonish #49 (1963). This is the first issue in which Ant-Man becomes Giant Man. In fact, the cover proclaims “Beginning in this special super-issue: Ant-Man becomes “GIANT MAN””.

However, Giant Man and the Wasp are obviously in trouble. The Wasp proclaims “Giant-Man is actually being—ERASED!!” We see this ugly alien guy sweeping his arms across, causing sections of Giant-Man’s legs to disappear ! The caption pointing to the alien states “Featuring…the super-menace of ‘The Living Eraser !’” However, throughout the comic, he is referred to as the Eraser not The Living Eraser.

There are first a few fun pages in which Hank Pym experiments with his newfound growing power. He accidentally crashes through the walls of his house, and learns that if he grows too large, he becomes weak and can’t move. Fortunately, the bubble-headed Wasp is there to help.

Meanwhile, a guy who saw a giant crashing through Pym’s house reports it to the cops who reply, “So *you* saw a *giant*, huh ? Well, we’re followin’ up a report about a life-size *pixie* who’s runnin’ around *erasing* people !! The next nutty call will probably report a *gremlin* stealin’ City Hall !”

Anyway, the cops are on the Eraser’s trail. They seek him out in a local park. A hot dog vendor gets too close to the Eraser, so he erases him with a few swipes of his hands.

Later after the police give up their pursuit, he erases Professor Ebbhart, the renowned atomic genius. He tells himself that he has already erased another atomic expert, Dr. Lewis Stemm. And now the Eraser will erase Henry Pym, “the experimental wizard”.

Meanwhile, Henry Pym is showing Janet van Dyne how he has color-coded the size-change capsules. Suddenly, they are attacked by the Eraser who quickly erases Henry. He finds himself surrounded by aliens in Dimension “Z”. Soon, the Eraser arrives in the same manner as Dr. Pym.

The aliens tell Pym that they have been watching Earth for several centuries on their monitors. We can see them watching Native Americans and an atomic explosion on their monitors in the flashbacks. Only recently has humanity developed something that they need, namely atomic power. Therefore, they developed Dimension Travel via erasing.

The plan is to have the Earth scientists teach the scientists of Dimension “Z” how to harness atomic power.

Naturally, Pym tries to escape. One of the alien guards fires a gun which shoots “clinging bands” with the Snare power at Pym. But the Earthling escapes by shrinking, with help from the Wasp who was in his pocket when he was erased. They flee, but the aliens send a “hunter hound” after them, a weird orange dog with no nose (how does it smell ? Awful !)

Pym and van Dyne elude the hunter hound and escape into the ventilation shafts. When will aliens learn ?

They find where the Earth prisoners are being held, and dismantle a Scanning Device used to “keep tabs on their prisoners”. Pym explains that he’s here to help. He plans to find a way home, but until then, he tells them to stall.

Meanwhile, the aliens are searching for the escapees with “super-sensitive search-beam guns”. Of course, Pym and the Wasp are too small for the search-beams to pick up. Pym grows to giant size and easily overpowers a handful of aliens, when a huge ray narrowly misses him. The alien king is commanding one of his servants to fire some energy cannon at Pym who easily destroys it.

The aliens then send out the “Magno-Vises” after Giant-Man. These are like two halves of a handcuff, which fly towards his legs to imprison him. However, he jumps out of the way in time to avoid being caught.

Giant-Man then climbs up a building. Much like King Kong, he is soon attacked by a squadron of alien planes. The aliens can’t use destructive weapons, since if they were to miss, they’d hit the alien city. So instead, the ships fire lasso-like “cable snares” at him. Giant-Man grabs the snares and ties the planes to the building.

Then the Wasp shows up, having located the chief scientist of this dimension. They interrogate him, only to find that only one scientist knows how to escape this dimension. The Chief Scientist leads them to the main science lab, where they can see some alien scientists spying on Earth.

Suddenly, the scientist they seek arrives, and, taking Giant Man by surprise, causes “an unbreakable glass cage” to be dropped over him. Naturally, the only scientist who knows how to Dimension Travel is none other than the Eraser himself.

The Eraser states “*I* am the only one who knows how to travel between dimensions ! But that knowledge shall *never* be shared with another !… First I shall dispose of my weakling fellow scientist ! *This* is the price you pay for leading Giant-Man *here* !” So saying, he fires an energy pistol at the Chief Scientist, presumably killing him.

The Eraser then gloats. He tells Giant-Man how “only the one who wears this atomically-printed circuit on the palm of his hand can travel back to your dimension! It is the only one in existence, and none but *I* ever wear it !”

Suddenly, the Wasp shows up and causes the glass cage to be lifted. Giant Man grabs the Eraser and takes the palm circuit from him. At ant-size the two heroes escape to the prison, where Giant-Man (still ant-sized) erases the Earth captives, sending them home. He then erases the Wasp and himself. (“Here, I’ve learned to do two at a time !”)

The final panel shows the Wasp reading the paper the next day.
Paper: Nation wonders: ‘Who is Giant-Man ?’ Missing Scientists found !
Wasp: Y’know, dreamboat, there’s always *so* much to read in the papers when you’re around !
Pym: Now that Giant-Man has come into being, they’d better start printing more editions, my pretty little pest !

The rest of the issue is concerned with a back-up feature involving an evil alien monarch who wants to be famous, so he destroys an entire galaxy. However, this great accomplishment is seen by a young boy through a microscope as a flash of light. ”Whatever it was, it couldn’t have been anything important !”

The Eraser has green skin and wears a purple jumpsuit and matching shoes. He also has a goofy looking head-piece.

The Eraser would fit perfectly as a Silver Age  Atom foe, with Ray Palmer as the kidnapped scientist, instead of Hank Pym. 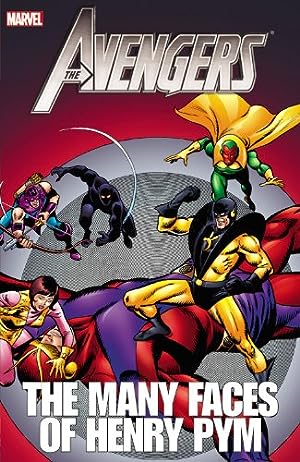 Avengers: The Many Faces of Henry Pym 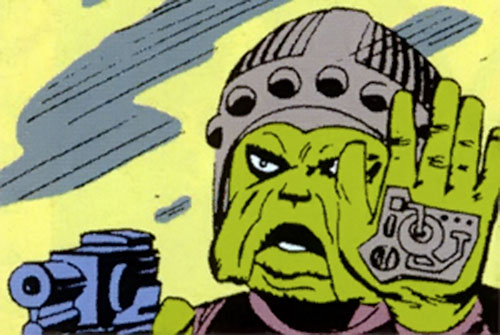 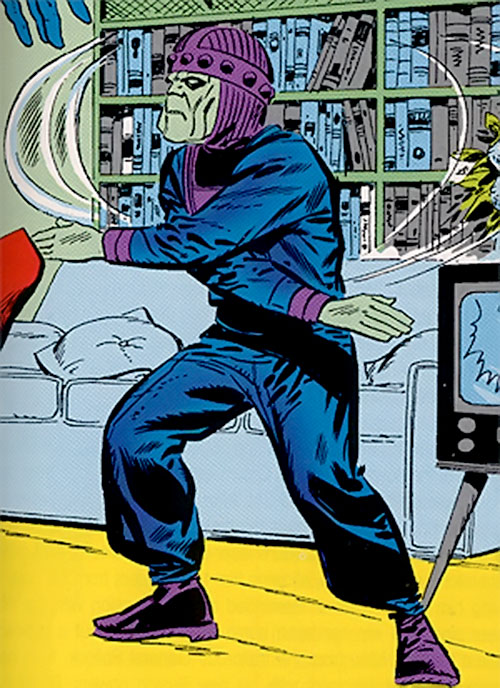