The Laser is a C-list enemy of the Avengers. This profile covers his Silver-ish Age  appearances – specifically 1966 to June, 1977. At this point he’s a handy generic baddie.

The costume in the main illustration is his earliest one.

Arthur Parks invented compact laser emitters that he can wear on his forearms and wrists, but are so powerful that they can cut cleanly through a bank vault door. The costume includes some sort of battery that can power the beams for extended periods. The projectors have at least four “modes” :

One panel shows the Laser using his wrist beams to propel himself in the air. But other panels show a sort of jet belt – or nothing at all. Flight was clearly demonstrated with the original costume. However the Laser did not fly when wearing the newer, tighter costumes – perhaps he couldn’t.

Though he’s no athlete, Parks is fairly strong. He’s also surprisingly good at avoiding incoming ranged attack. Even Hawkeye had some difficulty hitting him, though that was 1967 and Barton wasn’t as accurate as he would become.

The Living Laser wasn’t astoundingly precise with his beams. But given his firepower he forced most Avengers on the defensive to avoid getting hit, and he could one-shot most things they used as cover or shields against his rays.

In DC Heroes most opponents of the Laser would Lay Back – or outright Dodge if they lacked ranged attacks. This allows Parks to last longer in combat than you’d expect.

However, the Living Laser was a boss at hitting objects in flight, and at making precise long-ranged shots.

The first asset is presumably a result of his beams hitting instantaneously. This makes it relatively easy to shoot down even jet fighters as their linear trajectory is predictable on such short time scales (whereas a dodging person isn’t). He could also occasionally shoot down arrows.

As to the second, our game stats have to assume that there was some sort of scope on his laser emitters so he could consistently aim at targets situated about a mile away – though no such thing is seen on-panel. 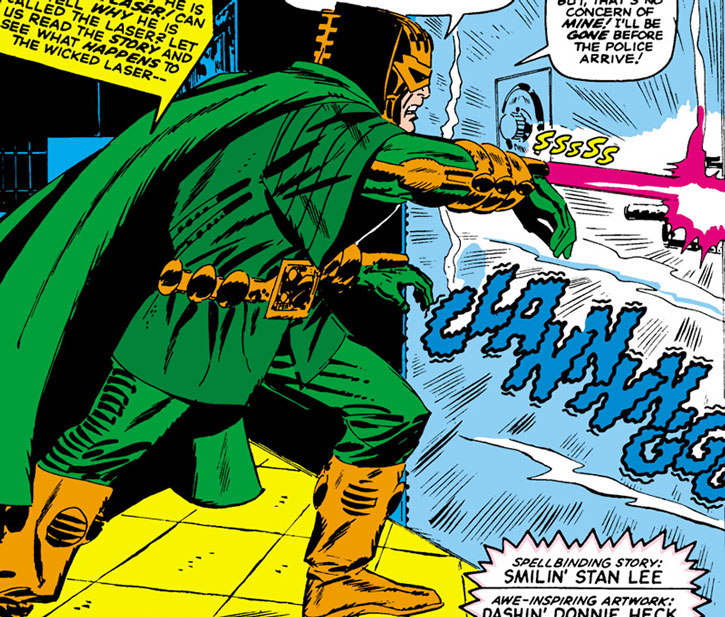 When working on his own the Laser prefers fly-by and sniping tactics, as he’s aware that he has no special defensive abilities. If he has to force a confrontation he’ll build deathtraps in some convenient abandoned building – preferably laser-powered deathtraps.

Generally he fights fairly smartly and employ sensible tactics, though his arrogance will probably lead to grievous mistakes.

Back in 1966, Arthur Parks was a research engineer working on laser projectors for military applications. When his fiancée Lucy Barton broke up with him he took it very badly, accusing her of venality (as her new future husband was a bank president) and feeling that his life was over.

He repurposed his research to become a super-villain and show off his power, attacking the bank of Lucy’s soon-to-be-husband;. Parks took the cash but threw back the bonds as the police arrived, to show off.

As the Avengers investigated the heist, Parks spotted the winsome Wasp (Janet van Dyne) and decided to conquer her. In his odd worldview that meant defeating her lover, the mighty Giant-Man (Henry Pym). Pym defeated him as Parks was too busy asserting his superiority. But the Living Laser escaped as he was being flown to prison.

Parks then launched various attacks against New York City to draw the Avengers into prepared traps – a laser cage for Captain America (Steve Rogers) and Hawkeye (Clint Barton), and a vacuum pump for the Wasp.

After capturing the Wasp, he agreed to support a revolution in Costa Verde for $10M (in 1966 dollars – that’s $71M in 2013 USD) and left for Latin America with his captive.

Parks routed the Costa Verdan armies by destroying their jets and tanks with long-range fire. The revolution was soon successful. When the Avengers came, Parks felled them using the huge laser cannon he had been building, plus the rebel militiamen.

His project was to destroy the captured male Avengers with his big cannon, as he assumed that this display of power would earn him the love of the winsome Wasp. Yeah, I know.

However, Pym escaped and booby-trapped the cannon, destroying it and knocking Parks out. The Avengers thus could restore a proper dictatorship in Costa Verde, and arrest Parks. Van Dyne suggested medical care for the Laser, as he was obviously psychologically ill.

Parks spent mere months in prison, as the Mandarin teleported components to his cell so he could assemble new wrist lasers. The Living Laser joined a team of lackeys and allies – the Enchantress, the Executioner, Power Man (Erik Josten) and the Swordsman (Jacques Duquesne) – to execute on the Mandarin’s grandiose plan.

He was sent to southern Africa to conduct a coup with the robotic Ultimo as his army, but was defeated by Hawkeye and Thor.

In 1968, Parks was recruited by Batroc to help steal the seismo-bomb. Batroc, the Laser and the Swordsman ran into Captain America in New York City – but Cap defeated both henchmen and convinced Batroc to let him disarm the bomb before it killed thousands.

Death and the elder

In 1970, the Grim Reaper (Eric Williams) recruited for his Lethal Legion 3 ex-minions of the Mandarin — the Living Laser, Power Man and the Swordsman — plus the Man-Ape (M’Baku).

The Reaper’s revenge scheme against the Avengers seemed to work. The Living Laser took out Quicksilver by blasting the concrete to erect an instant wall before his foe. However, it was a trap, and the Avengers soon got up and defeated the Legion.

In prison, Parks read a lot to pass the time, and devoured books about Lemuria . He thus learned about the Serpent Crown – the master artefact left on Earth by Set, of the Elder Gods who once ruled our planet. After he left prison the Laser couldn’t locate the Crown, and wrongly assumed that it had been destroyed.

Returning to science, Parks collaborated with the underworld scientist Dr. Jonah Harrow to implant his laser emission technology in his body, and become a superhuman.

While they worked, the Lunatic Legion sent an android patterned after the Living Laser to kill Rick Jones, but the wonderful Wasp accidentally destroyed it. For a time, it was hypothesised that the android was Parks, altered by the Legion – and that the Living Laser was thus dead.

The costume with the white arms and legs was his second costume, and was assigned to him by the Mandarin. It was soon customised to a similar design with some colour changes – the one with the green arms and legs.

Parks is a megalomaniac obsessing over his personal power. To him, how much firepower he wields is everything – and he assumes that everybody shares this reasoning. Thus, mighty demonstrations of power should in his opinion be sufficient to have others follow his orders, and to convince women to love him.

He seems completely immersed in this caricatural world where one’s worth is entirely tied to how big a cannon they have, men intrinsically cannot understand women, and people naturally fall in line behind those who wield a big cannon. It might be a weird way to compensate for depression after his fiancée’s departure.

The Laser isn’t as insane as he’ll later become, but spending time with him will make it clear that he’s off his rocker. 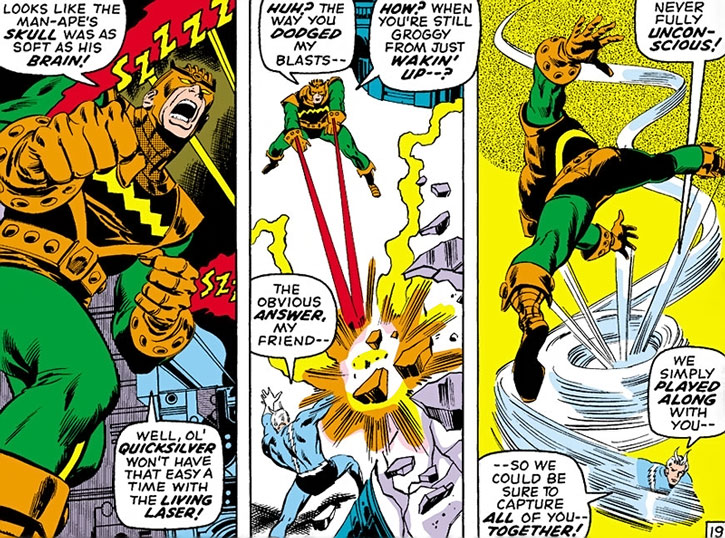 As a proper Stan Lee villain, the Living Laser talks big, and a lot. He’s also clearly overconfident, and his tendency to toy with his opponents was the cause of most of his defeats. Though he’s reluctant to work with teams since he wants to be the big man, he’ll swiftly change his mind if the reward is large enough.

Parks is good at nursing grudges, and will always be interested in striking back against those who defeated him in the past.

Though he was fixated on the wondrous Wasp early on, this obsession soon abated. Perhaps prison therapists made him realise he was just trying to get over Lucy Barton.

However, he remained bitter over her rejecting him. This meant that a plan that could allow him to enslave the winsome Wasp (such as using the Serpent Crown to control humanity) will gain his attention. It’s not a priority anymore, but it’s there.

“Hah ! No bank vault is safe from the power of the Living Laser ! My irresistible beam cuts thru the strongest steel like a hot knife thru butter !”

“I’m thru with research ! My discovery will be used to serve no one but myself !”

“The larger the beam, the more damage I can do with one stroke ! No simple banks or jewelry stores for me ! This time, the Living Laser is about to lay siege to an entire city !”

“Nothing shall ever separate the Living Laser from his beloved !”

“The ways of women are a mystery to me ! But, not so my newly-developed laser cannon !”

Instead of the Wasp, The Living Laser became fixated on Black Canary early in the history of the Justice League. He was working for S.T.A.R. Labs and used his inventions to take on the League several times over the years, including a brief stint working with Professor Ivo.

He encountered Green Lantern (Hal Jordan) and Green Arrow at least once during their time as partners. He came close to defeating them for the first time as the Guardians had reduced the power of Jordan’s ring. Only the arrival of Black Canary helped them escape his trap.

Later, he was transformed into a creature of sentient light when Lex Luthor tricked him into submitting to a process intended to drain his power and use it on Superman. He escaped, briefly worked with the Parasite as a way of keeping his uncontrollable power in check.

He then left to travel the universe as a beam of light when the Parasite was incarcerated.

Drawbacks:
SIA toward toying with his opponents.

For PL calculations I’ve used the Combat Blast in the Array, since the Laser Cutting Torch is normally used against obstacles such as bank vaults. The Powers aren’t counted in the PLs since they’re so specific. 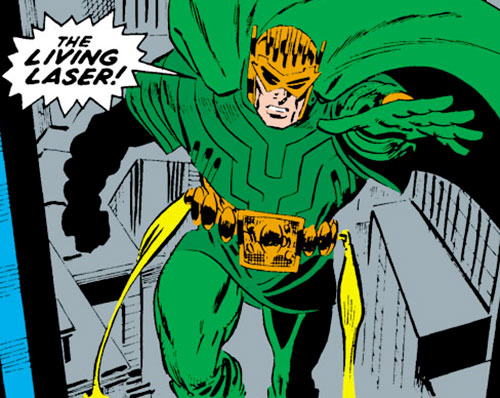 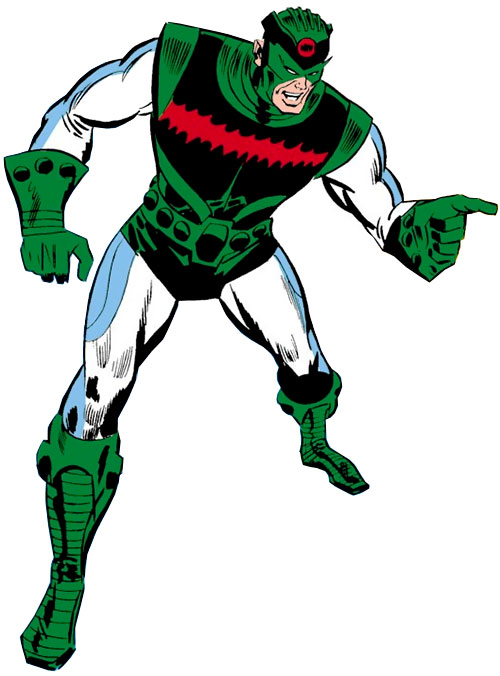 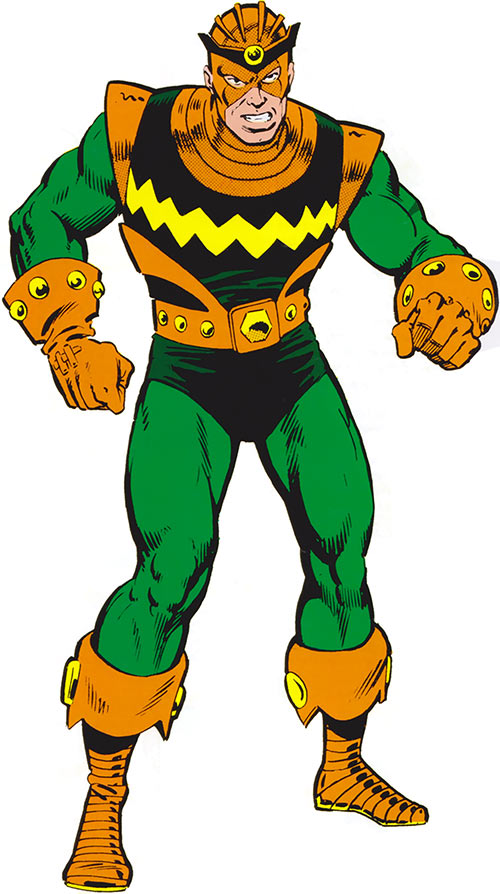 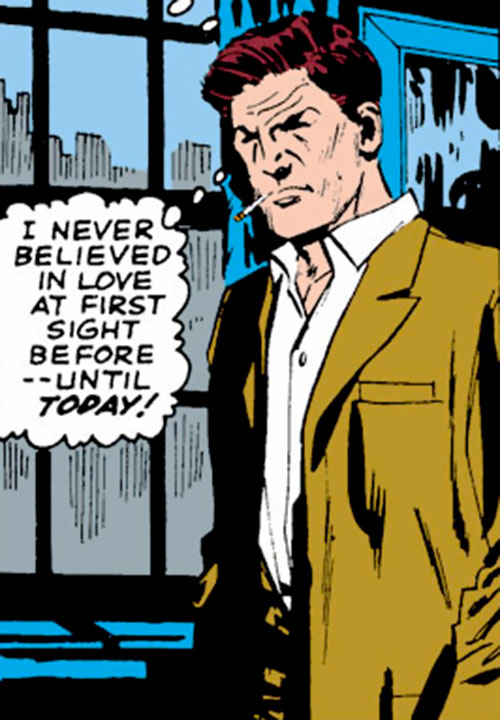