The living paint only appears in a 1946 Justice Society of America story (All-Star Comics #28), AFAIK.

There isn’t that much to say about it, but :

The living paint can provide anyone with artistic talent, inspiration and technique. Any schmoe with a least a vague idea of what they want to depict will paint a masterful, striking tableau.

As long as it stays in its sealed jars, the paint will remain vivid and ready to use even after thousands of years. Since the Justice Society didn’t try to neutralise it by literally watching the paint dry, that presumably remains true outside of the jars.

There is a security “device”. The first thing people will want to paint will be the face of a wise old European man, with a white beard. A portrait of this guy — presumably an Atlantean sage — features on the bottom of one of the jars.

This person will tell them of the paint’s origin and the risk it poses. And try to convince the finder not to do anything foolish.

The paintings can animate at night. The images will step out of the canvas, and carry out the wishes of their creator. But they must return to the painting before the dawn breaks.

Their exact abilities will depend on what’s depicted. Which also means that it presumably works better with realist paintings, though abstract paintings could be interesting to use in a story.

In all cases, the painted subjects are indestructible. They can be assaulted, wounded, stunned, etc. but they will simply get back up within seconds.

And before the Roger Rabbit fans ask no, turpentine didn’t work either.

The subject of my next œuvre…

The paint “agents” seen in the story were :

In so-so suits and hats. They had saps, .45 pistols, and one had a submachinegun. They talked like, well, 1920s Chicago gangsters.

In the painting they are driving a powerful, menacing automobile. That too emerged from the painting, but they soon had to abandon their car to enter a cave. 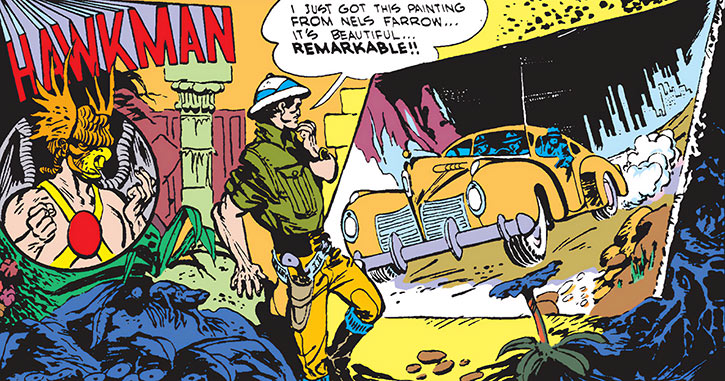 A strange mélange of… hunters maybe ?

The next painting isn’t seen, but it produced an odd array of characters.

None of these guys spoke.

A team of knights

Six guys in full plate armour (but no helm), wielding broadswords and shields.

They had Prince Valiant haircuts, and may have been English. 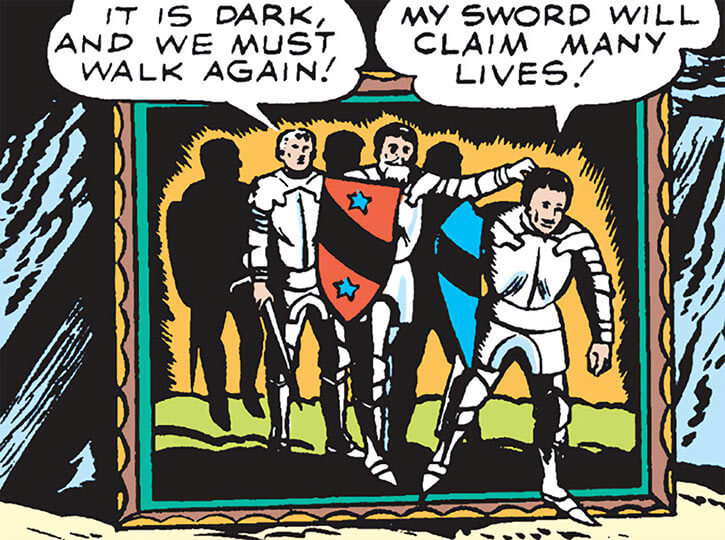 Yes, really. Four cowboys but with mermaid-like fish tails, riding giant sea horses. The latter had no problem moving on land – apparently they bounced on their tail like with a pogo stick.

These guys talked like a bad 1930s German Western dime novel, but with some terms being switched to a sea life theme.

They all had a period revolver, which they used as a cudgel once it was empty.

The Moors and the galley slaves

About seven guys with spears or scimitars. They seemed to be a mix of Northern African and Central African ne’er-do-wells.

The painting depicted them assembled near marble stairs around a big coffer of loot, so they may have been Barbary pirates. Barbary pirates were still a popular subject in 1940s US pop fiction.

Two cavemen with big clubs, what seemed to be a small mammoth, and a sabretooth tiger.

In the painting all four seem to be charging together toward the viewer.

In all cases, the painting’s subjects were able to give chase to Justice Society members. That worked even with preternaturally mobile ones, such as The Flash (Jay Garrick) or Green Lantern.

We don’t quite see it on-panel. But an OcccamA logic rule about favouring the explanation involving the fewest entities.-legal hypothesis is that they all can move tirelessly and at speed, even if no vehicle is part of the painting. And can locate their native canvas in real time and with perfect accuracy.

The living paint comes in a series of six hermetically sealed ceramic jars. They are a secret artefact from ancient Atlantis, and can be used for good or for evil.

In 1946, they were found on an unspecified archaeological dig by one Nels Farrow.

As often in Golden Age comics, Farrow was murderously bitter about his childhood friends, who had all become more successful than him.

Despite the warnings, he painted a tableau for each of his targets, then had it shipped to them. The paintings would animate at night and kill them.

When the dig’s boss fired Farrow for stealing the jars, he became another target.

However, Farrow was hit by a car right after he mailed the paintings. Dying in an intensive care unit, he asked to confess to the Justice Society of America.

Society members could thus rush to meet the victims, arriving not long after the painting had been received.

But in all cases night came and the paintings animated. These attacks could be stalled with enough force, but even Society members couldn’t truly stop them.

Each hero came up with the same idea. They all took the now-blank canvas and rushed back to the Society’s meeting place.

This forced the painted subjects to give chase, so they could return to their canvas before dawn.

They narrowly made it, entering the paintings that were now with the Justice Society. Society members then proceeded to scrape the paint off, and put it back into the jars.

They then sealed those back, chained the jars together, and hid them in a secure place. A warning message was added in a protective sheath.

The story opens and closes 10,000 years in the future, when the jars are found in the ancient ruins of “Nu Yuk”. Knowing of the great Justice Society of America, the men of the future heed the warning and leave the paints alone.

While it could be used to do good, the future blokes consider that they do not need this. The evils of the past have been vanquished, and humanity now has better tools at its disposal than ancient Atlantean magic.

I don’t think the Living Paint ever resurfaced. But it easily could have. Off the top of me head :

There also could easily be a tie with Marvunapp  -favourite obscure character, the Painter Of A Thousand Perils (Whilhelm van Vile)  .

The animations seem to have about DEX 02 STR 02 BODY 03, Weaponry: 03 and zero Hero Points. They presumably don’t have any Mentals or Mysticals.

They just aren’t that formidable. Ordinary people could fight them off for a good while, even though the paintings were of people who had actual training and experience in combat.

The thing is, they have Regeneration: 13 and Invulnerability: 15.

All the subjects acted as bloodthirsty, insegrevious killers. This presumably was based on Farrow’s murderous bitterness, and instructions.

Running: 08 (only when heading toward their canvas) and Detect (their canvas): 18 are possible.