Crossgen was one of the new super-hero comics publishers that emerged during the 1990s. But that was years after the big wave with Image, the Ultraverse, Dark Horse Heroes, etc..

Like all of her race, Liz can gain the abilities and memories of others by consuming a portion of their DNA. Every time she does that, her physical appearance alters to resemble aspects of her victims.

Saurians bodies produce a powerful venom. Liz would occasionally release some by cutting herself and smearing it on melee weapons. Her team mates did likewise with the excess venom that spilled from the wound.

She gained the ability to endure the harsh low temperatures and survive underwater from a Senkiem native she killed.

She can use the claws on her hands and feet with equal skill. 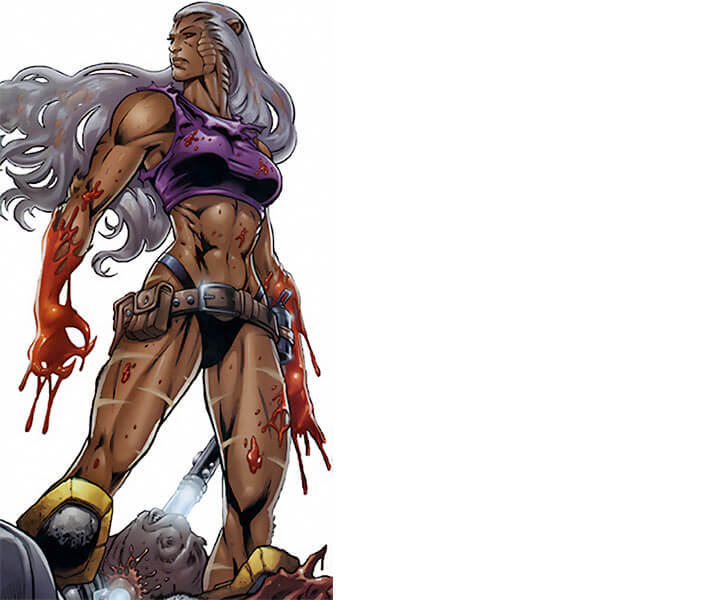 A scout in the Saurian military, Khlystek was abducted to another universe.

There she found herself stranded on a planet with 99 other individuals from her universe. Their cosmos of origin was called the Bright Universe but denizens of their new reality, called the Negation.

There were a number of more powerful prisoners than her. But most of their powers were affected heavily by the new universe’s strange energies.

By contrast, Liz’s more passive abilities and powerful physique made sure she didn’t get too low in the pecking order that evolved.

Why are we here?

One Kaine, relatively weak and labelled Pest for his irritating questions, convinced the others that they had been brought here for testing by hidden observers. As a result, the rest of the prisoners reluctantly tried following his lead.

This resulted in their captors bringing them into the prison proper. There they underwent further, intensive testing.

Recognizing Kaine as a fellow soldier, Liz quickly grew to trust his instincts. She fell easily into following his orders. Kaine again took the lead to break them out of the prison.

They seized a craft, but it lifted off before most of the prisoners were aboard.

Evinlea managed to take herself and a few others, including Liz, off planet in an air bubble. She did so just before the Negation destroyed the planet to try to stop their escape. And they were rescued just in time by a passing vessel. 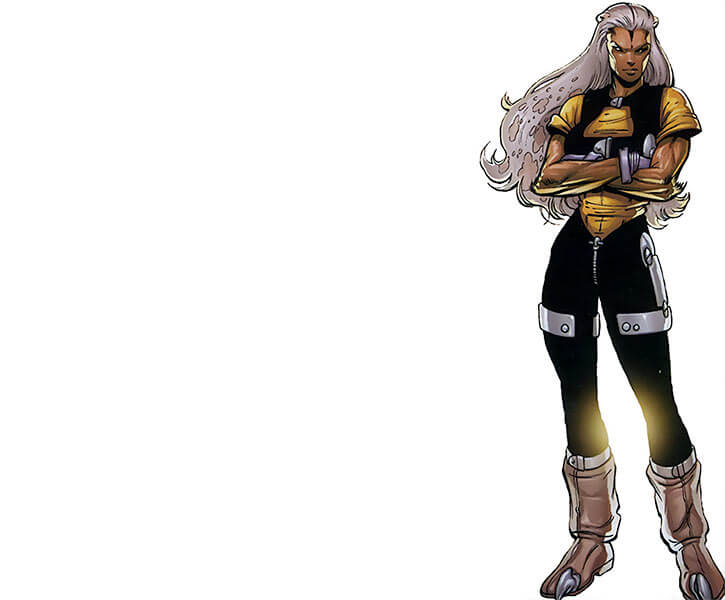 Fleeing Negation forces, they were shot down on the planet Senkiem, near a Negation substation. Liz acted as scout for the team, sneaking into the city and killing one of the guards.

Eating a portion of her prey (out of sight of her colleagues to try to keep her racial abilities secret) she found out enough about the layout of the place. She also gained some of the creature’s features, including gills.

Sneaking into the city to try and steal transportation, the group managed to escape. However, Fluxor’s crew were lost.

They stumbled across the other group of escapees on a lifeless planet. Hostilities ensued over the perceived abandonment back at the prison. This was cleared up as being due to the stolen ship’s automated systems.

But before they could decide on their next course of action, they were attacked by Lawbringer Qztr, one of the elite of the Negation. Qztr slew Javi, the Sigil-bearer whose power protected Evinlea’s powers from the negative effects of the Negation Universe.

Qztr was distracted from killing them when he discovered baby Memi to be completely immune to his attacks. He abducted her and took her to the Negation god, Charon.

However, they soon found allies when the Battle Group came under attack from the Australians. Also recently abducted from the “Bright” universe, they had gained enormous power in the transit. They were dedicated to freeing the Atlantean, Gammid, from the clutches of the Emperor Charon.

Kaine’s group allied themselves with the Australians. They used the shell of the destroyed flagship of the Battle Group to slip through the warp gates and charge the Negation homeworld. There, they rescued both Memi and Gammid.

In the fray, the Australians were killed and Kaine went missing for a short while. Thus, the escapees fled the homeworld.

When they heard from Kaine soon after, they had to stop at a nearby planet to try and acquire some tech to get to him faster than their ship would currently travel. Without that, they’d be unlikely to get to him in time.

Liz and Westin were sent out to find the technology, despite her objections that she’d work better alone.

After digesting some local knowledge, Liz noticed that Westin had taken off without her. She easily tracked him down. Liz grudgingly let him get away without injury after he revealed he made a deal to buy the necessary equipment from underworld types.

But they didn’t actually have anything to trade with. Therefore Liz had to sneak into the meeting place and dispatch the criminals, allowing them to get away with the goods. Westin confronted Liz about her method of gathering intelligence, which most of the escapees suspected anyway. But he agreed to keep it secret if she did likewise about his food cache.

They rescued Kaine. He convinced them to try and help free the resistance leader, held in a secure prison facility. The mission cost Matua his life, further embittering some of the escapees against Kaine. 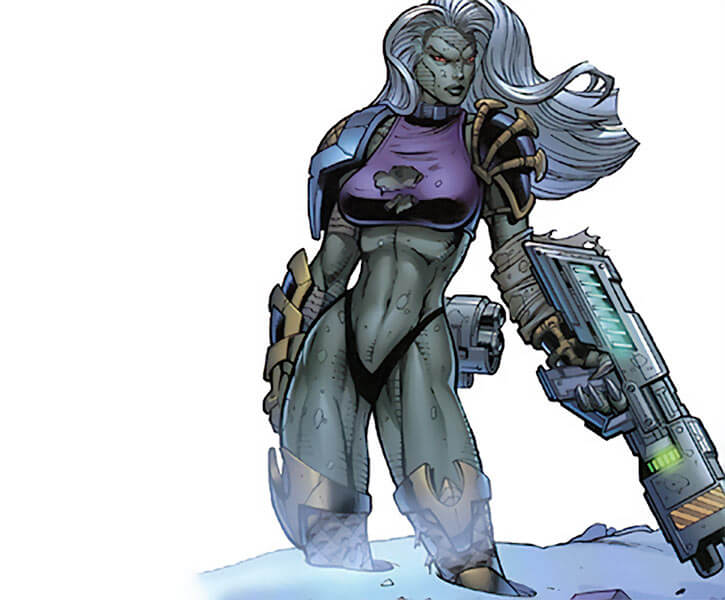 While re-supplying on a remote planet, they were attacked by agents of Charon, led by a former escapee, Javi. During the battle, Liz bit Tibian, absorbing some of his agility.

This fight cost the lives of Javi and Gammid. It also left most of the escapees tired of their flight, and of Kaine leading them on an apparently impossible crusade against the Negation.

Most of the escapees decided to find a quiet planet where they could try and make lives for themselves. That left only Evinlea, Lizard Lady, Zaida and Memi with Kaine. Evinlea left immediately after, declaring she was going to make an alliance with Charon. Their betrothal was announced soon thereafter.

Having time to think, Kaine decided to investigate Memi’s invulnerability. Liz consumed one of Zaida’s hairs, and learned the hidden word that combined Zaida and Memi into Zamida.

Zamida was an avatar of the being known as Danik. Danik had been making preparations to oppose the Negation invasion. That included influencing the creation of the Sigils. He wanted an (unknowing) agent in the Negation universe.

Zamida took them to Appolyon, who transported them back to the bright universe. But at this point, Charon announced to his people that the invasion was about to commence.

Back in the bright universe, Zamida led them to a gathering of Sigil-bearers by Danik.

(Outlined by Bedard at www.geocities.com/negationspace/interview2.html (defunct)).

Back in the Bright Universe, Kaine and Lizard Lady recruit the Saurians to battle the Negation forces. Liz hooks up with Tchlusarud, also called “Loser”. 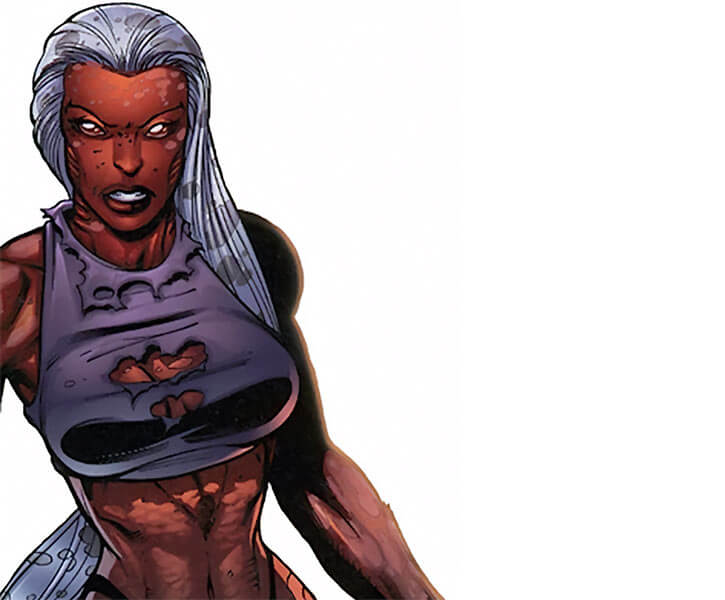 Quiet and disciplined, Khlystek’s aggressive tendencies are held firmly in check by her training.

She generally stays in the background when decisions are being made, but is most likely to side with Kaine, the only other soldier in the group. Like him she’s focused on getting home rather than just finding somewhere safe to survive.

She has little hesitation in entering killing combat, and really doesn’t like being called “Liz”.

“Do not engage me in idle chatter.”

[After Tibian slices her gut] “You… you gave me stomach ache… gave me an appetite, too.” [Bites his throat out]

“I am a warrior, from a race of warriors. To hide and grow fat does not entice me in the least.”

When a group of Durlans contracted the Yorggian Fever and seemingly lost their ability to change shape, they were ostracized by the rest of their race. They were exiled for the good of all.

Finding a new planet, they established their own society. After a number of generations they discovered they could still alter their shape slightly, but only by consuming a portion of the creatures they wished to duplicate. Such changes were semi-permanent.

The origin of their species is a secret now known only by their leaders, but they all have an animosity towards Durlans.

You Are What You Eat

Saurians have the ability to absorb the abilities and memories of others by consuming their DNA, even just a small amount. They then adapt them, their own physiology changing fairly quickly as abilities are encoded into their DNA (or simply remember them for learned abilities).

They attempt to Mimic all the target’s viable Powers and Skills. These are then retained until newer genetic material pushes out the older abilities.

In game terms, this is when they reach the maximum number of Mimicked Powers, 10 in this case. They are forced to discard the oldest Mimicked Power first.

Abilities that she’s Mimicked, in order, are: 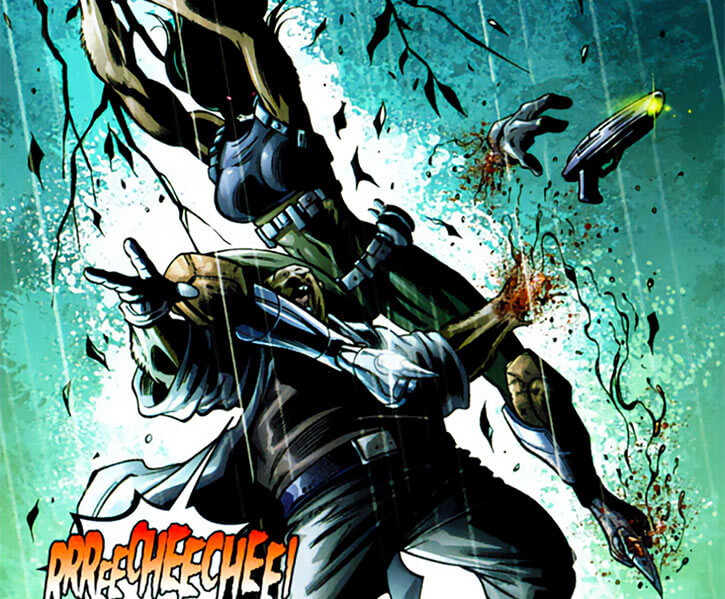 Saurians have the ability to absorb the abilities and memories of others by consuming their DNA, even just a small amount. They then adapt them, their own physiology changing fairly quickly as abilities are encoded into their DNA (or simply remember them for learned abilities).

They attempt to mimic all the target’s viable powers, natural advantages, and skills. These are then retained until newer genetic material pushes out the older abilities.

In game terms, this is when they reach the maximum amount of points available in Variable. They are forced to discard the oldest traits first.

Abilities that she’s Mimicked, in order, are: