The Lizard possesses all the abilities of a small lizard… in superhuman proportions. Its strength exceeds that of Spider-Man, and its physical endurance and toughness have few equals when it comes to Spider-Man’s classic enemies. Its hide is tough enough to withstand fire from automatic weapons or beatings at superhuman strengths.

Its speed is incredible and its acrobatic prowess, including climbing and leaping abilities, is just amazing.

Its strong reptilian senses are capable of mentally controlling lesser reptiles and seeing in the dark. Its prehensile tail is a most powerful and effective weapon capable of beating thick doorways or opponents into pieces. In addition, it has long hard claws extending from its hands. 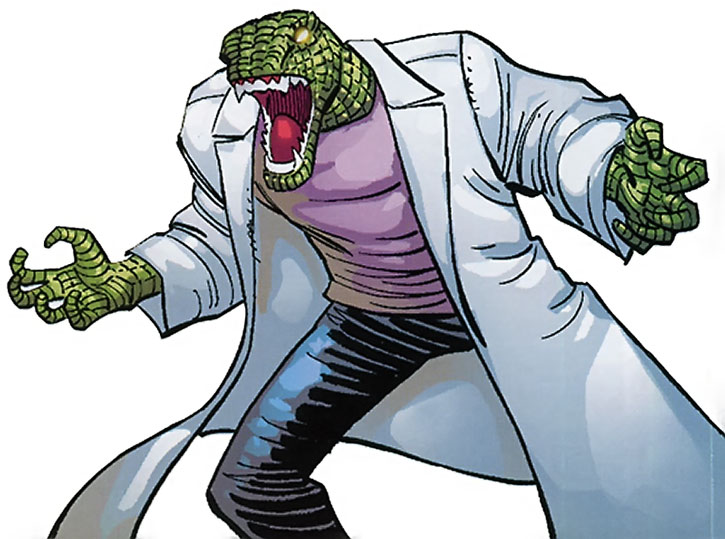 As any ordinary reptile, it has the ability to regenerate lost limbs and heals at an accelerated speed. In short, the Lizard physically is very powerful being capable of defeating the likes of Spider-Man in physical combat.

Dr. Curtis Connors is a genius and leading authority when it comes to the fields of herpetology  and general biology. He’s an expert in physics and electronics and is capable of building amazing energy devices or sensors. He’s a very intelligent and dedicated man with much scientific knowledge.

Dr. Curtis Connors was an Army surgeon whose right arm was amputated when it became gangrenous from a war wound. Unable to remain a surgeon, Connors undertook the scientific study of reptiles, soon becoming a leading authority. Reptiles still possess the ability to regenerate missing limbs whereas mammals have evolved away from that trait.

Connors discovered the precise biochemical substance that confers this ability, and administered it to himself. He succeeded in regenerating his missing arm. However, the mutagenic effects of the chemical did not end and caused a body wide transformation to a reptilian-humanoid form.

The reptilian form has thoughts and will separate from Connors’. Spider-Man heard about the Lizard, as Connors was now called, and traveled to Florida where the Lizard resided. 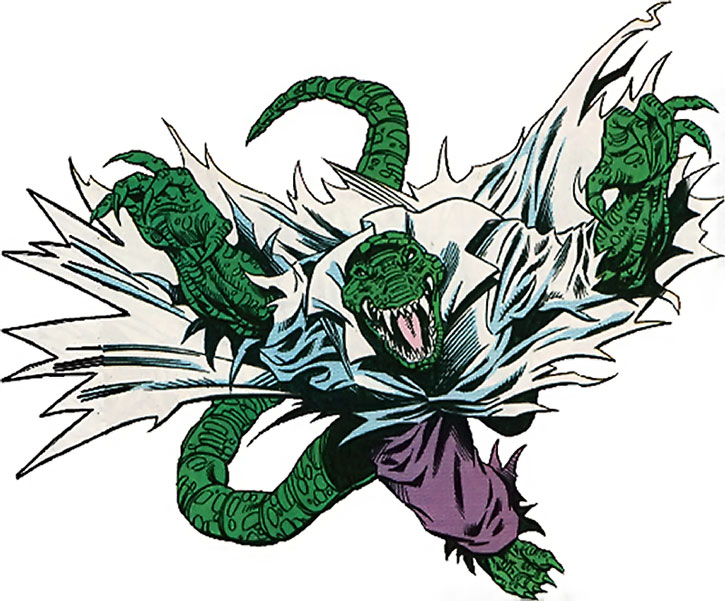 Spider-Man concocted a potion, using Connors old notes as help, to reverse the effects of the original chemical. Yet the genetic-level changes caused by the serum remained, and Connors periodically continues to revert to the Lizard. The transformation is most often triggered by certain chemical and electromagnetic stimuli.

Connors later moved to New York City with his family. He worked at the Empire State University where Peter Parker — alias Spider-Man — studied. Whenever the Lizard would resurface Spider-Man was soon there to stop him. Spider-Man and the Lizard have crossed paths many, many times over the years.

The Lizard has occasionally tried to take over the world by help of reptiles, but has been stopped by Spider-Man.

At least twice the Lizard has allied or fought the reptilian being called Stegron, but in the end both were stopped by Spider-Man. The Lizard is a well-known public menace and occasionally continues to plague mankind, and Spider-Man in particular.

The Lizard looks like a big, green, bipedal humanoid lizard. It’s skin is green and thick and clearly not human. It’s head look like that of a giant reptile with a long nose, a long tongue, small nostrils and big white eyes.

The Lizard is an interesting hybrid of animal and man. He is a former human being whose reptilian brain is in full control over him. As such, it’s aggressively cautious, primitive and predatorial. The Lizard is beyond human concepts of honor. He will not hunt former enemies for cause of revenge, but merely for survival.

It has occasionally had plans for conquering the entire earth for lizard-kind (probably to secure his ’race‘), but has since given up those plans for lesser things. 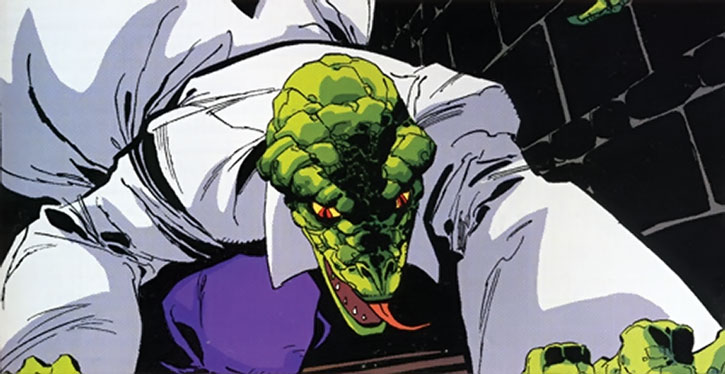 In contrast to its reptilian side, memories from its human existence torment it and hinders it in its’ plans. For example, it would never hurt Connors’ family since it remembers the love Connors bears for them. The Lizard doesn’t really hate Connors, but merely sees its’ lizard self as the most powerful of forms and best adapted for survival.

Being a reptile, the Lizard will fight to the death if sufficiently opposed.

Dr. Curtis Connors himself is a kind and quiet man dedicated to bettering mankind. He will help anyone in need of his expertise in herpetology or general biology. He will even voluntarily turn into the Lizard in order to physically help people.

Curtis fears the chaos of his lizard-form and will ordinarily try to avoid turning into the Lizard unless that’s really necessary. Connors has over the years become a close friend of Spider-Man and they’ve both helped each other several times and probably will continue to do so.

The Lizard and its adventures are closely tied to the Spider-Man. They would preferably be inserted, as is, in a campaign where Spider-Man exists. Using him in a strict DC Universe environment, his origins could be kept intact, but the foes be different.

He could be placed in DC’s New York, where there’s a notable lack of super beings. He would have fought Nightwing some years ago. The Blue Beetle is also a suitable action / scientist type of hero to be fitting.

Connors could still work at the NYC University, but could have periodically have worked for corporations such as Sunderland Corporation, who are doing research in many areas including reptiles. If that is the case, the Lizard could meet up with the likes of the Swamp Thing or even Constantine, meaning that the occult tie-in à la Calypso, could be repeated.

Bonuses and Limitations:
All animal powers work only on reptiles.

Note:
Some artists tend to draw the Lizard superhumanly large. In these cases, the Lizard has Growth: 01 (always on and already calculated into stats). 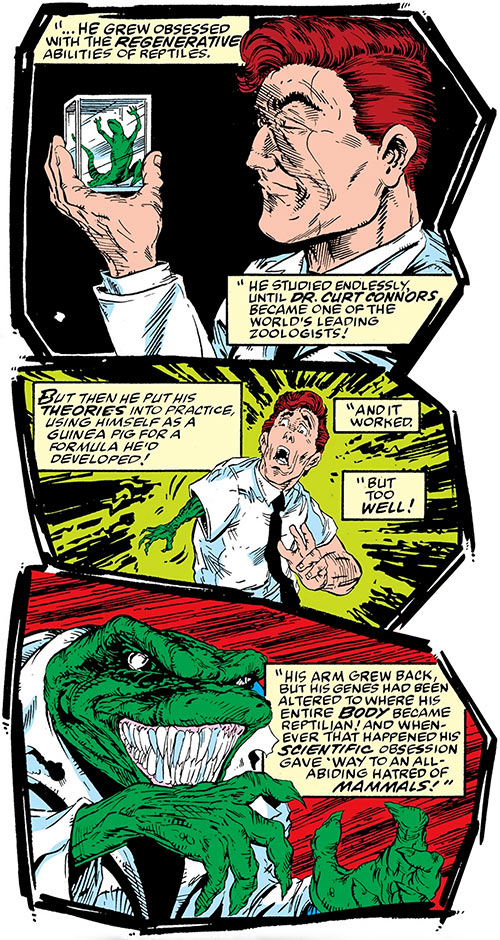 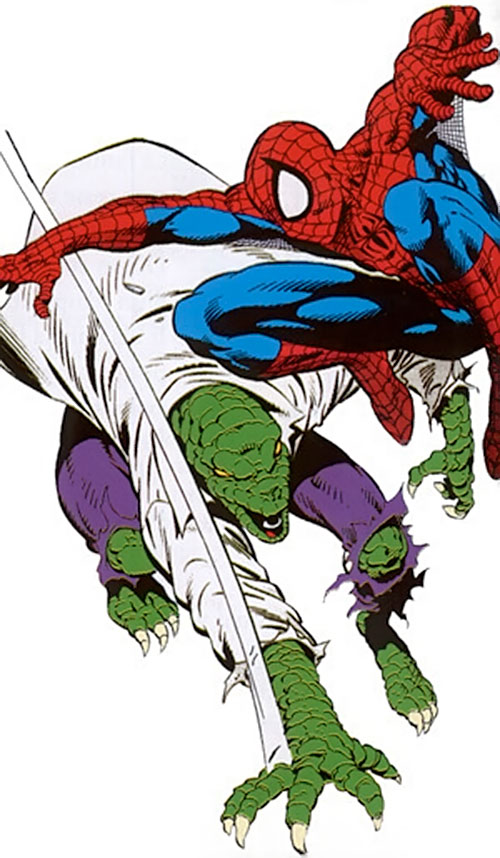 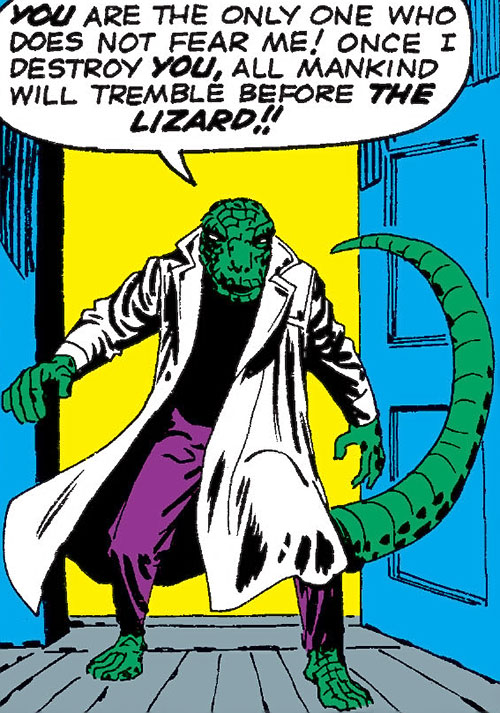 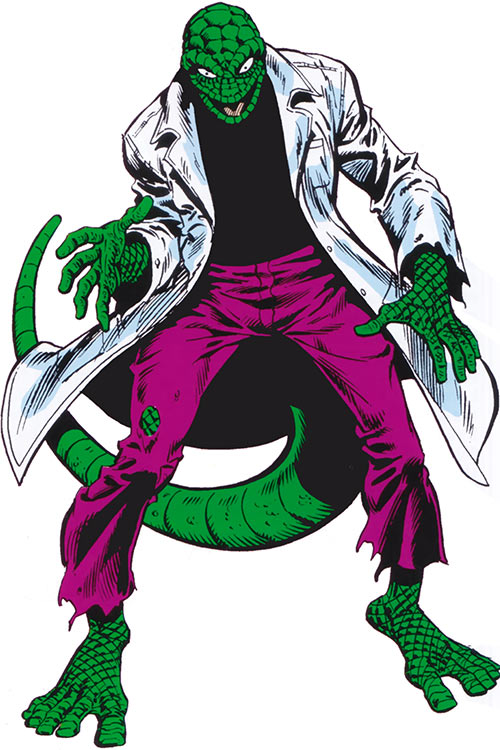 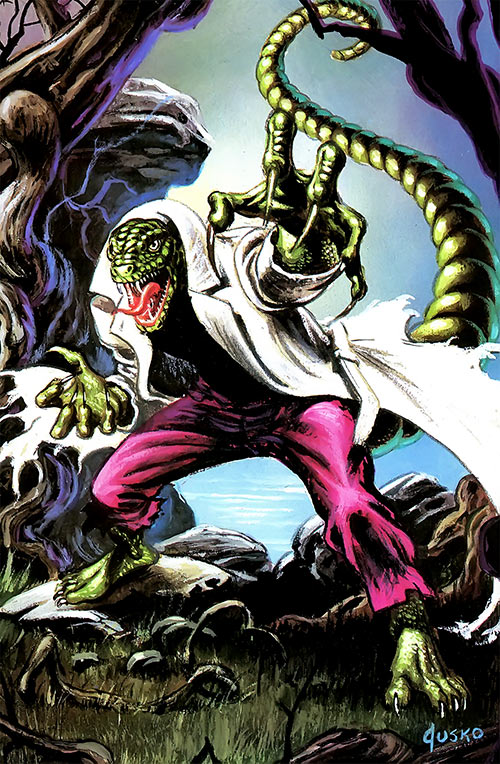