Lobe has been cybernetically and genetically augmented. That allows his body to accept implanted mutant powers derived from scans of the original owners. He’s difficult to harm, having had Wolverine’s regenerative abilities uploaded into him.

He allegedly has hyperprescience flashes of the future — although it’s unclear how useful they actually are — and is allegedly hyperintelligent – which is equally dubious.

He can use scans of know mutant targets held on the Sublime Corporation’s supercomputers to download strategies and counterstrategies for fighting them. He can also upload this data into his teammates’ virtual cortices.

An M.B.A. specialist, the man who would become Lobe had his life changed after hearing John Sublime speak. Joining the Sublime Corporation, he rose to become its CEO after John Sublime’s fall. Continuing its interest in harvesting mutant abilities, he turned it into more of a business than the movement it had been under John Sublime.

Subjecting himself to their procedures, he gained powers and took the name Lobe. Recruiting lieutenants to act as his bodyguards, he transformed them into :

Purchasing the remaining Predator X mutant hunters, Lobe had them infused with nanomachine probes. He then captured the former Marauder, Scalphunter. His captive was forced to pilot a plane filled with the Predators towards the mutant island of Utopia, claiming sanctuary.

The plane was shot down before it reached the island, but the Predators survived and made it to shore. Their deaths released the nanomachines to scan and analyse the mutants, sending plenty of data back.

This data was mied by the Sublime Corporation’s supercomputers to map the mutant genomes. That allowed them to duplicate more powers, to calculate their fighting styles, and to devise combat counters against them. The data about the powers also allowed Lobe to “upload” Wolverine’s healing factor  into his body.

The X-Men ultimately tracked them to their offices in New York. A team comprising of Wolverine, Psylocke, and Colossus stormed the place. Downloading their fighting styles, Lobe and his bodyguards held the X-Men off until the intrusion of Fantomex.

Fantomex neutralised the computers guiding their strategies, forcing Lobe to release the mutant-targeting HX-N1 virus. This gave Lobe and his team the opportunity to leave.

Using the data they’d gathered, the Sublime Corporation developed an inhaler spray. It could grant the powers of a certain mutant for a limited time. Finding five rich young volunteers who wanted to field test the technology, Lobe created his own X-Men.

Lobe released the HX-N1 virus to incapacitate most of the mutants on Utopia. Then he had his X-Men fill that vacuum, fighting crime on the streets of San Francisco. This created publicity for his new technology.

Contacting Cyclops, Lobe offered a cure – for a virus he of course denied creating. In exchange, he wanted them to sign over the exclusive commercial rights to the entire mutant genome. Cyclops refused, but Lobe was sure he’d reconsider.

Lobe introduced the inhaler to his shareholders at a party in San Francisco. But it was predictably interrupted by the X-Men team formed of those who’d avoided the virus.

They fought past his bodyguards with little trouble. Therefore, Lobe tossed inhalers to the crowd and got his shareholders to join the fight and test the goods. He even used one himself.

When more X-Men teleported in, still weakened by the virus, Lobe activated the virus’ ebola plus function. It took the X-Men down, threatening to kill them. But it also hit Lobe and his shareholders.The inhaler altered their genetics enough to make them susceptible to the virus.

Thus, Lobe had no choice but to neutralise the virus.

Cyclops and Angel promised to sue Lobe for everything he had for his illegal use of their genetic sequences, as well as having him arrested.

Lobe enjoys talking, and gloating, and being able to look down on others. He takes pride in his great intellect, despite not exhibiting much.

He enjoys having powers, and while he has no compunction about getting involved in fights, he’d rather watch others fight for him.

His primary goal is to make money from giving everyone mutant powers.

“Coffee’s for ladies, cotillions and 12-step meetings. You got anything stronger ? Actually I kinda know everything and you don’t. Poor us.”

“Ladies and gentlemen: I’ve just experienced a hyperprescience flash. That — combined with a call from the woman in reception reporting a giant metal man just threw a sculpture through our front door — has led me to believe an encounter with the X-Men is imminent.”

“I’m loading their vitals and fighting styles into your virtual cortexes now. Upgrade yourselves to Wolverine-class warriors and get ready to break their bloody necks.”

[To Wolverine] “How is it possible for one to be impaled upon your claws and not bleed a drop ? It’s your healing factor. And I stole it from you, thanks to our Predators. You see, Logan, my friends and I were made special, not born.”

“We didn’t make it this far to go out like regular chumps, you arrogant mutant monsters.”

Fantomex: “My god.”
Lobe: “One day, perhaps. For now, just a man with healthy aspirations.”

“I can read you like a cheap novel on an airplane, you faux-French fop.”

“We don’t hate you, Scott. We love you. We love you like we love the Maldives, the south of France and the sex shops of Thailand. You’re our favourite holiday destination. We’d love to visit.”

“I was a top-flight M.B.A. specialist when I heard John Sublime talk about The Third Species. It changed my life. Humans becoming mutants. And the U-Men who put that into practice. Brilliance. But, surgery ? All that nasty cutting ? And the religious stuff ? Ugggg-ly. There had to be a better way. Still, he was my inspiration. Alas, he isn’t around any more. Thankfully the Sublime Corporation is carrying on his good work. For profit.”

Having catalogued the genome and fighting style of almost all known mutants, the Sublime Corporation’s supercomputer can download strategies to fight them into cybernetic implants in Lobe’s mind.

This allows him to predict and avoid their attacks, and strike past their defences. That gives him Power Reserve (AV): 04 and Weakness Detection: 08 when fighting a scanned mutant (as long as the computer isn’t interfered with).

The Sublime Corporation used its studies of the mutant genome to produce short duration inhalers. These grant a person the powers of a particular mutant (Wolverine and Deadpool are apparently the most popular, even though Deadpool isn’t a mutant).

If the dosage is designed for the character’s own genome the effects can last for around a day, but the generic ones last for an hour. Due to duplicating mutant genomes for their powers, empowered individuals are susceptible to attacks targeted at mutants. They also presumably register as such on scans, such as the Sentinels’.

Someone using an inhaler has Adaptation: 10, limited to the individual mutant it’s based on, without need to see them in action or be near the target. They also have the Miscellaneous Drawback (Susceptible to attacks targeting the mutant genome).

The durations on the Inhalers are guesswork. They’re first used by Lobe’s X-Men, for whom it’s stated they’ve been specifically designed, and who need additional doses to maintain their powers. So it’s an assumption on my part that the durations differ, and they’re chosen arbitrarily. 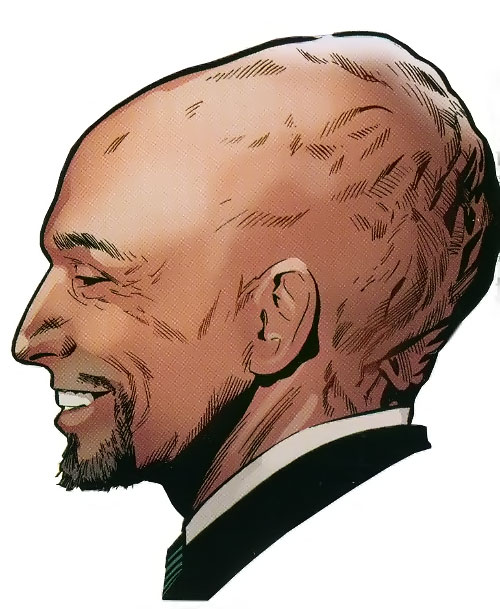 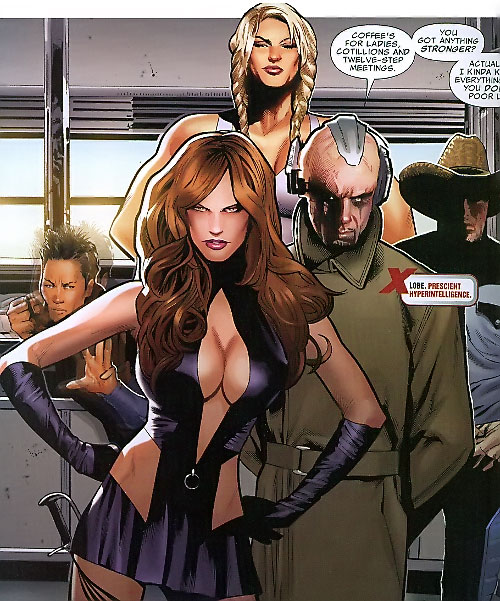 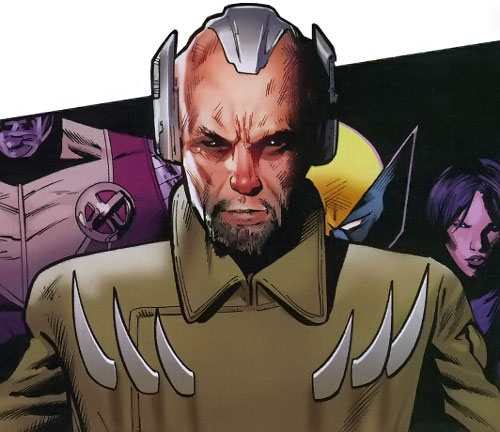 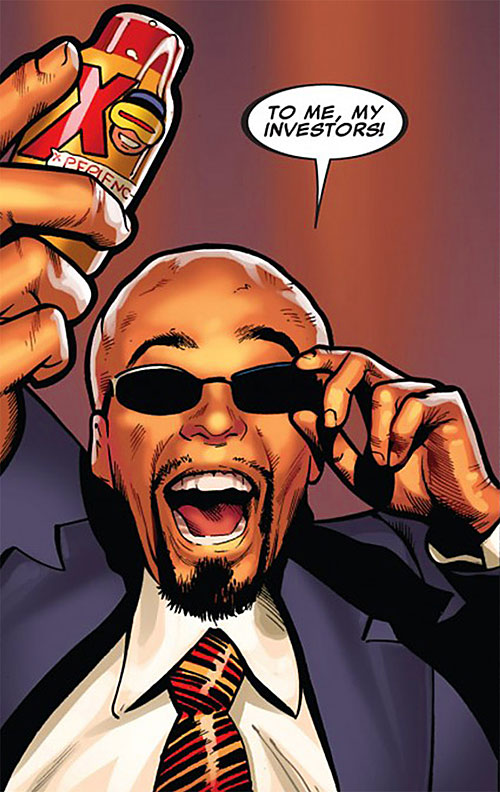