There are period, crude notes since we weren’t quite fans. However, it is likely that we will eventually revisit the material for Lobo as he appeared in Omega Men and (especially) L.E.G.I.O.N., which were good books.

Lobo is powerful enough to successfully take on Superman or Captain Marvel – his natural speed, ferocity, strength, toughness, etc. have almost no equal. He can also sense a person’s weaknesses (in this technical build, this is all modelled by his Power Reserve – he determines the “right” level of power to acquire through his second Detect). 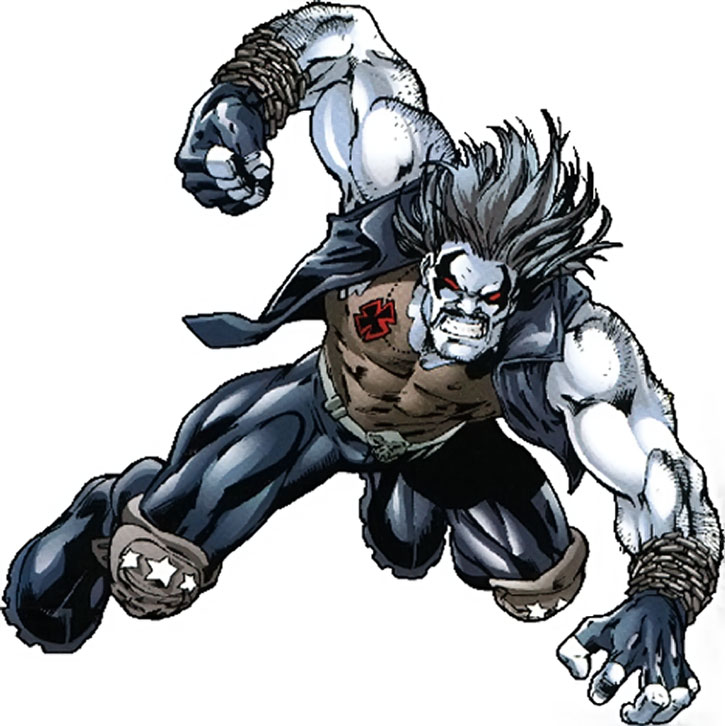 He’s as indestructible as you can get, and an astoundingly efficient brawler and street fighter. And weapon master. And drunkard.

Simply put, he’s a juggernaut of wanton destruction and ultra-violent rampage, who can probably beat up anything this side of Darkseid.

See the DC Who’s Who  entry.

Be also aware that Lobo smells.

He also has been more recently reverted to a teenager and enjoys it, but I want to ignore that.

Lobo is a big, bad biker on steroids. Less stupid than he looks, he enjoys nothing more than bloody violence, cheap booze and terrorizing the whole galaxy by just being around. He’s a walking powder keg ready to explode at any moment, for any lousy reason, just because he can – and because he really enjoys it.

With the rest of the L.E.G.I.O.N., he consider himself honor bound. But he certainly ain’t a good team mate, generally operating alone. Since most members of the core L.E.G.I.O.N. have enough guts to stand up to him, he grudgingly respect them. Besides, they provide him constant, paid for opportunities for mindless violence, given the nature of their missions. 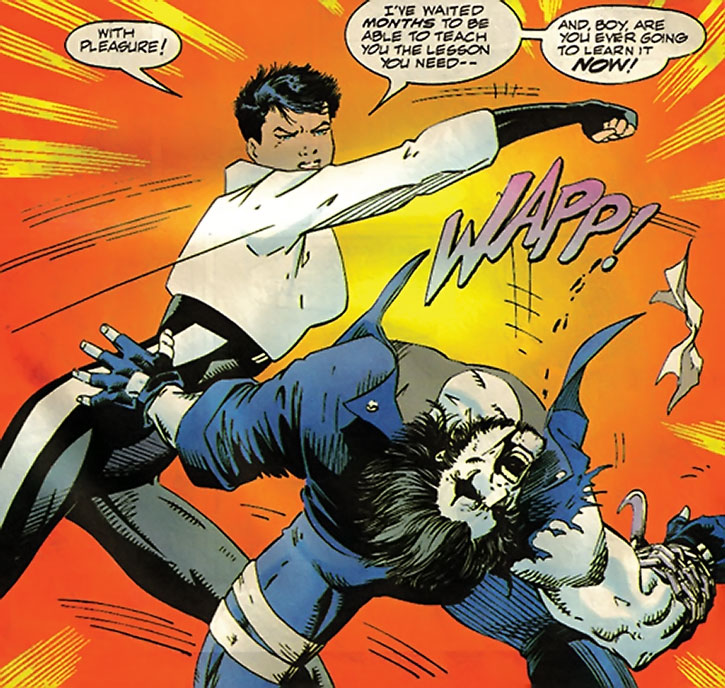 Lobo is in love with the idea of vendetta. He will go to ridiculous lengths to avenge himself of any perceived slight. He’s also in love with the concept of slumming. And torture. He’s the most ruthless, cruel, stubborn, and down-right despicable being in the known universe.

He’s an addict to physical violence, the more graphic the better. He hates “square-jawed, short-back an’ sides, goody-goody feebs” (which means pretty much every superhero), since… well, it’s a bit hazy, but he hates everyone anyway.

Get the picture, or do I need to go on ?

“Yer mine now, cheeseball ! Mutilation ! Degradation ! Defenestration —whatever the frag *that* is ! Start gougin’ out yer own eyes – cos’ if they’re still in yer head when I get here, I’m gonna… no, cancel that ! I’ll gouge them out myself ! I have other unspeakably hideous things to do to them first !” (etc., ad nauseam).

This is Lobo for his time in the L.E.G.I.O.N. – but also taking into account some of his previous and subsequent adventures. Note that this writeup takes an often-taken road – Superman has a DEX of 10, not 15 as in the official writeup. If you think Supes has a 15 DEX, you’ll need to add another Power Reserve for DEX to this writeup.

Due to his ruthless reputation as a fraggin bastich, Lobo gets a +1CS to all intimidation attempts on any one without Iron Nerves who’s heard about him (and most space faring races have heard of him). For persons whose WIL, MIN and SPI are all below 5, and has heard of his rep, Intimidation is not even a Dice action – the mere sight of Lobo counts as an Intimidation attempt.

In fact, he’s one of the most feared beings in existence.

Lobo’s code of honor is unclear. The most solid part is that he will always keep his formal word (once tricked into a wager that he would serve Vril Dox, he couldn’t walk out. His “code” included the fact that he could free himself through trial by combat, but of course Dox… well, read the issue), and he tends to “stay bought”.

Another important part is that he will *not* use his Power Reserve to give himself STR or BOD above his opponent’s (or above the BOD of an obstacle) – using his second Detect power to know what his opponent’s STR and BOD are. He will also always kill a double-crossing bastich, anybody who kills a fishie, etc. ad nauseam.

While Lobo will often claims that he never kills without a contract, this is hogwash. Likewise, at times he insists that he will make no unprovoked attack (and that his opponent has to hit him first before he declares combat), until that part of his code of honor bores him. Such optional parts of his code are not covered by his CIA.

Czarnian Invulnerability and Regeneration are such that they can regrow themselves from a single drop of blood. That means that if a Czarnian is cut up… you may within minutes have clones of his original, born from his blood and body parts.

This ridiculously potent ability would be equal to Split: 50, Only when RAPs have been inflicted in Killing combat with cutting weapons (-2), the Splits not having lowered stats.

Lobo was deprived of this ability by Dox (Dox may be a bastard, but he’s a responsible bastard). This incident also had him lose 4 APs in his Invulnerability and Regeneration powers, which were originally a 28 and a 08.

A High level Connection to the Street or Underworld (or a Low Connection to L.E.G.I.O.N. or Lobo himself – note that nobody has a High Connection with Lobo) is generally enough to locate Lobo. Hiring him usually requires a Wealth check against an OV/RV of 12. The more violent the job, the more likely he’s to accept it for less, or even for nothing.

If he feels that the job is a joke, he will kill the prospective employer. Ditto if he’s double crossed. Or not paid. Or disappointed by the job. Etc.

Whenever the hero’s name is spoken aloud an Intimidation check is made against anyone with a Villainous Motivation who happens to be within earshot. Standard Multi-Attack Penalties apply (or don’t..you’re the GM after all). A villainous character with this advantage has a similar effect on anyone with a Heroic Motivation.

Lobo’s space dolphins are his pride and joy. They fly in herds near his free-floating space hovel, which may be near the remains of Czarnia. The dolphins have adopted Lobo and seem to be the only intelligent creatures who can stand him, and will not run blinded with gut-wrenching fear. In return, he gives them a lot of crude, vulgar love.

Of course, if anyone harms his fishies, Lobo will immediately seek out the perpetrator and torture him to death. Painfully. 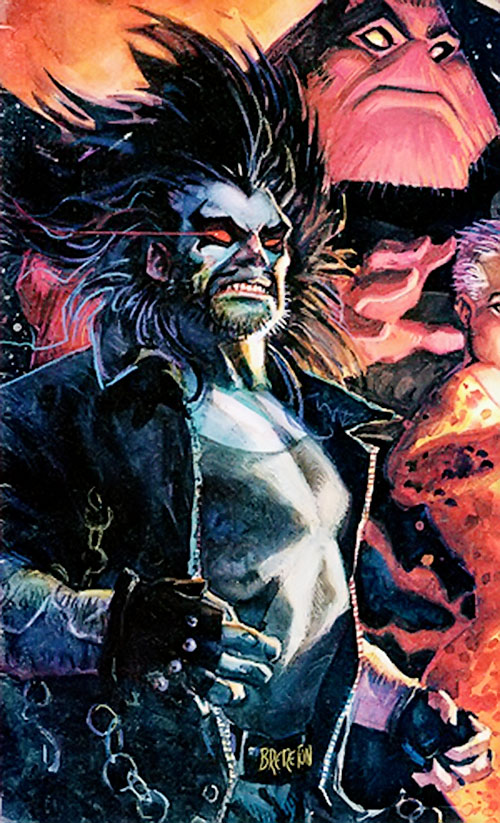 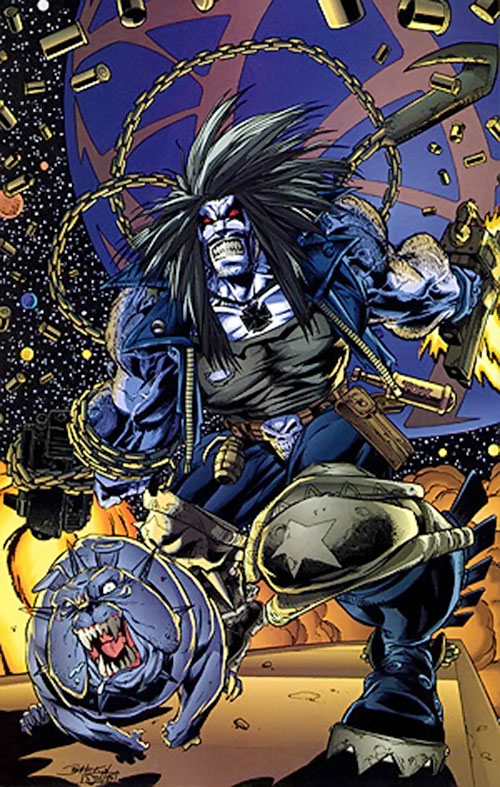 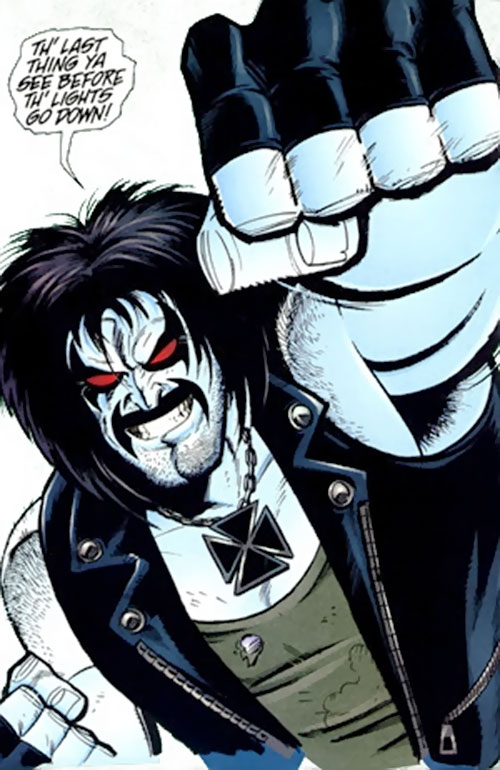 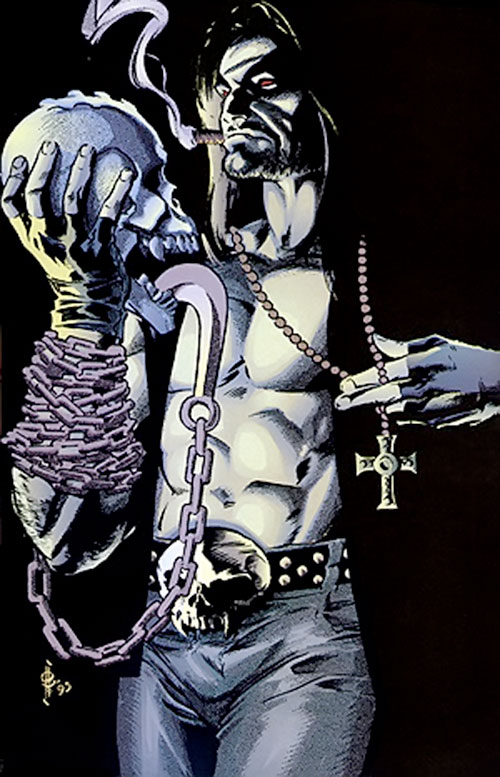