A highly trained fighter. Despite his abilities being “only” at peak human level, Lockdown was able to take down the Thing with a single blow, by striking a specific nerve cluster. Howbeit this was within Shadow City, so was likely helped by the environment giving him the upper hand.

His Battle Armor is armed with scanners, psionic  bafflers, communications technology. It can be sealed to supply an independent breathing system, protecting him from biotoxins.

He also carries a number of other devices, as noted in the game stats.

He drives the Night Cruiser. This is a heavily armoured flying car, which can be set to run on its own. It contains more powerful versions of the scanners in Lockdown’s costume.

Lockdown was the defender of Shadow City, a virtual reality game. His home planet in the Negative Zone  suffered a major disaster long ago, forcing the surviving residents to enter suspended animation within a vast underground complex. The virtual reality system was set up to maintain their mental health. 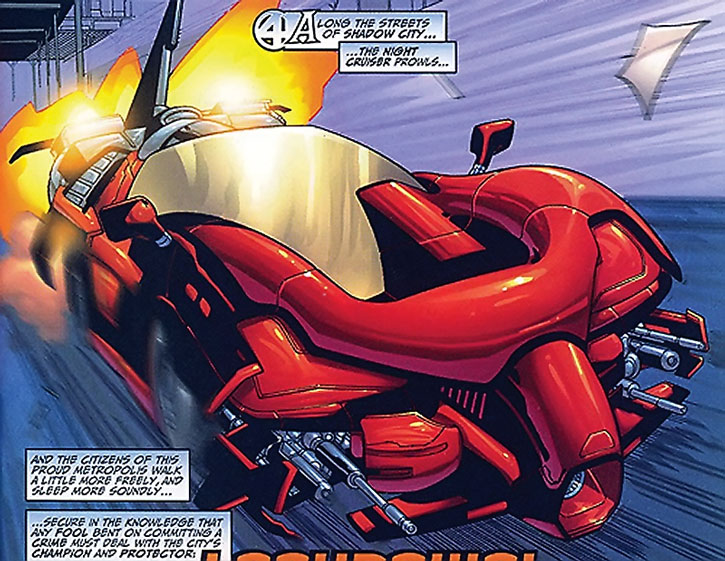 (This species appears like normal humans, and aspects of their culture are very close to elements of old Egyptian culture. But its unknown how the culture, and possibly the residents, ended up in the Negative Zone.)

In his civilian identity, Jomo was executive assistant to Nefer Neith Sinue, who was also his sidekick Rosetta Stone. “Executive assistant” seems to encompass a number of roles, including butler.

In costume, they worked to maintain the peace inside Shadow City. They fought such criminals as the Twisted Sisters, Redjek, Candlemas and Bolero.

They appear aware that they’re in a virtual reality environment. When trouble occurred within the real complex in which they’re stored that the robotic guards couldn’t handle, the pair were awakened. Yet in the real world, they apparently possessed the same abilities in the Shadow City.

Intruders stumbling on the planet were apprehended by the robots. These placed the outsiders into suspended animation where they were written into Shadow City. This is what happened to the Fantastic Four when they stumbled across the place. The FF thus became the known Shadow City criminals, the Tetrad.

Lockdown and Rosetta soon captured Richard Reed, Grim Ben, and Matchstick Johnny. But they were freed for custody by Stormy Sue, and soon allied with the Twisted Sisters.

Lockdown recaptured the lot of them when they tried to rob the Astra Technis science research facility. Richards secretly helped him. Richards had reverted to his true personality, but maintained the charade so as not to warn whoever, or whatever, may be watching.

Lockdown personally escorted the lot of them to Bedlam Purgatorium, Shadow City’s prison. This was despite his doubts about Warden, Dr. Edwina Dantes’, ability to keep them contained.

His fears were soon realised when Richards arranged a prison riot. Lockdown and Rosetta hurried to the scene. They managed to subdue most of the inmates, but not before Richards had managed to awaken his team mates from the suspended animation.

By the time Lockdown and Rosetta were awakened to deal with the intruders in the real world, they’d escaped back to their own dimension .

Considering them a potential threat to the safety of Shadow City, Lockdown set Rosetta to finding a way to follow them back to their dimension, so he could hunt them down.

When Earth’s heroes were kidnapped and coerced into a contest against one another by the Brood, one of the Scarlet Witch’s hexes transported Lockdown, Rosetta, and the Night Cruiser onto the Brood’s ship. 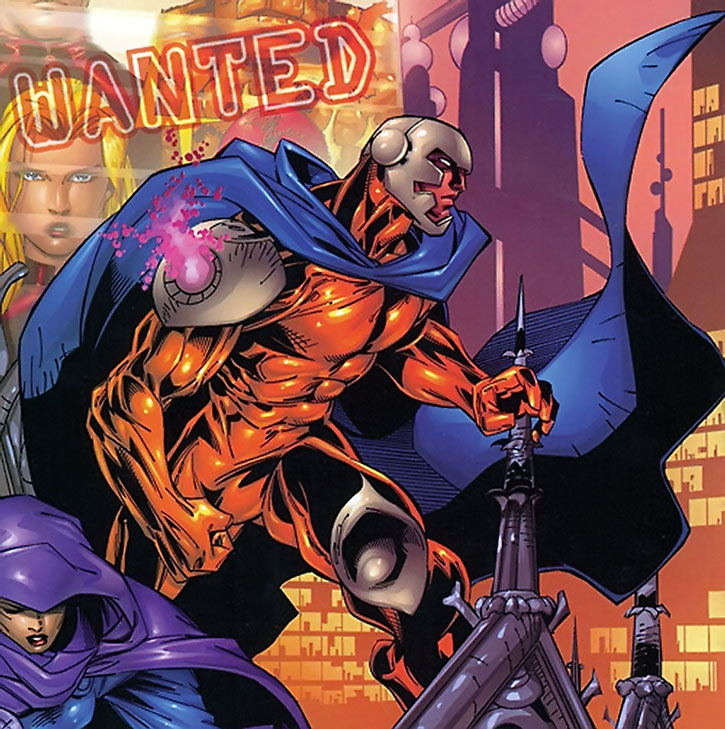 Rosetta quickly identified the nanites in the atmosphere affecting the other heroes. The pair thus remained sealed in their suits until Rosetta could produce nanite antibodies. Joining forces with Iron Man (Tony Stark) and Psylocke, they helped restore the heroes’ powers and free will.

While Lockdown and Psylock held off the Brood and their Badoon allies, Rosetta and Shadowcat took over the ship’s command centre. From there, they teleported the heroes back to Earth. The Brood Queen finally dealt with, Lockdown and Rosetta were reunited back on Earth.

It’s unknown whether they then found a way to return home, or whether they’re still on Earth.

(During one scene they were near to Johnny Storm, but made no mention of their previous history. He wasn’t aflame at the time, and would have been in a different costume from the time they encountered him. So it’s possible that they just didn’t recognize him. Or maybe, realizing they were on the Fantastic Four’s homeworld, they decided to stay to determine whether it posed any threat to theirs.)

Stoic, hard and unrelenting. Lockdown has little interest in the rehabilitation of criminals, seeing his job as simply keeping the peace. Yet he has little tolerance for needless brutality of prisoners.

He also seems protective of Rosetta, often keeping her away from combat.

He’s confident in his abilities. Possibly even overconfident, given that the system he usually operates in usually makes him unbeatable. His activities in an actual reality don’t appear to show him operating at less efficiency, but it’s uncertain how he’d respond if he did run into such difficulties.

“Set the Night-Cruiser on autodrive, Rosetta. It’s time for action !”

“Like all your kind, boy, you depend too much on brute power. You forget we possess wits as well. That’s why you’ll always lose.”

“The likes of you and your new confederates apparently never learn, do you, Helix ? If you commit the crime, you must be prepared to accept the just and lasting punishment !”

“Whatever your plan, I’ll anticipate it. Wherever you run, I’ll find you. However hard you fight, I’ll beat you. That’s not a promise. It isn’t even a threat. Simply plain, unvarnished, absolute reality.”

“At long last, I face a foe worthy of respect. Who might even be my equal. What man could ask for more ?”

“I am Lockdown. I make this offer once. Yield, or suffer the consequences.”

While in the virtual reality of Shadow City, Lockdown has a programmed advantage that stacks the odds in his favour. While in combat with Lockdown, other characters can only spend half as much Hero Points as they could normally, and Lockdown himself has access to 150 HPs.

Certain sources (the A-Z) claim that his car can fly. While the depictions are slightly vague, I’ll accept the source’s authority on this point. 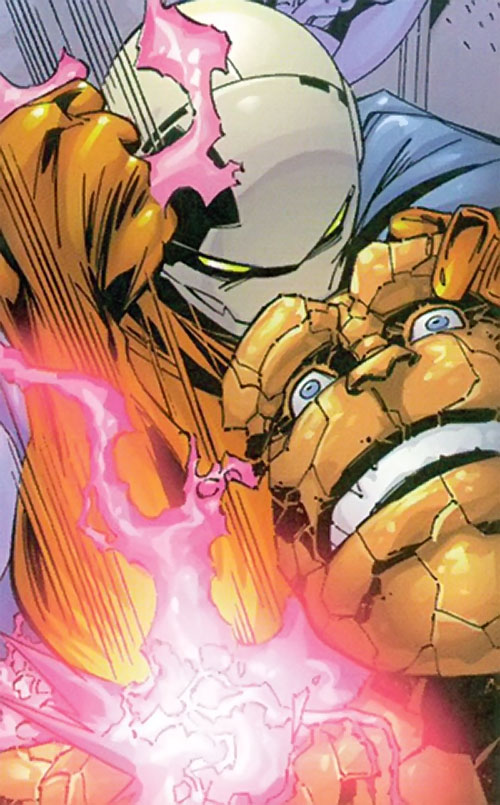 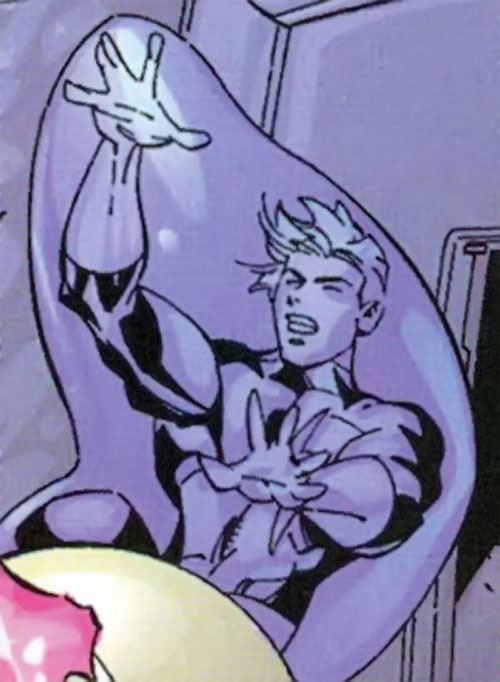