Professor Hopper is a comic book scientific genius. Thus, he’s an expert entomologist and chemist, and presumably a biologist, geneticist, high-energy physicist and engineer. He’s also surprisingly spry and strong for his age.

His distinctive Locust suit enhances his speed and strength (but not his agility). Furthermore, it is heavily armoured – it could take a blast from Cyclops without budging. It is armed with a “Ionic Stun Device”. This is a flashlight-like less-than-lethal energy gun intended to keep rebellious insects in line.

The “eyes” on the side of the helmet also somehow grant him superhuman peripheral vision, and the gloves can project nets of glue-coated silk.

Prof. Hopper carries a portable version of his “magno-ray”, a sort of flashlight emitting red light. The insects it is shone on will grow to at least human size within seconds. Though they can be given basic orders, the insects follow their instincts. For instance, herbivores like locusts can be quite useless and passive unless constantly given instructions.

He also carries a “ion-ray” that could disintegrate giant insects. But its performances are undocumented.

The power of Hopper’s mutated insects seem to directly depend upon how many times the eggs have been through the ionic bombardment treatment. Random insects exposed to the magno-ray in the wild are noticeably smaller than insects hatched from bombarded rays, and beetles that had been through three rounds of bombardment were the size of a SUV. Hopper carries irradiated eggs that can become giant insects in seconds under the red glare of his magno-ray.

Generally, insects enhanced by Hopper are slow, inadaptative and just follow their instincts. Conventional infantry can handle them… as long as the quantities of insects are not overwhelming. Furthermore, Hopper tends to enlarge relatively unaggressive insects such as locusts or beetles. When he uses more aggressive insects such as wasps, praying mantises, cockroaches, etc. things can get uglier, but that’s not his usual strategy.

Circa 1965, August Hopper was working as an entomologist for the New York City Metro College. Back then, this school was attended by numerous young heroes in their secret identity – including Jean Grey, Johnny Storm and Wyatt Wingfoot.

Hopper was fired for vehemently preaching in class about his eccentric theories about insectile mutations. But he soon found work as a scientist for nearby Ryan Chemicals. This firm had him continue developing his very powerful insecticide compounds, leaving him a lot of leeway given his talent. 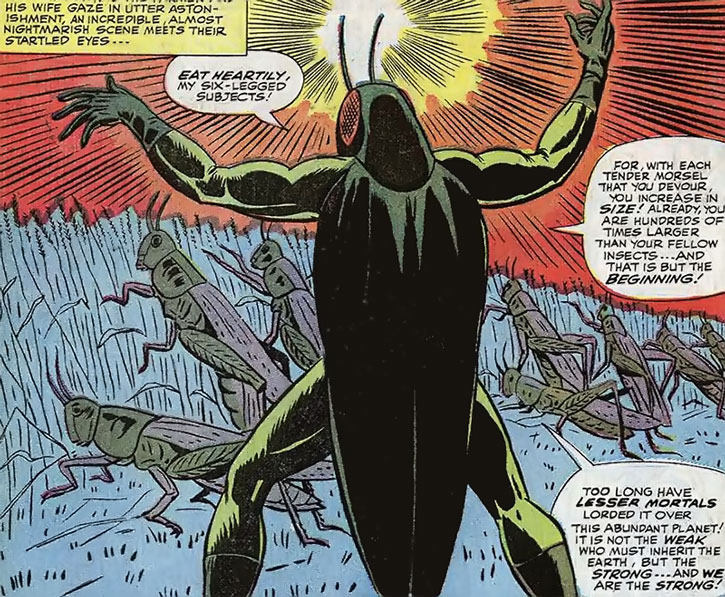 However, Hopper felt bitter. He thought that his genius was insufficiently recognised and that other researchers were unfairly taking credit for his work.

He came up with a plan where he would grow giant insects based on his mutation theories. These insects would be so powerful that fighting them would be unfeasible, and turning toward Professor Hopper to save mankind through super-insecticides would be the only recourse.

Hopper developed “ionic  treatments” (possibly related to the source of Wonder Man, Goliath and others’ powers). He also invented a “magno-ray” that could make all sorts of insects grow to an impossible size at an impossible speed.

Lastly, he created the identity of the Locust so he wouldn’t be recognised as he ran tests with his giant insects.

One such test in upstate New York drew the attention of the police and the National Guard – as well as the X-Men, who thought that the giant insects might be mutants. The X-Men killed most of giant grasshoppers they found, and the Guard finished the rest.

The mutants then investigated Hopper, who laid a trap for them near the Ohio river. The fight was inconclusive, and the National Guard again mopped up with rifles and flamethrowers.

Locust was defeated during the next battle. Marvel Girl (Jean Grey) destroyed his helm’s antennae without Hopper noticing and he was attacked by a pair of extra-large beetles. The X-Men rescued him as the beetles unwittingly destroyed his mobile lab.

As a result, Hopper saw that his plans had been inspired by megalomania and bitterness. He threw his equipment away and announced he would confess and surrender to the police.

Hopper spent roughly ten years in prison. It was presumably circa 1972 that his daughter Carol, a entomology student, married a farmer named Bob Hickman. Hopper was furious, thinking that his precious daughter was far too good for Hickman.

As soon as he got out of prison he resumed his Locust identity, razing Hickman’s farm and forcing the couple to flee. The Locust then chased them for months across the US and ruining everything on their path.

The Hickmans ended up in a small town that had already suffered from advance attacks by Hopper’s insects. However, the locals were determined to fight the threat. Mr. Hickman joined the local farmers’ stand. This valiant effort that may have ended tragically had the Hickmans not picked a hitchhiker some hours before – Dr. Bruce Banner.

When the Hulk attacked the insects, the Locust realised that he was outmatched and that his scheme had put his daughter in danger. The insects went out of control. Though Hopper thought they were going to kill Carol her husband held off a pair with but a pitchfork.

Realising that he had been wrong about Hickman’s worth when seeing his courage, the Locust surrendered. Meanwhile, the Hulk finished destroying the insects.

Hopper spent close to 15 years in a high-security prison. There his sanity kept degrading and he developed a fixation about insect supremacy. When X-Factor became famous circa 1990, he recognised them as the X-Men who had stopped him decades before. 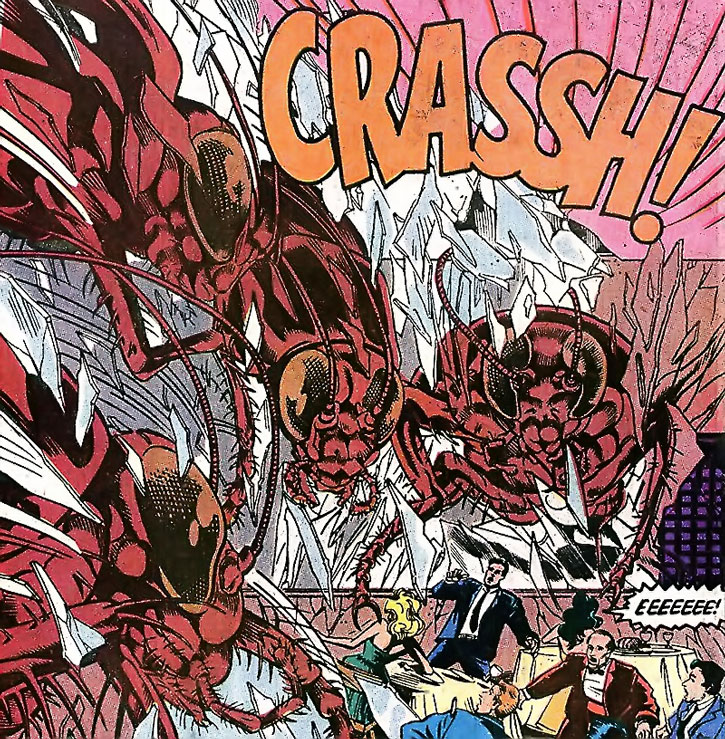 Hopper became insanely jealous. He thought that he and insects should get recognition, not mutants. He rebuilt his tech in the prison shop and escaped on the back of an enlarged moth. The Locust attacked X-Factor with an army of gigantic cockroaches in a high-rise restaurant, but was defeated in short order and arrested.

In 2002, Hopper again escaped. He launched some sort of massive blackmail plan using an army of insect, threatening mass devastation. The Order (Dr. Strange, Namor, the Silver Surfer and Hulk) responded due to the curse affecting them at that point, and swiftly put an end to the Locust’s threats.

Hopper has a Vincent Price look to him.

Professor Hopper is not well. He functions just fine, but will develop weird, megalomaniac fixations where he demands power for himself, or for his loved ones, or for his preferred scientific theories.

These obsessive, maniacal phases can be deflated by talking to him. However, talking with the Locust can be difficult in practice. On the other hand, convincing Hopper that he’s out of his gourd and needs to stop is not particularly difficult. Afterwards he will be genuinely contrite and try to make amends.

During his maniacal phases he talks very much like a Stan Lee supervillain and mad scientist.

Hopper’s sanity decayed from the late 1970s onward. As a result he developed a creed of insectile superiority and how insects must rule. This “ideology” actually seems to be mostly about a need to be dominant and recognised, with the insects being just a representation of Hopper.

The Locust can no longer be reasoned with, but will still surrender without much trouble once he’s defeated.

“The soil conditions are ideal for hatching my ionically-treated insect eggs ! And so this is the day of… the Locust !”

“Eat heartily, my six-legged subjects ! For, with each tender morsel that you devour, you increase in size ! Already, you are hundreds of time larger than your fellow insects… and that is but the beginning ! Too long have lesser mortals lorded it over this abundant planet ! It is not the weak who must inherit the Earth, but the strong… and we are the strong !”

“Babbling fool ! What do you — or anyone — know of… the Locust ? A thousand years hence, my name shall be revered… when the tombs of kings are but dust !”

“Feed well, my pretties… feed well ! Now only I, your leader, am present to hear your song of mounting menace ! But soon, the world shall know the meaning of that sound… and live in terror of it !”

“You mutants, landing in New York City in your fancy ship. So superior you think you are ! But you will be homo superior no longer ! There are few of you children of the atom — whereas my cockroaches are many ! Their small size alone has blocked their natural ascension to the pinnacle of evolution – but no longer ! For in blatella germanica, I have found my perfect subject. My magno-ray has blessed them with enormous size — and the cockroach will soon rule the Earth and continue to rule, long after humanity blows itself into oblivion !”

When you’re in prison

Between 1975 and 1990 Hopper’s sanity significantly degrades in prison. He develops a CIA toward insect supremacy – though it’s really megalomania expressed through his entomological fixation. His Wealth drops to 001, and his WIL seems to degrade to about 03. Other Mental and Spiritual stats also lost one AP, and he loses half his HPs.

The tech he used also seemed less efficient. The insects enlarged by the magno-ray were larger but not more powerful, his costume seemed to have lower protective properties and to no longer enhance his speed and Initiative, etc..

The power of the giant insects of the Locust is quite variable. It tends to be always just right to present some challenge — but not an actual danger — to the heroes. So go ahead and tailor the insects’ abilities to your PCs. Some observations : 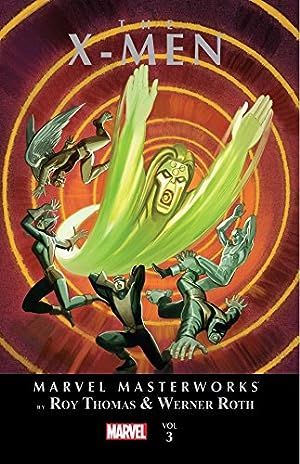 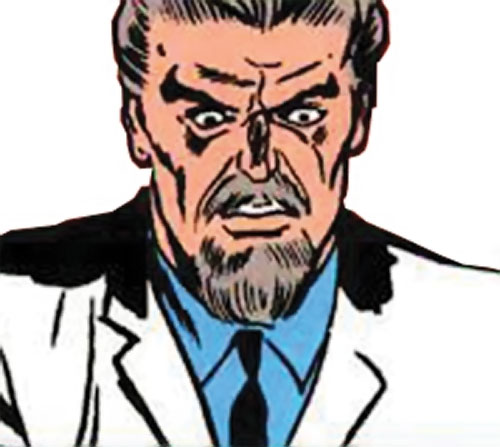 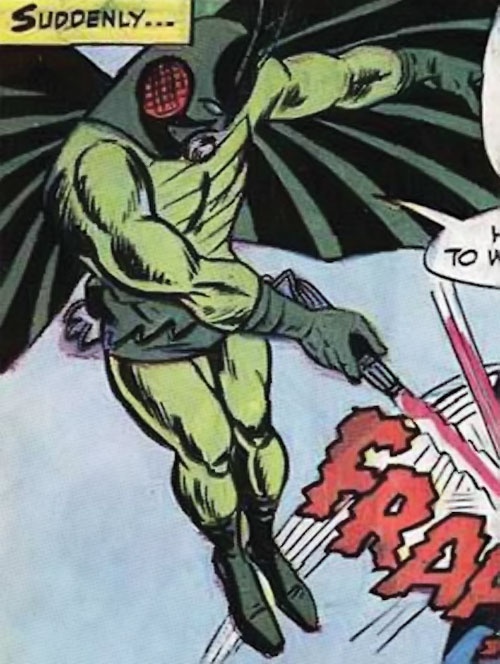 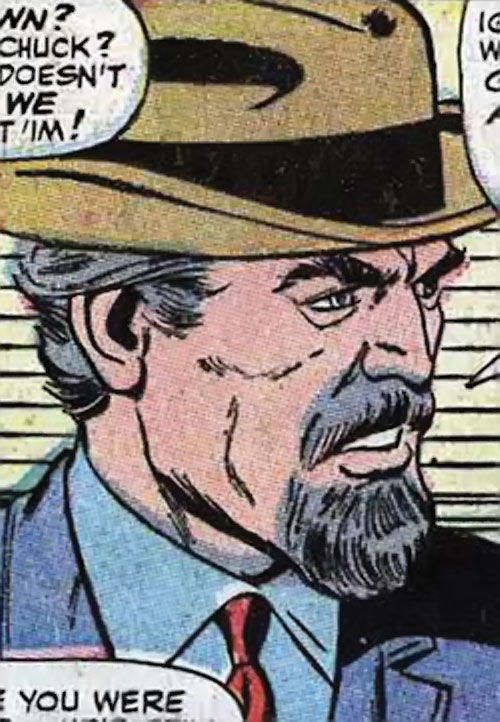 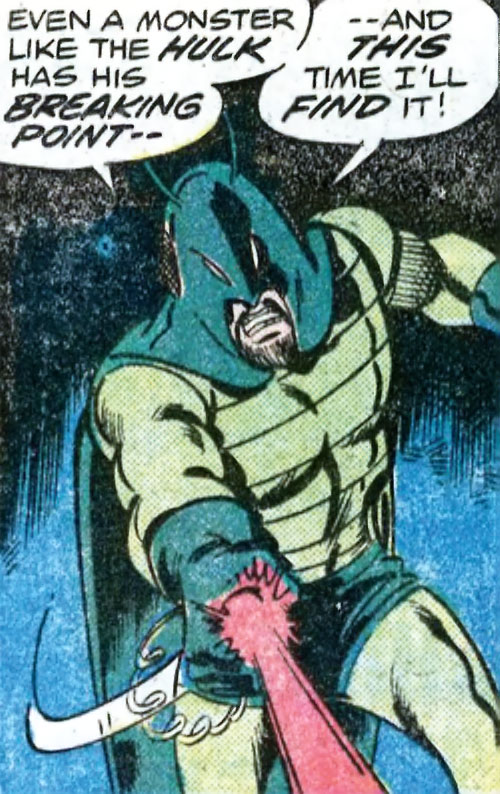 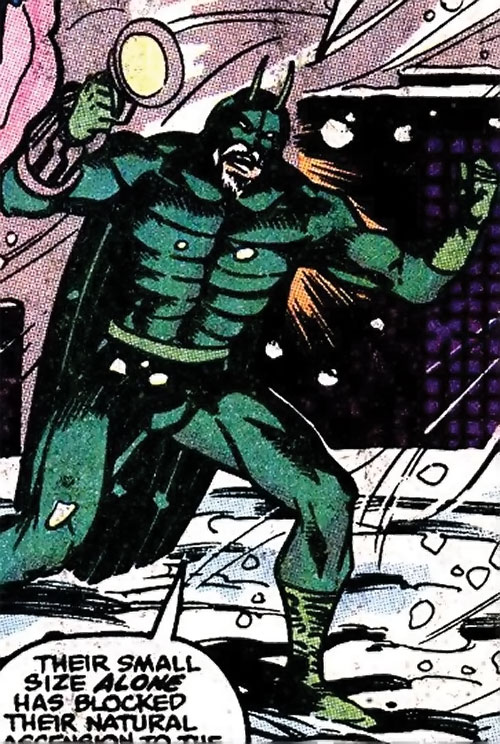