Jack Kirby’s Fourth World is a sort of jury-rigged cosmic mythology, using bits and bobs of old myths and reimagining them with the King’s unique, powerful artistic vision. It started appearing in DC Comics in 1970.

In this mythology, Lonar is one of the New Gods. He lives on New Genesis, the planet of the benign New Gods, headed by Highfather. Their opposite number is the people of the ghastly world of Apokolips, existing under the heel of the dreaded Darkseid.

Lonar’s continuity (and that of the New Gods in general) has always been a bit of a mess. That is presumably because everybody and their horse want to write Fourth World stories. As often, I’ve tried to downplay continuity issues in story and characterisation.

Lonar is a New God. Therefore, he has superhuman reflexes, agility, strength, durability, etc. plus great combat prowess. He can punch through metal and withstand superhuman blows.

Of course, he also has access to New Genesis technology, and in particular Mother Boxes.

Thunderer is Lonar’s super-horse, from the previous world. Which makes it the Galactus of equines. Sort of. It is a truly magnificent creature.

Thunderer seems to have enormous strength – it could kick through the thick wall of a fortress. It also can fly as fast as some New Gods capable of flight, such as Jezebelle. Though it may have been Lonar’s Mother Box doing the work, I assumed Thunderer could exist in deep space without hindrance. Thunderer is easily as big as the very largest Terran heavy war horses.

In some “near reboots” of the Fourth World, Thunderer was mistakenly called Thunder.

Lonar is one of the young gods of Supertown, also called the New Gods. However, he’s an unusual one. He was the only one to shun the satellite city, continuously wandering the main world below. Fascinated by the past, he explored many ruins and natural wonders to be found planetside. A lone explorer, Lonar just carried a bedroll, some trekking equipment and his Mother Box. 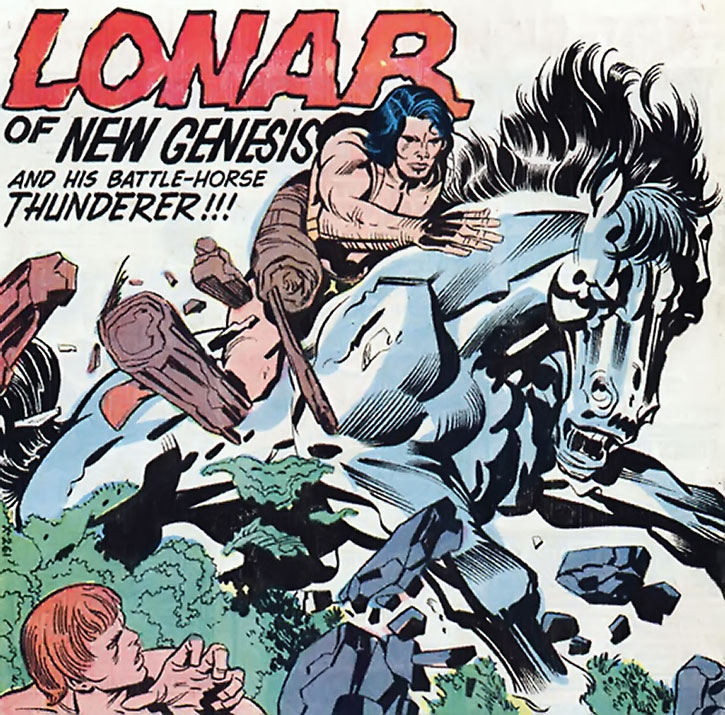 Once, he found nuked ruins from the time of the Elder Gods. He was fascinated by the artefacts he found, sadly commenting on the warlike traits of the destroyed culture. Unbelievably, his Mother Box then detected a life form that had been plunged into suspended animation by the great war. This is how they unearthed a silvery battle horse.

As the ruins caught fire, Lonar jumped astride. He and the horse escaped from the fire. For the first time in aeons the plains of New Genesis knew hoof beats.

Lonar named his powerful, beautiful horse “Thunderer”. When he happened on his fellow New God Orion, who had retreated to New Genesis to be alone, Orion was awed by the animal (and that it was one of the very few survivors of the Third World). Unfortunately, Orion’s touch spooked the animal due to his fearsome warlike nature as the son of Darkseid.

Some years later, the Source warned the New Gods of a new scheme by Darkseid to discover the Anti-Life Equation. Lonar, Orion, Lightray, Jezebelle, Metron and the Forager left for Apokolips and then for Earth as Metron determined what was going on. 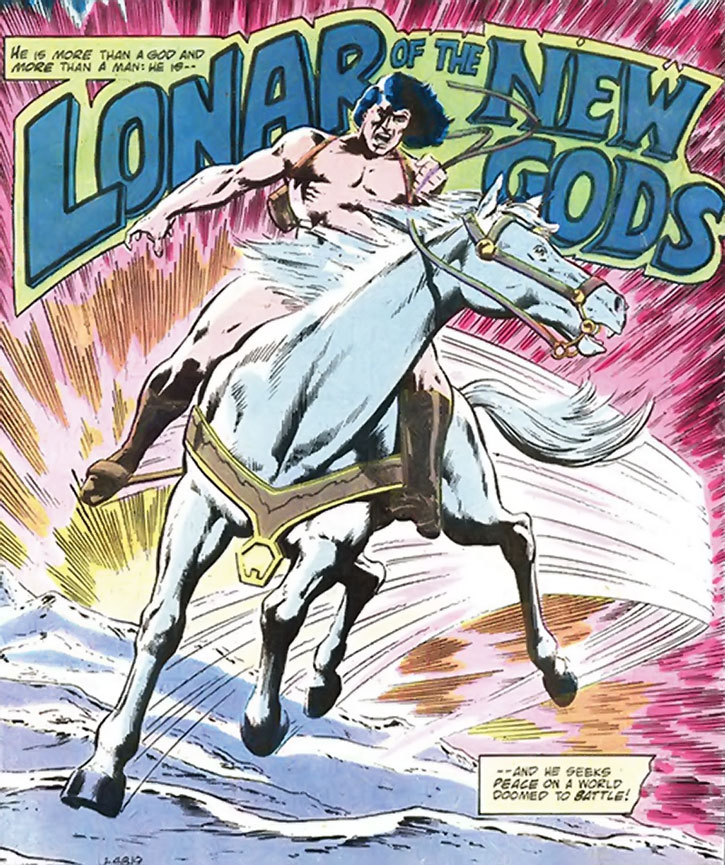 The task force of New Gods split up to protect bearers of fragments of the Equation. Highfather assigned Lonar to Alaska and an Inuit  guy named Nomak.

When Apokolipsian forces struck, it was with a plot cleverly designed to exploit the character flaws of the New Gods. A helpless child from Granny Goodness’s orphanages, Lucifar, was dropped in Alaska, and the natives rescued him. Nomak and his wife ended up adopting the kid.

Being unused to dealing with people, Lonar did not know how to handle such a complicated situation. He asked Lightray for advice, which was not the best idea. Lightray decided to take the child, Nomak and his wife to New Genesis, since separating the couple from the adopted kid was out of question.

This was a poor decision. The Alaskans were terrified by the Boom Tube and otherworldly grandeur of Supertown. They thought that they had died and gone to Hell. Highfather was furious at the reckless action of Lightray. He explained that Lucifar had been traded for the boy Esak as part of the peace treaty between New Genesis and Apokolips.

Para-demons then attacked. In the chaos, Nomak and his wife were separated from the New Gods. Darkseid teleported in, taking one-sixth of the Anti-Life Equation from Nomak’s mind. Lonar attempted to protect his charges and return them home, but was seemingly killed by Darkseid.

Post-Crisis, Lonar was back. Presumably, the events chronicled above happened in a slightly different way in the post-Crisis universe, that did not result in Lonar’s death.

When Highfather needed to assemble a cadre of champions for the Cosmic Odyssey  quest, he sent Lonar to the White House. There Lonar requested specific people to serve as ambassadors to New Genesis – the Martian Manhunter, Starfire, Batman, Green Lantern John Stewart, Superman and Jason Blood.

In the revised continuity, Lonar wasn’t a lone explorer. He was the head of off-world operations among Highfather’s Elite. Lonar was thus present when Orion worked on brokering peace between the New Gods and the humanoid insects empire on New Genesis (aka the Bugs).

It was decided that a part of the negotiation would be decided by a traditional duel between champions, and Highfather designated Lonar.

To Lonar’s dismay, the Bugs’s champion was a female – the new Forager. Though the Forager had superior speed, agility and guile, the reluctant Lonar was much stronger and tougher and he prevailed.

Impressed by the fighting spirit and prowess of his opponent, Lonar refused to finish her off. He helped her make her way to medical care and claimed he would be proud to fight at her side against any foe. Thus, the fight was instrumental in sealing a complete peace treaty between gods and insects.

Highfather’s Elite eventually broke down as a governing council due to ambitions and power plays. Unsurprisingly, Lonar was the one who stuck with Highfather. Highfather then dissolved the council and resumed his one-man rule.

Later, the Source-like energies given off by the War of the Gods  on Earth led to a mistaken war between New Genesis and Apokolips. Lonar was of course among the defenders of Supertown, though the Highfather put an end to the needless fighting. 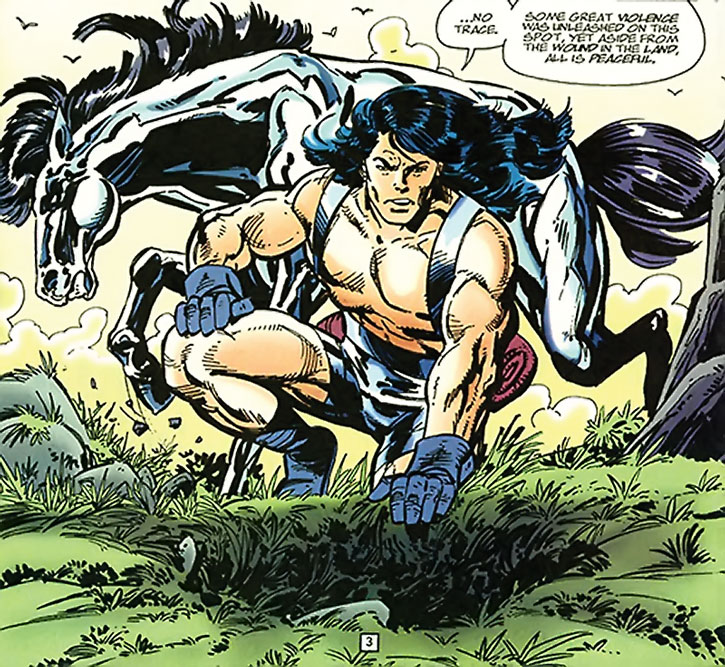 After the dissolution of the Elite, Lonar returned to what I assume was his previous life — a solitary wanderer on planetside New Genesis.

When some young New Gods were ambushed on the surface, he came to investigate. The lone warrior found the corpse of the young god Harmon. He then captured would-be ambusher Mad Harriet of the Female Furies of Apokolips. He then rode to Supertown to warn Highfather of an impending attack from Apokolips.

As part of his explorations, Lonar later went to check a fallback planet. That is, a world that had been chosen by Highfather to serve as a refuge for the New Gods if New Genesis was ever destroyed. Lonar soon discovered that the entire planet had been turned into a death trap. The handful of New Gods manning it had been killed.

That was the work of Devilance the Pursuer, a feared agent of Darkseid. Early on in his struggle against the million traps and defence systems, Lonar was separated from his horse. As a result, Thunderer was captured. Refusing to leave without his best friend, Lonar spent years fighting against the traps of the planet. Only his tremendous strength and skills allowed him to survive.

Lonar eventually ran into the Blue Beetle (Jamie Reyes). The youth had come to fetch his friend Brenda, who had ended up there due to a Mother Box mishap. After some confusion and fighting, Blue Beetle and Lonar allied to storm the central command post Devilance had left behind. The two heroes wrecked the place, thus disarming the planet, and Lonar freed Thunderer.

Death of the New Gods, possibly

A few months later, a major event struck New Genesis. Unfortunately a major editorial mistake means there are two very different stories as to what happened. It is possible that the Source took physical form. Then, to usher in the Fifth World, it killed all New Gods on New Genesis and Apokolips both, including Lonar.

Or it is possible that Darkseid won the eternal war and cast the New Gods away into new, mortal incarnations trapped in a bleaker reality on Earth. As of this writing, the later sounds more likely.

Lonar is a New God of great bravery and discipline. He is unerringly loyal toward Highfather. Something of an outsider among the New Gods, he enjoys exploring New Genesis and other worlds to discover traces of the distant past, when the Old Gods ruled.

He dislikes war and disapproves of warlike traits. Yet, he understand the necessity of battle. This has limits, though. For instance the idea of fighting and hitting a woman, even one of the generally hated Bugs, made him very uneasy.

As his name implies, Lonar is a loner. Hanging around in deserted places with just his horse is what he wants. He’s a misanthrope (though not in a bad way) and even prefers the places he explores to be stark and barren. Post-Crisis he’s no longer an out-and-out loner, but is still one of the New Gods who spend the most time alone and away from Supertown.

He managed to be both part of the inner core and an outsider not taking part in politics – the latter may in fact be why Highfather chose him to join the inner core.

The recent Blue Beetle characterisation had Lonar as a roaming fantasy barbarian fighter hero. He is forever fighting evil and being a great champion. He has the general sword-and-fur-loincloth look and loves battle and other heroics.

But he’s also close to a paladin  who is concerned about saving maidens, fighting off monsters, protecting innocents, saving the day, etc.

Perhaps because Lonar was depicted with a winged helmet at some points in the past, this characterisation has him speaking a very slightly-pseudo-Shakespearian English. Howbeit, he stops short of the thees and thous.

As noted in the amusing exchange with Blue Beetle quoted below, he has the power of delivering old-school Kirby speeches and sentences that are, though grammatically correct, greater than life.

“Of all the places on this planet Earth, this ice-swept region most perfectly suits my nature. Barren, lifeless, eternal ! It exists without strife or struggle. And the people of this Alaska, the natives called Eskimo… They too are kindred to my soul. I’m grateful Highfather chose this location for us to patrol, Thunderer !”

Lonar: “Your young lady speaks the truth ! ’twas not I but the vile indigenous ratlings of this accursed orb, who meant to sacrifice this lovely wayward traveller to their dark heathen gods !”
Blue Beetle (blank stare, silence): “I would not even know how to construct that sentence. You are from one speechifying planet.”

It is possible that Major Mapleleaf II’s magical flying horse Thunder is the same steed as the pre-Crisis’s Lonar. Horses presumably can dial up a transuniversal Boom Tube, after all.

Bonuses and Limitations:
Sealed Systems presumably extends to the rider.

Advantages:
Attractive (toward all horse lovers).

Drawbacks:
He’s a horse, of course.

Helper(s): Darci, Black Adam. The stats are derived from those in the DCH module The Law of Darkness, written by Scott Paul Maykrantz, which are considered v1 for this entry. At this time there was little to benchmark Lonar, but those “boilerplate New Gods-level” stats seem to be a perfectly good starting point. And… there’s not much newer material to benchmark him with anyway. 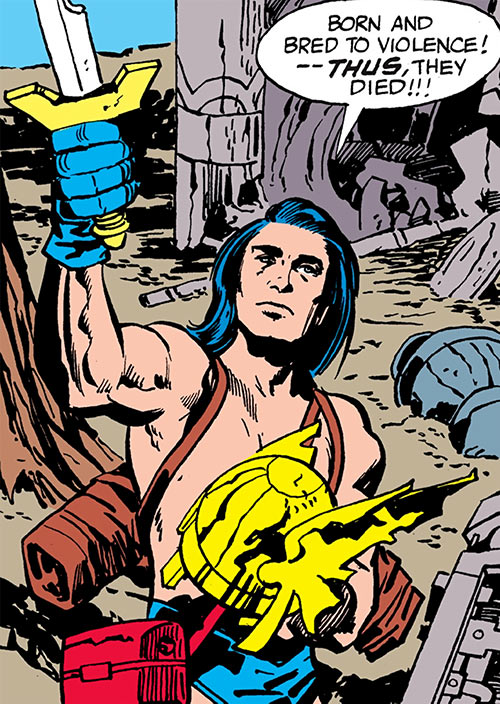 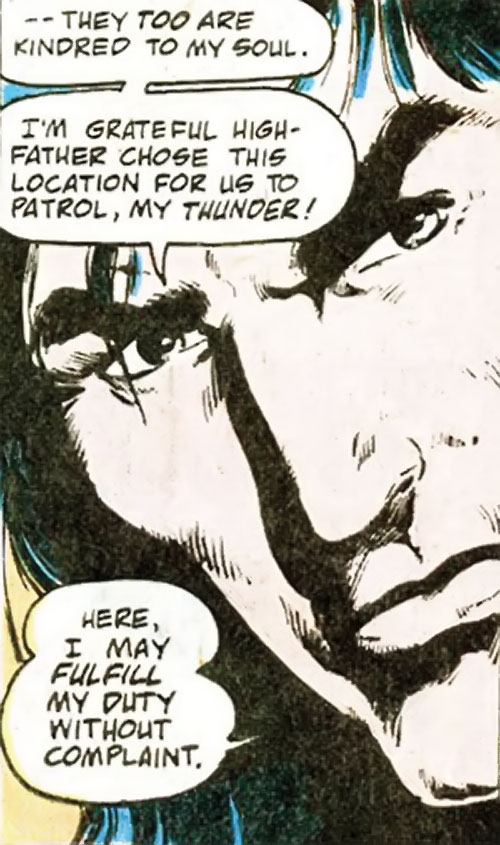 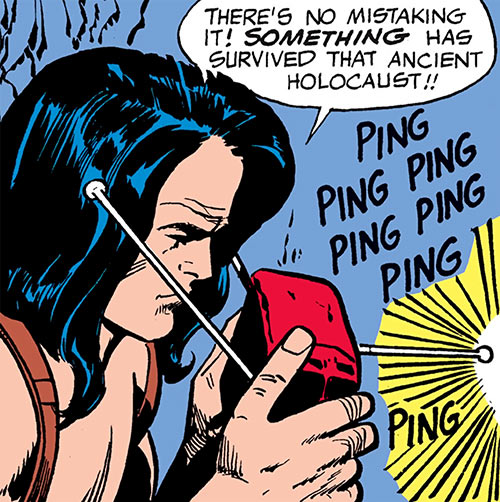 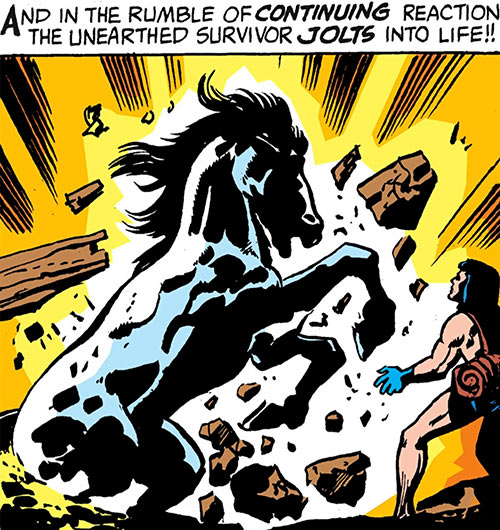 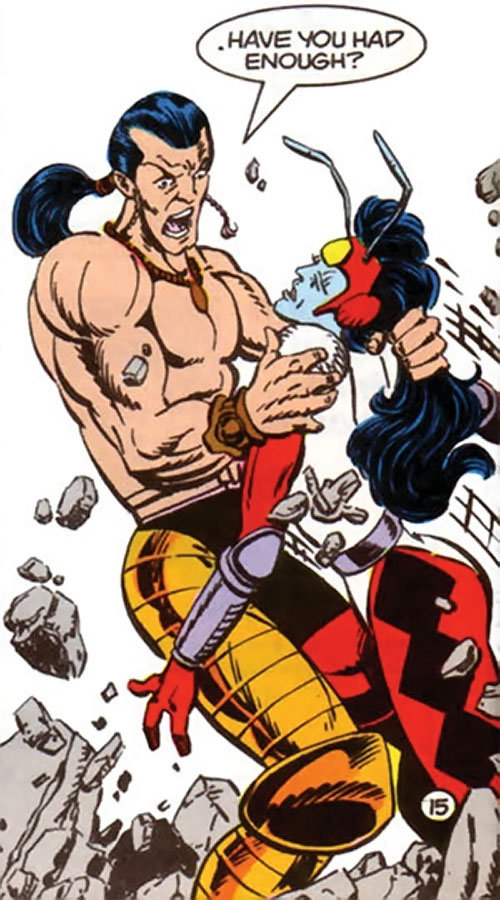 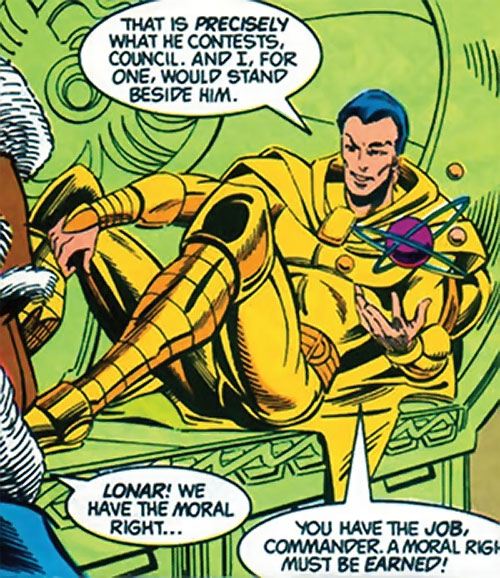