Longshot is exceptionally strong for his size and weight, extraordinarily agile and dexterous, and virtually fearless. Furthermore, he has a wild luck power that pulls strings for him when his motives are pure (that is, unselfish) (in DC Heroes RPG terms, Probability Control and Ultra-Luck).

This “force” which provides his luck seems to be aware, as his luck has been withdrawn even while Longshot was not aware his motive was selfish. This “force” has also proven able to heal Longshot from what would have been a fatal wounding (Invulnerability, Regeneration).

Longshot may read the psychic aura of an object and may perceive the thoughts and emotions of those who have handled (or will handle in the future) the object (Empathy, Postcognition and Precognition).

Longshot is a synthetic being created in another dimension by beings known only as the Spineless Ones to serve as amusement. Eventually the slave race was granted awareness by their creator, Arize. Arize is a rogue engineer who had formerly served the Spineless Ones but sought to create a rebellion against his former masters.

Longshot became a legendary heroic figure in the rebellion on his homeworld. But he was finally captured by the Spineless ones, who artificially induced amnesia in him so he would be a submissive slave again. Nevertheless, the amnesiac Longshot escaped and ran with hunters on his tail, found an interdimensional portal, and fled through it to Earth.

There he was dubbed “Longshot” because he continually acted against heavy odds in his exploits. While on Earth he battled the hunters from his own world, and against Spiral and Gog and Magog. He also befriended stuntwoman Ricochet Rita.

Mojo ultimately came to Earth. He was determined to prevent Longshot from returning to Mojoworld and telling the humanoid slaves how Earth was peopled by human beings like themselves. Mojo feared that this would inspire further rebellion. Once coming to Earth, Mojo began planning to conquer the world and enslave its population, as well.

By this time, Longshot had recovered enough memory to recall his true origins. Aided by Dr. Strange, Ricochet Rita, and another Rebel leader, Quark, Longshot defeated Mojo by forcing him into a dimensional portal, planning to strand him in another dimension. 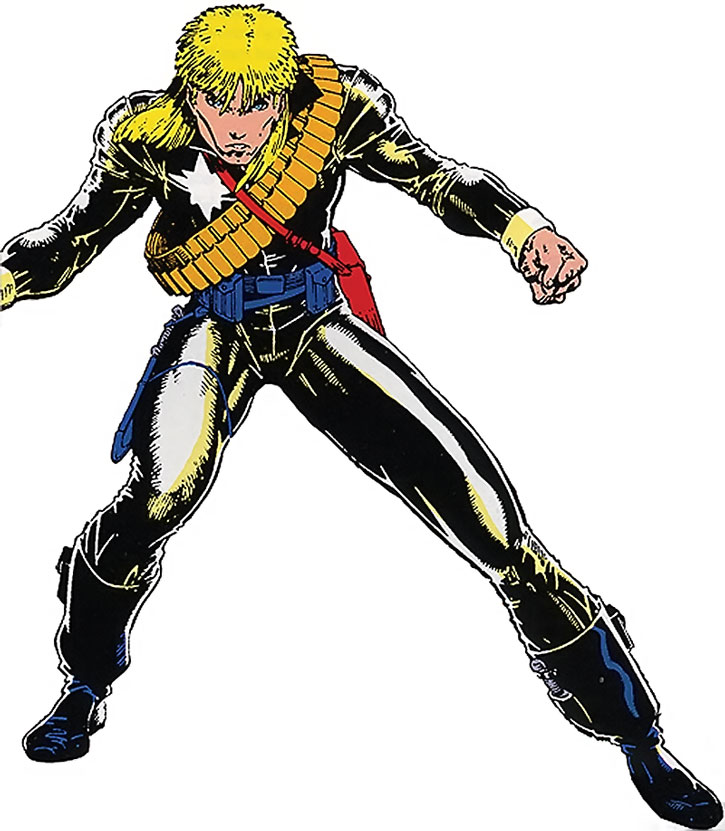 It seems that they failed, because eventually Mojo decided to mess with the X-Men and popped Longshot into the X-Men’s Danger Room. Mojo then de-aged the X-Men and brainwashed them, forcing the New Mutants (in their way cool graduation costumes) to confront their elders.

The X-Men broke Mojo’s hold over them and Mojo fled back to his own dimension. Longshot remained a member of the team until sometime before their journey through the Siege Perilous.

Much later, Longshot returned to his homeworld and with the help of the X-Men overthrew Mojo. He led the new government and was last seen with his lover, Dazzler (who was pregnant).

It has surfaced, however, that Longshot is somehow doomed to forever fail in his revolutionary efforts, and Mojoverse is still in the grip of war.

Longshot wears a black leather jacket and pants. He has long shoulder length blond hair, and only four fingers on each hand. Longshot is incredibly lucky, and is amnesiac with little memory of his past (he eventually regained most of his memories.)

When he uses his powers, his left eye shines brightly.

Longshot is a man with no past, and therefore has no fears about his future. He initially comes across as a quintessential Thrill-Seeker in terms of Motivation, but as his memories surface, he evolves, quickly taking on the Responsibility of Power (helping others in need) and Seeking Justice (leading the fight against Mojo) Motivations. 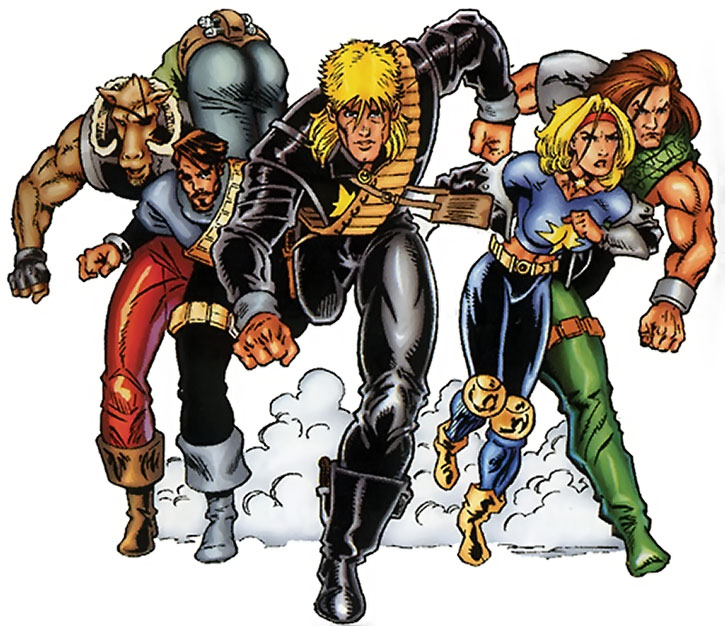 He will never turn aside when someone needs help.

Longshot sees our world (not his own) with fresh, new eyes. As such he often will seem a little odd or distracted to his companions (he once referred to ham and eggs as “dead, burned animal flesh and unborn baby birds… yum !”). At the same time he is oddly intense and focused, especially when he has a task at hand.

Originally he was a truly heroic character who was out of place in a world not his own. Chris Claremont later wrote him as a member of the X-Men essentially as comic relief. This writeup is heavily weighted to the former. When Jim Lee wrote the story where the X-Men helped overthrow Mojo, he seemed to favor that version as well.

The difference between the two versions can be explained simply by the idea that the second time he came to Earth, Mojo did a better job at wiping his mind. This is borne out by the fact that while he was with the X-Men, he experienced no regaining of memories, while in his mini, he recovered fully in a few weeks.

Longshot’s mini was so separate from the Marvel Universe that the entire story could be transplanted with ease. Longshot would have encounters with Batman instead of his run-in with Spider-Man, Wonder Woman instead of She-Hulk, and would seek the assistance of Dr. Fate or another top-notch sorcerer instead of Dr. Strange.

Drawbacks:
Arch Enemy [Mojo], Enemy [Spiral], Exile: Involuntary, Innocent, Misc: Body mass is 1 AP, Misc: For much of his career, Longshot suffers from near-total Amnesia, Traumatic Flashbacks [When running across a “familiar” item which may spark a memory], Married [Dazzler, 0].

Longshot has essentially two different versions: the mini-series version and the X-Men version. As a solo adventurer, he has no contact with the X-Men, and loses his Married drawback. When serving with the X-Men, take away all other connections, as he cannot remember them.

As opposed to the Luck Advantage, Ultra Luck grants an amazing amount of luck. Once per adventure, the Character can re-roll any one Dice Action, but the subsequent roll must be kept no matter what, even if it is double ones.

Any bonus rolls granted by rolling doubles may not be re-rolled by this Advantage. The character can re-roll the Dice Action of others as long as he is involved in either the AV/EV or OV/RV.

(This is the early version of the power that has since ended up in BOH:SE. We keep it around because of reasons.)
Mystical Power
Link: Infl
Range: Normal.
Type: Dice.
Base Cost: 300
Factor Cost: 09

This power allows control over the force of chance itself. Probability Control may be used to control the probability of a target succeeding at a task. In order to do this, the user must make a Mystical attack against a target by rolling a Control Check with the AV/EV equal to the APs of the Power and the OV/RV equal to the target’s Infl/Spirit, adjusted as follows.

Any RAPs gained from the Control Check (therefore known as CCs) may be added to or subtracted from any RAPs achieved by that specific target’s next successful Dice Action performed within the next CCs number of phases. Reducing or increasing a target’s RAPs requires no action. Assuming enough CCs are gained, the target’s Dice Action can be rendered completely ineffective.

CCs can only bring the RAPs total to 0 (no less) or up to double the total RAPs, and any extra or unspent CCs are lost. The target may spend Hero Points to negate CCs in the same manner as Last Ditch Defense, but they must be spent immediately after the Control Check.

If the Character with Probability Control is knocked unconscious (or is killed) before the target’s next Dice Action, the CCs become ineffective and are lost.

Probability Control may also affect Automatic Actions. Roll a Control Check as normal. Achieving any CCs means that one of the next two Automatic Actions of the target (Controller’s choice) fails. As above, the target can spend Hero Points equal to the CCs achieved to negate this this effect.

For each use, roll a Chance Check with the AV/EV equal to APs of the Power and the OV/RV based on the Probability Chart below. If the target includes any Luck-based Advantages/Drawbacks, including participants, increase or decrease the OV/RV as above.

To cause the Reliability Number to fail for a Gadget or Artifact, determine the OV/RV by subtracting the Reliability from 14/14 (i.e. A Gadget with a R# of 6 has a OV/RV of 8/8).

Source of Character: Marvel Comics (Most notably the Longshot mini-series and X-Men). 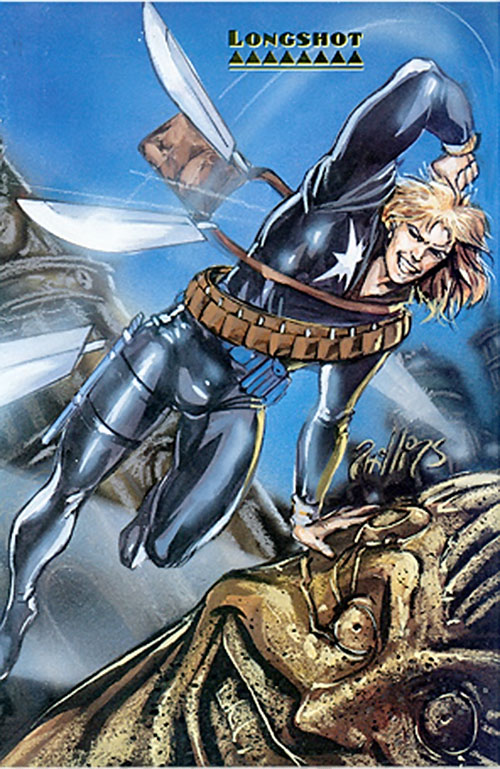 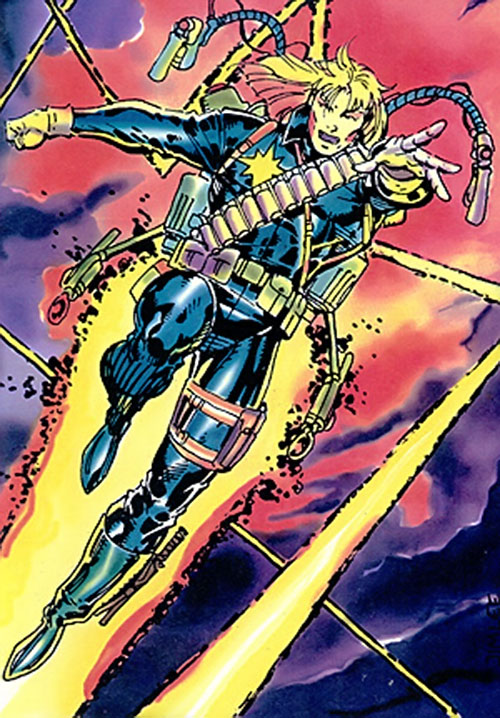