This profile is meant to be read after the Death-Man character profile.

This Lord Death Man (LDM) profile is focused on his Grant-Morrison  -penned appearances. However, it includes material from later appearances that refers to the Morrison era.

This is because the feel of the character changed after those stories were told. Particularly the Harley Quinn material, which is set in a different genre.

This writeups straddles the pre-New-52 and post-New-52 continuities. Since this continuity rupture occurred during the long Leviathan story arcs. But the changes didn’t seem to affect LDM.

Lord Death Man retains his maniacal intensity. If anything, it seems even greater. That lets him act faster, from lack of hesitation.

His action skills, which were not clearly demonstrated in 1966, are now on display. He’s a deadly gunman, stunt driver, hand-to-hand fighter and athlete.

There too, the ability to act without fear bolsters his physical performance. It is also possible that he received League of Assassins elite training.

Lord Death Man is a meticulous planner. Being immortal, he thinks nothing of spending years to gather intelligence, build death traps and conduct other preparations. This accrued work can make him seem like a master planner.

Lord Death Man probably is fluent in Japanese. He is familiar with the criminal underworld of the USA, Japan and perhaps other countries. 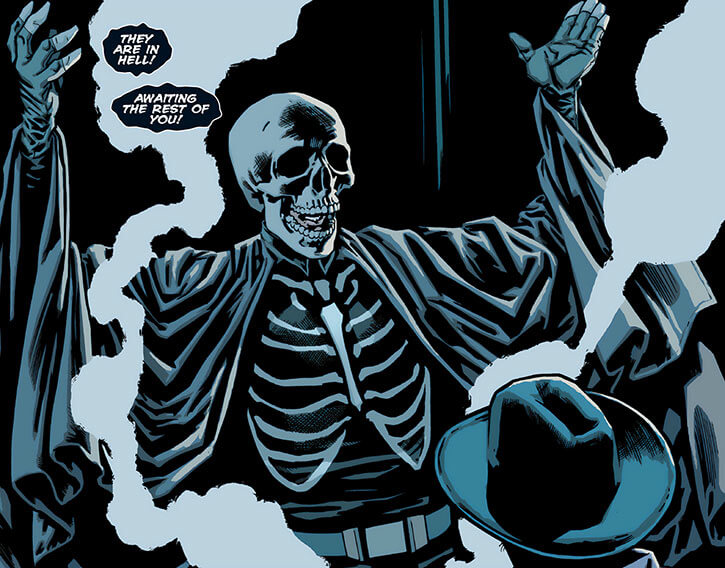 He is usually accompanied by a half-dozen determined henchmen. These wield .45 ACP pistols, swords or baseball bats – depending on the mission.

The henchmen have been called the “men of death”, which is League of Assassins terminology. They wear costumes that are close to Death-Man’s 1966 outfit.

Death Man himself is partial to Thompson M1928 submachineguns. He might even dual-wield those if the situation calls for volume rather than accuracy.

As in 1966 he enjoys operating with a powerful, distinctive-looking car. It resembled the Mercedes Vision EQS show car  . His henchmen will escort him in muscle cars – often convertibles, to facilitate gunfire.

Lord Death Man likely can obtain resources from the Leviathan super-cult/super-mob. While in Japan, he also built up enormous financial resources, extensive underworld connections and at least one large secret base.

Lord Death Man is allegedly immortal. Both in the sense of having an unlimited lifespan, and of being impossible to kill.

He is superhumanly regenerative, and his tissues heal even when he’s clinically dead. It’s not Wolverine-fast – killing him will stick for several hours. But it seems entirely dependable. It can be made a bit faster by keeping tissues close together. LDM once did that using a stapler.

Lord Death Man isn’t any harder to kill than a normal person. A couple well-placed 9x19mm bullets will suffice. It’s just that it won’t stick.

On the other hand he’s superhumanly resilient to pain. Perhaps because he knows for a fact that he cannot truly be hurt. 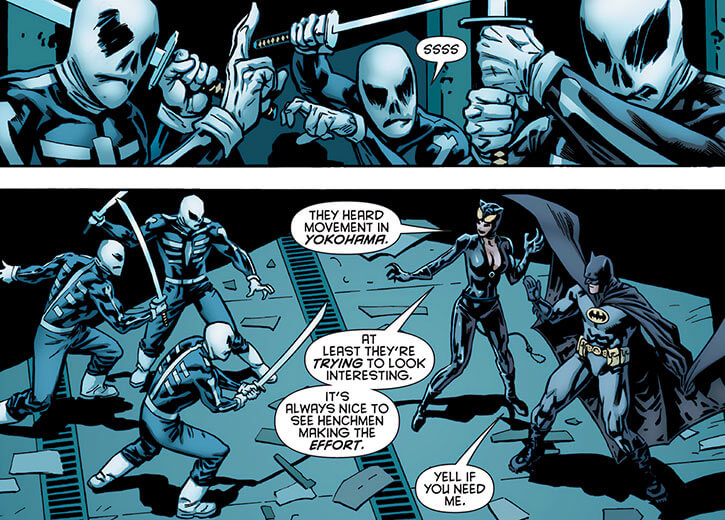 Malice is an easy cure

Lord Death Man is a known associate of the Leviathan, and this is a Grant Morrison story. These two facts suggest a *possible* explanation for his immortality :

Our friend Occcam’s RazorA logic rule about favouring the explanation involving the fewest entities. suggests there might be a tie between the Undry Cauldron and the Lazarus Pits. 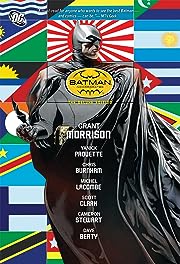 After Batman defeated him, Death-Man (who eventually renamed himself Lord Death Man) dropped off the radar.

Apparently, that was because his plans were now so long-term as to take years. Since he became an immortal, after some unclear contact with Mother Soul.

Once he gained his “Lazarus blood” Lord Death Man now viewed himself as an elemental agent of murder, violence and chaos. But he was also a patient one.

As he amassed resources, LDM built himself a not-that-secret base under an arcade in Tōkyō.

Given Japan’s minuscule rate of violent, anti-social crime, he decided to “take them to school”. LDM planned an extensive, over-the-top, sadistic crime and terrorism campaign.

This onslaught would kill off most major Japanese crime-fighters. It would also horrify the public through such attacks as blowing up school buses used by handicapped children.

It is presumably during this span that he took in a metahuman apprentice, Flatline (Nika). However : 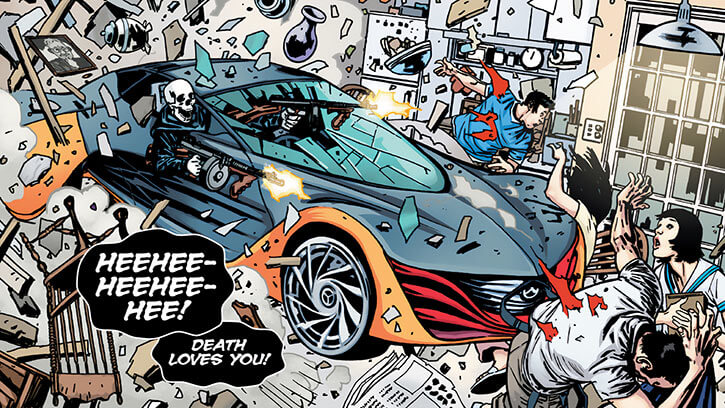 The original was gruesomely killed by Death-Man. But Osamu-san survived. He then allied with Batman (Bruce Wayne) and Catwoman (Selina Kyle).

Wayne noticed a discreet theme to this stage of LDM’s rampage – water. In hindsight, it likely was Leviathan symbolism rather than a part of LDM’s M.O..

This insight allowed the trio to save Shiny Happy Aquazon, of the Super Young Team, from LDM’s brutal onslaught.

No one can hear you scream

LDM was expertly captured, restrained, exfiltrated and crammed into a small capsule. Which was then put in orbit by either the Japan Aerospace eXploration Agency  , or a local Waynetech firm.

However, LDM had previously unknown ties with the Leviathan super-conspiracy. It was presumably they who recovered him, and he resumed his service with Leviathan.

Working for Batman, Inc. the Outsiders invaded a secret Leviathan orbital base.

They thus learned how the organisation employed armies of trained fanatics to take apart, move and rebuild its secret bases in a seemingly impossible short time.

The last Leviathan teams on the satellite were accompanied by Lord Death Man. He triggered the self-destruct sequence to take the Outsiders with him, but Metamorpho had experience with such situations.

The Outsiders let themselves be thought dead for a while, so they could operate discreetly.

LDM was then held for years by Ra’s al Ghul and Ebeneezer Darrk.

They sought ways to use his blood as a substitute for Lazarus Pit liquid. And perhaps as a way to compensate for its madness effect.

But despite all the researchers’ efforts, LDM’s blood was too tainted. Exsanguination did provide useful compounds, but not what Ra’s needed.

During that time, there was an underworld rumour that Ra’s al Ghul held a captive whose blood provided immortality. Russian assassins alleged that it was Chernobog the Dark God, presumably because that sounded cool.

During the late 2010s, LDM escaped. But his demeanour, resources, fixations, etc. were now different.

During this span, LDM acts a demented agent of death, cruelty, chaos and suffering.

His modus operandi is somewhat reminiscent of the movie version of the Joker (the 2008 Heath Ledger interpretation). But he’s more gratuitously murderous, and not as brilliant.

LDM wants to terrorise, kill and maim through complex plans that rely on surprise, time tables and shock.

His manic, nearly hysterical intensity has heightened. He seeks to be as cruel, shocking and randomly murderous as he can.

The 1960s puns are completely gone. They were replaced by an emphatic fixation on death, morbid imagery and mortality.

One secondary theme was that he was a weeaboo. He sought to incorporate aspects of Japanese consumer goods — usually the trashier and low-brow ones — into his motif.

But this was more a string of aesthetics choice than a “theme” in a Silver AgeSuper-hero comics from the late 1950s to the early 1970s. Batman villain sense.

(Addressing his henchmen) “I’m back, men of death. Like I promised. No graves deep enough to hold mighty Lord Death-Man, didn’t say I ? Playtime for the reaper !”

“Did you ever wonder what it’s like to be dead ? Let me tell you, it’s soul-black dark on the far shore and there’s this smell… but grim oblivion’s time out for me, that’s all. And we have a timetable to keep.”

“Heeheehee ! I found a way to resist death itself, but you’ll never know my secret ! You think I value life ? I wear the grin beneath the skin, the future seen in every smile.”

Underworld (High), Street (Low). And a Low Connection with Flatline, but at this point she’s still a young girl.

Loss Vulnerability (LDM’s abilities and personality can decay, depending on the amount of Lazarus-like compounds left in his blood), Strange Appearance.

There isn’t much data to assess his abilities, so the scores are cobbled from what I could find. The DEX, for instance, draws from a fight with Talon (Calvin Rose), which occurs after this era.

LDM seems to have but a moderate BODY score during this era. But this is mostly based on Jiro killing him with an ordinary pistol. And it is likely that Jiro was spending Hero Points, and he may have rolled a double as well.

But, since it’s the main data point…

It is also worth noting that LDM will never spend HPs on RV enhancement, Last Ditch Defence and other survivability options. Why should he ?

The “regeneration continues after death” is, as is traditional, drawn from Mayfair’s stats for Cain and Abel.