Defile is a Daemonite High Lord. He is a corruptor, on both physical and mental perspective.

As a Daemonite, he has the ability to invest a host body. Though, normally he would die from exposure to Earth’s atmosphere, it is not clear if his status as High Lord brought him beyond that weakness. Anyway, he still has some feature from his true forms like Clawed fingers and tough skin.

As a political Daemonite leader, he is also a master plotter.

When the Daemonite spaceship crashed on Earth, there was 3 High Lord aboard: the ship captain who died in the crash, Helspont was the military leader and Defile was the political leader.

Unlike his fellow surviving Daemonite High Lord, Defile doesn’t seek the destruction of mankind. He wants its ultimate corruption to obey his free will, or its death for resisting. For that, he has constantly plotted in the shadows of History. For example, he was the one to introduce gas bombs during the WWI. He usually maneuvers other influential people to do his bidding.

More recently, he put in motion a long time scheme by getting the 3 captured members of StormWatch Prime (Flashpoint, Nautika and Sunburst – captured by the MERCs during the Gulf War), and brainwashing them. As his puppets, they sent StormWatch classified information to pit the UN’s organization against his long time foe : Emp and his WildCATs.

By capturing Maul, brainwashing him to carry a nuke in a volcano, he got Battalion “killed”. This aroused StormWatch’s wrath against the WildCATs.

By sending Mr White to impersonate Maul in the midst of the WildCATs, he expected to kill Emp. This plan was exposed by Santini and his Black Razors. Since Maul had been captured by StormWatch after the Nuke incident, the WildCATs were now also mad at them. And they start fighting each other.

That’s when the third key to the Daemonite warship was uncovered. If the 3 keys could reunited, and the warship found, the owner has access to the destructive potential of the dreadnought. As Daemonite High Lords, Defile had one, Helspont another, the third was the captain’s.

The race for the keys and the ship began. It involved all the WildStorm heroes. Even StormWatch and the WildCATs worked together, because Void had a vision of the outcome of the crisis if the ship fell in the wrong hands. In the end, it appeared that the ship was the Kherubim’s ; but it still held great firepower.

In the struggle for its control, Defile unleashed his StormWatch pets (minus Flashpoint who was in custody for having cold bloodedly killed a MERC). Sunburst destroyed Spartan’s body, then managed to break Defile’s influence and was crippled by his wife Nautika. As his plan failed again, Defile retreated and hasn’t been heard of again as of this writing.

Defile looks like a tall, strong human with white skin. He wears a Conanesque armor topped with a hugely horned helmet and covered by a cape.

Defile’s a twisted plotter. He seeks control of the Earth and his inhabitants through intrigues and manipulations. He far more enjoys to let the other unknowingly do his work than acting directly himself or his henchmen.

Because he was able to raise White from the dead, I gave him Invulnerability Usable on Others Daemonites, even after some time. I know there was a house rule for a Resurrection power hanging around, but I lost track of the thread. Anyone in the mood of putting it together is welcome. As he brainwashed StormWatch prime, I give him Hypnotism, but it could be a gadget. 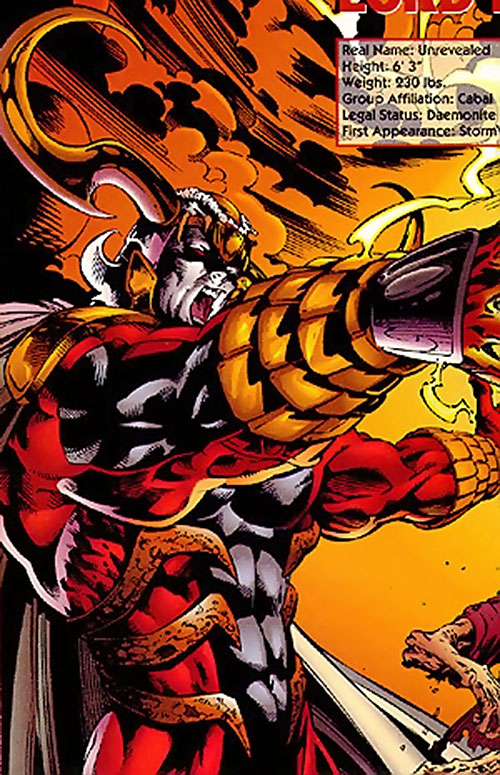