A matter of naming

There appears to be some ambiguity as to whether their home planet is called Earth or Angor.

Conversely, there are a few quotes where they’re referring to “other Earths”, one of which comes before they could really have learned of such. I’ve left out specific references from the History to the name of the planet (apart from the initial one defining its official place in the current DC Multiverse).

A genius inventor, particularly in the field of robotics, Lord Havok created a metal which obeyed his thoughts. He then used it to create an artificial arm and legs as prosthetics for his missing limbs.

The metal also became the armour he now wears apparently all the time. It provides him full mobility, as well as heightening his strength and durability to superhuman levels. It can also fire blasts of an unidentified type of energy, and he can form blades out of its malleable metal.

Son of Czar Nikolai III of Russia, Alexi was born disfigured. His legs and left arm were so withered they would have to be amputated. The left half of his face requiring him to wear a mask. His enraged father would have thrown him in the fire at birth had Alexi’s mother not stopped it.

His father refused to have anything to do with the cripple. His mother had to continue protecting him from the Czar’s temper.

Alexi displayed a talent for robotics from an early age. When he was old enough his mother sent him abroad to the United States of Angor to study, and to get him safely distant from the Czar. His mechanical aptitudes continued to grow, and he created liquid metal prosthetics for himself.

A coup of sorts

While studying in Angor, he learned of his mother’s death at his father’s hands. This occured learned she was secretly supporting Alexi. Angered, he returned home, meeting his father at her grave, where he first displayed the Lord Havok armour, killing his father. 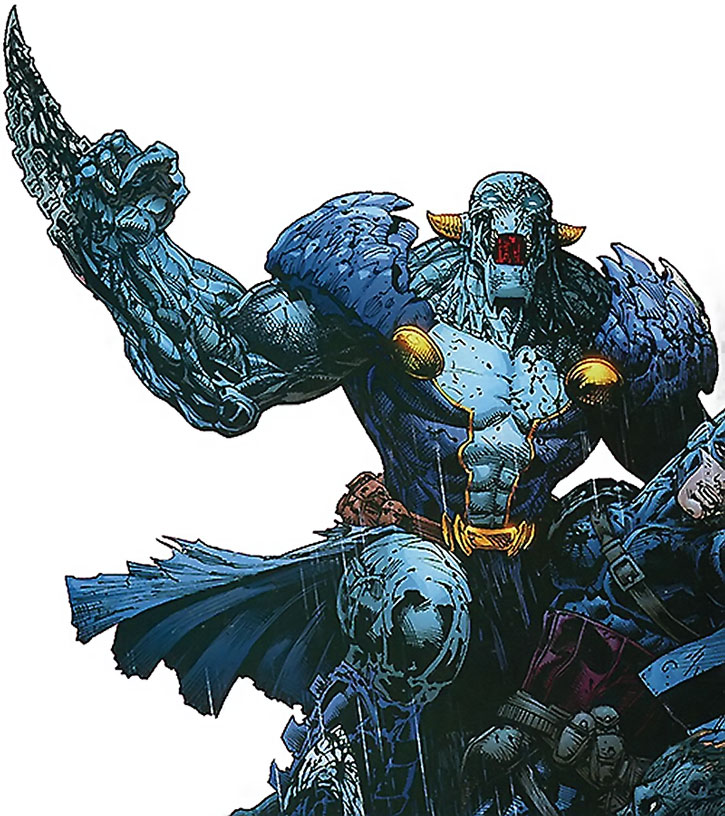 Lord Havok then surrounded Russia with devices of his creation. He gave the population 24 hours to evacuate, then obliterated the country.

With the international outrage, he became a wanted terrorist. He thus went about recruiting others to support him.

They joined him in forming the Extremists, a group labelled ’terrorists’ by the increasingly fascistic Angor.

Angor’s increasing aggressiveness had been due to the extreme amount of metahuman conflict causing so much damage to the general public. It resulted in the election of the first metahuman President, Tin Man, with Americommando as his Vice-President.

They enacted the Metahuman Act, requiring all metahumans to serve them as part of the Meta Militia . Those who refused faced arrest, concentration camps, and according to rumours, execution.

The Extremists had been together five years when Lord Havok escalated their stance against the US. He did so by murdering President Tin Man on live TV.

The United States of Angor then became incensed at Lord Havok’s taking over of Slovekia and execution of the royal family. President Americommando threatened invasion even without the sanction of the International Council.

Soon after, Monarch appeared with some of his cross-dimensional super army. He invited the Extremists to join him. They refused, and a brief fight ensues between the Extremists, Monarch’s army, and the escaping Challengers. Barracuda was killed in this fray. The Challengers escaped, and Monarch withdrew, making a temporary alliance with Americommando.

When Tracer was badly beaten by Monarch’s troops, Lord Havok recalled the Extremists to Slovekia. There they waited while the Meta-Militia fought through Lord Havok’s army of Havokoids, and tried to break through the force field surrounding Slovekia.

Tensions among the group escalated as attacks were made on places important to them. The Experiment House, the Temple of Dreamology, and the Academy for Advanced Children were all destroyed by Monarch’s forces. 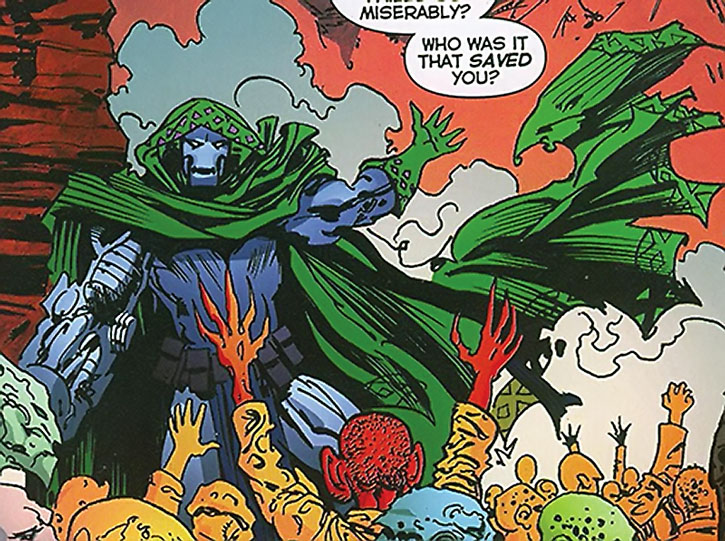 Doctor Diehard, his family and home destroyed, lashed out at Lord Havok’s inaction. He openly challenged him, and tried to get the other Extremists on his side. He failed, and they killed him on Lord Havok’s orders.

The Meta Militia, led by Americommando, and aided by Monarch, broke through the field surrounding Slovekia. The remaining Extremists fell quickly before them while Lord Havok remained ensconced within his lab. The invading force finally reached a large empty room. It neutralized the powers of all within except the Extremists, who’d freed themselves and followed them in.

The only enemy survivors of the ensuing slaughter were Monarch, and President Americommando. Americommando had been taken down by Vice-President Bluejay, who’d turned against him in the earlier battle, believing he’d taken Angor in the wrong direction.

Returning (most of) Monarch’s power, Lord Havok agreed that the Extremists would serve him. Joining Monarchs army, the Extremists were part of the invasion of Earth-51. It eventually went bad, when Superman-Prime arrived, breaching Monarch’s armour and causing an explosion which annihilated all life.

Before it could take them, though, Lord Havok used the fragment of power he hadn’t returned to Monarch. He tapped it to teleport the Extremists safely back to their own universe. There they took up residence in a base he’d constructed within the Moon, from where he could observe the Multiverse and make plans.

Cold and ruthless, Lord Havok will do whatever he needs to. He will manipulate and sacrifice anyone for what he believes is right. While he has shown flashes of temper, he’s usually fully of control of the situation, harnessing his anger rather than letting it control him.

He appears to regret some actions, but will do them if he feels it necessary. One example is when he hesitated killing the young son of the Slovekian royal family. He did do it, but was affected, and destroyed the Havokite who questioned his hesitation.

While he wishes to change the world, he doesn’t seem to feel the need to rule it personally. While he opposed the way the United States of Angor was being run, and effectively ruling the world, he was willing to allow Blue Jay, whom he had a degree of respect for, to assume control and fix things. But he did warn him the Extremists would be watching.

“You all know me as Lord Havok. Tin Man was but the first. From this moment forth, my fellow Extremists and I will eliminate every tyrannical imbecile foolish enough to accept the mantle of President. They will call us criminals for this. They will label us terrorists for this. But please keep this in mind… one man’s terrorist is another man’s freedom fighter. And whether you are aware of it yet or not… we are your freedom fighters.”

“What we’ve done can be undone, and easily, if we’re not careful.”

[Facing Monarch] “I’ve heard enough ! You are nothing but a pretender — a pale imitation of me — and there is only room on Angor for one Lord Havok !”

“You can have my answer now, Monarch, if you’d like. No. And if that isn’t clear enough for you, I’ll write it in your own blood !”

With Lord Havok being a counterpart of Doctor Doom in the Marvel Universe, the Extremists might do best as being from an alternate reality.

Rituals:
All he’s revealed so far is the ability to briefly bind the Dreamslayer entity, which was done years ago when he considered himself merely a novice.
Bind Demon [Casting Time: 02, Control (Possessing Demon only): 09].

He has a large number of these guard robots. They seem to have a degree of independent thought, even querying Lord Havok’s actions, although doing so can get them destroyed.

Lord Havok has been shown in a few different headquarters. One was in the palace in Slovekia, and his latest within the Moon. But he likely has more hidden or abandoned around the planet.

The extent of their technology is unclear. All that’s been seen so far is the ability to scan all terrestrial media, view distant scenes via cameras in Havokoids, and view their home planet from within their moon. They likely contain other stuff, such as psi-shields, a variety of scanners, and defensive mechanisms.

In his Slovekia base he built a large room which neutralised the powers of all within it apart from the Extremists. Referred to as his lab, its true nature was kept secret from everyone. He allowed no one to enter until he was ready to use it as a trap. [Neutralise (Area Effect, doesn’t affect Extremists): 25].

His moon base also allows him to view the Earths of other dimensions [Dimension Travel (Only to other Earths, allows Remote Sensing): 10, Remote Sensing: 25]. Presumably it also has some means of returning them to their planet, and possibly allowing them to travel elsewhere in the Multiverse. 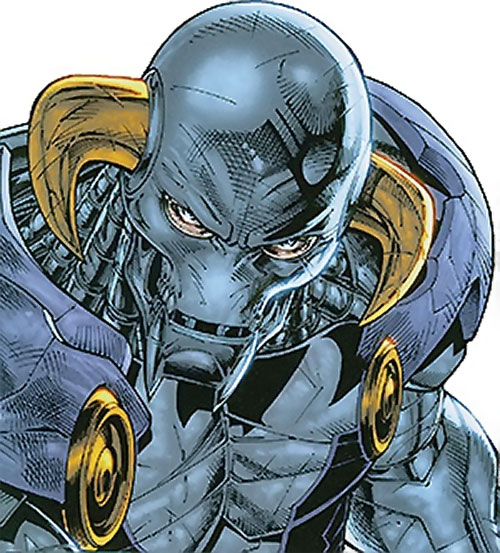 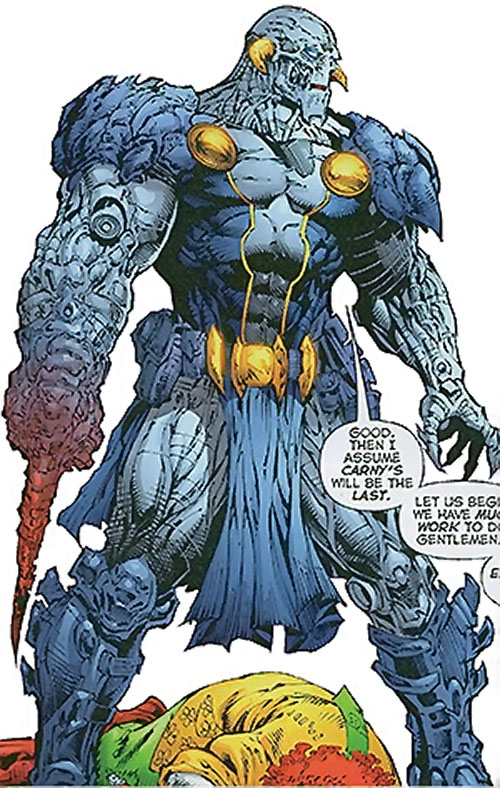 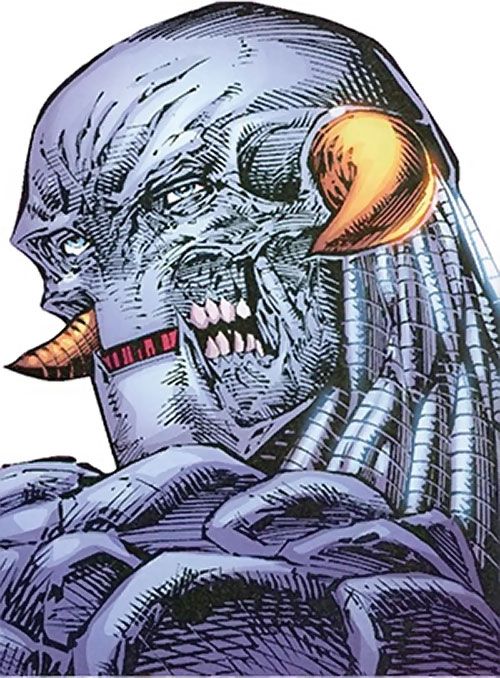 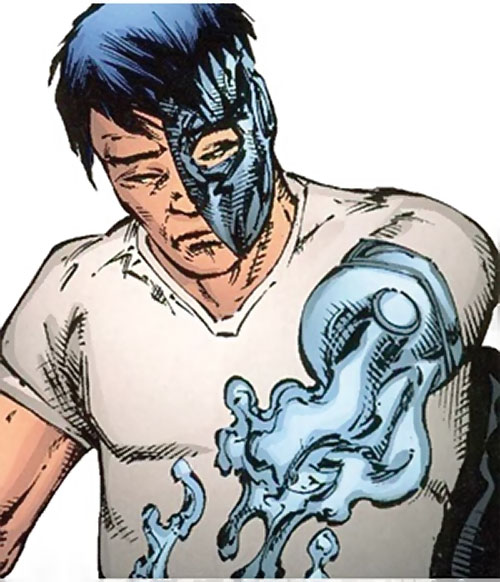 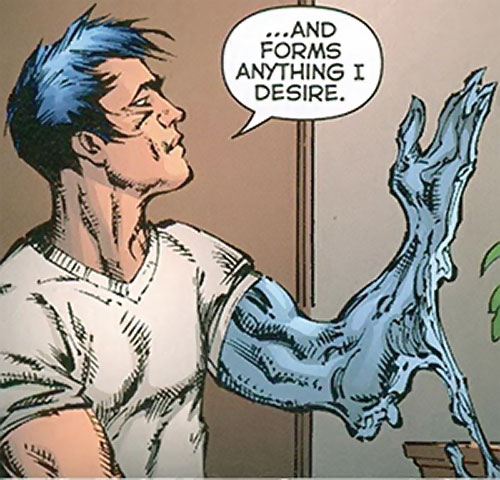 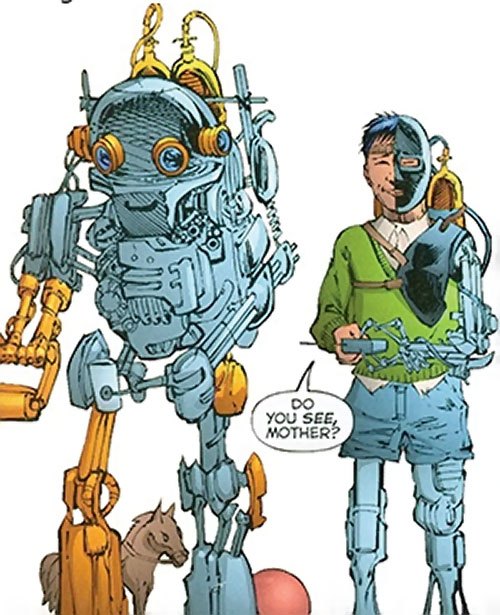 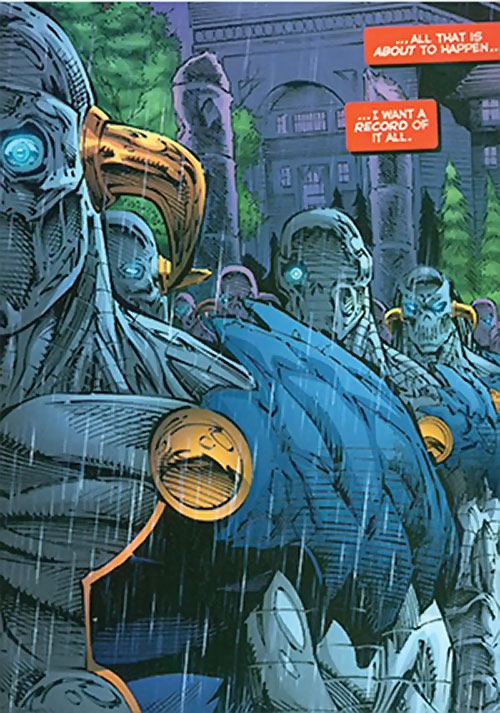