Ronny is a big tough guy, but he is intellectually disabled. His only noteworthy skill is that he’s used to handling a sword.

The magical longsword, Lore, boosts Ronny’s physical abilities to superhuman levels and does all of the thinking. Furthermore it has a few mystical/psionic  powers, a powerful personality, lots of occult knowledge, and can impart superb swordsmanship skills to its recipient.

Given its intelligence and tactical skill, Lore leads the Posse.

Lore is an ancient magical sword. It has been passed from warrior to warrior since medieval times, but ended up as a display in a museum. The intelligent, wilful sword pondered its fate. It had always been wielded by powerful persons of strong will, and always had been a servant. It was time, the sword decided, to become the master.

One day at the museum came a perfect vessel. Ronny Fisk is a young, big guy with great strength. He and the rest of his special education class were visiting the museum when the sword psychically contacted him. Ronny was transfixed.

He came back the following night to steal the sword and live the life it had promised him. Ronny never regretted this. Lore brought him everything he lacked.

The sword, looking for power, needed money. A chance encounter with other superhumans made it conceive a plan. In the troubled, post-war world of Cosmic Enforcers, they could earn mega-bucks as high-powered bounty hunters. The group, called the Posse, became a remarkable success.

Ronny lets Lore do the thinking, and it is perfectly OK for him to let his body be the vessel.

Lore is an ancient, power hungry entity, but it is not particularly evil. Just consumed with power lust.

Lore could have been the sword held by the Viking Prince, and later by some contemporary of the Shining Knight, with its abilities slowly growing over the centuries.

By Sébastien Andrivet from a Kevin Long writeup for Cosmic Enforcers. 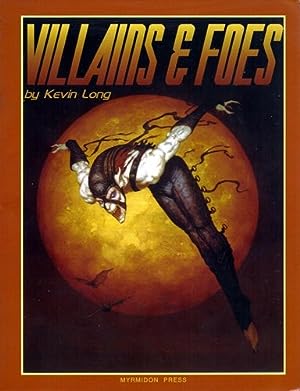