This profile is 100.4% intended to be read right after our Luc Orient character profile, wherein everything gets explained.

Lora Jordan is a lab technician and a nurse. She’s also in excellent shape and health.

Though she’s perpetually underestimated, she has a mean throwing arm. Lora once disarmed a man at ten paces using a thrown IBM Selectric  (and the element of surprise). She also once delivered a surprise atemi to the back of the neck, knocking out a robust man.

But generally she just stands there and does nothing whatsoever. Because she’s a *girl*, see ?

Professor Kala is a four-colour  genius. He is a master of SCIENCE! (all of it), engineering (most of it), observation and reasoning. His theories and his deduction are almost always correct, and his ability to understand alien tech seems superhuman. He can build equipment more advanced than what is normally found on Earth.

He keeps himself in good shape. Kala usually smokes a pipe, and wears tinted glasses.

Professor Kala is famous and respected. His sterling reputation opens many doors, and Belgian (European ?) officials will normally collaborate with him. After all, to hinder Hugo Kala is to ensnare Progress™ itself. And maybe the most internationally admired Belgian.

Toba seems to be a professional international guide. He clearly knows a lot about expeditions in various sorts of wilderness, and about dealing with low-tech and/or isolated communities such as jungle tribes. He also seems to have a talent for languages.

As a young outdoorsman, he’s in excellent shape. He’s also adept with an unusual variety of weapons.

These gadgets aren’t in constant use. They tend to be mission-specific, and only deployed when necessary.

Early on it seems that they’re going to be a recurrent feature of the stories.  But in practice, they’re seldom seen in the tales covered in these writeups. This is even though Kala gains some access to alien tech and materials.

In practice, the adventures aren’t equipment-centric. And what does get used is usually procured on-site.

I’m not sure how Kala manages to pack such a range of medical supplies within this small attaché-case.

As long as we’re into logistics, he also has a superhuman ability to retain his glasses and pipe in any circumstances.

This looks like a broad, flat metallic bracer with a sort of small remote on top. It can deliver a powerful but short-range energy beam. During this era, it gets used but once and is never seen again despite being so obviously useful.

This had at least a Geiger counter, but it likely had a bunch of other sensors with advanced miniaturisation. It looks like a shock bracer above, and the same remarks apply.

These are old stories based on even older archetypes. So early on Lora is simply The Girl™. She’s dutiful, doesn’t like conflict (or even when Luc makes friendly fun of her), is a serious caretaker, likes flowers, housekeeping, babies and dressing up, is traditionally feminine, etc..

Lora shares all Hugo’s scientific ideals. One gets the faint impression that she was one of his students before she graduated and went on to work for him.

In most situations, Jordan doesn’t talk much. Since there are *men* talking. But when things aren’t tense or scary, she’ll demonstrate a good sense of humour. She’s also fond of making discreet fun of Luc for being so brash.

She smokes socially, usually with a cigarette holder.

Lora and Luc have the body language of lovers (but not outright PDAs). Yet nothing is ever stated about that, and there are no romantic elements in the stories. This is presumably a genre convention – these stories were a 1960s/1970s equivalent of shōnen comics.

Or maybe there’s not lovers at all, and Orient simply feels entitled to paw Jordan. That wasn’t infrequent back then.

On Térango, Lora became a good friend of a dissident lass named Granya. 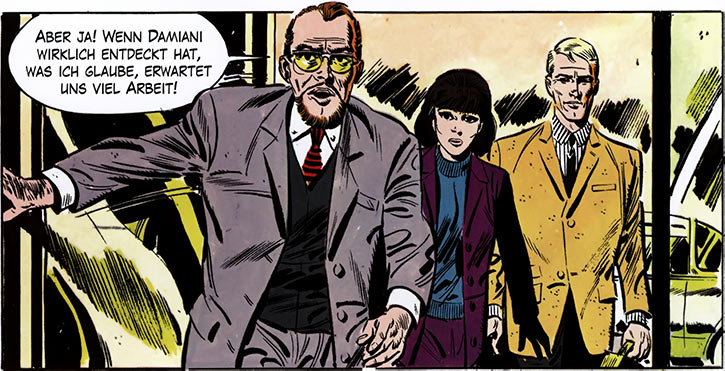 Curiously, Lora’s hair is much darker in the German language release of the first graphic novel.

Beyond being super-brilliant, Kala is a relentless humanist and scientific positivist. He deeply believes in progress, in peace, in understanding and in the betterment of humanity. Upon first contact with space aliens, he had a strong stance of assuming benign and peaceful intents on all sides.

Even before first contact, Kala was convinced that aliens existed. Of course, it may be that there were previous contacts that he knows of, but can’t mention even to Luc and Lora.

As a good comic book scientist, Professor Kala can become consumed by his current research project. In such a state he becomes downright brusque, and is best left alone. Generally, his people skills become so-so when he’s too focused. Otherwise, while he clearly tends to be authoritative, he *does* listen to others.

Toba is serious, wary and responsible. He takes care of all sorts of logistics and other details-oriented matters that must be done right. Like the rest he’s a good guy.

He *always* wears his white turban.

Early on Toba addresses his clients as “Orient-san” and “Kala-san”. Perhaps he was on a japanophile kick back then, or his previous long-term clients were Japanese. Toba eventually switches to “sahib”. He occasionally makes reference to Vishnu, and seems to be Hindu.

Toba seems to have become a permanent Eurocrystal One employee.

“Ooooh, orchids ! These look marvellous ! I’m pretty sure some of these aren’t catalogued species. If only Kala were a botanist.”

“Oh no, I’m coming with you. Trust me, you’ll be happy to have a nurse along as soon as you get some itsy-bitsy thorn stuck into your foot.”

(As Orient unexpectedly returns with an alien crew) “Yes, that’s the sort of things you should expect if you’re foolish enough to let this man go out to buy cigarettes.”

“Look, Mr. Dr. Hugo Kala, if this is yet another case where in the name of science we are meant to dive into poisonous craters, or to play cops-and-robbers with space aliens or madmen…”

(Barging into a hospital, to flabbergasted doctors) “It’s a medical emergency ! Don’t waste time asking stupid questions and just follow my orders ! Lora ! My emergency kit ! It may not be too late… Lora, the red ampoules ! IV !”

“The greatest scientists on this planet would give their right hand to study these ‘whatsits’, as you call them… This is fantastic ! Fantastic, Luc !”

“This seems scientifically impossible. And yet, if it were false, we’d already have collapsed from radiation poisoning !”

“Precisely. This is where you abutt against the heart of the problem, Luc. Yet there is one, just one theory that can explain it all. The visitors from the three suns have breached through the barriers of time itself.”

“The differences are obvious, true. The colour of their skin, for instance. See what causes this ? They lack any sort of circulatory system. There is some sort of energy that functions much as blood does for us. But otherwise they are strikingly similar to our physiologies. Their energy centers seem to have been artificially frozen…”

“I see youths from two worlds acting like friends warms my heart, Thar-Ojec. No doubt a day will come where the beneficent forces of the mind shall unite all peoples across the barriers of time, space and races.”

“On Earth, well-armed and well-equipped explorers have often had to retreat in primeval forests. Yet they were merely faced by naked savages shooting silly little darts at them using bamboo blowpipes. Well, here on Térangos, we will be those savages.”

“Kala-san was about to say too much. Perhaps Rowney-san is indeed trustworthy, or perhaps he is not. So it’s better not to take risks.”

Luc: “I must have fallen asleep. With this silence…”
Toba: “Silence, precisely. This is not normal.”

(As Toba just saved Luc’s life by killing an opponent Orient was reluctant to gun down) “I learned to fight in the jungle, sahib Luc. I was taught to never pity a tiger about to pounce.”

Bonuses and Limitations:
Martial Artist can only be used in Blindside situations, but it can then apply to thrown objects as well as to melee attacks.

Drawbacks:
An equivalent of Age (Young) due to her gender and the times.

Advantages:
Expertise (Wilderness expedition management), Languages (And a lot of them, though they are never specified – plus the same languages as the others), Life support (Thin atmosphere, toxic atmosphere).

Drawbacks:
None demonstrated. People will tend to consider him a servant, but that can have advantages. 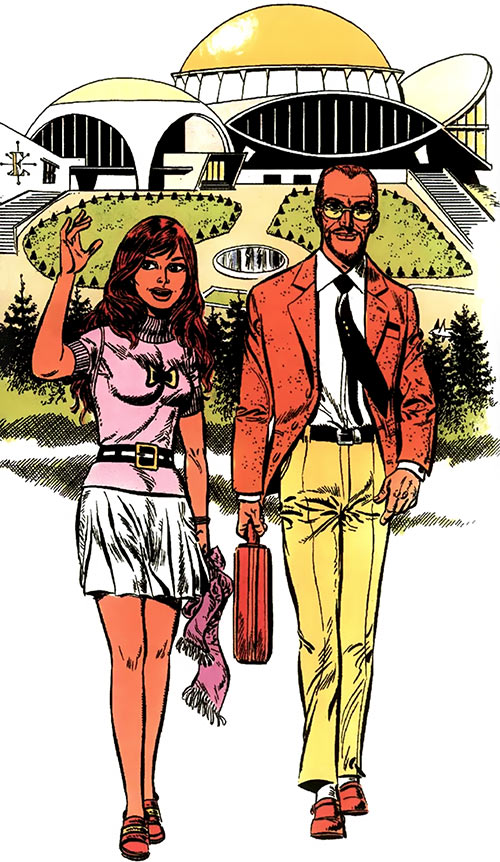 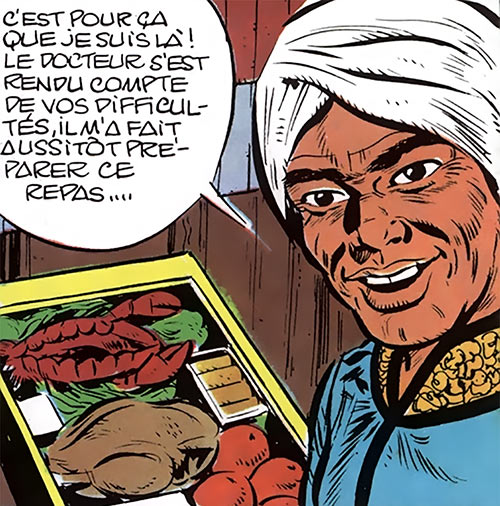 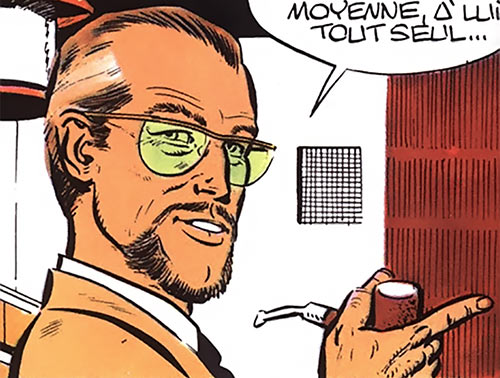 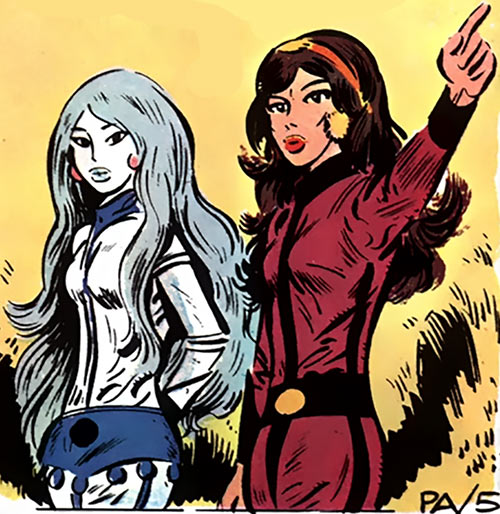