Juan Aguacate a.k.a. El Luchador (“the wrestler”) is the hero of 2013 side-scrolling brawler video game Guacamelee.

This two-fisted super-hero operates in a Mexican-themed world best by evil supernatural forces, to be defeated by flamboyant masked wrestlers.

As I see it, there can never be enough magical Mexican-inspired wrestling warriors! Plus, the game is actually very fun, if sometimes rather challenging, and set in a poor, rural Mexican setting as culturally envisioned by the western world with appropriate music!

However, this profile will include a lot of S P O I L E R S !

El Luchador is a powerful wrestling-inspired mystic warrior of great strength, durability and endurance. He is powerful enough to regularly combat even major demons and emerge victorious.

He regularly employs numerous complex fighting moves, throws and stunts to confuse and defeat his enemies. He can now break stone with his bare hands, travel between dimensions and much more (see below). 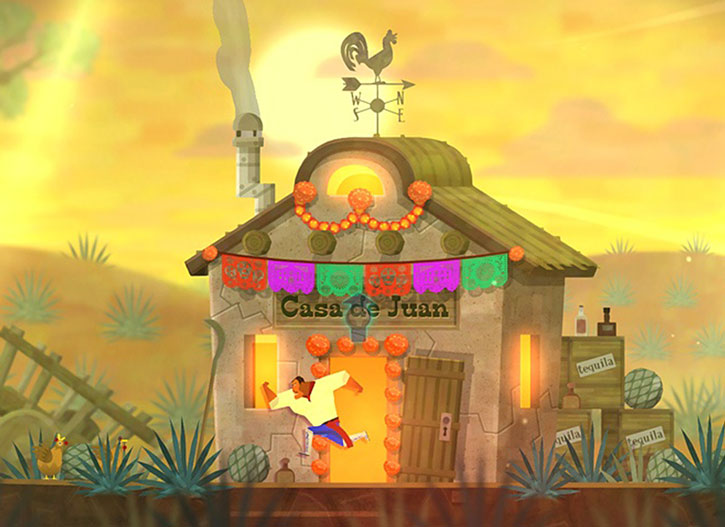 El Luchador is capable of performing amazing wrestling- and acrobatics-inspired feats. This includes fictional stuff like running vertically along walls or just grabbing on even to flat walls, high speed jumps and gliding indefinitely through the air.

The wrestler also knows numerous cinematically fancy combat moves including crushing blows, headbutts, uppercuts and throwing opponents. Through mystical means he can also assume the form of a super-chicken at will or just change costumes on the spot.

The launch trailer shows the visual and audial style of the game.

Dark mirror of the living

The netherworld, i.e. the world of the dead, is a bleak copy of the world of the living. It comes complete with most buildings and architecture and a black radiant sphere for the sun, but naturally not the inhabitants. In DC Heroes terms it has a Travel Value of 02.

The small differences can be exploited in various ways by a dimension traveler. For example, when a door is locked in the mortal world it may actually be unlocked in the world of the dead or vice versa. On the other hand, certain buildings do not exist at all on the other plane.

Traveling between the dimensions naturally also has the possible benefit of escaping superior enemies. Furthermore, it can be used to traverse difficult terrain by jumping along objects existing only in one of the two dimensions and then switching back to continue on an original path. Some areas even seem to be created to be traversable only by travelers capable of hopping between the two dimensions. 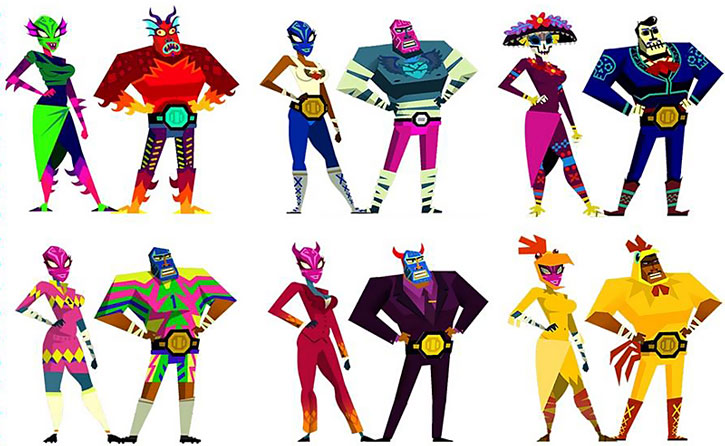 All this suggests that the two dimensions were once upon a time created identical – possibly from the memories of the recently deceased. But they have since been altered by the respective dimension’s inhabitants (and monsters).

The world of the dead now often contains ruins and has less light than the living world. However, statues and such are often mystically lit in the dead world in an ominous and rather beautiful way.

The populations in the world are different. Inhabitants in the dead world appear to continue their existence in an area that is a copy of where they used to live while alive. This suggests that they cross over there upon their death. People in the living world of course cannot yet be found in the dead world, while their older, dead relatives can be.

Wrestling with these realities

El Luchador effortlessly travels between the worlds. This is usually done to traverse difficult terrains, but also to combat interdimensional opponents (wraiths in the living world). During his adventures he has become a natural inhabitant in both the dimensions of the living and the dead. 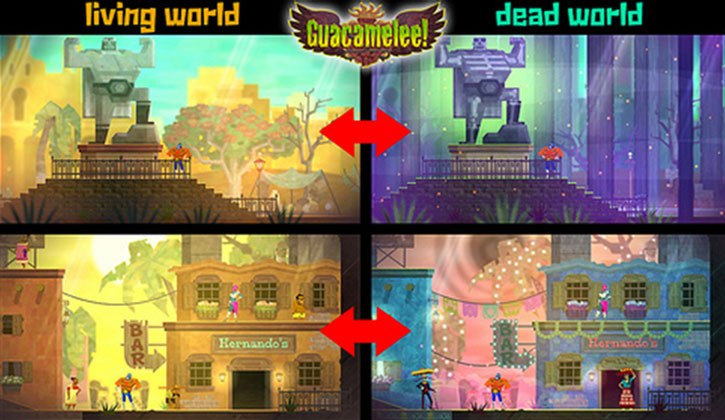 The world of the dead is home to El Luchador’s nemesis Carlos Calaca. Mr. Calaca used to be a normal man until he sold his soul to the Devil in exchange for healing his arm so he could win a great horse competition. He, however, was tricked by this devil and he was snatched down to Hell immediately upon winning.

Carlos did not have time to enjoy his victory at all. Which is why he now seeks revenge as a demonic, undead being.

Carlos managed to turn the devil into a chicken through mystical means – which he later also did to El Luchador. He then proceeded with his ritualistic plan to conquer both the lands of the dead and the lands of the living. Only El Luchador stands in his way!

I’m the only man you wouldn’t want to wrestle… If I was in shape.

Juan Aguacate used to live a poor rural life in the Agave Field, outside of the Mexican town of Pueblolucho. The peace ended when one day El Presidente’s daughter was kidnapped by an evil charro skeleton named Carlos Calaca.

Juan, who had been in love with the daughter, went searching for her. As a result, he encountered the demon and his cohorts. Sr. Aguacate was readily killed and banished to the afterlife of the dead.

However, there Juan met a mysterious luchador calling herself Tostada. The wrestler offered him a chance for revenge and justice by giving him a magical luchador mask. The cowl restored Juan back to life in the form of a powerful empty-hand warrior – referred to here as El Luchador. It also sent him back to the land of the living.

Win if you can, lose if you must, but always cheat!

During these adventures El Luchador also met a monk named Uay Chivo. The man of the cloth was capable of changing into a goat. He taught El Luchador numerous and new powerful wrestling and fighting moves and mystical abilities whenever they met across the lands. Chivo taught him moves whenever El Luchador destroyed one of his Choozo statues.

Rising in power and experience, El Luchador continued tracking Carlos. He met his cohorts X’tabay, Flame Face and Jaguar Javier and defeated them all. 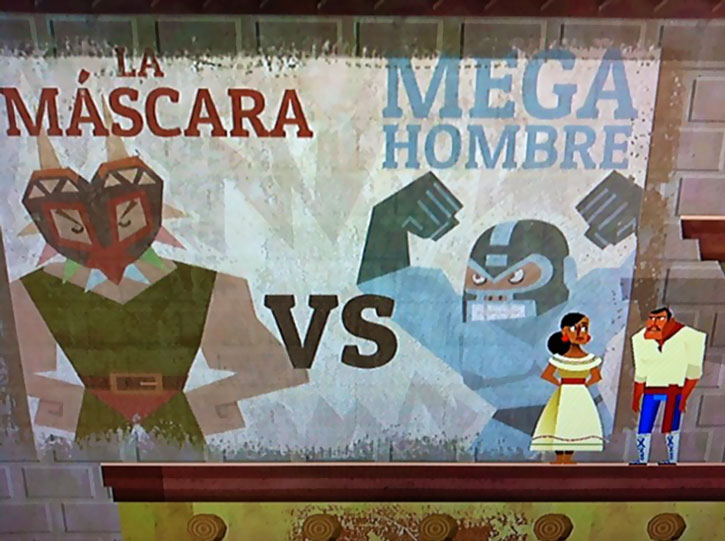 Travel through difficult areas, earlier having partly been facilitated only by mystical teleportation using a system of old Olmec head statues, was eventually made easier still. Now El Luchador had dimension travel abilities and the capabilities of superior climbing, running on walls and dashing through the air.

El Luchador also became a hero of the lands of the living. He helped out with various tasks such as:

He even befriends some folks in the dead lands by doing them some services.

In the end, El Luchador managed to track down the very powerful Carlos Calaca. He faced Calaca in the heavens, eventually defeating him! In the aftermath, Hell was in quite some disorder. The Devil had been ousted and Carlos had taken control.

However, El Luchador did help fix up the situation by himself traveling to El Infierno. There, he completed several challenges to reposit the Devil back into his office. The Devil would then proceed to control Hell and restore balance to the forces that Carlos had almost unmade. 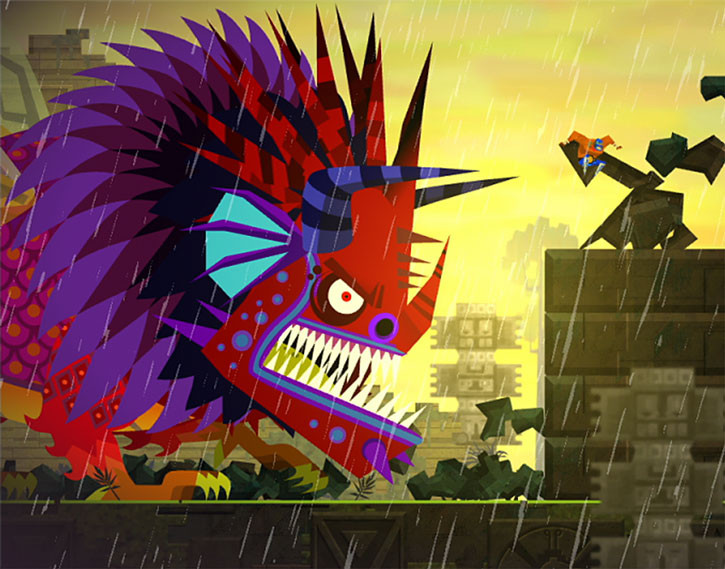 In the end El Luchador ends up a major celebrity in the countryside. But what about El Luchador and El Presidente’s daughter? Well, dear reader, there is one ordinary ending and, if El Luchador has reeeally worked for it, one alternative ending.

But these you’ll have to find out for yourself by completing this game, after which you’ll want to find another game as cheap, fun and good as this one to complete!

El Luchador possesses superior physique, strength and endurance. His upper body is tattooed and excessively muscular and his face is covered by his magical Luchador wrestling mask.

While his chest is bare he wears a pair of trousers and boots in typical Luchador style. At times, he has also been seen in other Luchador-inspired costumes, always wearing the same mask.

Juan, while alive, appears to have been a very poor, but honest and honorable man. After his death, he returned in supercharged form. He apparently had all his mental faculties and personality traits boosted to the max. 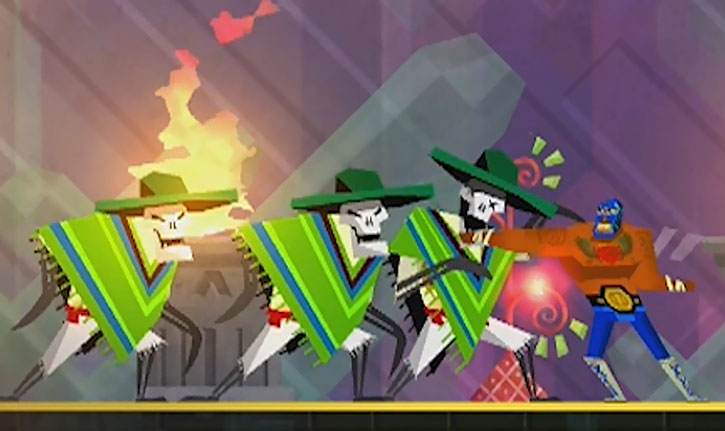 As El Luchador Juan is helpful towards the common man, but crushing against enemies. He possesses a steely resolve in his pursuit of justice and revenge. He’s all about his quest to liberate his beloved, El Presidente’s daughter. Juan obviously loves her more than life itself.

Completely unafraid he takes on tasks and challenges that would be considered impossible by the common man. And he faces enemies without fear and puts them down with an attitude using his considerable fighting skills and abilities. Evil demon, would you fancy a knuckle sandwich?

He almost never says anything being a silent, tough guy.

The legendary El Luchador and his story would have been the historical inspiration for the later Mexican rural hero called El Diablo. He was likely a contemporary of the various heroes of the Wild West. They may have met him, surprised at his might and amazing stories they hear about him, during adventures down south.

Actually, considering his practically undead origin it’s possible that he won’t age as long as he keeps the mask on. Which means that he may still be around in some corner of the DC Universe, now perhaps as the new guardian of the mask awaiting his successor.

El Luchador (at the end of the game)

Equipment:
Blue Luchador Mask [BODY 14, Notes: the mask may be the source of his powers, in which case he has a Loss Vulnerability to all superhuman Attributes, Skills and Powers for losing it. It’s also possible that the mask grants the wearer an age-retarding advantage.].

Bonuses and Limitations:
Shrinking is Always On (-1) and Already Calculated into stats.

A user with this odd Schtick may use his/her Dimension Travel power to travel back and forth between two dimensions of his choice several times in one single phase by the expenditure of only one single Dice Action.

Actually APs of the Dimension Travel Power minus the Travel value and the sum divided by two numbers constitutes the total number of hops available in one Phase. In other words, this is a greatly discounted sort of multi-attack, and the effect of this has some unusual if minor benefits:

In order to prevent abusing this Schtick the GM may declare that every use in a combat scene costs 1 HP. 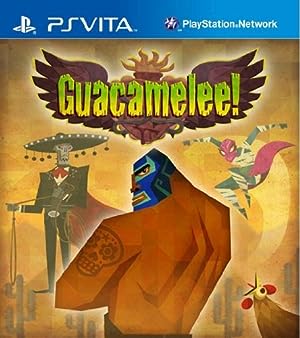 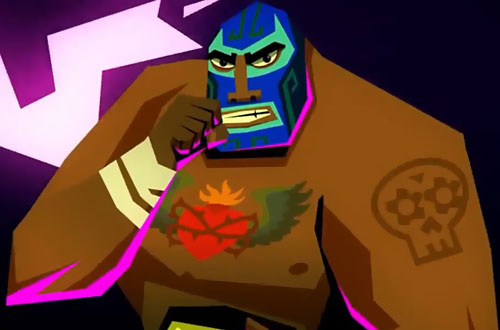 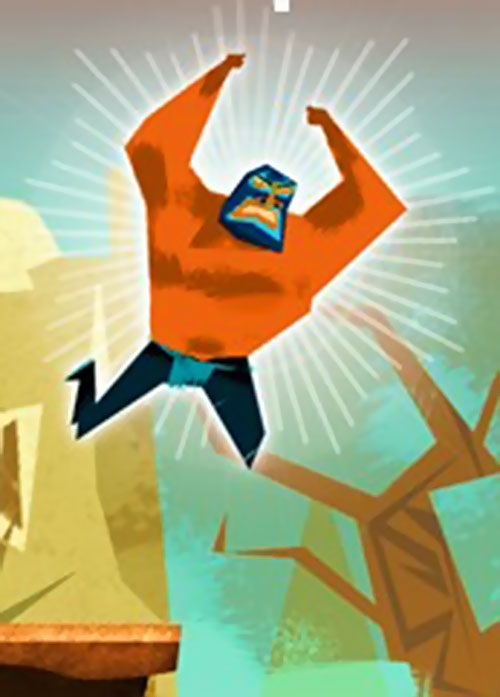 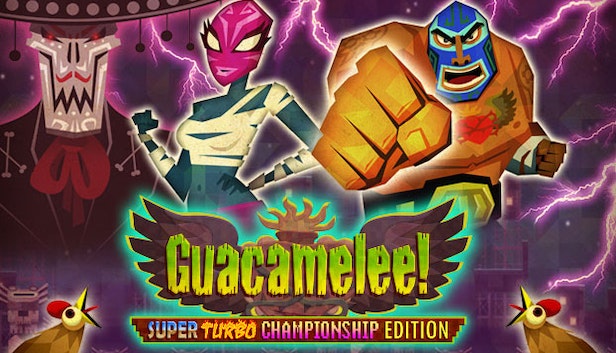 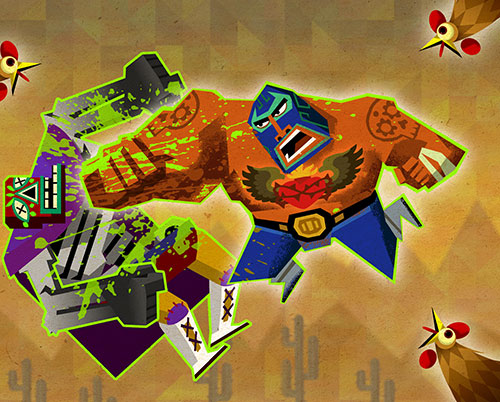 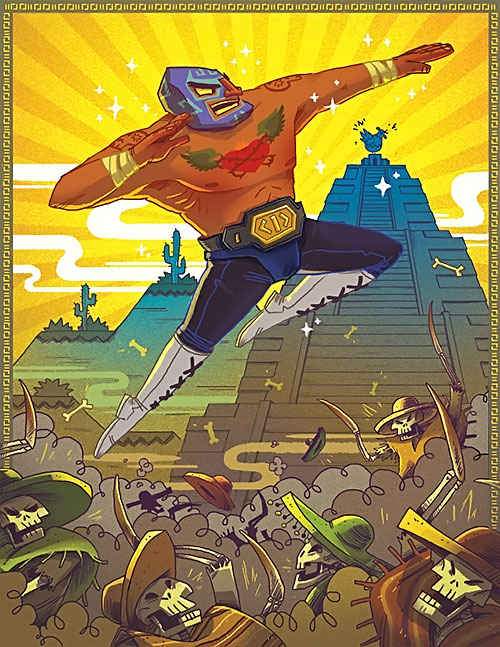