From his MP days he’s particularly good with taking out armed targets without killing them. For instance, by forcing them to empty their weapon into a wall or the ground using an arm lock.

He’s not particularly lucky. But given how many situations he’s survived, he can’t be called unlucky either.

The earliest known bit on Luis Circo’s resume is service with the US Army’s Military Police Special Response Team. These are military SWAT teams charged with neutralising exceptionally violent cases involving armed, trained military personnel. Up to and including SOCOM troops who flipped out.

Cisco proved so adept at taking down crazed Green Berets that he graduated to I.O. and became a Black Razor. He then joined Santini’s personal Black Razor team, a unit that proved able to engage the WildCATs. He was still under Santini’s command when the Black Razors were involved in Project : ENTRY.

Project : ENTRY was an attempt to have a “door” technology similar to the teleportation door of the Authority’s carrier. A door was successfully opened to another dimension . Half the Black Razor stepped through for recon and science work. When they didn’t come back, Santini and the remaining half of the team went in.

What they didn’t know was that project : ENTRY was being sabotaged by I.O. senior executive Ivana Baiul. Her goal was to get rid of Santini.

Only three members of the fearsome Black Razors miraculously emerged alive from Project : ENTRY. These were Santini, Blake Coleman and Luis Cisco. The team was dissolved.

Cisco signed for a new tour of duty with the US Army. But he ended up in an incredibly boring unit where nothing happened. Most of his colleagues were hostile given his past as an elite operator and his aggravating success with women.

Although they were happy when they could use his formidable skills as a MP on the base, they couldn’t stand his maverick, “I’m better than you anyway, péons” attitude.

When StormWatch was formed, Santini checked if he could have Luis Cisco transferred to his unit. When, three weeks before the team’s official debut, the UN was attacked by heavy forces, he called markers and had Cisco transferred to the UN *right now*. Santini used teleportation technology from Project: ENTRY to gate Cisco in.

The new StormWatch’s Team Achilles’ missions proved extremely difficult, and Cisco wasn’t lucky. In the first few hours, during the assault on the UN, he was badly eviscerated by a posthuman terrorist.

Lt.-Col. Grunier patched him up. But she warned Santini that Cisco was getting anger management problems – being full of rage at having been so casually cut open.

Santini didn’t heed her advice. During the next operation, in Chechnya, Cisco flipped out. He shot an SPB member of the same terrorist network point-blank while she was stunned – murdering her in front of the furious Coleman.

At this point Grunier made it clear Cisco should retire. After some discussion with Santini he decided to finally tie the knot with one Martha. However, bad luck struck again and, mere hours before the ceremony, a major alert was received.

During the subsequent assault Cisco, who was on point, was shot in the face. Thankfully, the bullet only knocked out teeth and flesh, but Cisco had to be evacuated on the spot. Between his wound and his marriage, he left Team Achilles.

His current activities are unknown – he might be back in the military with a desk job thank to Santini-pulled strings.

Cisco is a cocky Latino, and a fervent womanizer. He was famous for his ability to juggle an impressive number of lovers without them ever meeting one another. He also can’t resist the urge to make passes at women and/or ogle at them in the most improbable situations – though he always comes across as light-hearted and with roguish charm, rather than creepy.

His cool, seductive, highly competent rogue act may have been weakened by the troubles he encountered in Team Achilles. But since he managed to bounce back from the horrors of Project: ENTRY, he may be able to recover at some point and be back in the field with some crack unit looking for experienced shock troops.

He tends to employ common Spanish words in his speech. Apparently, it’s mostly a matter of style for him.

“Man. Santini, jefe, you shoulda called me weeks ago. I’d clean your pool for a living if it meant getting out of this chickenshit outfit.”

(Shoving a machinegun in the face of a stunned SPB) “Hola, amiga. Where’s your smokey little girlfriend ? You know, the misty one who stuck her claws in my stomach and tore my guts out ?”

Flint, meeting Team Achilles : “This looks like the place. Where’s your commanding officer ?”
Cisco, rubbernecking to check out Flint’s derrière : “Dunno. Maybe around back.”

Note:
StormWatch personnel are placed outside their normal chain of command. While on StormWatch duty their Rank Advantage becomes a 0-pts flavour advantage. Rank more or less applies *within* Team Achilles rank, but this is quite looser than in most military units. 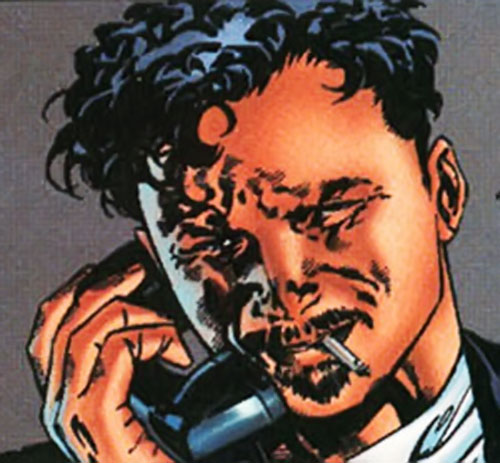 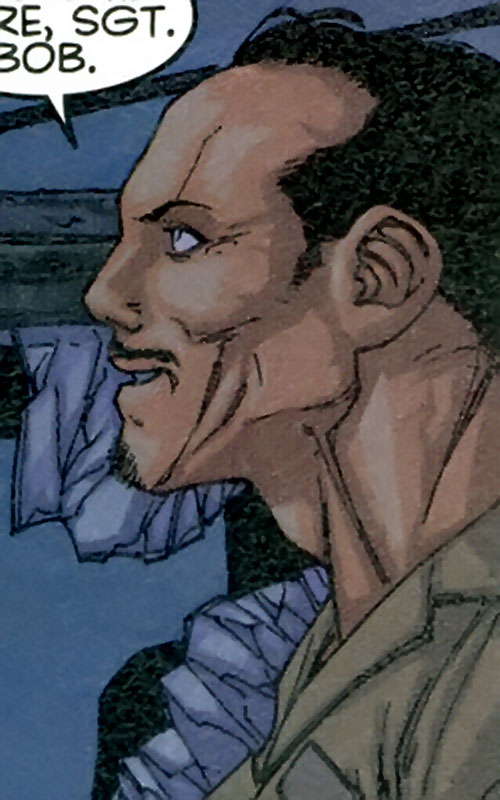