It’s a pretty old profile and I’m not happy about it. But reaching a point where it can be replaced because the more modern, better Cage articles have progressed far enough is gonna take… a while.

After his exposure to the Power Man virus, Cage’s gotten even stronger and can now be considered a contender among bricks. He still has his trademark steel-hard skin, his exceptional abilities at brawling and general adventuring, and his attitude hasn’t gotten any better. His streetwise skills are also sharper than ever.

(This assumes that this version of Cage’s biography was broadly similar to that of Earth-616  Cage unless demonstrated otherwise.)

The man who would become Cage grew up in the Harlem slums. He and his buddy Willis Stryker were a pair of feared street fighters. Their pathes split in their late teenage years – “Cage” attempted to go legit and to hold menial jobs, while Stryker became a dyed-in-the-wool criminal.

They still saw each other, but a severe disagreement over the attentions of one Reva Connors had the jealous Stryker plant cocaine at “Cage’s” place and call the cops. Reva was killed shortly after in a mob hit aimed at Stryker.

Cage, simmering with rage over this treason and Connors’ death, was considered a mad dog in prison. A mad dog built like a Mack truck, able to knock down four or five convicts in a brawl. Thus, he was sent to a higher-security prison called Seagate.

There, two racist officers regularly made his life even more miserable. However, there was a change in wardens, and the new one was more enlightened – both officers were harshly disciplined.

Cage’s big break came when doctor Noah Berstein, working on a Stark International grant, received an agreement to make deals with prisoners. They could get sentence reduction in exchange for allowing medical experiments to be performed on them.

Berstein and Cage became friends, and decided Cage would submit himself to the experiment. Afterwards, Berstein could pressure the warden into having the basically innocent Cage released for health reasons.

However, during the experiment, one of the racist officers attempted to gain revenge on Cage. He replaced the guard, and started messing with the controls of the experimental machines at random, hoping to kill Cage.

Instead, he gave Cage vast superhuman powers. The confused Cage seized the opportunity to escape – by punching through prisons walls. He was reported dead in his escape, but his steel-hard skin saved him.

That’s how you spell “New York”

Cage drifted back to New York City, obsessed with getting revenge on Stryker. When passing near a high society event, he was in position to derail an attempted stick-up using his powers. After the incident, the organizer of the event discreetly slipped him a wad of cash, and Cage realized he could actually make a living out of this.

Thus, he invented the “Luke Cage” moniker (which later become his legal name), bought an escapologist costume, and had business cards advertising his services as a “hero for hire”. He even started enacting some street justice in order to gain publicity, beating up dealers and pimps.

He ultimately connected with Stryker (now called Diamondback), beat him to a pulp, and started investing in his Hero for Hire business. In order to gain more publicity, he fought Power Man I in order to gain the “right” to christen himself Power Man II, a more spectacular name.

The Hero for Hire business further developed when he met Iron Fist and the Nightwing Restorations agency. That happened during the case that would allow him to exonerate himself from the drug dealing charges that had led to his imprisonment. Power Man and Iron Fist, with the help of Jerwyn Hogarth, Cage’s lawyer, became the best-known incarnation of the Heroes for Hire.

While it would be hard for two men to be more different, they were bonded by a strong friendship. Thus was the main reason for their success.

The Heroes for Hire operated for a few years, but during a strange case Iron Fist was supposedly killed – and Cage framed for the murder. He went into hiding in Chicago and, when the charges were dropped, set up shop in the Windy City.

However, he was looking for something more, and signed up a deal with a lousy tabloid called the Chicago Spectator. The Spectator was bankrolling him in exchange for an exclusive on the tale of Cage’s mercenary adventures. They also put him in touch with ace private detective Dakota North.

Of course, they weren’t disappointed, as Cage went on doing what he does best – getting in, and out of, trouble.

Back to the city of no illusions

His rep slowly growing, Cage has started working again as a Hero for Hire. For some time he and Iron Fist had the backing of Prince Namor via his corporation, Oracle, and he worked along with other hired super-heroes.

This eventually came to an end, and Cage was back working the streets of New York as a freelance problem solver, occasionally working along with Iron Fist. He also often worked as a bodyguard for the Nelson & Murdock law firm, often alongside occasional lover Jessica Jones.

More recently, Cage’s long time relationship with ex-superheroine Jess Jones has solidified and they are expecting a child. The couple has rather interesting occupations, with Jess being a special consultant for the Daily Bugle’s “The Pulse” section, and Cage joining the New Avengers.

Cage is a huge, massive, ripped Black guy – an obvious bodybuilder. In the 1970s and 1980s he sported his unforgettable disco fever costume. In the 90s his costume was an indestructible leather jacket, gray jeans, a red T-shirt and extra-heavy work boots.

This specific version of Cage wears a pair of reddish shades, a woollie bunnet, bubble vest, baggy jeans, timbs, golden chains and a walkman with large headphones. The chains bear a large nameplate with the word “CAGE” on them.

He looks calmer and more in control now than he previously did. Instead of anger, he tends to project an iceman, cool, in control persona. If he gets angry, though, the old Power Man head-busting attitude is still there.

Ex-cons tend to recognize Cage has a fellow ex-con.

This Cage is a modern take on the Shaft archetype, but… bigger. He’s a massive, badass, intimidating pro who’s been in the business for years. He comes complete with macho confidence, fierce stubbornness and hardcore attitude.

Cage insists that he only works for a fat check and that he’s a stone-cold professional.

In actuality he cares a lot – especially about the underclass, and especially about impoverished persons of colour. He’s forever helping poor people who can’t really pay him, for a pittance. He will almost always oppose factions who would threaten well-meaning people in working class neighborhoods.

While he may simply turn down pleas, saying that shit happens and pretending he’s not interested, he just cannot leave to rot poor underdogs who obviously need help.

This Cage also portrays himself a player interested in shallow luxury, street cred and easy ladies. In actuality, he shows genuine respect for the women he’s involved with and has a sense of decency most folks wouldn’t expect from an ex-con.

His manly, smooth way around women has earned him a not-undeserved reputation as a skirt-chaser, including many rumoured flings with super-heroines.

The older Cage acts like a cool, smart, collected, laconic mercenary. He has a deep understanding of street and criminal culture, and is very at ease in those quite dangerous power dynamics. His simple presence and formidable physical power make it very obvious nobody is going to diss him, and he projects an air of quiet, tight-lipped competence.

Although he still enjoys charging it and bashing down walls and opponents, he has no problem being deviously manipulative if that will solve a situation. He can handle even Jess Jones’ sometimes difficult temper in a direct, calm, honest way.

Cage has a seldom seen vain streak that can get pretty wide after he changes his looks. If he’s proud of his new looks he’ll tend to look at mirrors an awful lot for a week or two. His pride about his ripped physique is always a bit present, especially if a woman compliment him on it.

Lastly, he still has occasional bouts of bluesy mood about Reva Connors, and keeps an old photo of her in his wallet. This has considerably receded since he’s been with Jones, although Cage now demonstrates a hair-trigger temper if something threatens his family.

“Who’s gonna fuck with me ? I’m the scariest nigga ever was !”

(Cage ruminating on doing yet one more quasi-freebie) “Understan’, gigs like this — low payin’ ones — I don’t touch. I mean, charity may begin at home, but come the first of the month – your uncharitable landlord’ll make it damn clear whose home it really is. s’why I got but one rule : pay me what I say is necessary to do the job or walk the fuck away. My terms, you get what you need, done. Everybody’s happy. For that dead lil girl, I was bendin’ the rule, an’ I wasn’t feelin’ happy about that at all. What I was feelin’ like, is one pissed off Negro.”

Cage’s “stare of doom” Schtick works as follow : if Cage gets five times full RAPs on an Intimidation attempt (say, 15 RAPs against a SPI 3 person), the GM is free to rule that Cage’s target fainted. This Schtick is mostly intended for colour – hence the GM’s ruling about the actual outcome.

The Detective (Legwork) Subskill is there if one uses house rules about Unskilled Character Interaction. 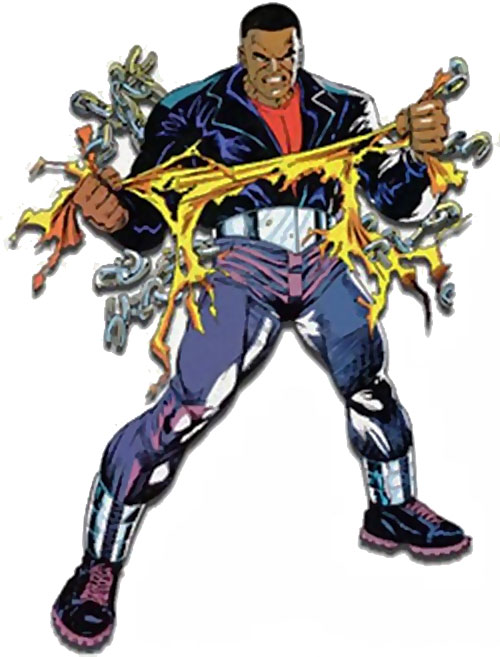 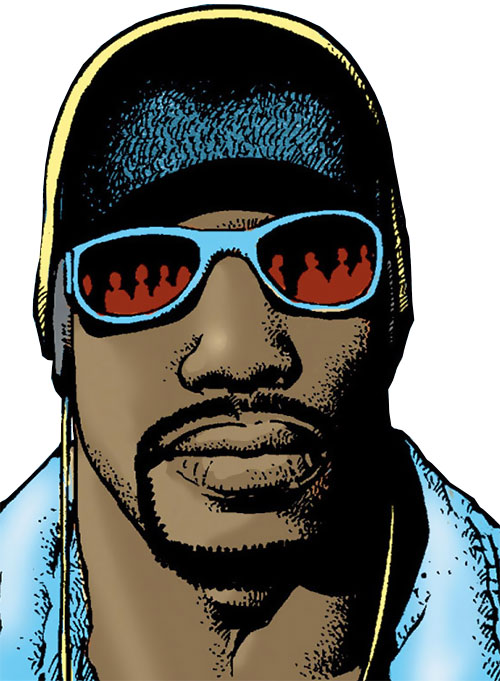 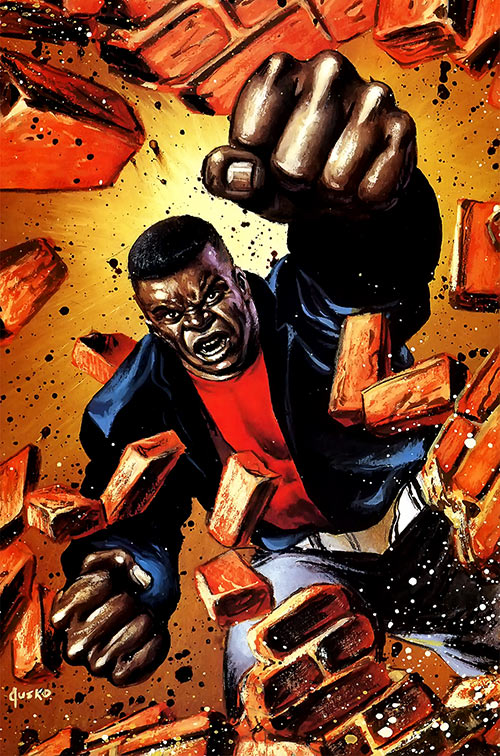 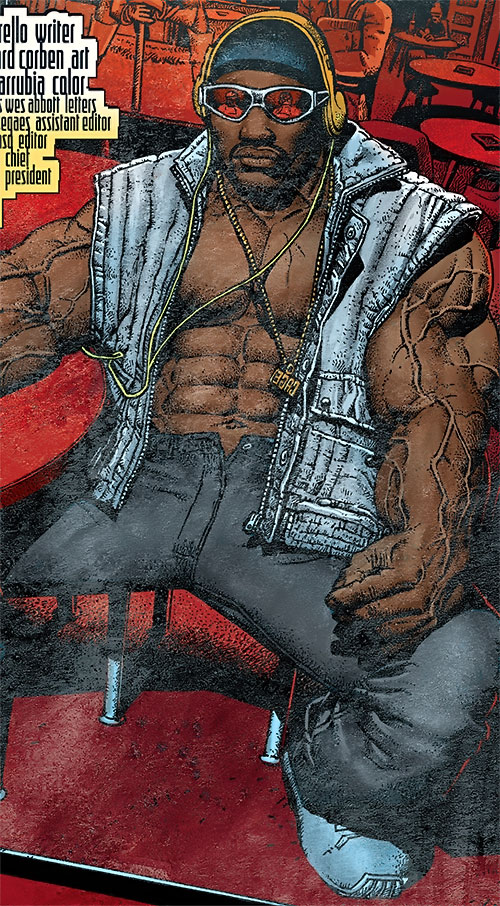 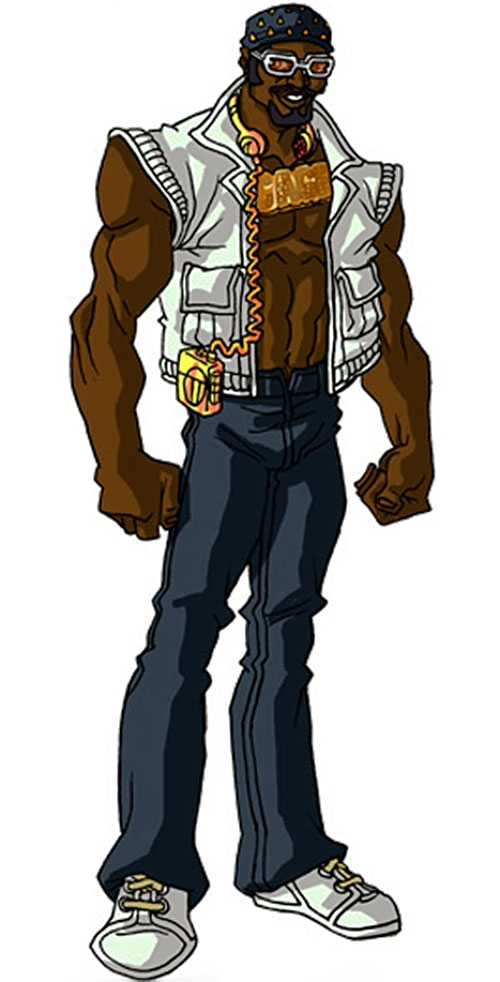