The Galaxy Knights were a running feature in early Mystery in Space comics. These Infantino/Kanigher stories started in 1951, and it shows.

It doesn’t get any campier than the Galaxy Knights. Golden Age comics can never be forgotten.

Lyle is the Galaxy Knight’s greatest law-enforcement officer. He’s, in fact, a regular superhero. Lyle is capable of flying a Fighter Rocket to its utmost potential and far beyond (see special section in the game stats)!

Lyle has been known to possess speed, agility, presence of mind and willingness to sacrifice his life above fellow officers.

He is a very capable combatant in zero g environments and when flying through space using his jetpack (his Zero G Combat Schtick).

“Central Navigation Station calling Galaxy Knights! Countless cosmic collisions have caused all space travel to be suspended! Solar listening posts have recorded conversations on several doomed ships which lead us to suspect that an outside force is responsible. Please respond.”
(Typical emergency call to the Galaxy Knights)

These space commandos of the 30th century answer every threat to the free peoples of the solar systems! Their exploits have protected the inhabitants of countless solar systems. The organization’s headquarters is referred to as the fighter station / planetoid Gala. It is located somewhere in the Sol System.

The organization is hierarchical and lead by a central council. Their standards are exceptionally high and few applicants pass all the tests. The few members are popular and have to be considered heroes. No Galaxy Knight ever turned traitor!

Titles such as Knight Commander, Knight / Commando etc. are used. They, including Lyle, regularly use a Fighter Rocket for transportation and for missions – which actually looks like a flying car with wings!

The Knights of the Galaxy are a legendary team of commandos living in the 30th Century. Their duty it is to battle various threats to the peace and security of the Earth and the many inhabited planets colonized by Earth or allied with it.

Little is known about the history of Earth. But it has been mentioned that the Statue of Liberty only existed up to around the 20th century. By the 25th Century, Earth had developed starships in which they have traveled to many distant star-systems. They have made contact with various alien races. Time travel is rare and beyond human technology levels.

The Knights of the Galaxy, based on the space station Gala, seem primarily made up of Earth people. But there are also aliens in the organization. The Knights are highly skilled starship pilots and adept in the use of various advanced weapons.

The ablest and best known of the Knights is Lyle. He has proven himself a hero on many missions. Lyle is romantically involved with Ora, the daughter of the leader of the Knights, Knight Commander Artho. Despite her youth, Ora became chief scientist for the Knights. After distinguishing herself on a mission, she became a Knight herself.

Crime still exists in the future. It takes many forms, such as:

A skewed version of the Knights appears in the 1990 mini-series Twilight, were they were cast as an opposing peace force to Tommy Tomorrow’s Planeteers.

Considering that the two teams existed in different centuries, this was decidedly out of character, and should probably be considered an Elseworld  story.

The members of the Galaxy Knight wear a uniform of blue trousers, an orange shirt, blue gloves, yellow boots, and a purple belt with a ray gun holster. There’s a jetpack or energy cells on the back and a circular, yellow symbol on the chest with a black, stylized bird (reminiscent of the Blackbird symbol), carried by crossed, yellow stripes.

They sometime wear a orange helmet with a white cloth underneath, reminiscent of French Foreign Legion headgear.

Lyle himself is fairly young, in excellent shape, has blue eyes and blond hair – a heroic image.

Lyle is a true idealist (see quotes) and heroic character. He’s a kind-hearted and somewhat naïve man with classic ideals. He really wants to prove himself worthy of being a Galaxy Knight, and does so with little trouble. He takes great care not to hurt innocents, but will not stop others from helping out even if it would expose them to great danger.

Like all the citizens of the future they will talk about technology, explaining every detail about its workings, as if it were completely new to them. Perhaps they are recovering from a great war and are appreciative, or everything actually is new to them. Bad spaceships, for example, are referred to as “rocketsters”.

Amazing feats come easy to him. Impossible longshots succeed only because he strongly and firmly believes that they will succeed – desperation breeds greatness!

His best friend was the Mercurian Millo. Without realizing it he is in a relationship with Ora, the daughter of his chief.

He is an excellent follower, fitting perfectly in the hierarchical system, and follows orders to a fault. There is little doubt that young Lyle would eventually rise to become the commander of the Galaxy Knights himself, and marry the chief’s daughter.

Knight Commander: “Lyle ! Your mission is to capture Cpt. Korvo, restore space travel and — and free my daughter ! I have the utmost confidence that you will succeed !”
Lyle: “Thank you, Commander! I’ll leave immediately !”
(Later) “I hereby report mission L241 completed with the capture of Korvo !”

“Great galaxies ! Is this an optical illusion ?”

“Lyle to Galaxy Knight Fighter Station — Ultimo’s Game of Doom is over forever — am on way home !”

(Defending his Mercurian friend Millo who may be a traitor) “Knights ! You have never questioned Millo’s courage or loyalty before ! To condemn him now without cause is to violate the very principles of democracy we are going to fight Mercury to protect ! We have sworn to protect the galaxy against attack from anyone ! If we deny Millo the chance to prove the sincerity of his oath, we have no faith in the very basis of which our organization was founded !”

The Galaxy Knights can be used as is in any campaign taking place between the times of Kamandi and the Legion of Super-Heroes. It might have grown out of the Earth-based, earlier Atomic Knights. Space Cabbie could also be active in the same time period.

Being among the galaxy’s greatest heroes, Lyle is apparently capable of bending the laws of physics to do impossible feats with his Fighter Rocket. It may not be a simple genre thing as only Lyle seems to be able to do the impossible.

This is modeled by his Bottomless Reserves Schtick, which he may only used with his Fighter Rocket or equivalent ship. Miracles are performed by spending HPs on any appropriate Power of the ship. Each such feat leaves him exhausted, which is common with heavy HP spending. Seemingly he gets back all spent HPs after saving planetary populations in nearly every adventure.

He has used its Magnetic Control power to control the motions of four moons, putting them back into orbit, and Energy Control to jettison a nuclear detonation into space and redirect it into a time machine! He has also used its Energy Blast to fuse the rings of Saturn solid, and its Flight power to fly to the other side of the galaxy in a few short hours! Science Fiction gets a new meaning !

Helper(s): Who’s Who: the Definitive Directory of the DC Universe #12. 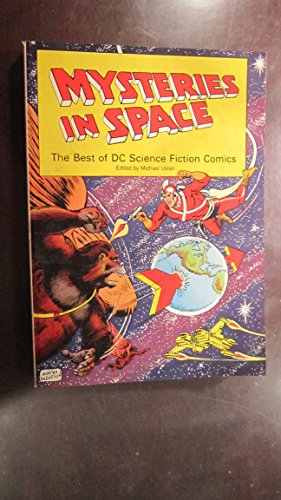 Mysteries in Space: The Best of DC Science Fiction Comics might reprint some of these, but we can’t check 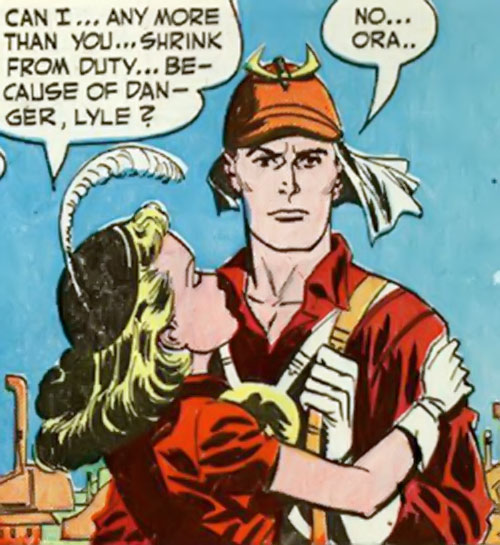 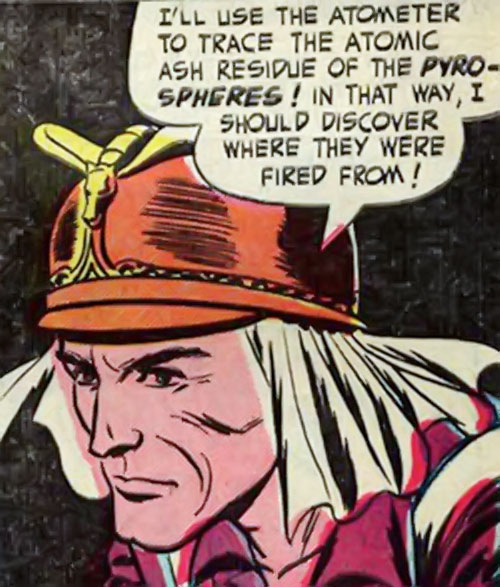 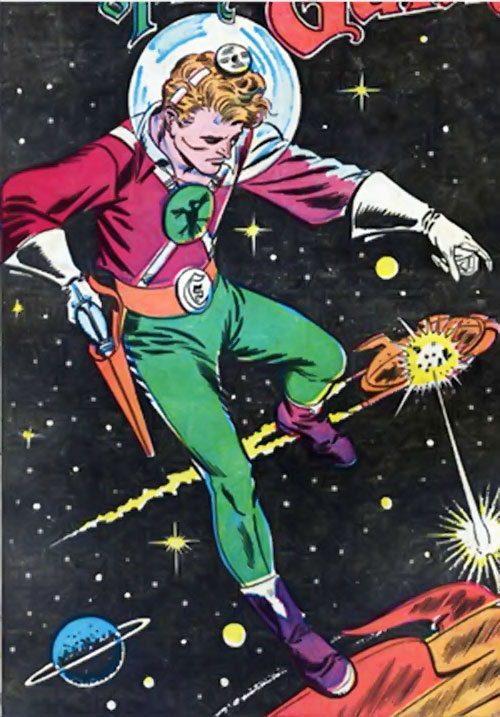 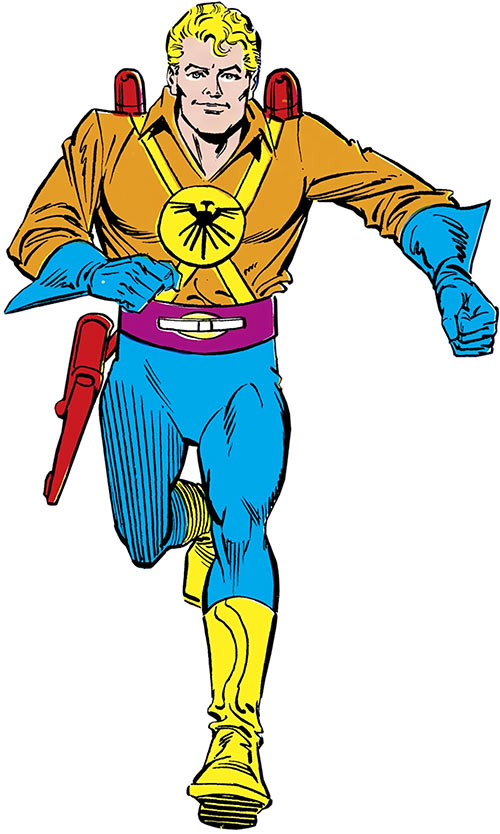 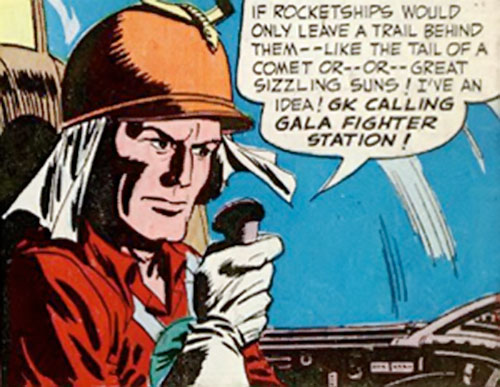 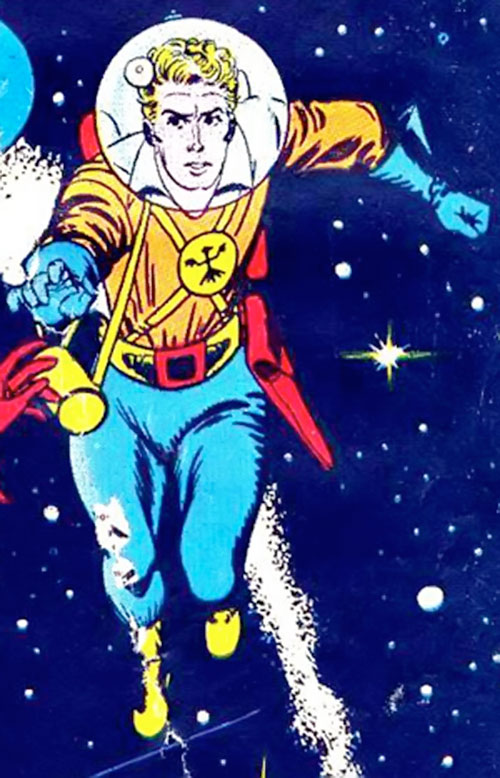