Lynx is a minor, obscure Charlton Comics character seen circa 1965.

Charlton was a B-to-C-list publisher, with a good part of their output being derivative. Frex, Lynx can be considered an equivalent of Catwoman in the Charlton Universe.

You can check our Sarge Steel character profile if you want more context about the books.

This profile is meant as an example of a typical, stock low-level 1960s villain.

Lynx is exceptionally beautiful and possesses superior intelligence. She is an expert at plotting burglaries and thefts.

Perhaps as a result, she’s rich.

However, she is not a field specialist. Her henchmen and mercenaries are the ones who do the heavy lifting and the technical stuff.

Still, she will be there to coordinate and run diversions.

When a plan comes together

Beyond her big cats, Lynx surround herself with specialists. Her heavy and chemist was one Charles Moo, but she can call on the services of cat burglars, getaway drivers, enforcers, demolitions specialists, etc.. 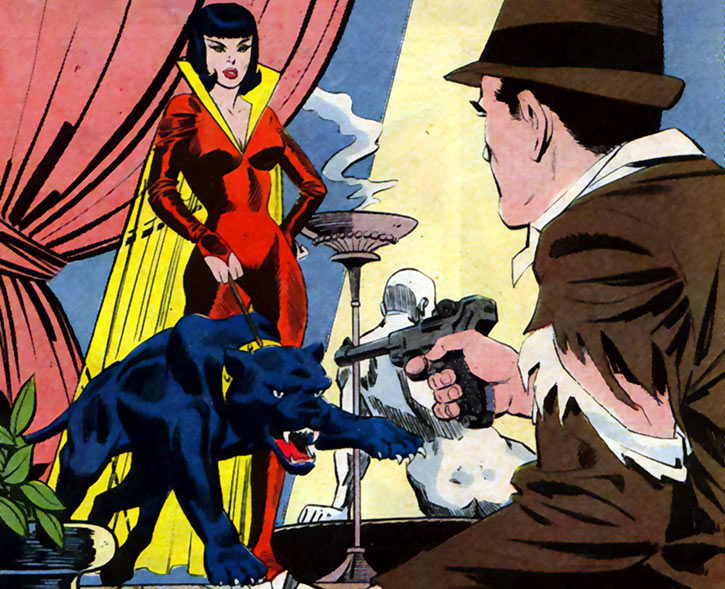 In late 1964, Lynx was already a wealthy, successful and well-connected thief. She owned an island off the coast of Florida.

No longer needing to steal to live in luxury, she nevertheless remained a robber specialising in high-ticket, beautiful objets d’art and jewellery.

Her goal was to stock her Cat Cay estate with all manner of beautiful, refined and sensual things for her to enjoy. Her manor eventually became a sort of museum and art gallery.

Lynx was under investigation by the British authorities. These held a mandate over Cat Cay and nearby islands. But she never gave them an opportunity to make headway with their investigation.

She clashed twice, on successive operations, with Sarge Steel.

The first involved the theft of choice jewellery. The beautiful Lynx drew Sarge Steel (who had been hired as security) into a diversion by flirting with him.

But this was calculated to let him spot a cat burglar. While Steel was busy knocking out the burglar, the *real* crew blew up the vault with nitro.

The jewels were presumably put into plastic bags and fed to Lynx’s pet ocelot. Then everybody just walked out since they had nothing compromising on their person. The ocelot later excreted the bags with the goods.

About a week later Lynx came to the New York World Fair. Coincidentally, Steel was also working security there, as a consultant.

After gassing the armed guards through the air conditioning, Lynx’s men dressed the statue in a hat and large coat.

Then they loaded it on one of the Fair’s little taxi carts as if it were a person riding the cart.

Again with the fist

Sarge Steel spotted them and intervened. But Lynx had her panther attack while Steel was busy dealing with her henchmen.

Steel was knocked out by the cat’s paws, and Lynx and her crew left in a fast hydrofoil.

Sarge Steel struck back by raiding the Cat Cay estate to find evidence. The ex-Special Forces veteran defeated the physical security measures, but was nevertheless spotted.

Lynx went to meet him with her pet panther. But she underestimated Steel, who shot the animal dead.

Lynx pretended that she had fallen in love with him, and started embracing him. But Steel realised at the last second that she was stealing his gun from its holster and stopped her.

Lynx was arrested by the British police. But while she was being transferred to another Cay she jumped from the boat into shark-infested waters. The police assumed that she had died.

Being a particularly capable criminal, Lynx was later mind-controlled into joining an elite cadre of enforcers.

This is how she worked for Mr. Ize, along with Sarge Steel and other mesmerised top operatives.

Like the rest, she fled in some confusion as soon as she retrieved her free will.

Twenty years later, her world (by then designated as Earth-4) was engulfed by the Crisis on the Infinite Earths. Many inhabitants of Earth-4 were merged into the continuity of the New Earth that emerged from the Crisis.

Whether there was a version of Lynx on New Earth is unrevealed.

It is possible that some of the pre-Crisis capers of Catwoman, which wouldn’t make sense for the post-Crisis Catwoman, actually involved Lynx. But this is an unsubstantiated, No-Prize HypothesisA made-up explanation to plug a plot hole.

Perhaps in-universe she’s ¼ Eastern Asian or something along those general lines.

A sultry, smouldering socialite and seductress.

Lynx seems to crave the attention of affluent and famous men, to enjoy being the centre of attention, to flirt and to dress daringly and expensively. How much of this is an act and how much is true is unclear. But it’s probably close to what she really enjoys.

Lynx is also a smart, crafty planner, manipulator and heist artist. As well as a solid leader.

Collecting all sort of beautiful (and odiously expensive) things seem to very important to her. Perhaps pathologically so. That “all that is good and beautiful” be in her vast home was something that she got agitated about.

She seemed to consider that the world outside her gates was full of barbaric and ugly things and people.

“Well, if it isn’t he handsome Mr. Steel ! Should I feel flattered or am I, as gentlemen in your profession say, under surveillance ?”

“I worship beauty… and beauty comes to me from many places ! And what is the one thing created by man which is more beautiful that any other work of art ?” (starts plotting the theft of a famous statue)

“You came here to destroy all that is good and beautiful on Cat Cay ! You are a barbarian ! I hate you !”

Lynx’s Cat Cay estate is heavily secured – about 7 APs of Security Systems.. There are : 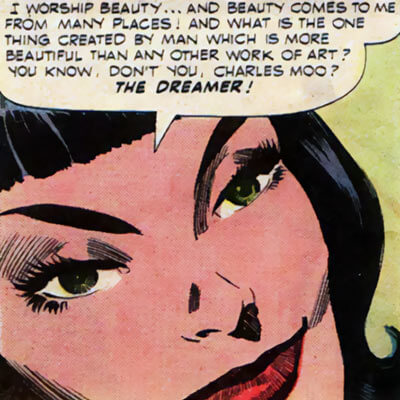 Lynx’s pet panther seems to be particularly dangerous, and presumably has been trained to fight. It can pounce silently and quickly, and can be ordered either to bite (Killing Combat) or to slam somebody on the head with its paws (Bashing combat).

One of the pet black panthers was named Midnight, but was shot dead by Sarge Steel.

Lynx also owns a pet ocelot (which is presumably less dangerous than the panther), and perhaps a few other pet big cats.

At one point, Lynx dipped the claws of one of her cats in curare. This would give the cat Poison touch: 05 or 06, which can be Combined with its base EV from STR. Presumably it has an Ammo, perhaps 02 or 03.

The specialists That Lynx hires for her jobs generally have their key Skill at about 5 APs.