Blitzkrieg is a giant of a man, and his physique seems superhuman. He’s superhumanly strong and tough, and his power level is markedly above that of nearly everybody in Steel Harbor. He likely can single-handedly take on the Wolf Gang or the Prime Movers and prevail.

Keep in mind that Steel Harbor superhumans are generally very much on a street level, though. When confronted by alpha-class superhumans such as Motorhead or Titan, Mace is a lightweight.

Barb Wire described Mace as being able to “crush a M1 tank like a beer can, smoke a turbo ’vette, and shrug off a direct hit from a howitzer”. Though some exaggeration was involved, he doesn’t seem to be too far from those levels. 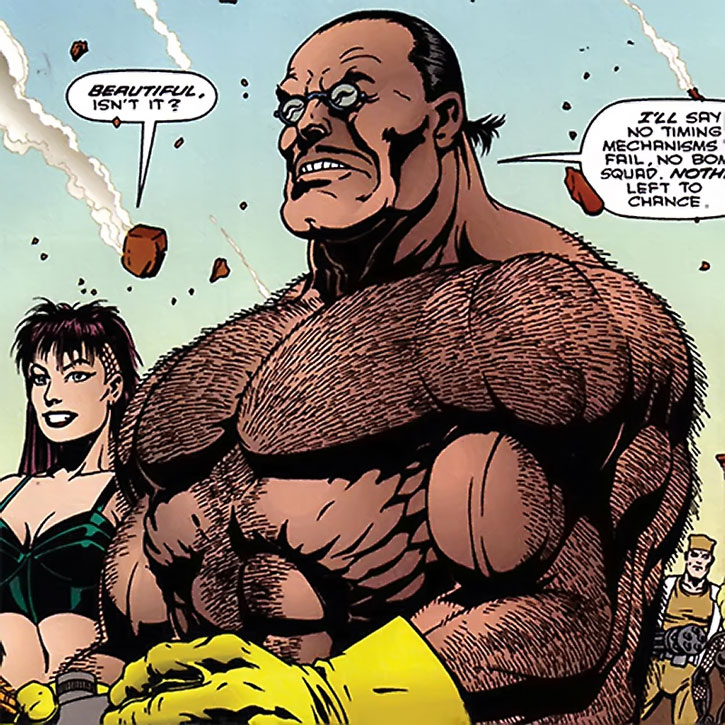 Mace has his own gang, just like all the Prime Movers OGs. He seems to have actual, formal training in hand-to-hand combat.

During the 2010s, Mace avoids getting physical and indicates that he’s older and respectable now. This is probably just talk – it is likely that he’s as powerful as ever. 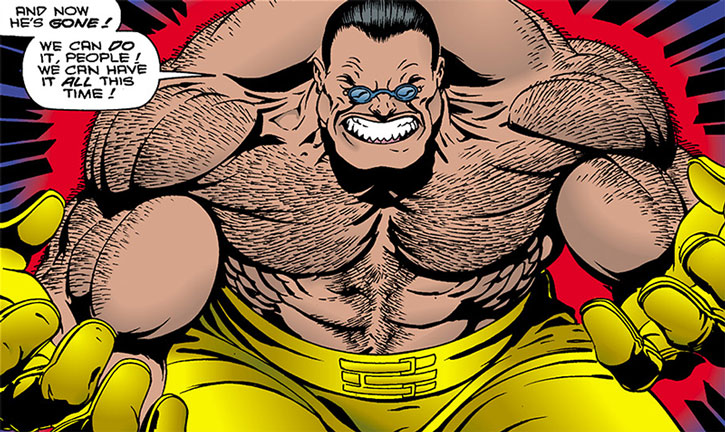 Mace is huge and imposing. He usually goes bare-chested, but sometimes wears a bright yellow muscle shirt instead.

Mace usually affects a sh*t-eating grin that most people find very annoying. But it’s also intimidating and does give him an edge in social friction. He’s nearly always smiling. 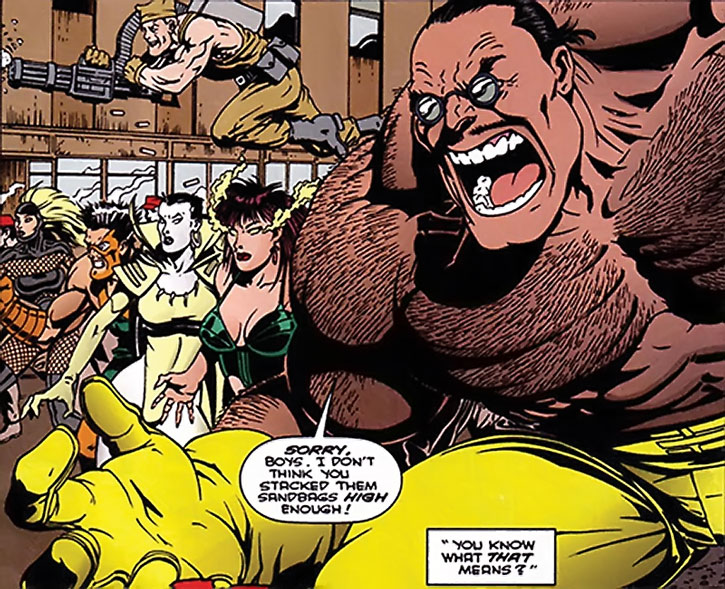 Originally Mace was always going bare-chested. By 1996 or so he started wearing yellow muscle shirts, and perhaps some sort of vest. By the 2010s, he had abandoned his yellow outfit and went for the sort of clothing you’d expect from a gang leader who’s become affluent but keeps it real. That usually means dark clothing and some sort of good-looking hat.

Mace is much more than a mountain of muscle. He’s a smart and observant leader, a good strategist, and a shrewd planner and manager. He keeps building up his power base and making bids for that next level, betting that society around him is in a sufficiently bad shape to accept a superhuman warlord in its midst.

His plans so far have chiefly been foiled by running into monstrously powerful players like Motorhead and Titan. That made Mace more wary than he was in his youth.

Mace is backed by unknown interests (apparently represented by lawyer Mesmerisation Eclipse). However, he makes it clear that he’s the commander in the field and takes the executable decisions. This independence may have been what motivated the whole plot executed by Deathcard II, as Mace may have become a hindrance for these interests.

Mace, as he gets older, operates more as a don than as a street gang leader. He runs a business, not a band of drunken chavs. He is entirely willing to consider alliances and negotiations to keep on top of the Steel Harbor politics.

It is clear, though, that Mace rules via fear and intimidation, hinging on his own enormous strength. This is the only language that will keep his troops and his lieutenants in order. And he’s definitely the Movers’s best asset in taking territory and taking out opponents.

In the Steel Harbor context it is possible to fight against other superhuman OGs, but not against Mace.

Blitzkrieg obviously enjoys fighting and demonstrating his might. The experience puts him in a jolly mood. Just knowing that he’s the big man and the shrewdest operator in the room often gives him a good disposition. Which of course reinforces the message of menace.

Running into somebody more powerful than he is, on the other hand, triggers a mix or range, jealousy, resentment and fear. It’s obviously an experience he doesn’t deal well with.

Blitzkrieg comes across as being somewhat paranoid… but each time, he was dead right about his suspicions.

In his Ace of Spades appearance Mace was more confident, more relaxed, more experienced and more prone to sarcasm. He also started occasionally referring to himself at the third person as a weird joke, using more Mexican Spanish words, and enjoying more luxuries such as good liquor and cigars. 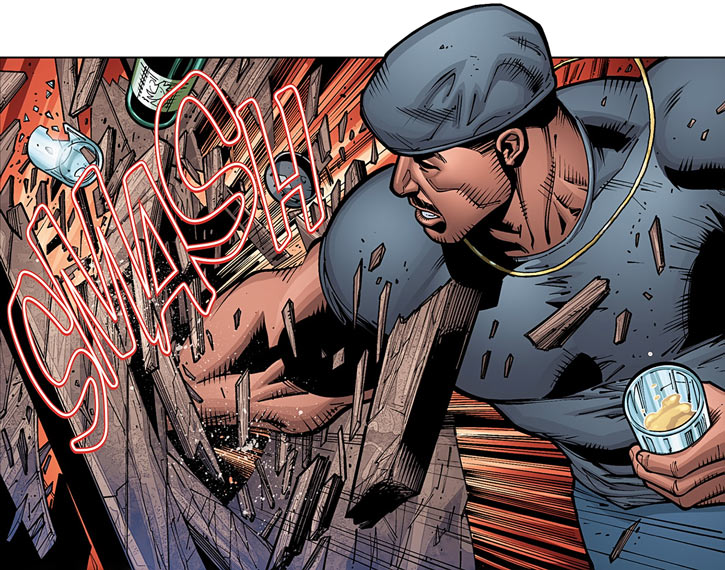 By the 2010s he’s even more strongly into his image as a smooth Hispanophone operator, bon vivant and man who can afford to act friendly and debonair given his power. He runs his turf and gang shrewdly as a Mayor of a sort. Mace is more competent than ever at power plays.

Though Barb Wire and Hunter clearly dislike him, he insists upon acting as if he were their friend. He buys them drinks and deals in a somewhat fair way with them. He also often flirts with Barb Wire and calls Hunter his brother, though both are clearly an affectation.

“Times change. This world is changing. People like us make change, Hunter. I’ve asked before, and I’ll ask one last time. With your crew added to mine, nobody can stop us – not the government, not the big shots from Golden City — nobody. This can be our time. Now and forever.”

“Thing is, I don’t trust the phone lines, Killerwatt. Never know who might be listening. Maybe I seen one too many Mission Impossible reruns.” (the phone lines are indeed being monitored) 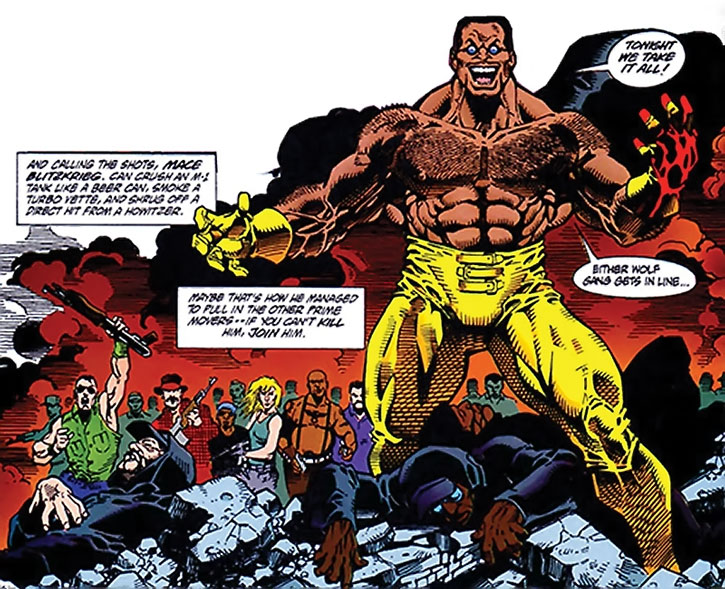 “They probably be all plotting against me. Think they can take me down after the way that Fletcher dude handled me. Let ’em try. They’ll see Mace Blitzkrieg is still more ’n a match for any and all of them.”

“I hope you got dental records, sonny.”

(Making an obviously sarcastic show of being the bigger man whilst on neutral turf) “Get with the program, carnal. This is a new age of brotherhood and understanding. This is the United Nations of the street gangs, baby. We’re on sacred ground.” (beat) “Enjoy it while it lasts, chico.” (beat, cranks the sarcasm even higher) “Our table is waiting – we go. We drink to harmony. Thanks for your patience, Barbara. Drinks for all my Wolf Gang friends — compliments of Mace Blitzkrieg !”

(Threatening softly) “The crews are getting restless, looking for recompense. Once they start, it’s hard to make them stop, you know ?”

“¡ Saludos, amigos ! You had a busy night, verdad ? I am relieved to see you all unharmed. We will take it from here.”

“I like you, Barbara. I help you out. You are forgiven for arresting my soldiers. Go and sin no more.” (To his gang) “Listen to me : No vendettas against Barb Wire and her associates. Clean slate, entendido ? Jovial companions make this dull life tolerable.” (To Barb Wire) “The scale, she is balanced no, no ? Everybody is so happy. Well, I’m happy… and that’s good for you, too.” 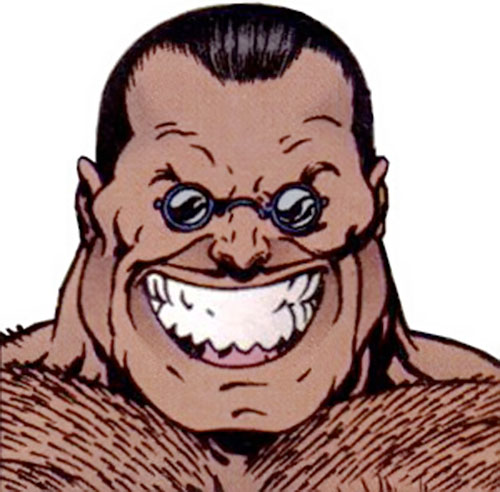 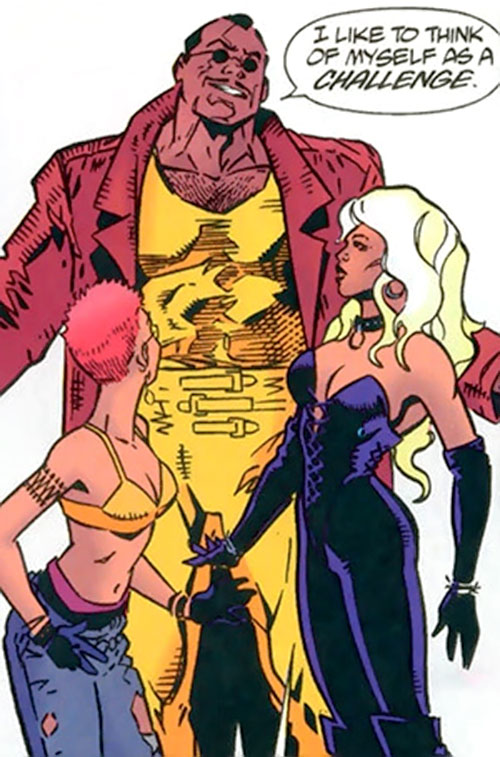 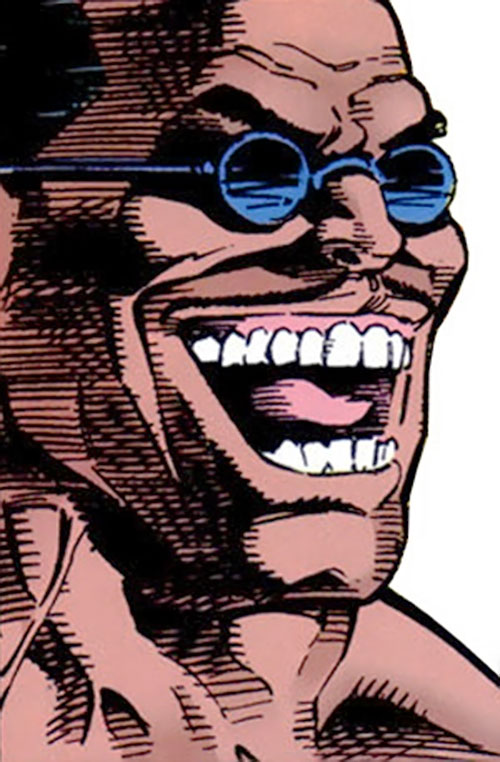 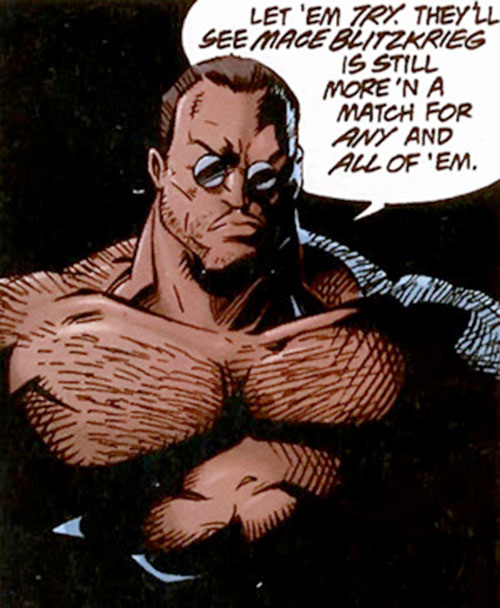 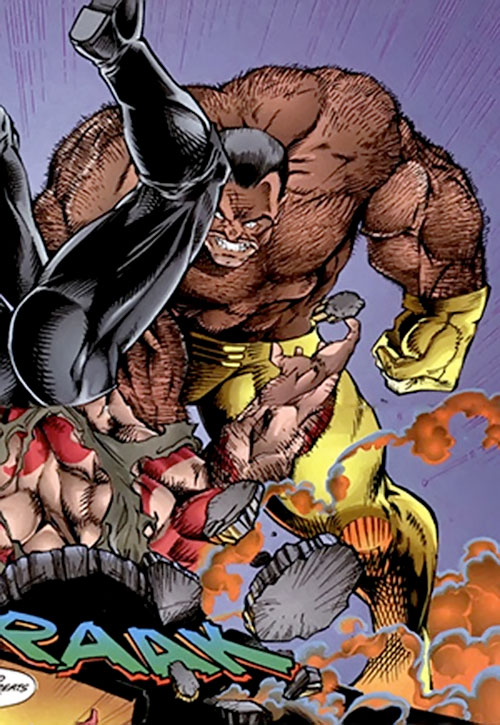 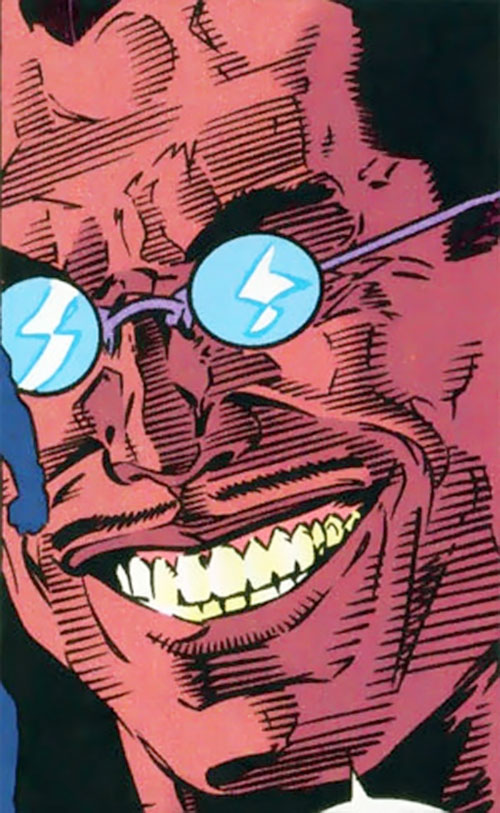 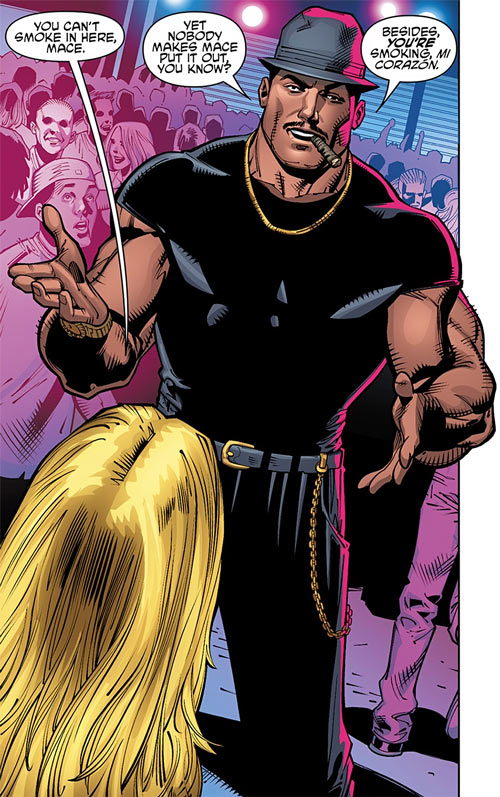 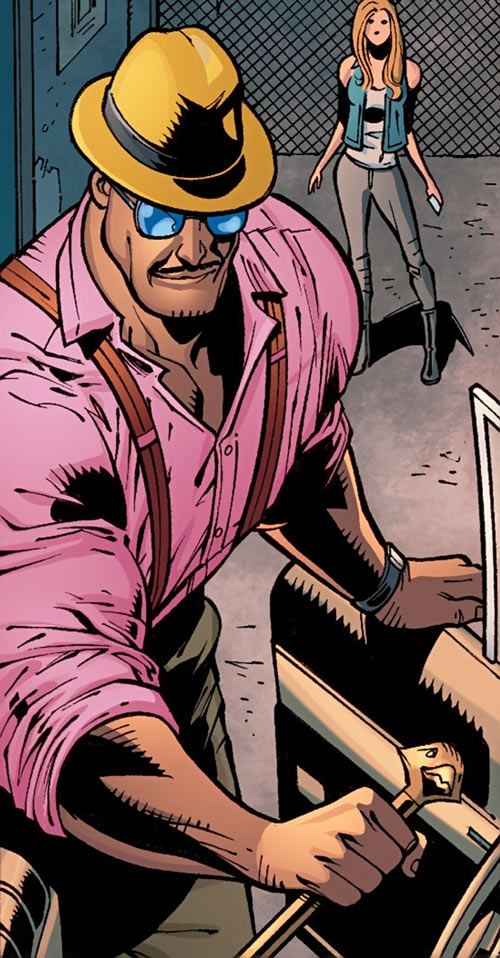