Mace seems to have the strength, stamina and speed of a human in near-peak form.

He uses a large spiked ball and chain, effortlessly with seemingly superhuman strength and accuracy, and so is capable of bringing down powerful metahumans.

Fighting and winning is all that Mace is about.

The veteran hero Super-Tough had a fairly successful career in the city of Chicago. He worked with a sidekick, Young-Tough. The duo battled a number of villains with their main nemesis Damien DarkLord, a time-travelling mastermind.

Around 1980, the heroes had their final confrontation with their enemy. It ended with the detonation of a Nega Bomb. Super-Tough and Damien DarkLord disappeared in the explosion, leaving the teenaged Young-Tough alone.

In the aftermath of the Nega Bomb detonation, Young-Tough was taken to Hillman Hospital. He was treated for extensive scarring on the upper part of his face. This disfigurement ruled the hero out of eventual membership of the United States’ superhero team, Youngblood. This media-friendly operation prided itself on having attractive members.

Disillusioned and bitter, Young-Tough eventually sunk into insanity. He became the merciless vigilante Mace. Using a ferocious ball-and-chain, Mace severely beat the Shrew. From there he eliminated 30 members of the criminal Vicious Circle, one at a time.

His actions prompted OverLord to send one of his agents, Bad Axe, to recruit the new hero. But Mace took Bad Axe out with merciless blows that would have killed him if officer Alex Wilde had not arrived on the scene.

Mace proved his ability by doing what no other hero could do. He took down the possessed Dragon while he was under the influence of Horde. Once he was back in control of his mind, Dragon knocked out the vigilante to answer for his crimes. Mace was thus sent to Stronghold Prison.

Months later, CyberFace caused a prison riot while seizing control of the Vicious Circle. Mace located the OverLord armor and attempted to use it to escape and resume his crusade. Unfortunately, the weapon had been built so that only the original host could operate it. As a result, Mace’s brain was fried.

Over a year later, Horde awakened Mace. He used him to try and eliminate the rebellious CyberFace. Upon his liberation from Dragon, Mace was sent back to prison where he was visited by his former lover, Super-Tough. Following this visit, the government’s Special Operations Strikeforce chose him for membership where he served for a few weeks.

While guarding an homophobic author, Mace went rogue and murdered his charge. He then resumed his vigilante career where and was recruited by OverLord II, who lied to him about Dragon killing his old partner.

Dragon managed to eliminate OverLord II and apprehend his minions. Mace was sent back to prison and has yet to be seen since. 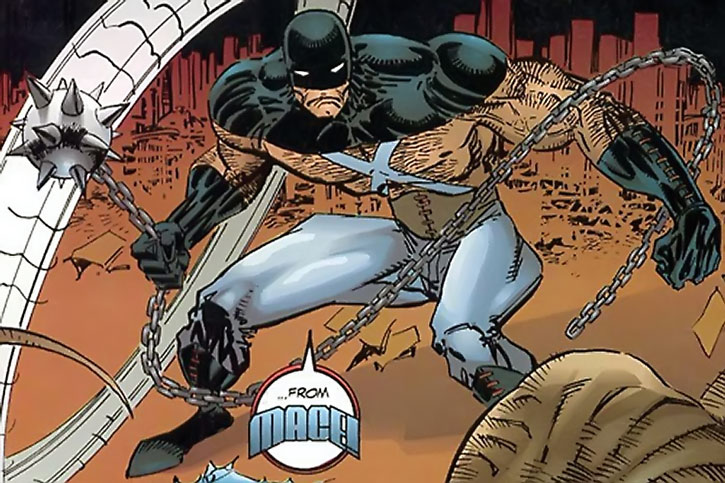 The appearance is that of a super-powered executioner. He attacks his foes with a grim demeanor, hard words and a swinging ball and chain.

He does appears to be superhumanly strong and has an almost overdeveloped upper body muscularity. He has likely spent the last twenty years or so training, while using steroids.

In his young years, during his Young-Tough identity, he was a cheerful and heroic lad. His former mentor and lover called him sweet, sensitive and beautiful. Young-Tough was meant to grow up to become the next Super-Tough. He was supposed to receive Youngblood training to complete this dream. 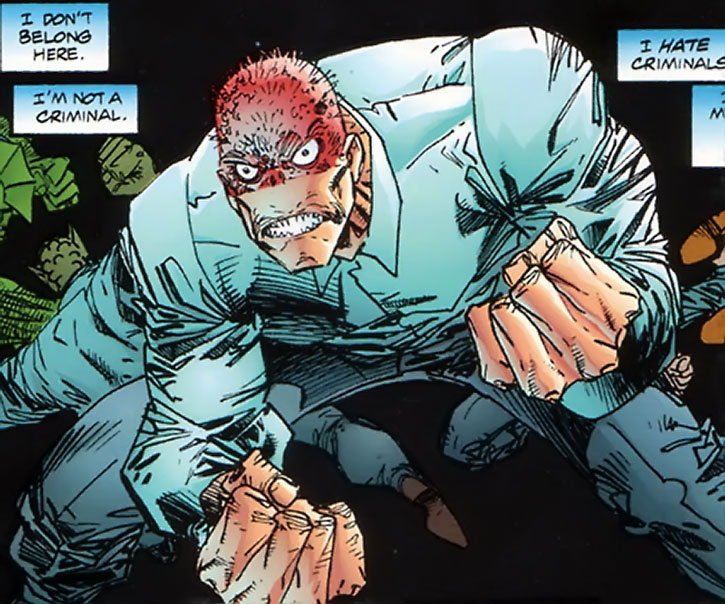 But as his good looks were destroyed, in the nega-bomb explosion, so were his dreams.

He was deeply traumatized by the loss, the apparent death of Super-Tough and Youngblood turning down his membership. He only had the fight for justice left and his scarred psyche took it much too far, to beyond the point of no return. He is the prime example of a heroic sidekick taking all the wrong turns.

Adopting a new identity, the ruthless vigilante Mace was born and there was no turning back.

Mace hates attractive, popular heroes to some degree. For example, when he fought the mind-controlled Dragon, he accused him of being unable to cope with all the fame and popularity. This is a reference to his lost dreams about Youngblood and his hate for his current state. 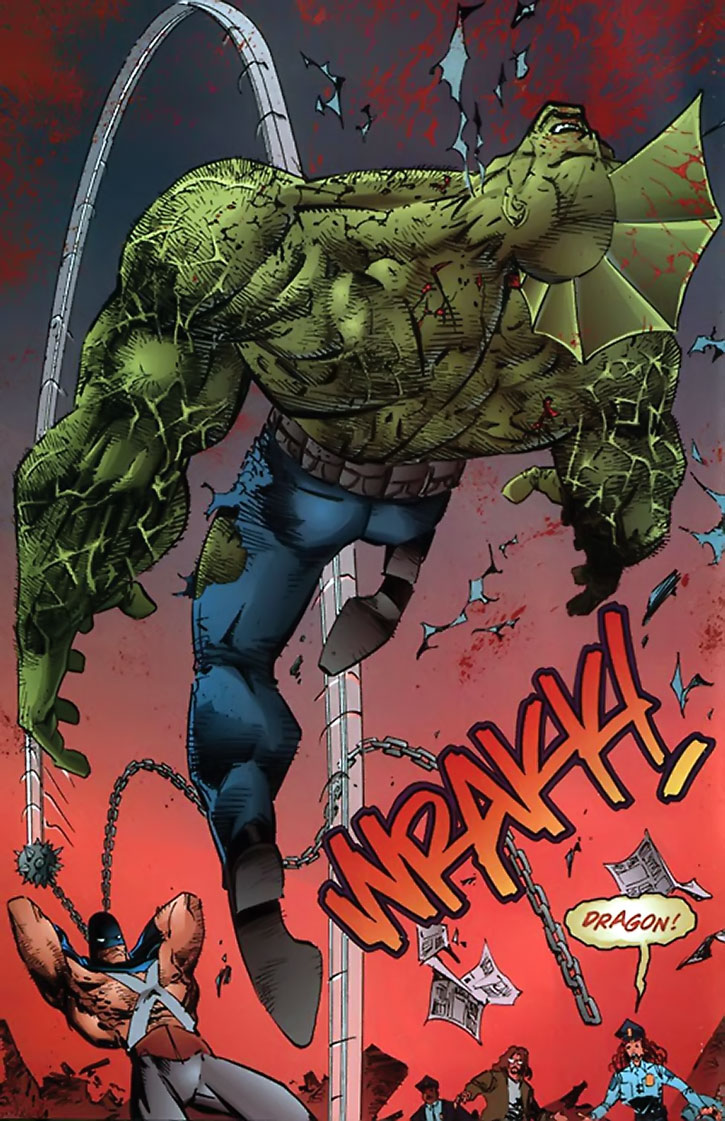 Mace appears to be a sadistic vigilante who viciously attacks supervillains. His savage methods and use of ultraviolence are very effective. As a result, he actually tends to get a lot of public support for his illegal actions. He has brought low many a supervillain and will, without remorse, go after anyone he considers a villain, super-powered or not.

He is not a chatty-cat, but prefers to let actions speak for themselves. In most cases he will slay his enemies. While in combat, he will spend so many Hero Points  that he appears to be superhuman.

Mace really hates criminals and will normally not be associated with them in any way. Feeling fully capable of dealing with any and all enemies himself, he will not ally with the law-enforcement agencies either.

It is likely that he does not trust anyone but himself. The only person he really cares about is his former mentor and lover Super-Tough, whom he thought dead for so many years, and for whom he would seemingly do anything.

However, Mace has always wanted to belong ever since his days as Young-Tough. He is still looking for his place in the grand design. It is possible to gain him as a temporal ally by appealing to this wish, and to present it as if they can fight for a better world more effectively that way. He will also listen if one appeals to his history with Super-Tough.

He is eager enough to join a cause that he will swallow huge lies (by a Bluff maneuver, in DC Heroes terms). Howbeit the talker still needs to score full RAPs in a Persuasion attempt, also taking into consideration Difficulty modifiers, for this to work.

Mace can be persuaded to act as a champion of either villainy or the law, but eventually he becomes his own man again. He is too violent to work with the law, and too hateful of criminals to work with them for too long. He thus has Connections on both sides of the law. Simply put, his vindicative behavior means don’t trust this guy.

Curiously, Mace seems to relax a bit when teamed up, fighting less effectively then, and, in game terms, spending less Hero Points on his actions.

“If you’re from the Vicious Circle… you can just keep walkin’. I’m fightin’ to take back the city for the common man. I won’t be joinin’ up with the likes of you. Not now. Not ever.”

“Those fruitcakes talk a good fight — it’s time a real man shows them how it’s done.”

Equipment:
Ball and chain [BODY 10, EV 04 (07 w/STR, 11 w/Martial Artist), Stretching: 02, Note: This metallic spiked ball is attached to a long chain which Mace uses as handle. The chain is around 2 APs long, which often allows Mace to attack his opponent first at a distance. All attacks made using this weapon are, no doubt, Killing Combat]. 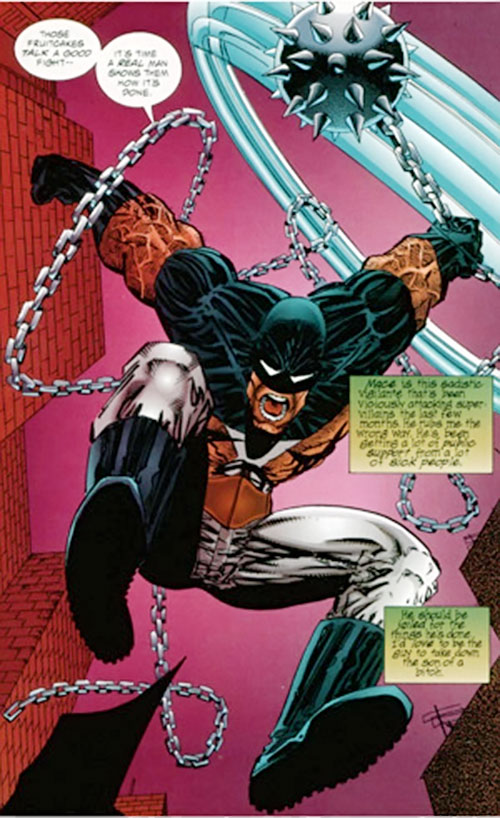 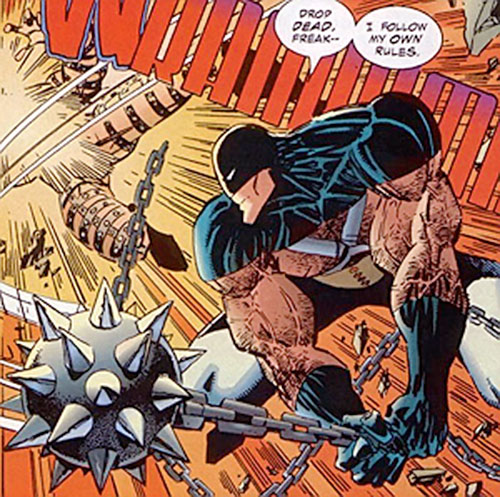 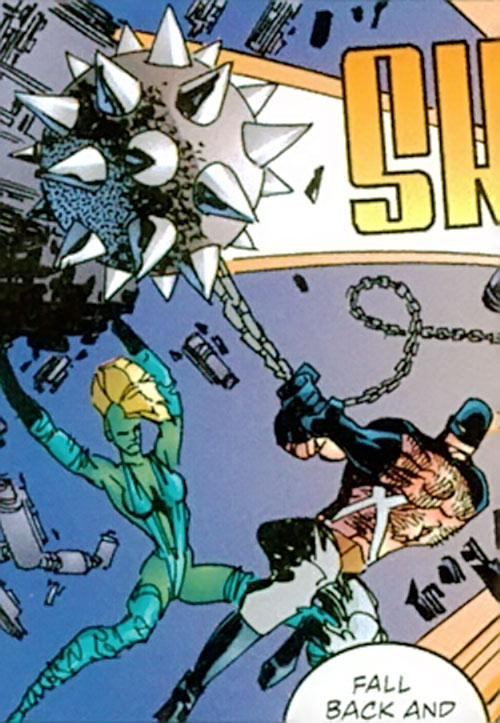 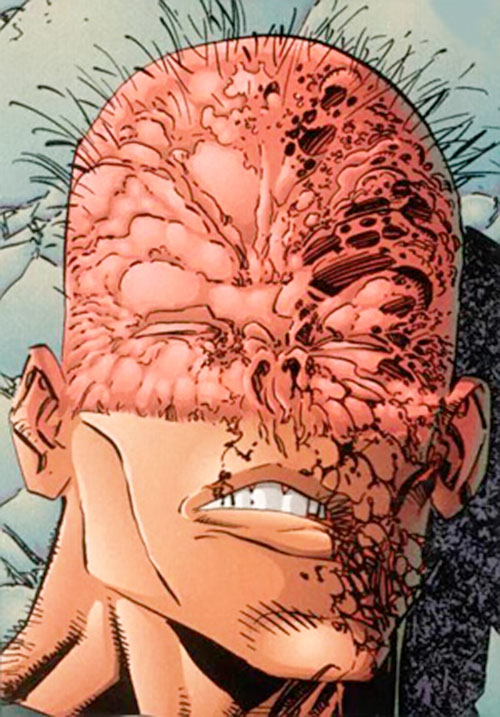 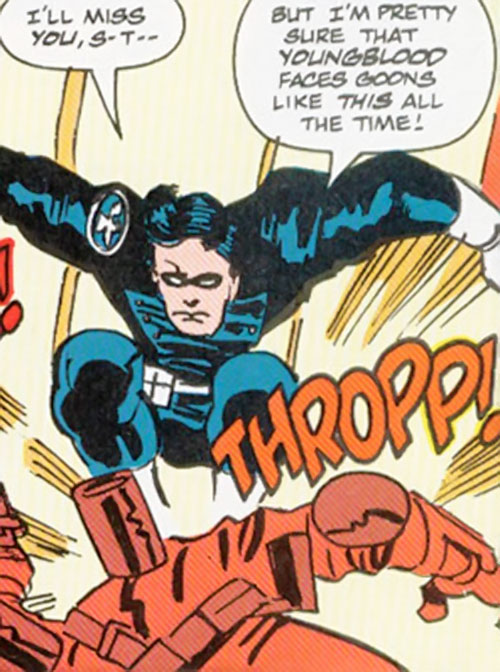 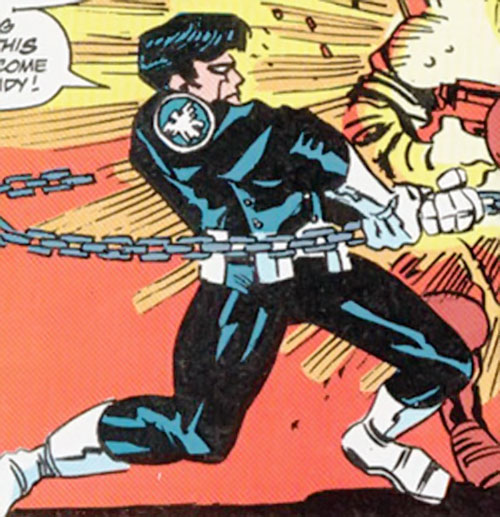