Jenkin’s Mach armor, built with the help of the Fixer, makes him a one-man jet fighter. It also takes him back to his roots as an aircraft mechanic.

His on-board weaponry include flight and weaponry computers, machineguns (with anti-riot payload), mini-missiles and a grenade launcher whose payload can be quite varied (flash, gas, high explosive…)

Abner Jenkins was a master mechanic at Precision Aircraft Parts of Queens, New York for seven years. Bored with his job, he tried to interest the company in a set of plans for some new innovative hydraulic technology he’d created. These would allow him to create a personal flying suit.

He was ignored by his superiors due to his lack of an engineering degree. Despondent over the lack of respect they showed him, he used his plans as the basis for his first Beetle armor.

He turned to crime in hopes of winning the fame, wealth, and thrills denied him at work. His first super powered opponent was the Human Torch, but he became a perennial foe of both Daredevil and Spider-Man.

Later in his career he frequently allied himself with other super-criminals, both in the Masters of Evil III and the Sinister Syndicate. While with the third masters he first met Moonstone, who would later become a fellow Thunderbolt.

Loosing every single fight against a superhuman opponent, he sought safety in numbers and worked for Justin Hammer as an enforcer. Due to his failures as a squad leader he made enemies of several other super villains, such as Boomerang and Rhino. Since that time, Jenkins became increasingly upset with his failure to achieve success in his new career.

A hard blow was the destruction of both the first and second generation Beetle suits by Iron Man (the first during Stark’s onslaught against Hammer, the second during the Armor Wars).

Abe was approached by Baron Zemo II to become part of his Thunderbolts scheme. Thus did he become the mysterious, high tech hero MACH-1. His armor was reworked, turning it into the MACH-1 armour, with the considerable assistance of Techno. 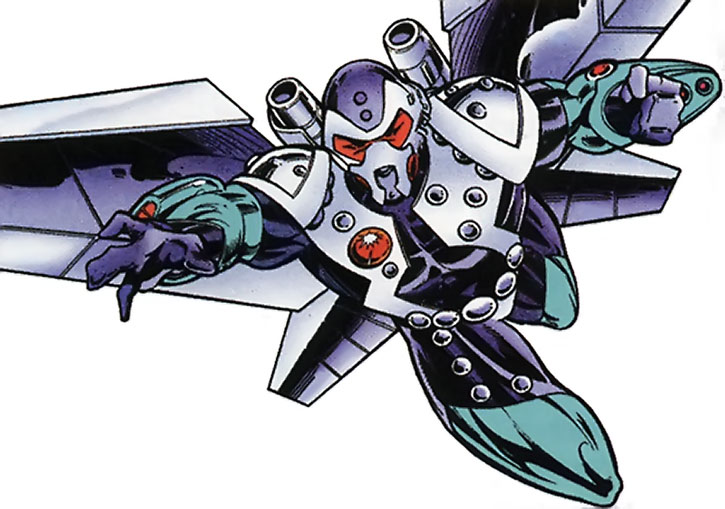 As MACH-1, which stands for Mobile Armored Cyber-Harness, he’s capable of high-speed flight and manoeuvrability. He also has a wide variety of on-board sensors, communications equipment and weaponry, including machine guns, missile launchers, and gas grenades. His armour is very manoeuvrable and capable of high speed flight.

After spending a good deal of time with her, Abe started a romance with fellow Thunderbolt Songbird. Abe sided with most of the other Thunderbolts when they rebelled against Zemo and became real heroes.

With Hawkeye now leading the Thunderbolts, Abe was asked to turn himself in to do time for a murder he had committed as the Beetle. Thus, he is currently serving time in Seagate prison. While there he foiled a prison break masterminded by Justin Hammer and involving the Rhino, Boomerang and Whirlwind.

The Mach I armor is quite different from both Beetle armors. It is deep blue and nearly skin-tight, with a big jetpack, deployable rigid wings, weapon modules on the arms and white, spiked armor plates on the chest. The helmet is reminiscent of a hi-tech fighter pilot’s, with a red visor.

Jenkins is now mostly about redeeming himself and becoming a better, stronger man. Like most Thunderbolts, he lacks in self-esteem (but Moonstone has enough self-esteem to compensate for all of them, so it’s okay (-: ). His failure as a squad leader for Hammer make him extremely reluctant toward any leadership role.

He truly loves the psychologically fragile Songbird, and this relationship plays a big role in his redemption.

’’…and that building over there, Spider-Man kicked my can pretty good over there… and there, that narrow building, Daredevil clobbered me over there…‘‘ 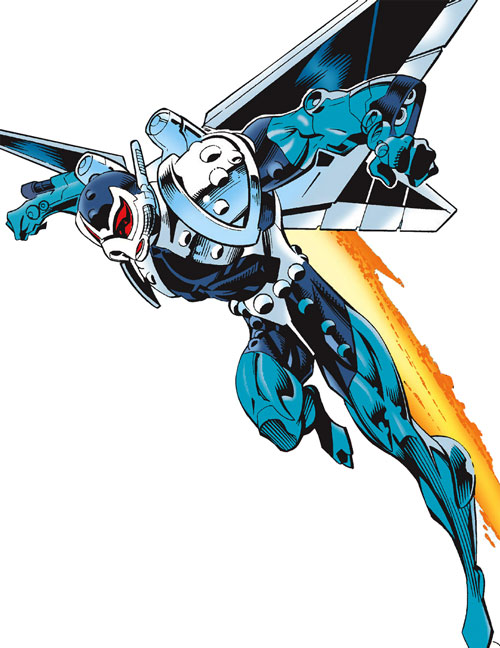 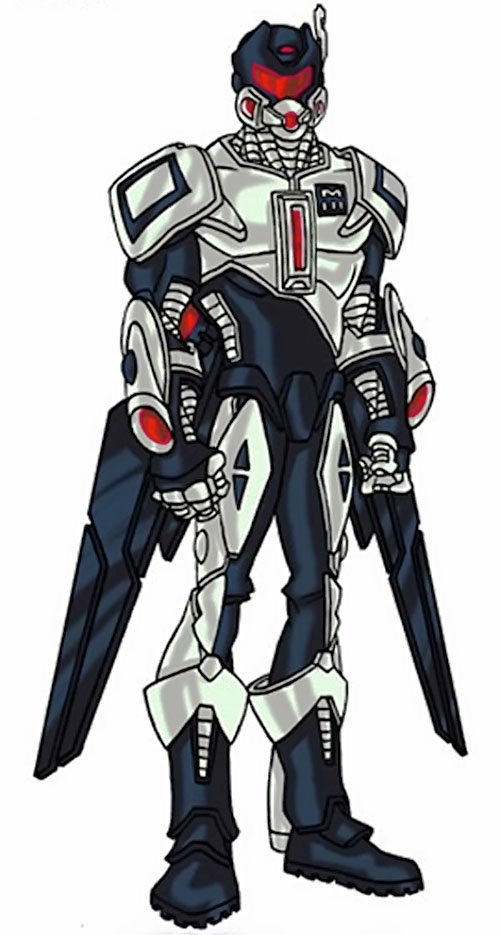