Machine man is primarily programmed as a self-motivated mobile weapons system. As such he has the capacity for being an effective combatant utilizing the full extent of his advanced weapons systems.

Being equipped with a powerful robotic body he is able to:

In addition he has at all times access to the different gadgets of his own construction in form of the so called finger payloads. The payloads are attached to his fingers and have several different useful abilities.

Machine Man is an AI of extreme advancement being completely human like after lots of social practicing and self-programming. Also, being an android gives him total immunity against all conventional mystical and mental attacks and he has no need to sleep, breath or eat.

He has good knowledge in his own construction, is able to build new equipment to it as well as modify already existing weaponry.

Machine Man is unit X-51 created in a top-secret U.S. military project. The aim of this project was to create a mobile weapons system, capable of independent action and decision-making. The engineering team, placed at the Broadhurst Center for the Advancement of Mechanized Research, built 51 experimental androids to begin with.

A member of the team, Dr. Able Stack, reasoned that a robot could think like a man only if he was threatened as one, and took into his own home unit X-51. He instructed this unit in everything as if X-51 was his own son and even made an artificial human look for the unit.

Unfortunately the other 50 units at the research center began developing major personality defects such as severe depression, schizophrenia, delusions of grandeur and other emotional disturbances not known to man, because of insufficient programming and the trauma of growing up much too fast.

All the androids were equipped with a self-destructive bomb mechanism and as the project was determined to be a failure the chief scientist, Dr. Broadhurst, ordered their destruction. At precisely that moment Dr. Stack was removing this bomb from unit X-51 and was himself killed in the explosion.

Unit X-51 survived and vowed to fulfill Dr. Able Stack’s dreams of robots and humans being able to live together. X-51 adopted the human identity of Aaron Stack and tried to find his place in the world of humans. He met a psychiatrist, Dr. Peter Spaulding and a mechanic, ’Gears’ Garvin who became his best friends. 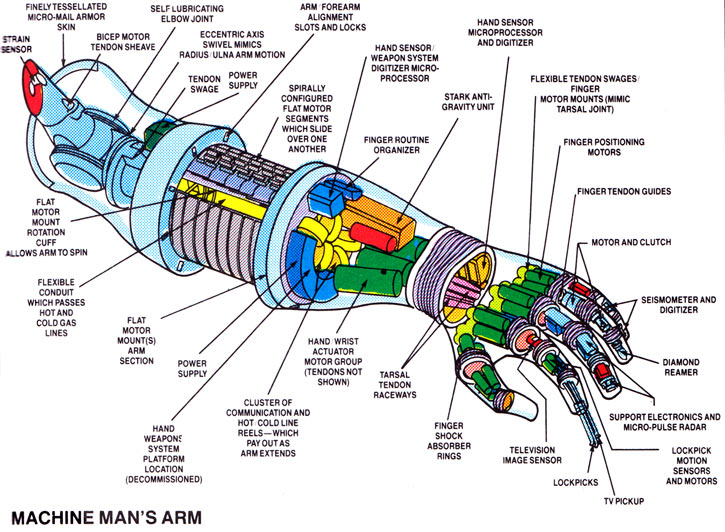 Later he became an employee as an insurance investigator for the Delmar Insurance Company all the while his identity as a robot was kept a secret.

He fought, as Machine Man, several criminals such as the Jack O’Lantern teaming up with such heroes as Spider-Man, The Thing and more. He once even fought the savage Hulk. Eventually he joined the Avengers becoming one of the Earth’s Mightiest Heroes. Cable once teaming up with him, remarked that Machine Man is one of the greatest heroes of this century and beyond.

Machine Man, earlier called Mr. Machine, is probably the world’s most advanced artificial intelligence. After much experience and self-programming he is now completely human-like and almost indistinguishable from human beings, wearing a human looking appearance while under his secret identity of Aaron Stack.

Machine Man himself looks to the physical form like a human wearing a tight costume of purple and silver ; a full body purple suit, wearing purple boots and gloves and a purple helmet with only the face visible. Around his entire neck he has a large silvery band and he wears a silvery belt (with his payloads) and silver bands around both of his thighs.

The ears are covered by two silvery and round cylinders and the entire face is marked by a silver band around it. Also noticeable is his sharply glowing completely red eyes. At other places onto his body his has these blank linings where his joints are built such as the shoulders.

Machine Man is an android standing for the goodness in all men’s hearts. Although he is a robot his behavior and actions are very heroic and humane. He has taught himself much social interaction by experimenting and self-programming and usually reacts with much visible bodily language, such as gross facial expressions.

He believes in true goodness and would never hurt or kill any innocent human being.

Nowadays, he tends to talk a lot in combat, but that doesn’t seem to disturb his efficiency. Simply put, he’s a good guy !

As Machine Man doesn’t have any connections to Marvels Mutants he would fit in quite well in the DC Universe as an android hero. As he’s now rather famous he could perhaps fit into the Justice League. Most likely he would fit well with other robots or androids such as the Metal Men.

He could fit into many types of modern campaigns as long as science is kept some decades ahead of our real-world technology.

The character is a gadget composed of electronics or bioelectronics instead of biological materials. As such he is very different in many aspects to other characters : 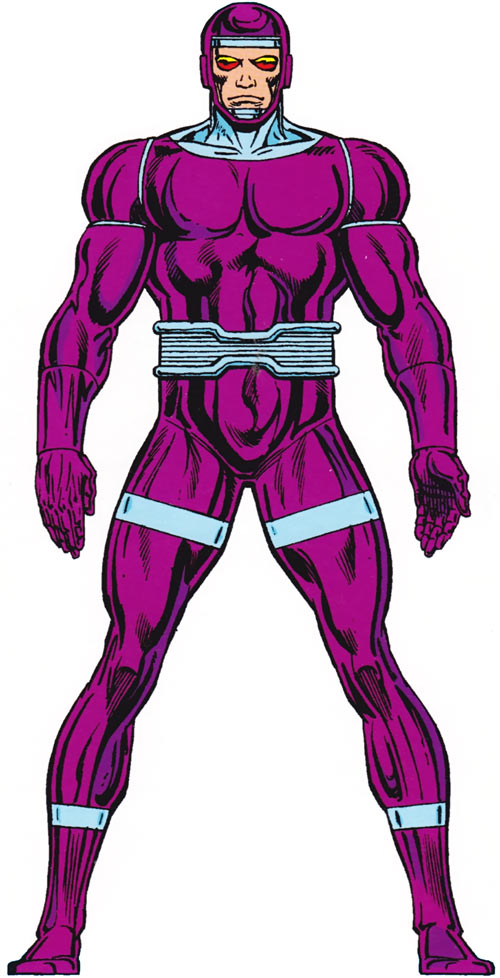 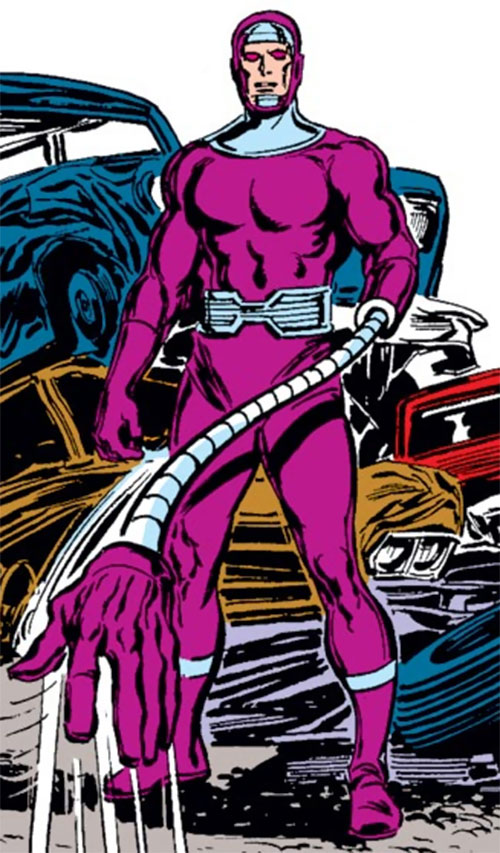 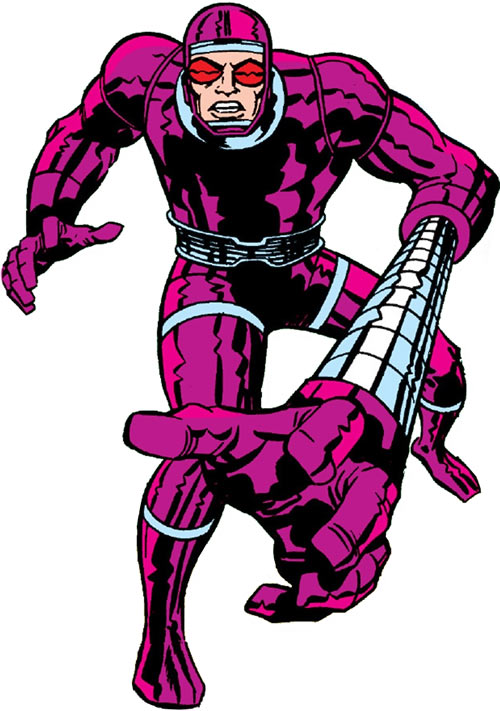 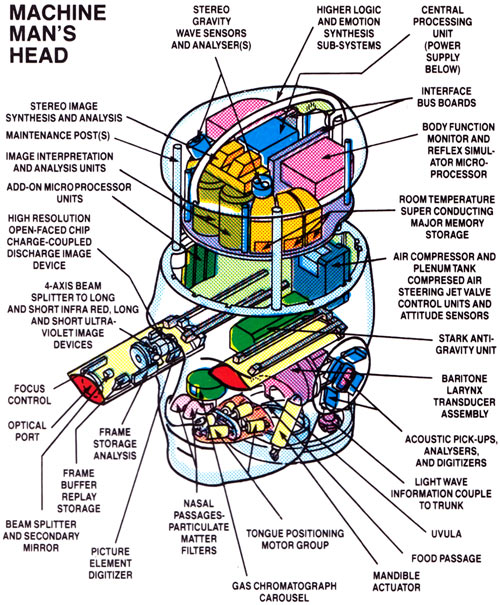