Macon is a vastly experienced military man and mercenary. As such he possesses knowledge in many different skills including sniping, unarmed combat, piloting, sneaking and tracking. His overall effectiveness is greatly increased by his various cyborg abilities. The enhancements done on him give him superhuman durability.

Also installed are various detection abilities such as thermal sight and radar. His inbuilt visor provides him with effective resistance towards flare attacks. During his days as a Hellfire Commando he was imbued with a permanent mental block against various psionics by Emma Frost.

His greatest assets are probably his physical toughness, ruthlessness and professional attitude.

Nothing is known about Macon’s early history, except that he used to be in the military. At some point he ended up working as a Hellfire Commando, who’s the elite forces and security guards of the nefarious Hellfire Club.

Wolverine seriously mauled a dozen Hellfire mercenaries, Macon being among them. The Hellfire Club reconstructed them with high-efficiency prosthetics. These mercenaries felt a great hatred towards the X-Man for what he had done to them. Macon worked for the Hellfire Club some more time after that and met Wolverine again.

Along three cyborg friends, Cole, Reese and Arnold, whom he probably knew since his military days, he worked alongside Lady Deathstrike in order to kill Wolverine. The attempt failed and Arnold was killed. For the rest of his history, see the Reese write-up.

Macon is supposed to have been killed by the Sentinel attack sent on Donald Pierce, by the notorious Trevor “Chronomancer” Fitzroy, but that fact remains to be seen. Since Pierce and Skullbuster had survived, so might also have some of the other Reavers. In any case, the group of the Reavers is now defunct since the leaders have left to follow other pursuits.

Macon is a muscular man of unspecified ehtnicity and skin colour, with crew-cut purple (!) or brown hair, and brown eyes. He, like the other old Hellfire Commandos, appears to wear a helmet and other technical equipment, but, in fact, all of it is built into his cyborg body. On his bare skin are clearly visible circuits and connections.

Immediately beneath the skin is a tough metallic alloy, which becomes visible when he’s damaged. Covering his body is a military camouflage uniform or commando trousers and a vest along heavy boots. While at work, he moves in strict military manners while securing the area from enemy activity.

Macon is a professional military man and is accustomed to hard jobs and serious situations. He’s an able team player, always follows orders and doesn’t nag as much as some other members do. He does, however, nag about how much Cole takes after different movie characters.

Apparently, he loves a soldier’s life and work. In his spare time he likes to drink, discuss/watch movies and play cards, which fits perfectly with the interests of his buddies. Most probably he’s also a womanizer.

He bears the nickname Ducky either since he talks too much or since he’s seen as an able and dodging combatant; perhaps it’s both. Like the rest of the surviving ex-Hellfire Commandos he cares for the safety of his old team-mates, while he’s ruthless and cold against enemies. Like the rest of his old buddies he bears a great hatred towards Wolverine.

His only true buddies nowadays are Reese and Cole, who’ve shared all the mess that he’s been in, and feels total friendship and loyalty to them. Pierce is an able, but feared leader and accomplice.

Like the rest of his buddies he bears a wish, with little hope, of becoming a true human again; this might be used for coercing/persuading him into doing stuff and which is the reason the team works alongside Lady Deathstrike and Pierce. He, like all the Reavers, also seems to enjoy inflicting pain on those who cannot fight back.

“Reese, Arnold is taken out, but I have the target in sight !”

Macon is a cyborg mercenary and thus not big deal in the DC Universe. He’d easily be inserted as is, but his origin has to be connected to some other villainous group, and to some other vigilante.

For example, Macon, alongside buddies, could have been working for Cobra’s Cult when he was mauled by some ruthless vigilante. The tech level also suggests that Macon once was part of Team Luthor. 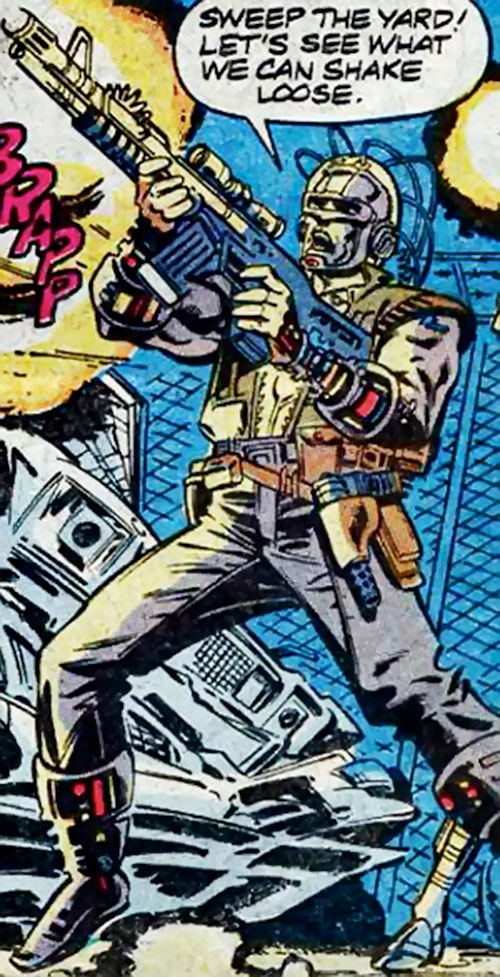 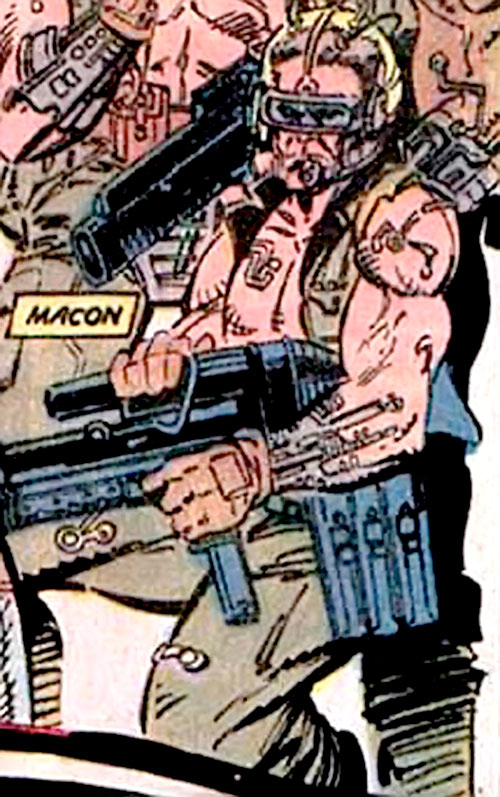 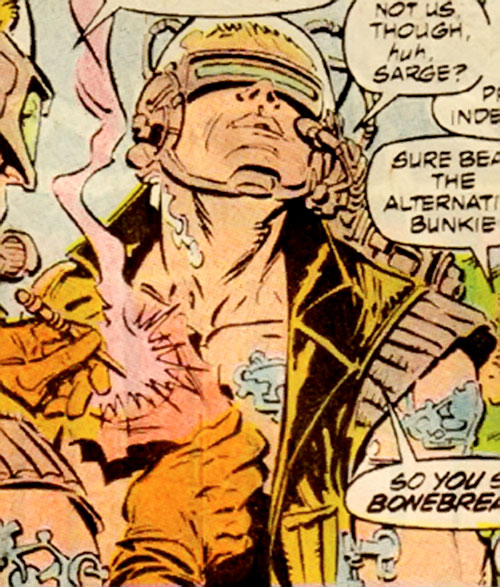